Confirmed for a full season, the honeymoon period is over for Pierre Gasly and Brendon Hartley – and Red Bull pressure is unrelenting 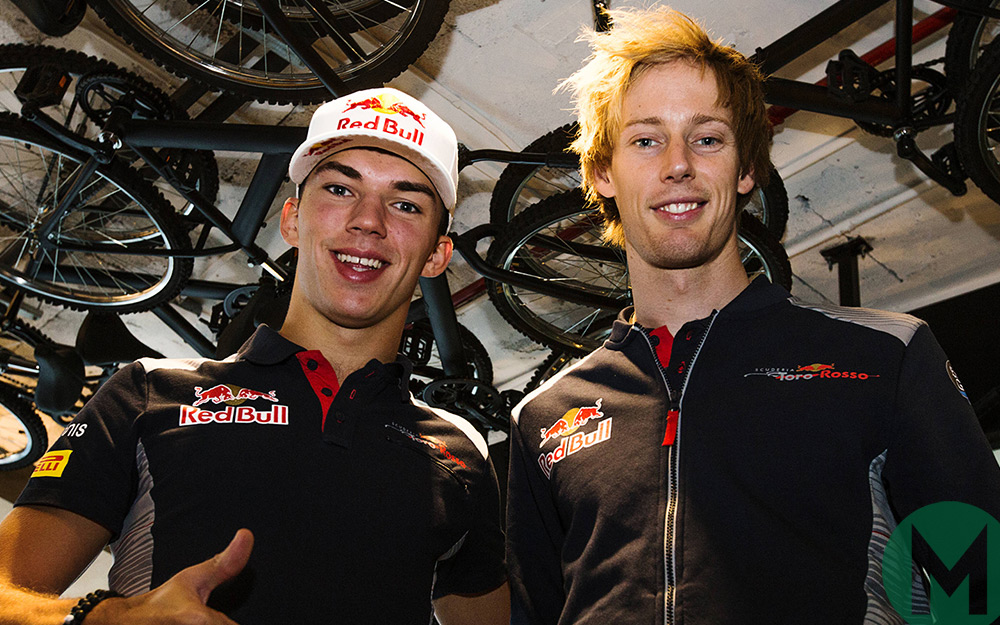 The confirmation of Pierre Gasly and Brendon Hartley at Toro Rosso for next year, continuing the pairing that’s been in place since Mexico this season, is hardly shock news. Since it was confirmed immediately after his race for the team in Austin that Daniil Kvyat was no longer part of the Red Bull junior team, it’s been obvious what the 2018 line-up was going to be. Both have performed well with limited preparation in their late-notice stand-in roles and next season represents a fuller – more prepared – opportunity for both. They will however be under no illusions about the pressure of performance upon them.

Hartley in particular will need no reminding, having been dropped from the Red Bull junior programme mid-season in 2010 when his Formula Renault 3.5 campaign didn’t measure up to what was expected by Dr Helmut Marko. He was being out-performed by team-mate Daniel Ricciardo and was replaced by Jean-Eric Vergne. The Frenchman himself was later released from the programme after three sometimes promising but ultimately unremarkable seasons with Toro Rosso. Vergne’s days were numbered when in 2014 the brave, gifted – and very young – rookie Kvyat regularly out-performed him.

As Vergne was dropped, so Kvyat was promoted to the senior Red Bull team for 2015 in response to Sebastian Vettel’s defection to Ferrari. He got a decent run of results but his underlying speed was rarely a match for Ricciardo – and with Max Verstappen creating something of a sensation as the 17-year-old Toro Rosso rookie, the pressure was very much on. It was spelt out to Kvyat around the time of Suzuka that year that he hadn’t yet done enough to justify retaining the Red Bull seat for 2016. Trying visibly hard from the moment the wheels started turning there, he was fastest of all in the wet of the second practice session, but in qualifying rolled multiple times after getting on the grass approaching a 160mph kink. He was retained for the first few races of ’16 but after a controversial incident in Russia with Vettel’s Ferrari, was demoted back down to Toro Rosso, with Verstappen moving in the opposite direction – and infamously scoring a victory in his first race in what had been Kvyat’s car.

Kvyat took it hard and seemed at times close to a breakdown. He’d perhaps received opportunities before he was truly mentally ready for them. To go into the senior team against a driver of Ricciardo’s calibre after just one season was always a tough ask. Verstappen managed it, but he’s beyond the ordinary – and better prepared mentally, given his racing family background. There were flashes when Kvyat seemed once more the aggressive and fast charger of ’14, but in the race-upon-race grind he’s been significantly out-performed by Sainz for the last two seasons. One can only imagine the mental stress of trying to remain unaffected by the demotion. And it led inevitably to him being dropped entirely. Mental resilience is part of the make-up of a champion, of course, but circumstances had dictated pretty brutal demands on Kvyat.

So back into the fold comes Hartley who after being dropped from the family seven years earlier had dug in and carved out a sports car career that’s now won him two world endurance championships with Porsche. He’d made sure he left the Red Bull scheme on good terms and when Porsche announced it was withdrawing from WEC he made a point of getting in touch with Marko, re-iterating that if anything came up, he was still very much interested. A few weeks later he was making his F1 debut in Austin. At 27 (now 28) and annealed by the seasons in a top racing category with a factory team, he came in vastly tougher and better prepared than he would have been at 20. One senses that he will be better able to let the pressure wash over him than some of the younger, less seasoned Red Bull juniors. He’s been there, done that and now has the confidence of achievement. This is just another category.

For Gasly, six years Hartley’s junior, it’s been a more traditional path. Runner-up to Red Bull team-mate Sainz in the 2014 Formula Renault 3.5 championship, he became GP2 champion in his second season of the category after a season-long battle with team-mate Antonio Giovinazzi. He was next in line when Toro Rosso loaned out Sainz to Renault and simultaneously dropped Kvyat. He qualified impressively close to Sainz on his debut in Suzuka and drove a strong race to 12th in Brazil, pouncing on the opportunities presented by the first lap accidents in front of him.

They are two quick drivers with a lot of potential. But they’re about to be judged without mercy. Let’s see how they’re each looking at the end of ’18.