Len Terry worked quickly. A blessing given that he was by his own admission difficult to work with, apt to speak his mind and ruffle feathers: “I didn’t have the patience to explain to people whom I felt wouldn’t understand.” 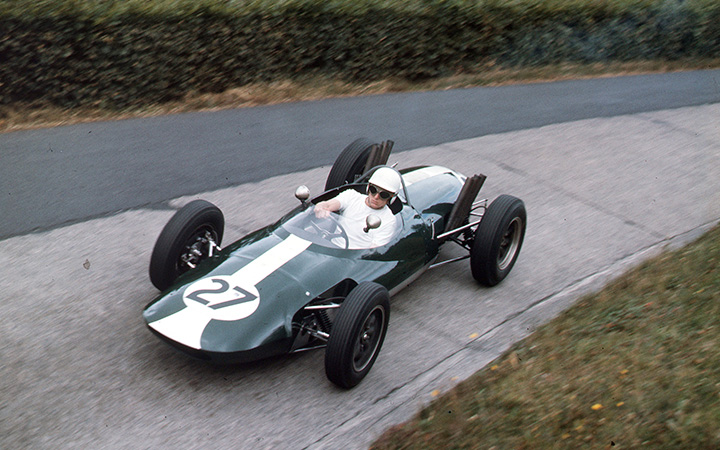 A freelancer by instinct and design, he worked with or for almost 30 organisations during his career. Among them: All American Racers (he was its head Anglo honcho for a time), Alpine, Aston Martin, BMW, BRM, Eifelland (ahem), Elva, ERA, Gilby Engineering, JWA, Leda, Shelby American, Surtees (sort of) – and, most famously, Team Lotus. 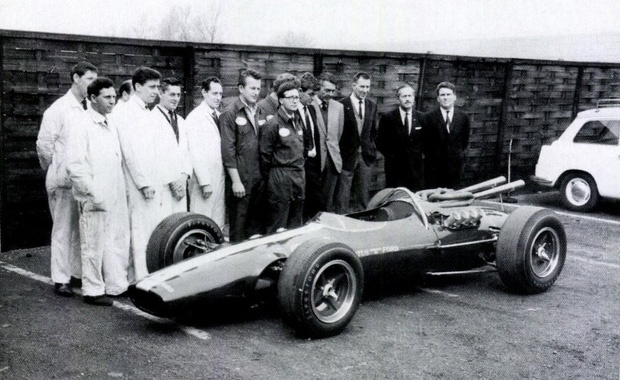 Team Lotus in 1965. Terry is third from right

He and Colin Chapman did not get on. (Colin didn’t appreciate Len’s sense of humour because – Len would only half-joke – Colin didn’t himself have one.) Yet they worked well together, Terry being one of the few to whom Chapman would sometimes defer.

Let’s see you do better! (Chapman’s challenge in riposte.)

Thus a man without a formal engineering background, a creator of promotional posters and backdrops for Theatreland luvvies, got the job.

The liaison ended after two years when the moonlighting Terry’s Terrier Mk2, in the hands of Brian Hart, upstaged serried Lotus Sevens in 1959 by winning the Chapman Trophy. A sacking offence if ever there was one. 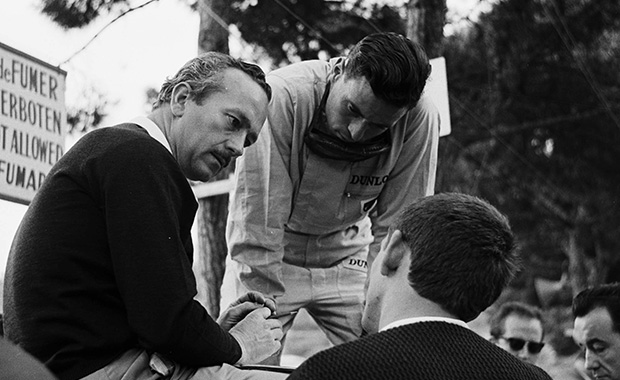 Yet after a short spell designing a sports-racer and two Grand Prix cars for ambitious Syd Greene’s Gilby Engineering, Terry – That won’t work! (His snap reaction to the Lotus-Cortina’s rear suspension) – was back. He countermanded his better judgment because Chapman was going to Indy in 1963.

“It had been an interest of mine since I was child,” said Terry. “I knew from what I had read that we could blow the race wide open: the cars there were dinosaurs. By adopting a Formula 1 approach, I felt it should be simple to win it.”

But for spilt oil from leader Parnelli Jones’ roadster and some yellow-flag naivety on rookie Jim Clark’s part, Terry’s Type 29 might indeed have won it.

Not that he would have seen it do so. Chapman had ushered his hard-working chief designer away, via waiting helicopter, as the race reached its climax. Terry was flabbergasted by the insecurity and insensitivity. 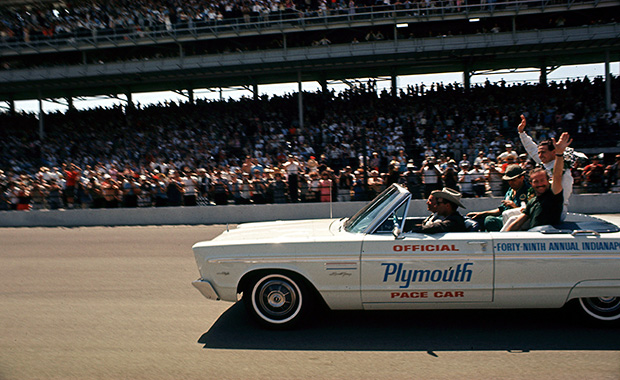 The victory lap – minus Terry

Understandably disaffected, he dragged his pen for once and the delay compromised the team’s 1964 bid, a lack of tyre-testing causing Chapman – Terry felt sure financial implications and/or inducements were also involved – to make a disastrous call on Dunlops that were soft and fast but not up to the task.

Things were different in 1965. For one, Terry was buoyed by the fact that he would soon be leaving Lotus. (He had lined up Maurice Philippe as his replacement.) Plus there was a brand new Indycar to be built, rather than a revision, and Chapman gave him carte blanche.

As importantly, Chapman then departed for a four-month tour of the Tasman Series.

He received a shock upon his return. Type 38’s design, offset suspension and all, was complete and its build soon sufficiently advanced to fit Clark into his seat prior to a shakedown of this true monocoque – rather than the usual Lotus ‘bathtub’ approach – at Snetterton in early April. 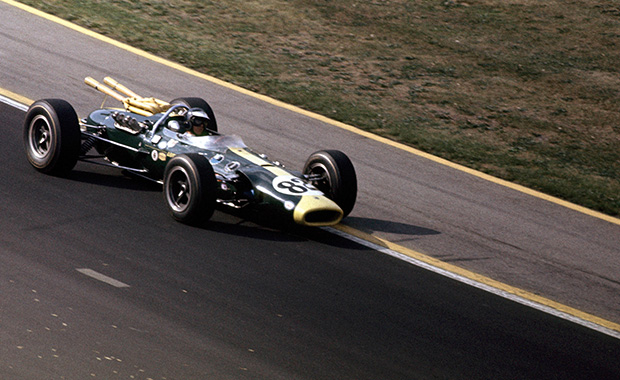 “I adopted the swirl technique,” he explained. “Ford’s top NASCAR crew the Wood Brothers did our pitstops. They were fantastic at changing wheels and made a huge difference, but I like to think that our rig made just as big a contribution. Our stops were certainly a lot faster than those of the opposition.

“We had no problems during the race. The Ford engine was strong, perhaps a little over-valved for its capacity but more than powerful enough. And Jimmy, who was so adaptable and smooth, won easily.

“I’m proud of what my car achieved, but I am not a very excitable man and, basically, it had done what I had designed it to.”

No win bonus. No celebratory telegram. No letter of thanks. He simply cleared his desk and was gone before the team’s exultant return.

His next stop was a recently bought house in Rye. Within 11 days his new boss indicated that he should relocate to California.

The surprises continued on his arrival: half a dozen chassis had been ordered. 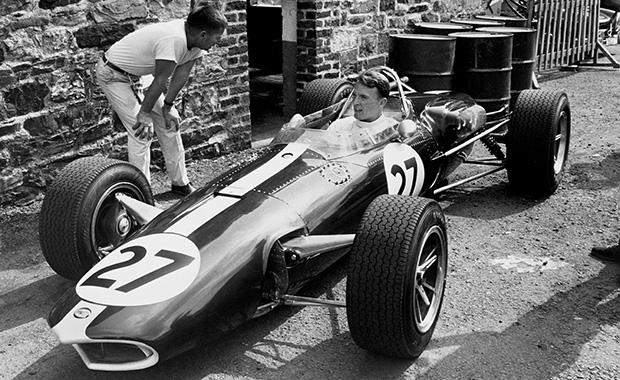 “A one-off can be made from design sketches; my preferred way,” said Terry. “Replication requires proper engineering drawings.”

What’s more, his design was to be competitive in F1 and at Indy: different engines, different demands – a tall order from Dan Gurney and his backers.

Terry: “Dan was an excellent figurehead, got things going, got on very well with the workforce. We gelled socially but work-wise he wasn’t my cup of tea. He seemed to motivate everyone except me. It had been the other way round with Chapman.

“He [Dan] made no contribution to the design. That was OK, though. His leaving it to me was a mark of respect and trust. But I never professed to be a development engineer, so I was hoping he would fill that gap.”

Polymathic Gurney was seriously good, but to expect him to be a Clark and a Chapman rolled into one was asking too much.

Unwilling to fall out with a friend, Terry didn’t stay long. He freed his lance before 1966 was out. 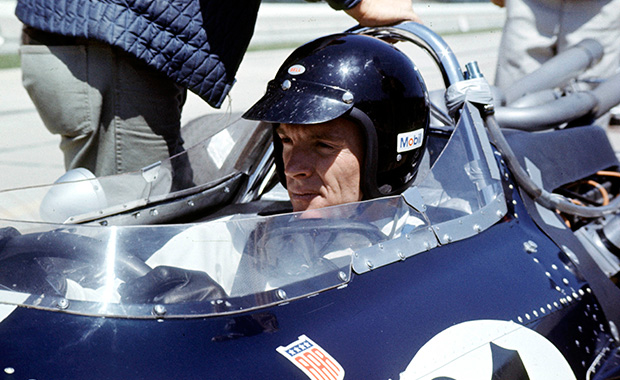 Yet one glance at Eagle T1G – from its raptor overbite to chromed (or powder-coated) tailpipes the most beautiful rear-engined racing car – disabuses any notion that this project was a disaster.

Its results were far from shabby, too.

Five Eagles landed on Indy’s grid and that of Lloyd Ruby, America’s answer to Chris Amon, was leading at three-quarter distance – having overtaken Clark’s Lotus – when oil escaping through a missing cam cover bolt began streaking its tail section.

The following season, powered by Weslake’s V12, Gurney took the design to victory in the Belgian GP at Spa. He would have won at the Nürburgring, too, but for a broken driveshaft. 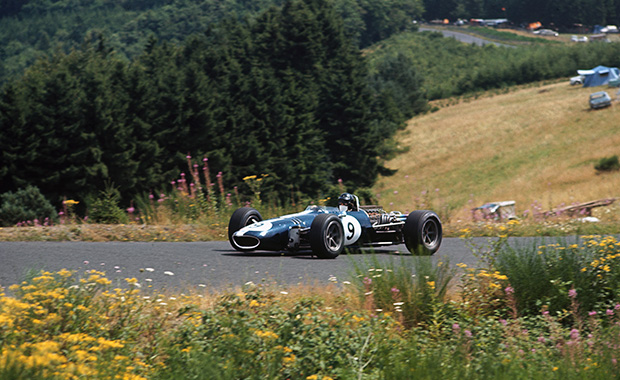 As with Chapman, Terry would work with Gurney again, on a strictly freelance basis. That way sudden changes of engine – from Offy four-pot to Ford V8 to pushrod Gurney-Weslake – could be cursed at his own convenience.

Though neither party was happy with the car, it finished third at Indy in 1970.

Terry’s speed of thought and deed regularly dug clients from logistical holes but indubitably resulted in some sketchy end products.

Creation was his thing. He had no interest in nurturing. Nor was there any motivation to. The team would take the credit should the car succeed. Terry would be blamed should it fail.

His preference for picking and choosing also left him at the whim of others’ financial peccadilloes. One-offs provide little security. That’s why, once the farcical ‘Stanley Steamer’ BRM P207 of 1977 – “There were people there who didn’t want it to succeed” – had holed his reputation below the water line, he penned Merc SSK replicas and retro-look delivery vans. 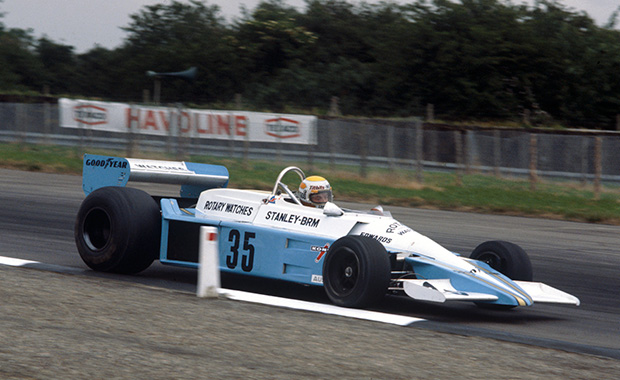 His talent did not make him wealthy but left him rich in most other ways. Catch him on the phone after one of his high-cadence bike rides – he remained a dab hand at table tennis, too – and his enthusiasm would bubble and anecdotes flow.

Chapman, Gurney, Rudd, Shelby, Surtees, Wyer – his confident line was a thread that drew the sport together.

And his bulging portfolio contained two acclaimed masterpieces that blurred the boundary between art and science. They were his genuine sparks of genius.