Season seven of what is now the ABB Formula E World Championship kicks off with a night-race double-header in Diriyah, Saudi Arabia this weekend, little more than a month after the Dakar Rally played out in the deserts of the sovereign kingdom. The much-vaunted Extreme E electric off-road series has chosen Saudi as its maiden venue in early April and then at the end of the year, on December 5, the state is due to host its first Formula 1 grand prix.

Motor racing in the Middle East has become well established over the past two decades, in Bahrain, Abu Dhabi and Dubai. But the breakthrough into Saudi Arabia is the most significant development for the sport in this region, given its might, wealth and global influence. It’s also highly contentious. Embracing nations with questionable records on human rights is hardly new territory for racing promoters, but there’s something acutely uncomfortable from a western liberal perspective about what is proving to be a rapid expansion into Saudi. Then there’s the juxtaposition of the world’s two most significant motor sport series for electric-powered vehicles running around the streets and terrain of the biggest global oil producer of them all, in Formula E’s case at night, under what is naturally perceived as energy-sapping floodlights. Where’s the sustainability in that?

To address such concerns and apparent contradictions, Motor Sport spoke to Carlo Boutagy, boss of CBX, the company that promotes Formula E in Saudi Arabia and the man responsible for making the Diriyah races a reality since the first event in 2018. Boutagy is an experienced and truly international figure in motor sport who was responsible, from 2009, for F1’s Fanzone initiative during the Bernie Ecclestone era, organising and running events in Melbourne, Mexico City, Monaco, London, Abu Dhabi and Bahrain. Significantly, he also spent a large portion of his childhood growing up in Saudi during the 1990s.

“Yesterday someone told me I’m a cocktail!” he says with a smile. “I’m originally Lebanese, born in Montréal, Canada. I grew up between Montréal, Monaco and Saudi Arabia and I’m Bahraini as well. Three of them have F1 races, of course. It works to my advantage to have this knowledge of all different aspects. But the biggest advantage is having lived here and seen how it was before.” 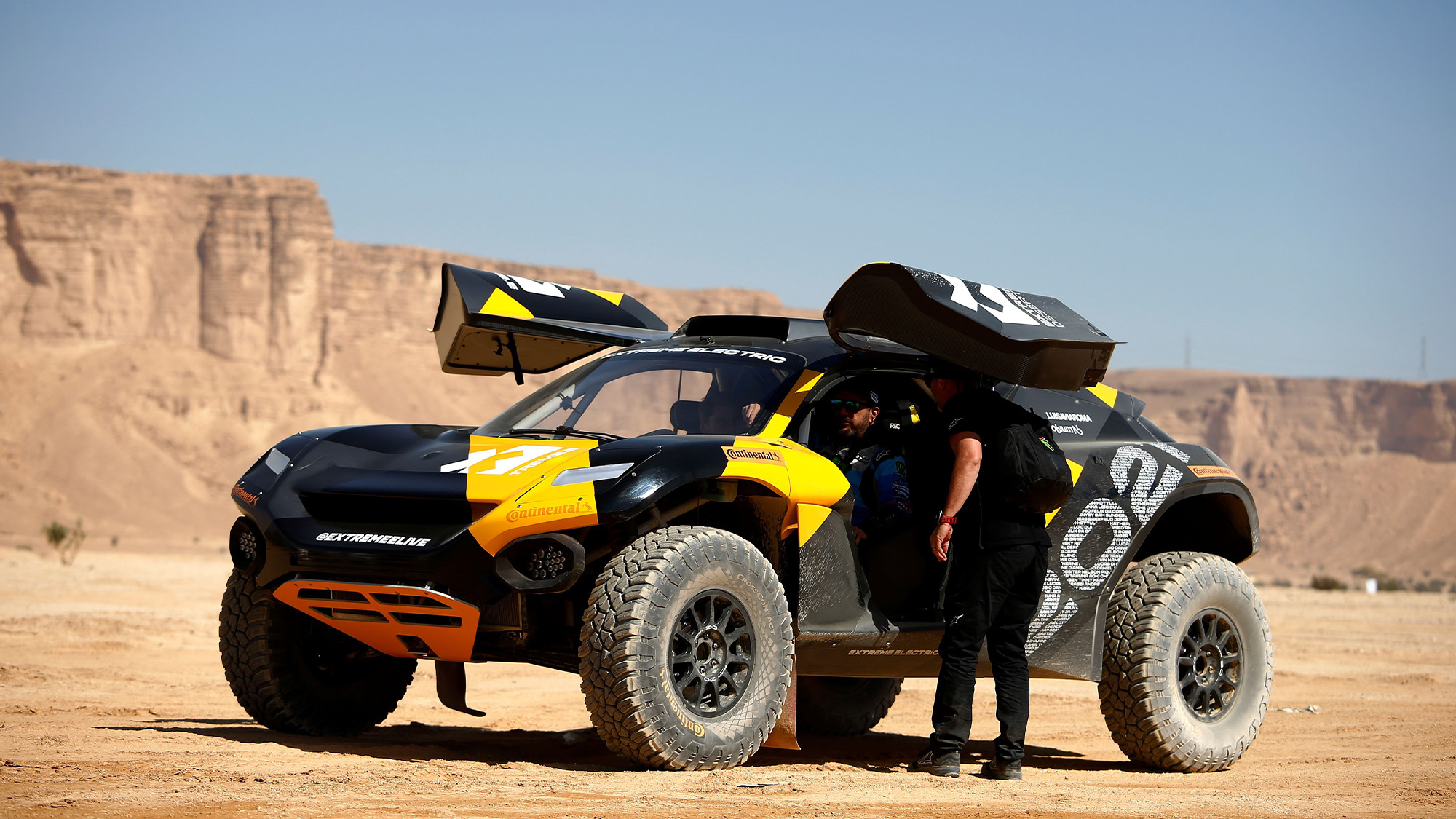 The Saudi Boutagy knew as a child was one of gender segregation driven by strict religious doctrine. He insists the kingdom is changing, and fast, as it opens up to a range of events from Anthony Joshua fighting in Diriyah to retain his world heavyweight boxing belts to the world’s most lucrative horse race, the Saudi Cup in Riyadh, boasting a $20m purse and a total prize fund for the day of $30.5m. “Keep in mind Formula E was more than just a motor sport event for Saudi in year one,” he says. “This was a stepping stone for the kingdom to show that change is happening here. It was the first international event to come into town, and with that we changed a few laws that have been going on for years.

“When I was growing up here, we always heard these promises: women will be driving, abaya [the full-length garment worn by some Muslim women] won’t be necessary, tourists would be allowed in – and it never happened. My mum would say ‘yeah, they always say that’. Then it happened in 2018 and it was a huge change for the Saudis. No abaya for females inside the Formula E event, which was a big step; international concerts, which had never happened before – and you were allowed to dance. On the ticket for local Arabic concerts it usually said you can’t dance, if someone stands up to dance they were told to sit.

How to square that circle of promoting sustainable EV-based sport in the world’s largest oil producing country?

“Women being allowed to drive happened six months before our race. It is a change. I have goose-bumps telling you the story now. Here 70 per cent of the population are under 35 and they all want things to open up, they are all educated abroad. They want to be a part of everything, they want their freedom and they are getting it. The feeling of that event was priceless. It wasn’t just a motor sport event and I’m very proud to be a part of it.”

So what is driving this change? “His Royal Highness, Mohammed bin Salman, the crown prince of the kingdom,” answers Boutagy, in a tone of reverence. [Context check: on October 2, 2018, two months before that historic first Formula E race, US-based Saudi journalist Jamal Khashoggi was murdered in the country’s consulate in Istanbul, Turkey. Turkish President Recep Tayyip Erdogan subsequently claimed the order for his death “came from came from the highest levels of the Saudi government” and this week a US intelligence report found that Prince Mohammed approved the killing. The Saudi state has rejected any link in the case to Prince Mohammed.] 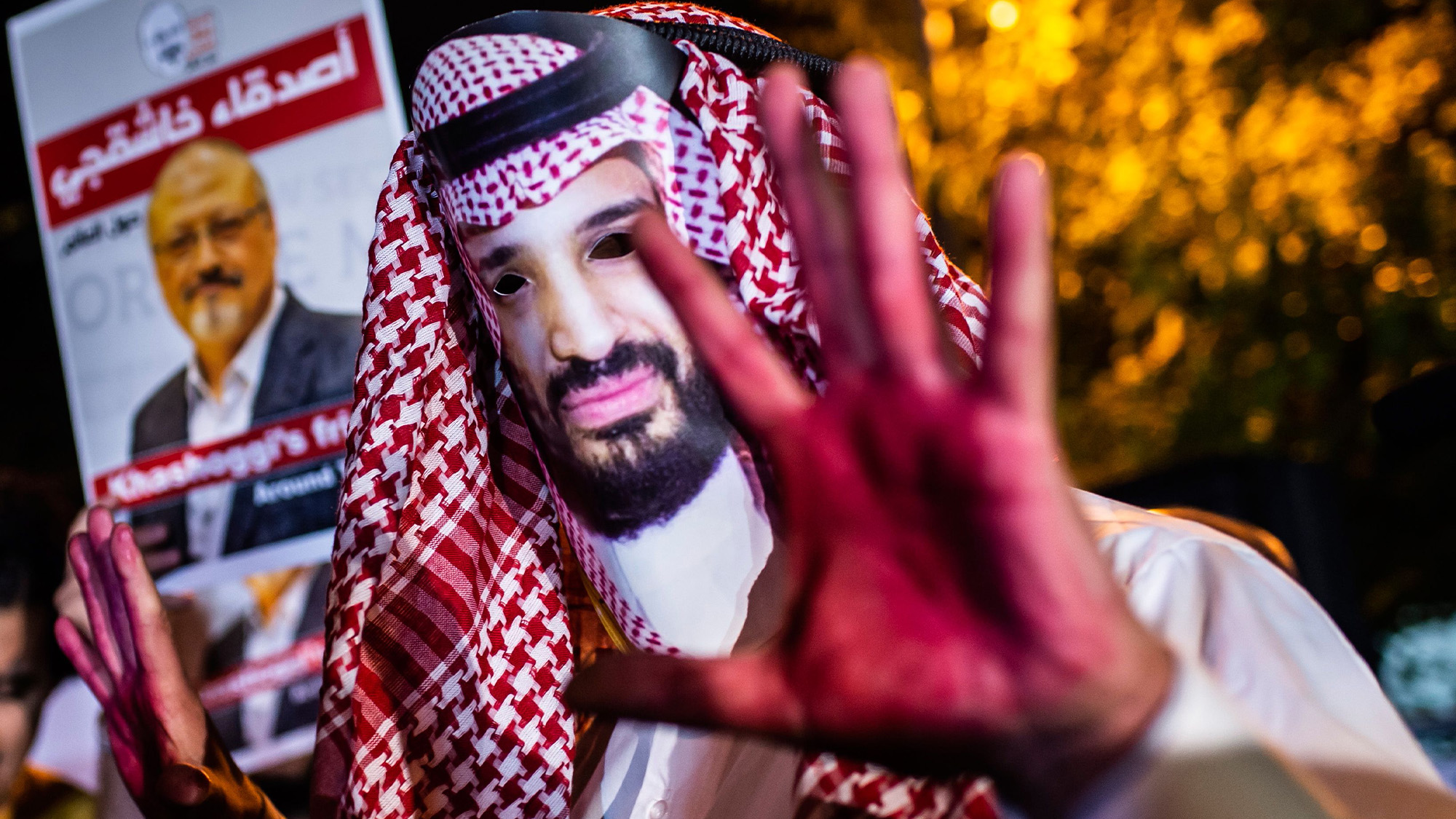 Boutagy points us towards Vision 2030, a wide-ranging “blueprint” for change developed and launched by the crown prince that pledges to “create a vibrant society in which all citizens can fulfil their dreams, hopes and ambitions to succeed in a thriving economy”.

Speaking of which, how does Boutagy square that circle of promoting sustainable EV-based sport in a country best known as the world’s largest oil producer? Again, Prince Mohammed’s Vision 2030 offers him direction. “Our country is rich in its natural resources,” says the crown prince’s mission statement. “We are not dependent solely on oil for our energy needs… We are determined to reinforce and diversify the capabilities of our economy, turning our key strengths into enabling tools for a fully diversified future. As such, we will transform Aramco” – the official oil company of Saudi, whose logos are increasingly ubiquitous at F1 grands prix – “from an oil producing company into a global industrial conglomerate.” 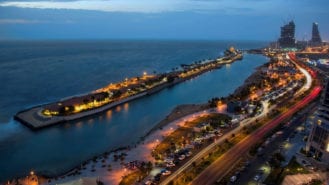 Formula 1 will add a brand new race to the 2021 calendar with the Saudi Arabian Grand Prix confirmed for the 2021 season. A street circuit in the city of…

Boutagy picks up the thread. “It is all about sustainability, which all companies need to be,” he reasons. “For Formula E it is not a case of ‘we slap your logo on the track, we take your money, here’s some hospitality tickets.’ We work with the companies to try and make their businesses more sustainable. A lot of companies want to work towards that and a lot of companies based here want to be affiliated with Formula E because of the message it gives.

“Yes, it is an oil country, the largest oil producer in the world. We all know that. But this kingdom has a vision for the next 10 years – then when you hear them talk it’s really a 50-year plan. The Crown Prince, his Royal Highness, is under 40 years old” – he’s 35 – “so he has the time to plan that far for these changes. The whole world can see we are bringing these things into town. What people aren’t noticing is all the academies and training facilities they are opening. They want to open go-karting facilities for the locals. Do we open a Formula E school or a Jim Russell school? Tennis as well, they are building more courts and opening academies. They have a budget and a huge plan around all this.” 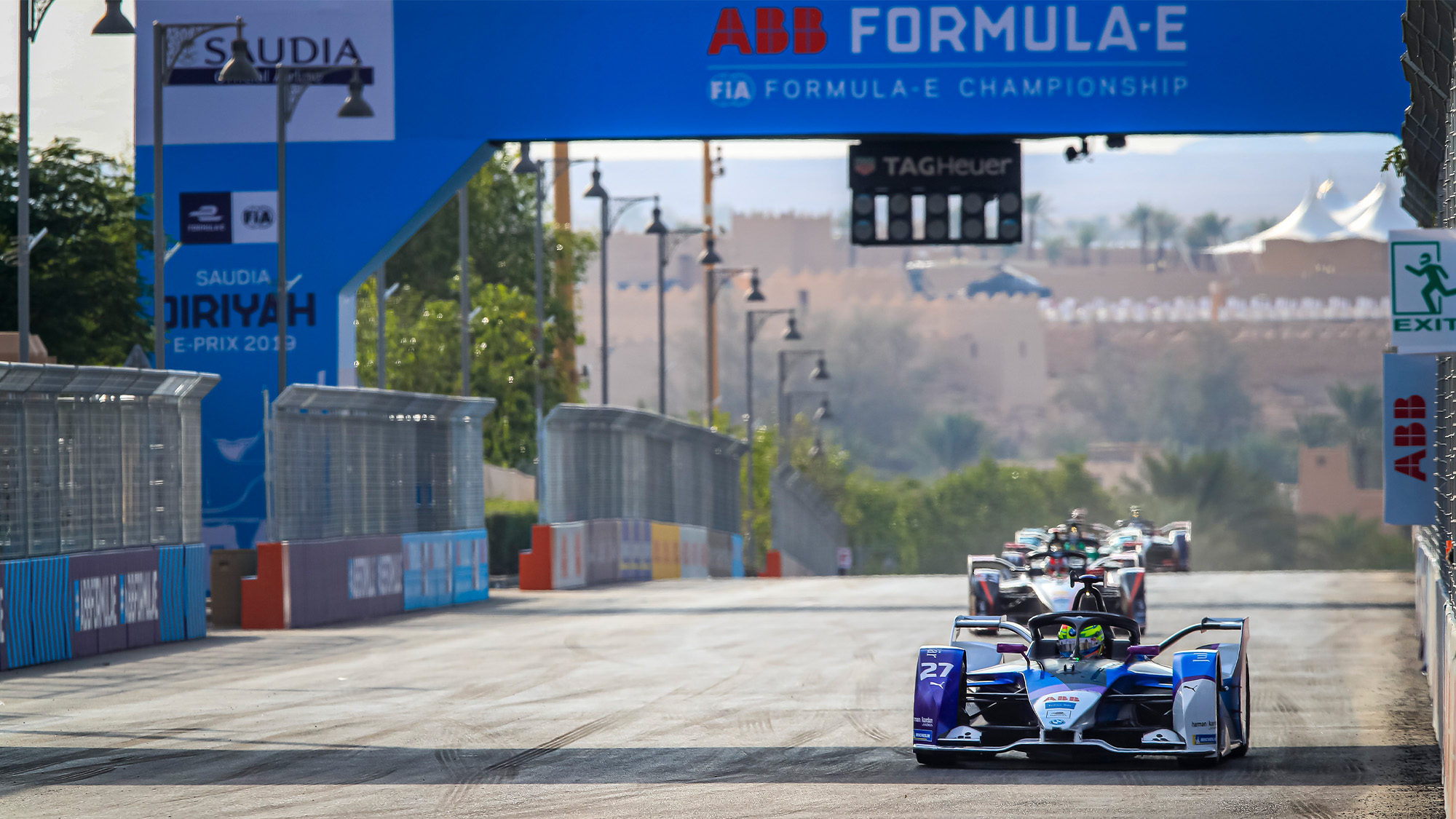 So-called ‘giga’ projects are said to point towards the Saudi of the future, based around four sites. “These new cities that they are building are going to be based around ease of mobility,” says Boutagy. “Neom will be a fully sustainable city with no cars. They are really going futuristic, looking 20 years ahead. We’ve seen the plans and it’s very impressive. It will just take some time to build it.”

But the accusations from human rights and environmental groups that hosting international sporting events is ‘sports washing’ or ‘green washing’ will not stop. “The questions can be asked all the time,” says Boutagy. “Let them come here and see. Have you been here?” I have not, I answer. “It’s easy to be sitting in another country on the other side of the world and just judging and asking. Come and see. The country is really changing. It has been a shock for a lot of people. They have been used to living for 30, 40 years in one way, then today you change the rule. It’s not being implemented slowly and at first the hotels weren’t even ready. A guy comes with his wife, the rule was if you don’t have a marriage certificate you can’t share a room. They changed the law. Change is happening. Women can drive. No more abaya now – or it doesn’t have to be black, it can be coloured.”

Progressive? It’s a relative term in this region of the world.

And the lighting for the night races this weekend? “Of course, in the beginning it took a bit of convincing for Formula E,” he admits. “It’s better here in terms of timing. The cities in this part of the world like to live nocturnally because of the heat, so it makes my job easier as a promoter to get everyone here. We have a three-year sustainability plan, to have it fully sustainable by year three. This year we are using LED lighting – it’s the first fully LED street circuit – which is reducing the carbon footprint by 30 to 40 per cent and in total we are polluting 50 per cent less than similar lighting at other tracks.” 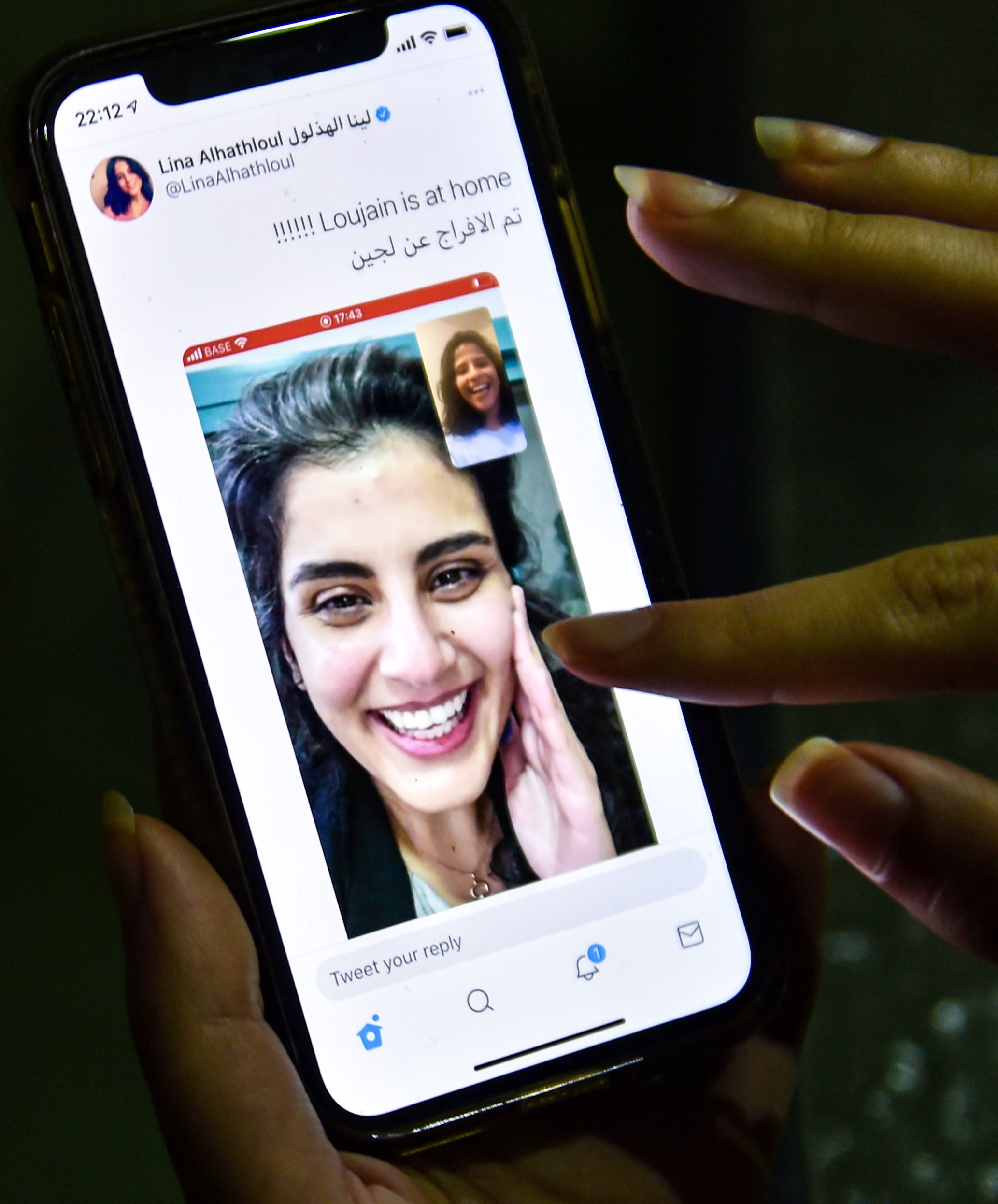 Boutagy makes his case with genuine passion, warmth and sincerity. “Before all this, all Saudis had was football matches, and for males only. That has changed. Three or four years ago they put female toilets in and females are now allowed to attend. Before restaurants were families on one side and males on the other. That’s gone. It’s nice to be a part of this change.”

And yet… the stories, the headlines, the global concern still chime all too regularly and loudly. Earlier this month prominent Saudi dissident and women’s rights activist Loujain al-Hathloul was released from prison having spent more than 1000 days in custody – although it is said the terms of her probation disallow her from talking about her time away, and she is banned from leaving Saudi Arabia.

In such a context, a motor race on the streets of Diriyah cannot help but appear to western outsiders as an inconsequential distraction. Uncomfortable doesn’t come close.