My passing mention last week of Carlos Menditéguy has set me wondering and wandering again. 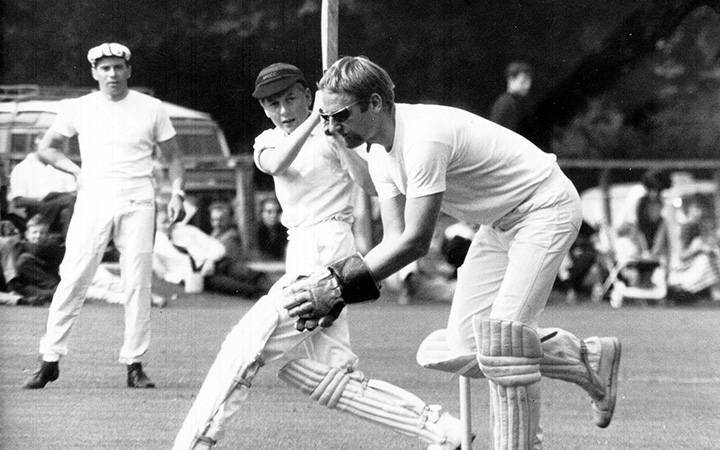 The Argentinean winner, alongside Stirling Moss, of the 1956 Buenos Aires 1000km – Maserati’s first victory in the World Sportscar Championship – was more famous at home as a polo player. Perhaps the world’s best, he boasted a handicap of 10 goals – a rare accolade.

Then it dawned on me that Moss had in turn been a gymkhana king as a kid, to such an extent that his winnings bought his first ‘racing car’: a Morgan three-wheeler. 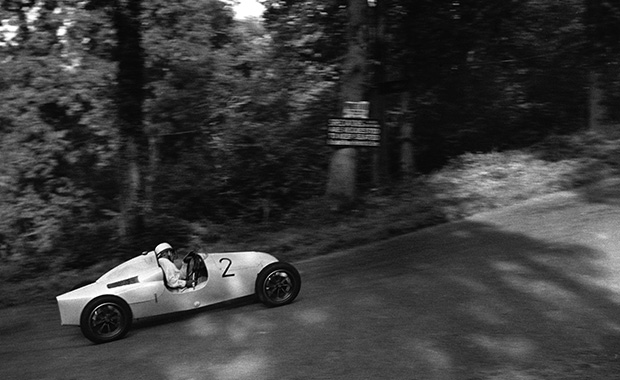 Moss at Shelsley Walsh in 1948, his first year of competition

Today’s ‘Boy Wonders’ kart assiduously from the age of seven and therefore have little experience of, and later even less contractual leeway for, other sporting activities.

Menditéguy in contrast had also shone at tennis, table tennis, squash, billiards and golf before the smell of hot grease attracted him to a mechanised pursuit.

His compatriot and fellow Maserati driver Roberto Mières excelled at rugby, rowing and yachting. In 1960 he took part in the latter’s two-man Star class at the Rome Olympics and finished 17th – two places ahead of another retired Grand Prix driver of a Maserati 250F: Thailand’s Prince Bira.

The same was true of Ben Pon. This completer of  two laps of the 1962 Dutch GP – thrown from his tumbling Porsche, he vowed never to race in a single-seater again – finished 31st (of 62) in the Skeet shooting event at Munich. 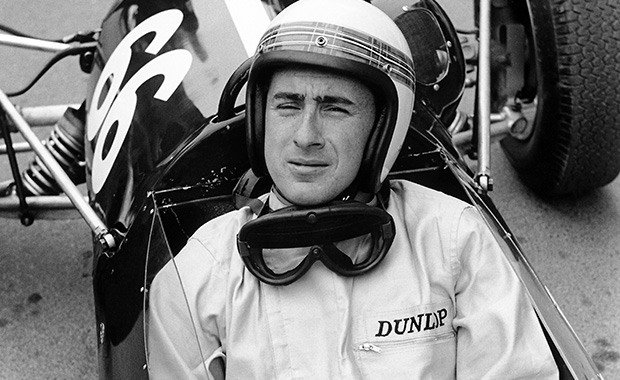 Jackie Stewart would surely have done better in the Trap shooting at Rome 1960 had this Scottish hotshot not suffered an off day at the British Trials and missed out on selection.

Qatar’s Nasser Al-Attiyah, winner of the 2011 Dakar with Volkswagen, certainly did do better, winning a Skeet bronze at London 2012.

A keen eye, honed sense of balance, fast reactions, intense concentration and fierce battling instinct are all useful attributes for the racing or rally driver.

Not the sort that allowed 1927 German GP winner Otto Merz to bang a large nail into a tabletop using only his flattened bare palm, rather of the Olympian kind. 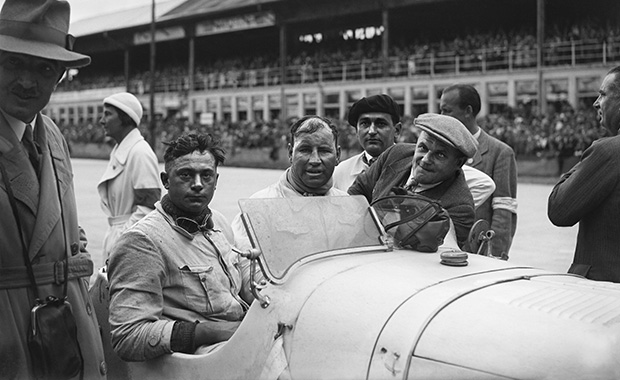 Frenchman Charles Rigoulot set several weightlifting world records before and after snatching Light Heavyweight gold at Paris 1924. He went on to become a professional wrestler. And in 1937 won the Bol d’Or sports car race at Montlhéry in a Chenard & Walcker. He contested the Le Mans 24 Hours that year, too, but retired after completing 151 laps.

Couldn’t he have carried it home?

Muscular Bruce Jenner, winner of Decathlon gold at Montreal 1976, met with solid IMSA success in Roush Racing Mustangs during the mid-1980s, whereas his Olympic successor Daley Thompson had casters (only half-jokingly) fitted to the roof of his National Saloon Car Cup Peugeot 106 of the early 1990s.

France’s François Migault of Connew F1 lore was a national-standard sprinter, and Jean-Luc Salomon, a promising Formula 3 racer killed in a multiple accident at Rouen in 1970, finished eighth in the 5000m at the 1966 European Athletics Championships. 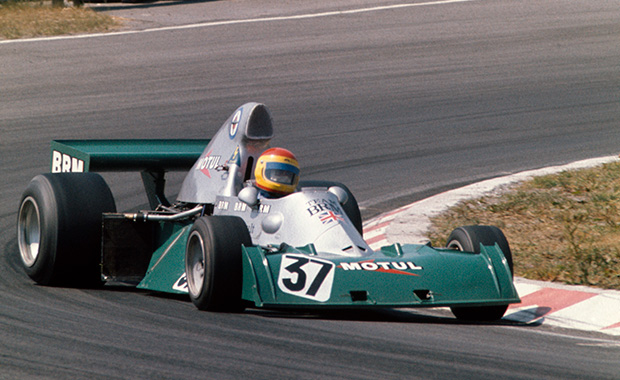 Guy Ligier played rugby union, at hooker, for the French B team from 1952-54, having already won a national rowing title in the Coxed Pairs. And Sébastien Loeb was once his country’s fifth-best gymnast.

But it’s not just the French.

European rally champion Sobieslaw Zasada finished third in the Polish Javelin Championship. And Mikko Kozarowitsky, who twice failed to qualify RAM Racing’s F1 March in 1977, represented Finland in the 1966 Davis Cup and only turned to motor racing after breaking a leg in a motorbike accident.

Tennis and squash are motifs. 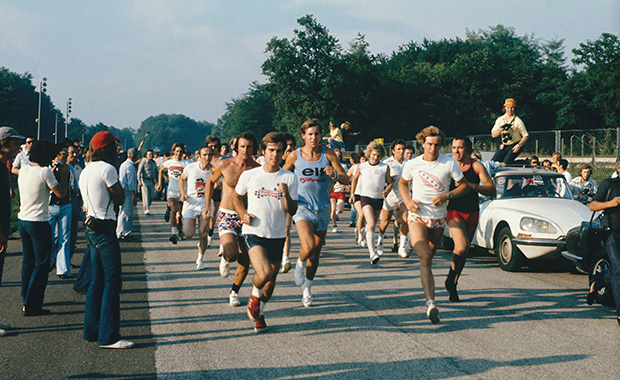 Hunt leads the pack at Monza, 1973; Frank Williams trails on the left

James Hunt was very handy at both, as was Carlos Sainz, who won the Spanish squash title. (El Matador was also awarded a trial as a goalkeeper by Real Madrid). Peter Revson won the Tennis opening event of the inaugural multi-sport Superstars TV show in 1973 – he also prevailed in the Swimming – and a run of five straight games gave Jody Scheckter maximum Tennis points on his way to becoming World Superstars Champion of 1981.

Then there are rarer sporting connects.

It’s said that Peter Brock could have made a living from a career in Australian rules football, and fellow Down Under tin-top battler Tony Longhurst was a national waterskiing champion.

American Derrike Cope, surprise winner of the 1990 Daytona 500, was on the scopes of several Major League Baseball franchises until injury curtailed his career as a catcher.

Jai-alai – think not-so-squashed squash, with a harder ball that is athletically and seamlessly caught and flung at 200mph using a curved wicker extension of the arm – is, however, the rarest. And it’s how Moisés Solana, a Mexican deemed worthy (and wealthy) enough to be handed a Team Lotus seat at six GPs during the 1960s, made his money. Betting on this fast-paced sport was hot in Miami at the time.

Of all other sports skiing, with its obvious matches of speed, optimum lines and bravery, has been the most fecund grooming ground for motor sport: from Orellier to Alphand via Killy and Klammer and many others. I’ve highlighted this in a previous blog. Bobsleigh, however, has so far slid through my net.

Henry Taylor contested its 1958 World Championship at Garmisch-Partenkirchen, where his brakeman was future 1964 Olympic gold medallist Robin Dixon. Taylor was already a British F3 champion by this stage and would go on to finish fourth in a Yeoman Credit Cooper at the 1960 French GP. 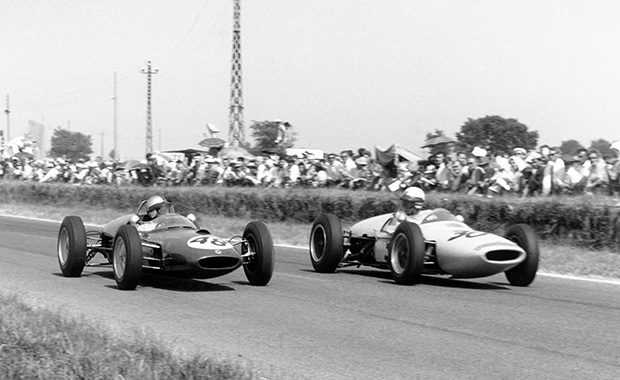 Robin Widdows, like Taylor, a demon at the Cresta Run, twice represented Great Britain in the Olympic four-man bob. At Innsbruck 1964, he was joined by MG racing ace Andrew Hedges in driver Bill McCowen’s crew and finished 13th. At Grenoble 1968, this time driven by Olympic gold medalist Tony Nash, he finished eighth.

Widdows, who won the F2 Rhine Cup at Hockenheim in 1968 and Monza Lottery race of 1969, was forced to retire his Cooper-BRM from the 1968 British GP at Brands because of ignition bothers. This was his only F1 GP, for he hung up his helmet precipitously in the middle of the 1970 season.

Bobsleigh also lays partial claim to probably motor sport’s greatest sporting all-rounder: swimmer, fencer and jockey – twice he contested the Grand National – ‘Fon’ de Portago. Having founded and funded Spain’s team, he missed out on an Olympic medal in the two-man at Cortina d’Ampezzo 1956 by three-tenths. (He was beaten by a Swiss called Max Angst.) 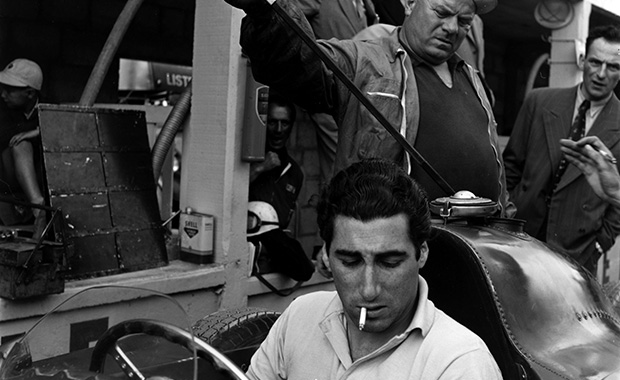 America’s Foxhall Keene, who contested the 1903 Gordon Bennett Trophy at Athy in Ireland as a member of the Mercedes team, was, like Menditéguy, reckoned to be the greatest polo player of his era – the first to be rated at 10 goals – as well as excelling at tennis and golf. He was the hub of the UK/USA Foxhunters Hurlingham team – the competition was not held along nationalistic lines – that prevailed at Paris 1900.

Then yet faster still.