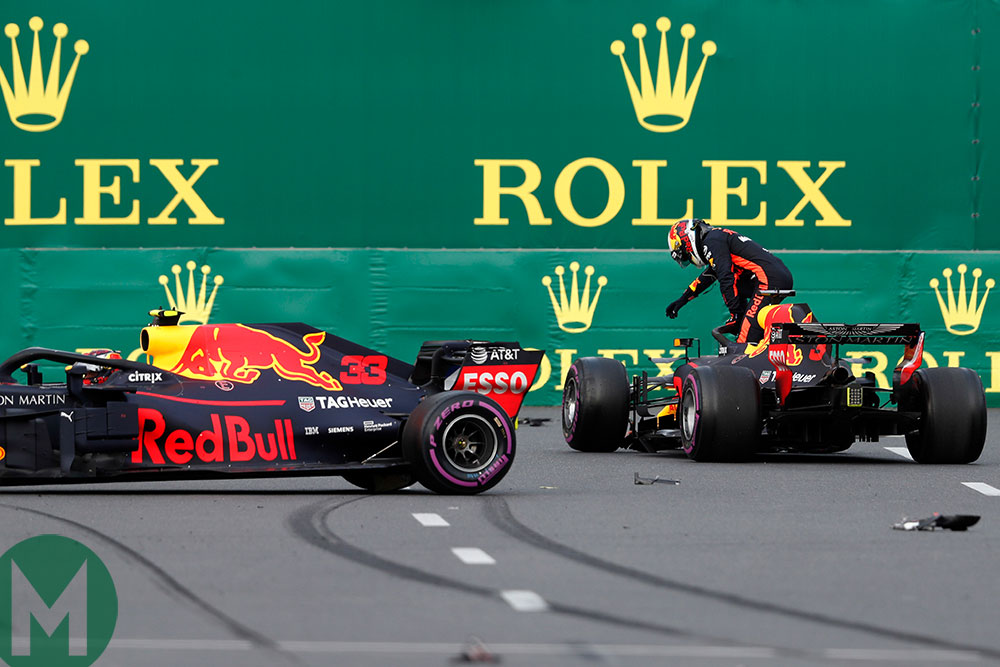 It’s interesting to ponder if there will be ramifications from the Max Verstappen/Daniel Ricciardo Baku collision. Will it change the dynamics internally? Will it have an impact upon the championship, or upon race strategies elsewhere? What does it say about the Red Bull team?

In terms of the championship, the accident was potentially catastrophic for Red Bull. There is much to suggest that it is genuinely in title contention; not favourites perhaps – their qualifying deficit is too great for that – but definitely contenders in a season where its car is super-quick and there is not (yet) a dominant rival; i.e. any races Red Bull doesn’t win are likely to be shared between Ferrari and Mercedes rather than one of them building up an unassailable advantage. A realistic tilt at the championship for Red Bull looks feasible but probably requires a following wind, probably relies upon them maximising every scrap of points-scoring opportunity while hoping Ferrari and Mercedes trip up every now and again and take points off each other.

Up until Baku, that’s the way it was shaping up. Red Bull had made that super-slick double pitstop in Shanghai work to ambush a victory out of nowhere. Mercedes (Australia) and Ferrari (China) had each lost the lead to tactical errors around the safety car. Red Bull, meanwhile, had maximised its opportunities. Furthermore, generally being at the back of that three-team group on the grid (because of its Q3 power shortfall) meant it could play the safety car waiting game with no undercut risk. That’s largely how it won in China and might’ve given it the same chance again in Baku. Except the safety car was this time caused by them.

“That’s what makes it especially annoying,” said Christian Horner after the race. “There were 22 points there on the table – and they’ve gone.”

“When we had this situation with Lewis and Nico,” said a Mercedes team member, “we had a dominant car, so we felt we could afford to let them race. But when you’re actually in a real fight for the championship against other teams, it becomes much more difficult to let your own guys race each other.”

Horner adds: “We will discuss it prior to Barcelona, but we want to continue to allow the drivers to race. But they’re driving the car at the end of the day and they have to ensure that if they are going wheel to wheel they allow each other enough space… when they put the overalls on and get in the car they are representing around 800 people, not just racing for themselves.”

That’s the perspective of a team owner – and there will always be a fault line between that and the perspective of a front-line, intensely competitive driver trying to win the sport’s biggest prize. When you’re there in the car, in the heat of battle, wheel-to-wheel with the other guy in the team that could stand in your way, then you very much are racing for yourself. That’s just how any top driver is wired up when you get to the essence of it. If he wasn’t that way he’d be a reluctant but ultimately compliant number two. Neither Ricciardo nor Verstappen are number twos and both are potential world champions, maybe even 2018 world champions.

So let’s see; a car that’s nibbling around the edges of being a title-contender, a little down on power, requiring momentum to be maintained at all times – and two of the fiercest drivers on the grid looking for their first championship, one of them tied into the team long term, the other potentially free to go elsewhere from 2019. One of them probably the sport’s most audacious overtaker, the other one maybe the sport’s most audacious overtaker… Both of them totally resolute in defence. And a team that’s allowing them to race. Difficult to imagine how that situation could possibly be made more combustible.

Logically, from outside the red mist and personal ambition of the cockpit, if they are racing wheel-to-wheel, there have to be agreed terms of combat. Those terms have to include not making a double defensive move – which when squeezed to the absolute limit, is what Verstappen did and ultimately that is why they crashed. Sometimes it’s argued that Ricciardo’s passing moves rely too much on the other guy being forced to give way to avoid contact – but that’s not usually the case, actually. The other guy usually has the choice of surrendering early, getting onto the ideal approach and watching Ricciardo run wider on the exit, then slipping back beneath him. But usually they don’t. Usually they stay with the defence too long – and only then are they forced to either surrender or crash. The master of the ‘initial surrender then immediately retaliate’ cut is Fernando Alonso (see Austin and his long-running dice there with Carlos Sainz, another man who regularly uses it). We saw it from Lewis Hamilton in his dice with Nico Rosberg in Bahrain 2014. All of which is to say, Ricciardo’s trademark dive-bomb attack is legitimate. Moving twice in defence and leaving the other guy nowhere to go is not. Up until the point Verstappen did that, this had been a totally clean no-holds-barred dice. Rubbing tyres as they fought out the exit of Turn 1? Fine. The same again up to Turn 2? Just part of the game if you want to take it that far. The accident was almost totally Verstappen’s fault.

Which contradicts the official team position (Horner’s and both drivers’) post-race. But that almost has to be the team’s position if it’s to move forwards, so as not to further antagonise the situation. Of more importance is what the team’s position really was behind closed doors – when Horner, Helmut Marko, the two drivers and the race engineers were locked in the debrief room together after the incident. Because it really needs to have been spelt out to Verstappen that the double defensive move was a foul – whether he accepts that or not, that it would henceforth be considered a foul by the team if used against the other Red Bull. Ricciardo’s public shouldering of some of the blame when in reality there was little or none suggests a maturity and long-game awareness that his younger team-mate perhaps lacks. But it may also be indicative of having been vindicated in the team meeting.

Inevitably, parallels were drawn between this incident and Istanbul 2010 when the Red Bulls of Sebastian Vettel and Mark Webber took each other out. Many of the same factors were at play and so it’s not so surprising that the outcome was so similar. But there is perhaps one crucial difference: Vettel and Webber had a personally acrimonious relationship (although don’t now) whereas Ricciardo and Verstappen are merely competitive with each other. There’s little or no poison evident. In that sense, it might be easier to control this time around. But that all depends upon how much Verstappen’s position was indulged in that post-race talk. And if he wasn’t indulged, if the law was laid down and his culpability spelt out, with his long-term deal in place might his attitude be, ‘I don’t care. I’ll just say all the right things but be ready to do exactly the same again in the same situation’.

That’s what makes that fault line between team and driver perspectives so fascinating and why it so often fuels the excitement of the sport. Don’t knock it, just enjoy it.