Sergio Perez’s re-signing with Red Bull makes perfect sense for the senior team itself but exposes the fault line between the team’s aims and those of the group’s young driver programme.

Whatever your opinion on the justices or injustices of individuals who have been through it, Red Bull’s has been arguably the greatest of any young driver scheme. It has produced Sebastian Vettel, Daniel Ricciardo and – at a push – Max Verstappen (though the latter was creating a sensation in the junior ranks without Red Bull and was only co-opted into the programme as part of his F1 recruitment by the group). But it has rejected many along the way and in F1 we see just the tip of the iceberg of that. It can be brutal. But even many of those who don’t manage to stay in the programme come to earn a living within the sport as a result of the opportunities it gave them to show their worth.

The romantic ideal of course is that it supports a complete unknown and builds them into a world champion. That happened with Vettel. It came close with Ricciardo. Verstappen was never going to be an unknown, but to its credit it was Red Bull – and not Mercedes, Ferrari or Renault– which acted on the immense potential it could see in him at 16.

But by definition there are not going to be many with the potential of Vettel, Ricciardo or Verstappen. They just don’t come along that often and, making things even more difficult, it’s usually impossible to call the full potential of a driver until he’s in F1. Drivers develop at different rates, with different skill sets, mental and emotional development and circumstances.

Red Bull the team, as opposed to the group, needs two fully-formed top drivers as it fights for world titles. Even if Verstappen is recognised as the team’s golden boy, the other driver needs to be good enough to take points off any title rivals, good enough to win when Verstappen hits trouble. Perez has proven – particularly into this season – to be that driver. If that sometimes means a little bit of friction when he’s too good, as in Monaco last week, then that’s a nice problem to have. It’s the first time the team has faced that problem since Ricciardo left. 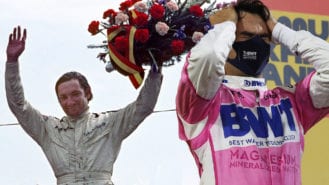 They are both drivers of great ability but neither was able to perform to the required level at the senior team when given the opportunity. With a few exceptions, they played no part in the outcome of Verstappen’s races, were usually not close enough to be able to compromise the strategy of Verstappen’s competition. Initially, neither was Perez. But as an experienced old hand he was able to withstand the pressure which resulted and just worked away at improving.

But the biggest improvement in his performances came with the advent of the 2022 car. No longer was the Red Bull an aggressively pointy challenge of a car with so sharp a rotation that only Verstappen could live with the feeling of rear instability that brought. That was what had made it so difficult for Perez – and Albon and Gasly before him – to even get close to Verstappen. Last year Perez qualified an average of 0.377sec off Max. This year so far the difference is less than a tenth.

The fastest drivers always excel in cars which sit on that razor edge of responsiveness and instability. That doesn’t mean that’s the fastest way for a car to be. But it does mean that the gap between a good driver and a great one will be exaggerated in such a car. It’s perhaps fortunate for Perez that he was in situ when Red Bull came up with a more benign car. Had Gasly or Albon been compared to Verstappen in such a car it’s likely they would have fared rather better.