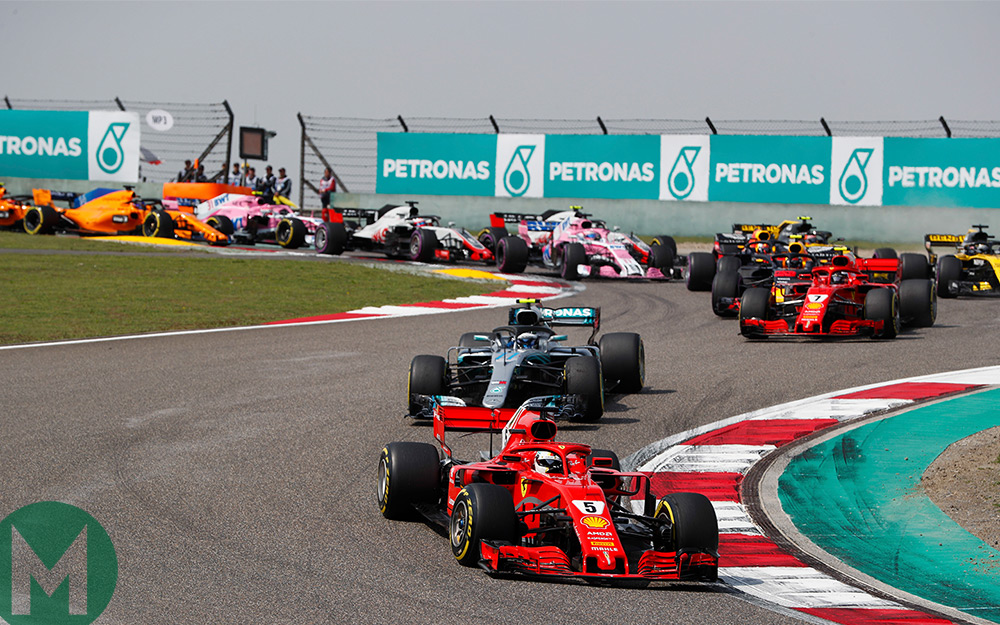 Daniel Ricciardo won the Chinese Formula 1 Grand Prix after a decision by Red Bull to pit him under a safety car and a series of sensational overtakes. Championship protagonists Lewis Hamilton and Sebastian Vettel took fourth and eighth, respectively.

Valtteri Bottas and Kimi Räikkönen completed the podium, with former’s chances of victory scuppered by a safety car period after the two Toro Rossos collided.

Vettel led after a clean start, blocking off Räikkönen while Bottas and Max Verstappen jumped to second and third, respectively.

A distant Red Bull pair attempted to undercut Mercedes on lap 18, causing Mercedes to bring its duo in for mediums and Ferrari to react, pitting Vettel a couple of laps later.

Räikkönen was kept out with the aim to slow race leader Bottas, who had seemingly benefited from the early pitstop.

But a safety car, caused by Pierre Gasly’s clumsy move on his team-mate into the final hairpin just after the halfway point, gave Red Bull the cue to double-stack its drivers for soft tyres.

Bottas led the restart from Vettel, speeding out of DRS range, but the Red Bulls had the advantage on new soft tyres.

Ricciardo eased past Räikkonen soon after while Verstappen lined up Hamilton. However, Verstappen ran wide through the esses in an attempt to take third place off Hamilton, rejoining behind Ricciardo. The Australian overtook Hamilton shortly, then taking second off Vettel.

Vettel’s race took a turn for the worse as Verstappen made contact with him into Turn 14 and the two spun, causing Hamilton to take evasive action for fourth place, Verstappen to take a 10sec penalty and a damaged Vettel to slow to seventh. The polesitter, who seemed to be cruising to victory, was then dropped to eighth as Fernando Alonso pushed past him in the closing stages of the race.

Ricciardo took the lead off Bottas on Turn 4 after a fair but close scrap, and sped away to victory with 12 laps remaining.

Kevin Magnussen, who was swapped with an irate Romain Grosjean early on, ended up 10th, taking the last of the points at the expense of the Force India pair behind.

Lance Stroll, who ran as high as 12th, ended up 15th behind Stoffel Vandoorne but ahead of team-mate Sergey Sirotkin.

Marcus Ericsson took 16th, ahead of a struggling Romain Grosjean. Gasly finished 18th with a 10sec penalty while Charles Leclerc finished 19th owing to a late spin. Brendon Hartley was the sole retiree.

For full analysis of the Chinese Grand Prix, stay tuned and sign up for the Mark Hughes newsletter to receive the in-depth Grand Prix report to your inbox soon.