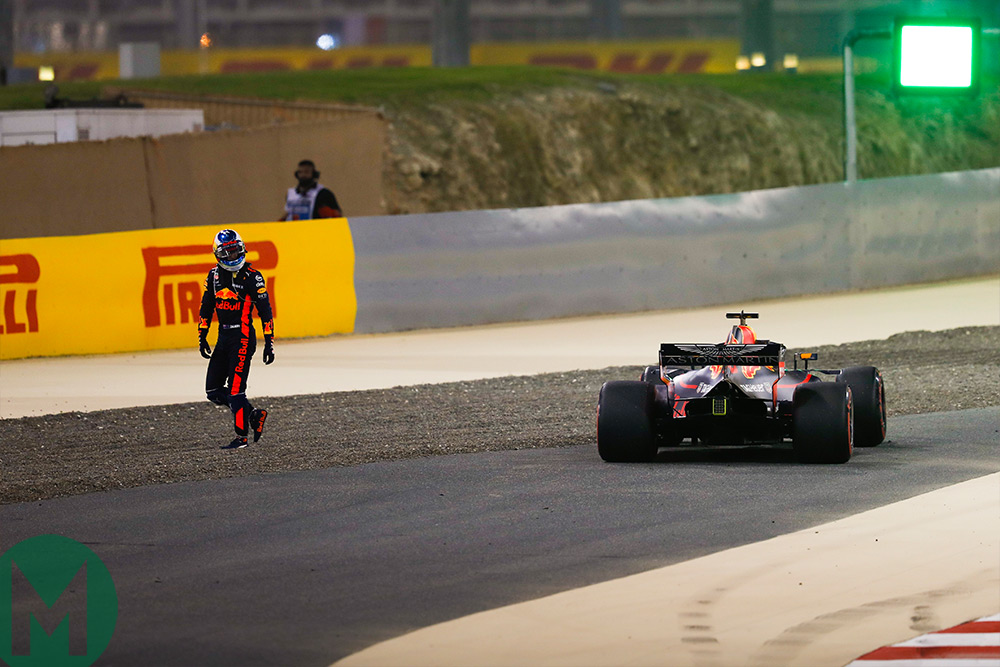 Daniel Ricciardo has never faced something like this. The most famous smile in Formula 1 has faded recently to a grimace, as the popular Australian approaches the biggest crossroads of his career.

Ever since he secured his seat at Red Bull’s top table for 2014, he has looked every inch like a world champion in waiting. Pound for pound he’s one of the sport’s best, and most consistent, drivers. He may occasionally lack the visceral raw speed of the team’s new talisman, Max Verstappen, but Ricciardo more than makes up for that with his level-headed approach to races.

Had his promotion not coincided with the technical regulation change that shifted momentum firmly toward the silver cars of Mercedes, Ricciardo could well have taken a world title or two of his own by now. I’d back him over Verstappen to win a title first, given equal machinery.

The issue at the moment is, from the outside at least – and perhaps also inside Ricciardo’s mind – the machinery isn’t performing equally.

The rise of Verstappen has undoubtedly been a contributing factor in Ricciardo’s bombshell decision to jump ship to Renault for 2019 and beyond. Usually a manufacturer contract is the holy grail for a racing driver. But when you’re leaving behind a proven race-winning car in favour of one that only just manages to make Q3 consistently, the perceptions of such a move change.

“Everything feels hopeless… the car is cursed.”

But right now, Ricciardo would likely be happy to swap his RB14 for anything. Two straight retirements in USA and Mexico have contributed toward a darker, moodier Ricciardo. And you can’t blame him. Surely, he’d have wanted to finish his Red Bull tenure with a flourish, rather than a whimper. But this year has completely gone to pot for him.

His early season title hopes – following impressive wins in China and Monaco – feel like a distant memory that has given way to eight retirements from 19 races, by far the most for any driver on the grid. Two more, even, than the unfortunate Fernando Alonso, who holds the second-worst record this term.

Verstappen, in contrast, has suffered just three retirements. The result is that Ricciardo can only finish sixth at best in the drivers’ championship. Last of the drivers in the top three teams, and his worst world championship result since 2015, despite winning two races this season.

The races in both Austin and Mexico City were a perfect microcosm of the situation. Ricciardo ran with a chance at a podium finish, but lasted just nine laps before his Renault engine died thanks to an electrical failure. He was left to sit and watch Verstappen’s super-impressive run from 18th on the grid to second. The retirement, according to Red Bull boss Christian Horner, prompted Ricciardo to “put his fist through the wall” of his private room.

Ricciardo’s media activity was limited after Mexico, a race he started from a jubilant pole and finished at the side of the track with hydraulic failure, again leaving Verstappen to pick up the pieces. But his few words were telling.

“I don’t even think frustration is the word anymore,” he told reporters. “Helpless is probably a better word. Another problem with this car. Things are happening on a Sunday which I have no explanation for. I don’t know, the car is just… I’ll let Gasly [Pierre, Ricciardo’s 2019 replacement] drive it, I’m done with it.

We’ve never heard words like this from Ricciardo before.

“I hope that this dark cloud that’s following him around lifts for the final two races.”

The smiling assassin, epitomised by a honey badger on his crash helmet, has suddenly turned defeatist. Let’s not forget the main failures this year have concerned the Renault element of the RB14, although admittedly Red Bull’s different usage of those components in order to push its performance envelope to the maximum could equally be to blame. But while both factory Renault cars have also had chequered years, with seven retirements between them, only two have been mechanical; six of Ricciardo’s retirements have been mechanical…

Has regret also contributed to Ricciardo’s current slump? That question was put to Horner.

“Only Daniel can answer that,” he said. “There’s no point broaching it with him. The decision was made and he’s comfortable with it. He’s driving a competitive car that’s taken pole position so you can see the differential between where this part [the front] of the grid is and where this part [Renault] is two laps behind.”

But for Horner’s part, there have also been a few subtle swipes. After Austin he suggested Ricciardo “will be having a word with his future employer” as Red Bull squarely continued to blame Renault for its technical troubles. But why do they seemingly always strike Ricciardo’s side of the garage? Suggestions of team bias in the wake of Ricciardo’s decision to move have been vehemently batted away, and Horner makes the valid case that sabotaging Ricciardo does more harm than good.

“I’m sure you can understand his [Ricciardo’s] emotions are running incredibly high,” Horner said after Mexico. “It’s gutting for him and for us, as we lost a potential 1-2 finish, which has enormous value for us. But you can understand his frustrations and I hope that this dark cloud that’s following him around lifts for the final two races.”

Ricciardo will do those final two races, regardless of whether he sees the point of them or not. And they will be pivotal outings as they will define quite how the Ricciardo-Red Bull relationship will ultimately be remembered before he makes the switch to Renault – a move with serious questions that only the next few seasons can answer.

Let’s just hope Red Bull and Ricciardo can deliver the sort of success their partnership always promised, before it’s too late.