Rick Mears was an off-road racer and dirt tracker who was hired by Roger Penske to drive Indy cars in 1978. Mears won three races in his first year with Penske before winning the Indy 500 and CART championship in 1979. Rick went on to win three more Indy 500s and two more championships before retiring in 1992 as one of the most respected Indycar drivers of all time. 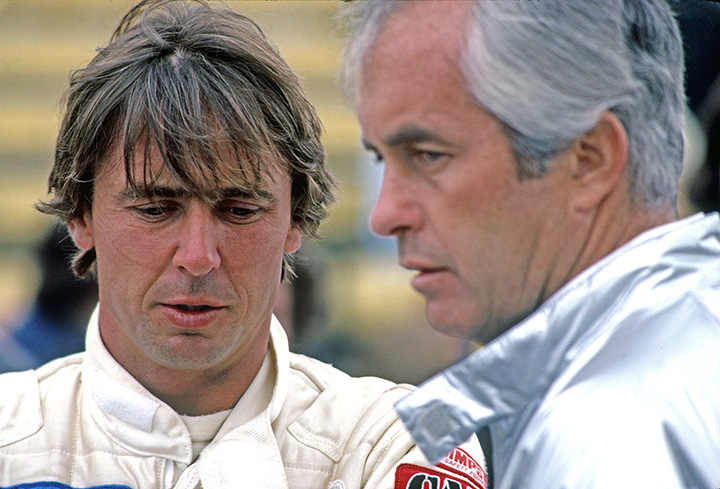 In 1980 Mears tested a Brabham F1 car at Bernie Ecclestone’s behest and Bernie offered him a job, but Rick decided to stay with Penske and continue his career in America rather than tackle F1. Rick tells the story of his Brabham tests in my 2008 book Rick Mears – Thanks. The following is taken from the book:

Rick’s remarkable rise to prominence attracted the attention of Formula 1 boss and Brabham team owner Bernie Ecclestone. In those days the diminutive Englishman was just beginning to assert his authority in F1. He had bought the Brabham team in 1972 and would run it through 1987 when he sold the team to focus entirely on running  F1.

But Rick’s successes at Indy and in CART caught Ecclestone’s eye and in 1980 he offered Rick a test drive in one of his Brabham BT49 F1 cars.

“That was when CART and USAC split and it was like, ‘What’s going to happen here?’,” Rick tells the story. “I received a call from Bernie about running Formula 1. My thinking at that time was I might pursue this a little, just to keep my foot in the door in case CART doesn’t make it. That was one of the main reasons I pursued it.

“The other reason was everybody seemed to think Formula 1 cars and drivers were a head taller than everybody else. I had my own curiosity to satisfy. I went to Roger and told him that Bernie wanted me to come and test and was offering this kind of money. I wanted to tell him first and see what he had to say about it. 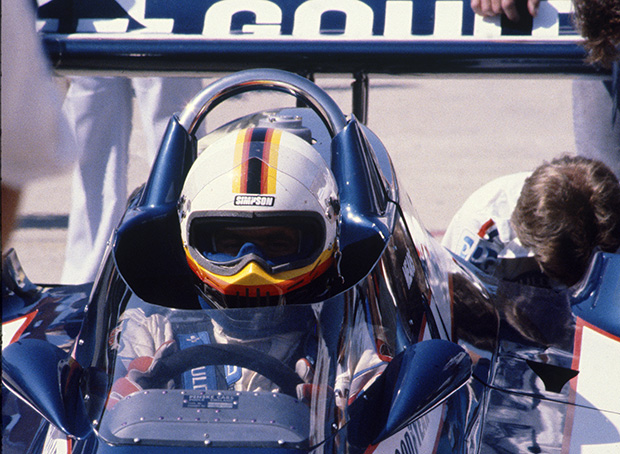 “He said it was a business decision I had to make. He didn’t try to hold me or threaten me. It was typical Roger. He supported me. He told me, ‘You’ve got to do what you’ve got to do.’ So I said I was going to go ahead and run the test and see what I thought, and Roger said OK.”

Rick tested the Brabham twice, first at Paul Ricard in France and then at Riverside. “That was fun! The characteristics of the F1 car were completely different, because those cars are lighter, quicker-reacting, and more responsive,” Rick observes. “You have to hustle an F1 car harder. The first time I drove the Brabham I was a couple of seconds off the pace, and that was because I was driving it like an Indy car – smooth and steady, not making any bobbles, not touching the curbs. I was using all the track but not over-using it, and I was a couple of seconds off.

“I thought, ‘What’s wrong here?’ So I got mad and started driving the shit out of that thing. I started sliding it and pitching it sideways and bouncing it off and over the curbs. Then I got down to competitive times. I discovered you’ve got to change your way of thinking when you drive an F1 car. It’s a stand-on-the-gas, bang-it-off-the-curbs-every-lap type of thing. In that type of racing, you can’t pace yourself. It’s a flat-out deal all the time.” 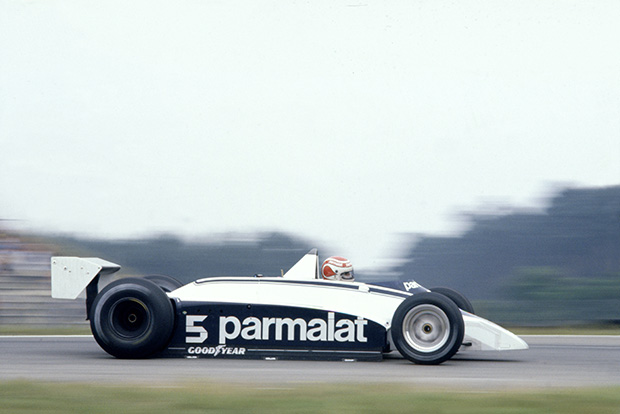 By the end of his test in France, Rick was half a second away from matching Brabham team leader Nelson Piquet’s fastest laps. Piquet (above) finished second to Alan Jones in the 1980 F1 world championship and would go on to win the F1 title in 1981. “I got within about half a second of Nelson’s time and I found out a race car is a race car. The basics were the same. I was making sure not to make any mistakes. I knew there was more left in the car and more left in me. I knew we could run closer to him, if not as quick.”

At Rick’s second test in the Brabham at Riverside a few months later, he was quicker than Piquet. “We came back to Riverside where we did a Weismann gearbox test. We had a couple of chicanes in the track to test the gearbox, and I ended up being quicker than Nelson. So then it boiled down to, do I want to do this? I knew I could be competitive if I wanted to do it.”

Today, Charlie Whiting is the FIA’s Formula 1 race director and starter, and Herbie Blash is the FIA’s chief observer, overseeing the operation of F1’s pitlane, parc fermé and victory lane. But back in those days, Whiting and Blash were mechanics on the Brabham team and both were impressed with Rick’s performance in his pair of tests in one of their cars.

“For me, Rick was the real Mr. America,” Blash (below with Murray and Head) recalls. “He was super-cool, good-looking, and having a look at that Indy ring on his finger meant so much to me. I go back to when Jimmy Clark won the Indy 500, so Indy was always such a big thing. But he was so cool. I thought Rick was the coolest dude. You could see that he was going to be right there. He was so smooth from the start. For me personally, he would have been extraordinarily successful in Formula 1. There’s no doubt about it.

“You could see the Roger Penske influence as well. That had rubbed off on Rick quite a bit. But he was very smooth, very intelligent, very understanding of the car. He would have been a megastar in Formula 1 because he had all that and he was extremely polite and genuine.” 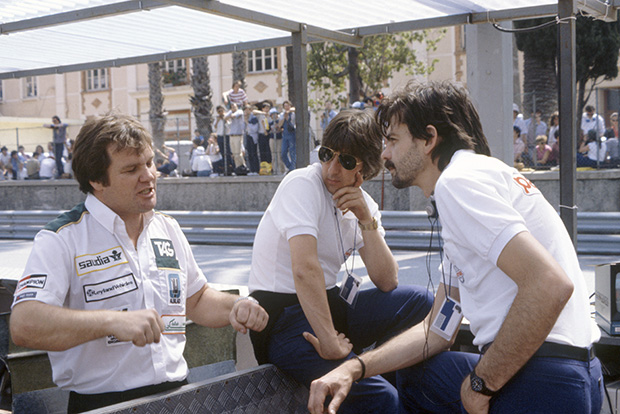 Whiting was equally impressed. “He came across as a sun-tanned Californian, ultra-cool,” Whiting says. “I remember how easy it was to deal with him. There was no fuss. He wasn’t one of these drivers who took a lot of taking care of. In the very limited time he had in the car you could see he was a very easy guy to work with. It was a pleasure running him.

“From a mechanic’s point of view, Nelson (Piquet) was a dream. There was no messing around. He just got in and drove, and Rick appeared to be of the same ilk. I thought they would have made very good team-mates had it all come out like that.”

Adds Blash: “Nelson liked Rick. He liked him and believed he was giving us good information and would have had no problem working with him.”

Ecclestone saw enough to offer Rick a ride. “Bernie and I came to terms on a contract,” Rick says. “It was a matter of me making the decision of whether I wanted to go or not.”

But to the F1 impresario’s disappointment, Rick decided to continue in CART and Indy car racing with Penske’s outstanding team. “I got into racing as a hobby because I love it and it’s what makes me happy,” Rick reasoned. “I decided I was going to do what makes me happy, not what pays the most. I just started weighing all the facts. The money in F1 was good, yes, but it was road courses only, and I liked ovals. I could see CART getting strong and I liked the variety of CART with short ovals, long ovals, street circuits and permanent road circuits. I felt you had to be a more well-rounded driver to win the CART championship and I liked the Penske team and the association we had there. To me, CART was more competitive and more challenging. 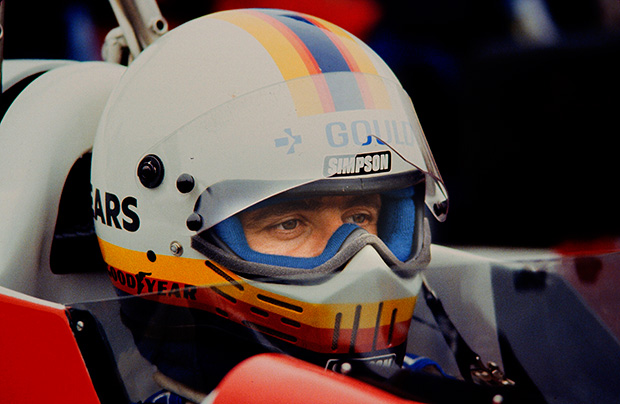 “I kept weighing everything, and I said, ‘I don’t care for some of the egos over there in Formula 1. I’ll have more fun staying in CART.’ Formula One would have been fun, but it would be more fun to me to stay on in CART. By the time we did the test at Riverside I could see CART was taking off, so I made a decision not to do Formula 1. I don’t regret it one bit. I made the right call for me.

“It was tough to pass up everything I had with Penske,” Rick adds. “You couldn’t ask for a better team and I had all the faith in the world in both Roger and the team. I knew Formula 1 was a different world, probably more cut throat. There was also all the hassle of the extra traveling and having to think about living in Europe. I decided it was best to stay with Penske and stay here in the United States in the CART series.”

And who could blame him? Mears found a home with Penske like few drivers have with any team in the sport’s history and continues with the team today as an advisor to Penske’s drivers and engineers. For some great drivers, there’s more to life than F1.