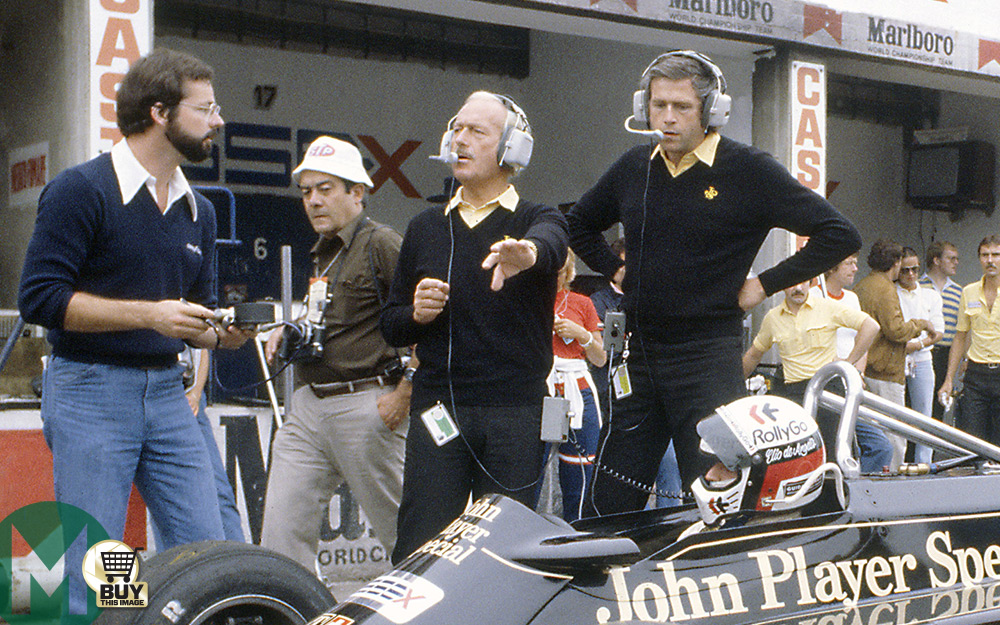 When did Formula 1 turn hi-tech rather than ‘merely’ clever and cutting edge?

Ask Peter Wright. As the founding father of active suspension at Lotus, he should know.

“It began to get technical at the end of 1977,” he says. “We put a data system, which Cranfield Flight Instrumentation had built for us, on a car [Type 78] to measure and better understand ground effect.

“Out of that analysis came the definition of active.”

What followed was a gradual uncoiling: “At the start of 1983, when we raced our first active car [Type 92-Cosworth], we had an onboard computer that wasn’t just recording them but having an effect on its dynamics.

“And it’s been hell ever since!”

Instead he had the green eye for team leader Elio de Angelis’ Type 93T; though a dog, it had a Renault V6 turbo in its tail.

Turbo grunt was deemed more pressing in the late-notice flat-bottom era and active was summarily dropped – until General Motors, new owners of Group Lotus, and Ayrton Senna expressed an interest in 1986-’87. 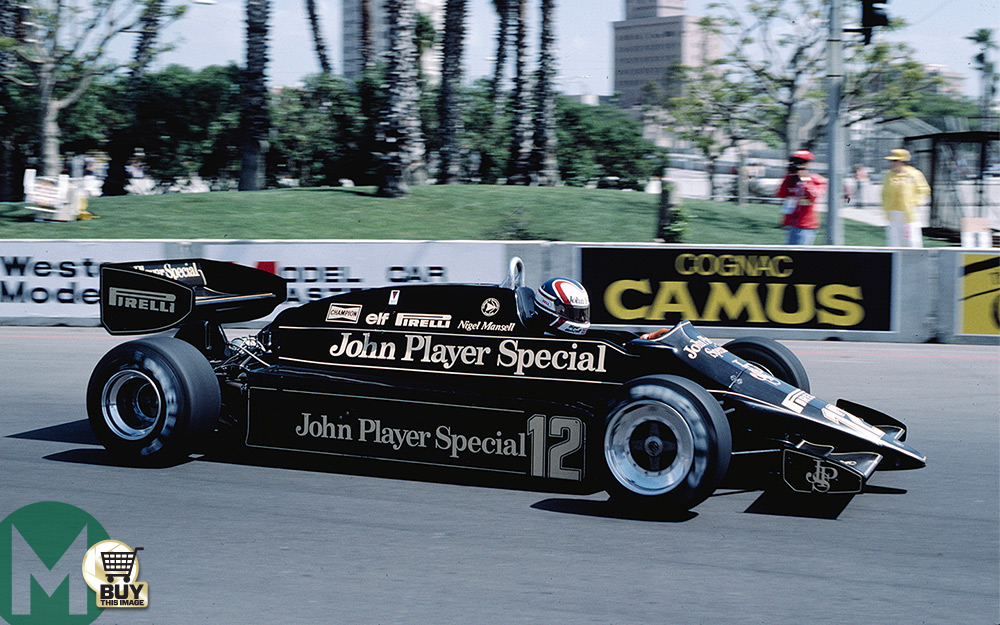 Wright was recalled to Team Lotus having spent the preceding four years honing active for road car use.

“[Laughs] Now I was trying to run an R&D department of 15, plus the F1 programme and the active system on the [IMSA] Corvette GTP car,” he says. “I didn’t have time to stop and think.

“I was the active suspension race engineer on Ayrton’s car. My job was to set up its suspension according to what he and [race engineer] Steve Hallam wanted.

“My side was doing data-analysis, too, and we fed that back to them. But they made the decisions and we executed them.

“In 1983, we had started data-analysis because active has lots of sensors and, therefore, you get lots of info for nothing, as it were. We didn’t have telemetry; we had to download it to analyse it. We were using an analogue computer with a digital interface.

“We had a fully digitised car computer and data system by 1987, unlike [new engine supplier] Honda who, on the other side of the garage, were plotting engine parameters on chart recorders. They photographed our data-analysis system like mad and about four races later had one just like it.

“The real potential of active was that you could change the attitude of the car to tune its aerodynamics. That’s why it got banned.

“You can vary front and rear ride heights according to speed, whether it was accelerating, braking or cornering. We didn’t have the simulation tools. We just had to learn, from scratch at every circuit, what worked where.

“We were all learning on the fly.

“[Technical Director] Gérard Ducarouge was very supportive. But I remember at a Donington Park test, at about midnight, when we were still trying to sort out the active and the turbo, ‘Duca’ saying, ‘This used to be fun. It isn’t anymore.’”

Except when you’re winning. 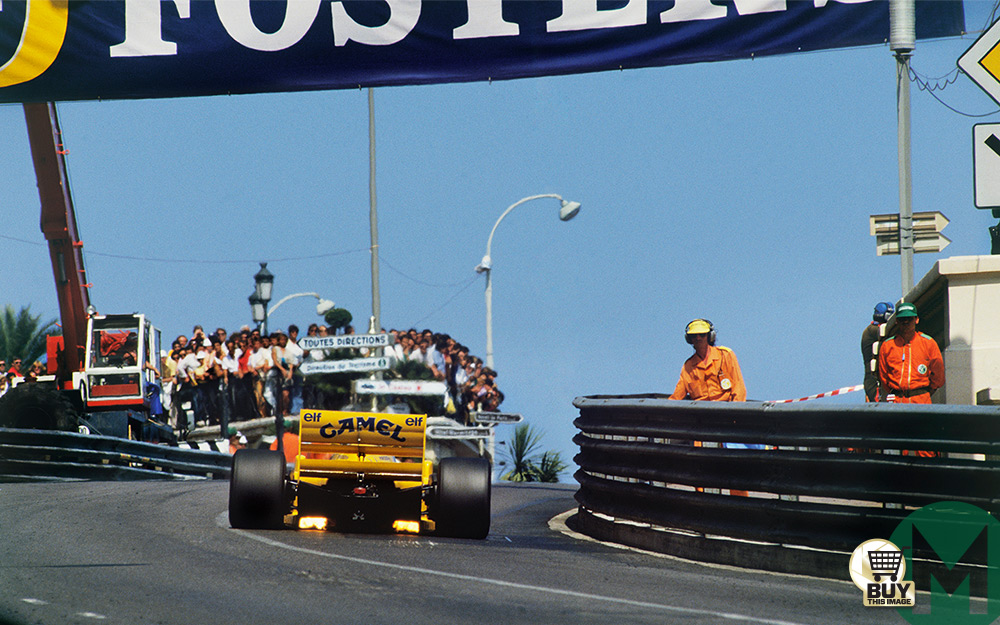 Senna’s back-to-back victories in Type 99T on the streets of Monaco and Detroit were high points of an impressive learning year: 57 points, third in the championship.

“They were fantastic highs,” says Wright. “On his slow-down lap at Monaco, Ayrton was shouting over the radio, ‘Wow! Yeah! Man! This is better than sex!’

“It’s easy to see why motor racing hooks people in.

“Plus they were the only two times that I was at a race when Team Lotus won; I didn’t go racing in 1977-’78.” (Wright was busy in Imperial College’s wind tunnel while the resultant Types 78 and 79 were blowing away the opposition.)

“Those wins were magical: Monaco, the most prestigious GP, and then Detroit, where all our engineering customers were – they meant a lot to Group Lotus.

“GM was already interested in active. They felt very threatened by the Japanese and were grasping for technology without, one might say, fully understanding what they were doing.”

It was to this “funny bunch” that Wright returned with Group Lotus when Team Lotus abandoned active for 1988.

“That decision – a financial one, probably – was a mistake,” he says. “We had done all the hard work and were poised to make the most of it.

“Active suspension had already given us an advantage when tyres were marginal.”

Despite running non-stop in Detroit, Senna set fastest lap in response to Nigel Mansell’s charge immediately after pitting for fresh rubber for his pole-setting Williams FW11B-Honda.

The latter’s race was subsequently hampered by leg cramps – he limped home fifth – whereas Senna finished the race “feeling brand new”, his suspension having insulated him from Motown’s lumps and bumps.

At Monaco, he hadn’t even bothered to tape his gearchange hand.

“I don’t think a racing driver really minds about the ride,” says Wright. “He is only interested in grip. But the ride element of active affected how the tyres performed, albeit in ways that we did not yet fully understand.

“Ayrton did a very good analysis: ‘Ultimately, the car is as quick with active but, in qualifying, it takes much longer to get the tyres to work. Once you get there, however, you can sustain it, whereas the passive car hits a peak and falls off.’

“As such, he used to spend real effort on getting the race set-up right. He had a car that looked after its tyres and that’s what enabled him to win.

“But, being Monaco, the driver comes into it a hell of a lot, too.”

Senna’s move to McLaren for 1988 was a huge blow to Lotus.

“He said one or two things to me that indicated he didn’t think Team Lotus was doing the right thing,” says Wright. “Ayrton saw it coming.

“In some ways it was nice to leave [Team Lotus]. Though they were good days, they caused me a lot of white hair; 1983 had been particularly hair-raising because we were really experimenting.

“Had we been able to go on with active we would have understood what it was doing to tyres – and that would have been a big breakthrough.

“Team Lotus should have kept on with it – just when other teams were investing heavily – and gained an advantage. Maybe then it would have kept Senna and Honda.

“After active was banned in 1993, Patrick Head told me that Williams would have had to use next a full active system like ours.”

By which time Mansell had completed F1’s then most dominant campaign thanks in the main to Williams’ more pragmatic ‘reactive’ suspension, and Wright was back with a Team Lotus in its death throes.

Though it had one more season left in its locker, the name that epitomised F1’s clever and cutting edge had scored its final GP victory: Senna at Detroit – three weeks after he had helped turn F1 properly hi-tech.