The Haas driver posted a picture showing some of the bandages removed from his hands, which suffered second-degree burns in the fireball that erupted after his car was split in two.

Grosjean won’t be returning home, but will stay in Bahrain as he continues to recover.

Pietro Fittipaldi will replace him in Sunday’s Sakhir Grand Prix but he is hoping to return for his final race with Haas in the Abu Dhabi Grand Prix next week. 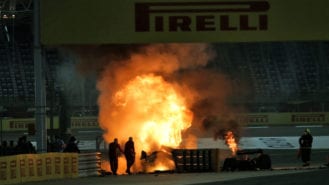 “Romain Grosjean was discharged from the care of the Bahrain Defence Force Hospital at 10.30am local time Wednesday,” said Haas in a statement.

“Grosjean spent three nights in hospital following Sunday’s incident. He will continue private treatment for the burns suffered on the back of his hands and will remain in Bahrain for the time being.”

This morning, he showed how his recovery is progressing with an photo of uncovered fingers on his right arm. “The happiness I had when I was told that I didn’t need the full dressing any more and could use my finger was huge,” wrote Grosjean. “Almost cried. A victory on my way to recover.”

My right hand this morning. The happiness I had when I was told that I didn't need the full dressing anymore and could use my finger was huge. Almost cried. A victory on my way to recovery pic.twitter.com/QuZojM1mZe

Next weekend’s race in Abu Dhabi is likely to be the last chance Grosjean has to race in Formula 1 for the foreseeable future, as he and team-mate Kevin Magnussen will be replaced by Nikita Mazepin and Mick Schumacher next season.

“He wants to be in Abu Dhabi,” said Haas team principal, Guenther Steiner yesterday. “I said ‘try to get better, we speak on Sunday or Monday and see if it’s doable’.

“We’ll cross that bridge when we get to it. Pietro is here, Romain is here. We just need to see how he feels. It depends on his health.”