The problems persist at Mercedes as the reigning constructors’ champions cannot find a quick fix for the W13.

In Saudi Arabia, both of its drivers went different routes with car set-up and experienced vastly different fortunes on Saturday and Sunday.

Lewis Hamilton’s “set-up experiment gone wrong,” as team boss Toto Wolff called it meant he paid a hefty price on Sunday. He struggled to an eventual P10 finish having qualified a lowly 16th on the grid.

On the other side of the garage, George Russell appears to be finding his feet at Mercedes. Having overdriven in Bahrain according to the team, Russell put in a solid performance to leapfrog his team-mate in the drivers’ championship.

Hamilton isn’t accustomed to struggling in the midfield with Mercedes and less so seeing his team-mate far ahead on the grid.

Whether it’s an isolated setup issue or a deeper problem with the car, the seven-time champion has a challenge that he hasn’t faced for several seasons. 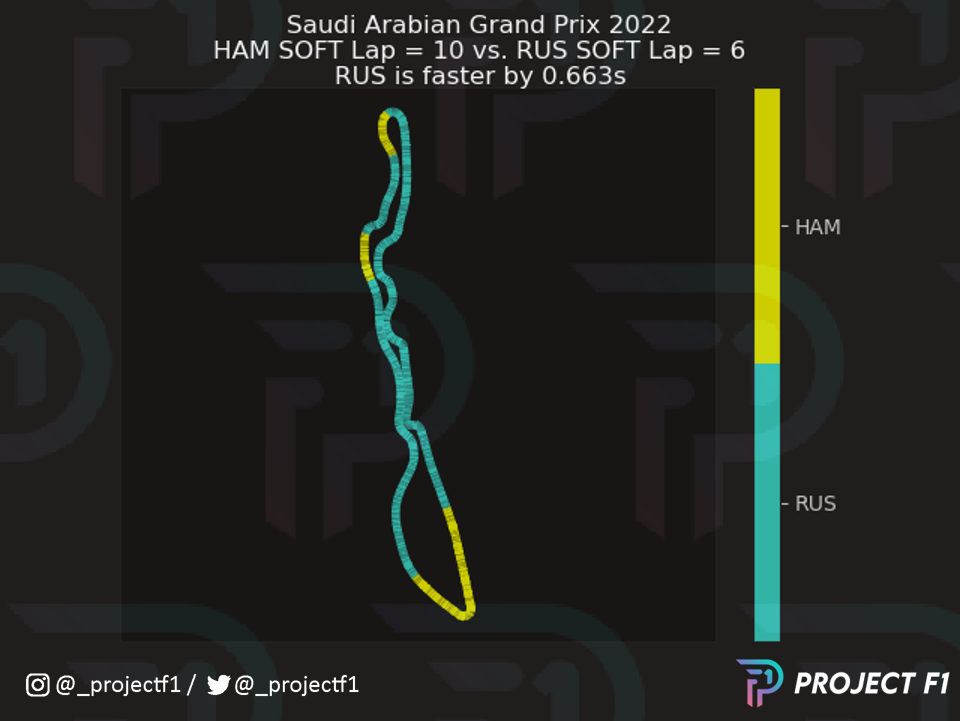 It has been a difficult start to the season and after the opening two rounds we have confirmation that after the team’s dominance for last eight years, the Brackley/Brixworth machine has faltered.

Mercedes’ lack of pace in Bahrain came as a surprise to many, and while expectations have readjusted, few would have been prepared to anticipate a variation in performance quite like that displayed in Saudi Arabia.

Hamilton had a shock Q1 exit. However, it was the deficit to his team-mate Russell that was a greater cause for concern.

The best laps from Q1 are shown in Chart 1 above. Russell was faster by almost 0.7sec compared to Hamilton. Russell had a greater average speed across majority of the minisectors throughout the lap, with Hamilton only noticeably faster in the final corner and subsequent traction zone. 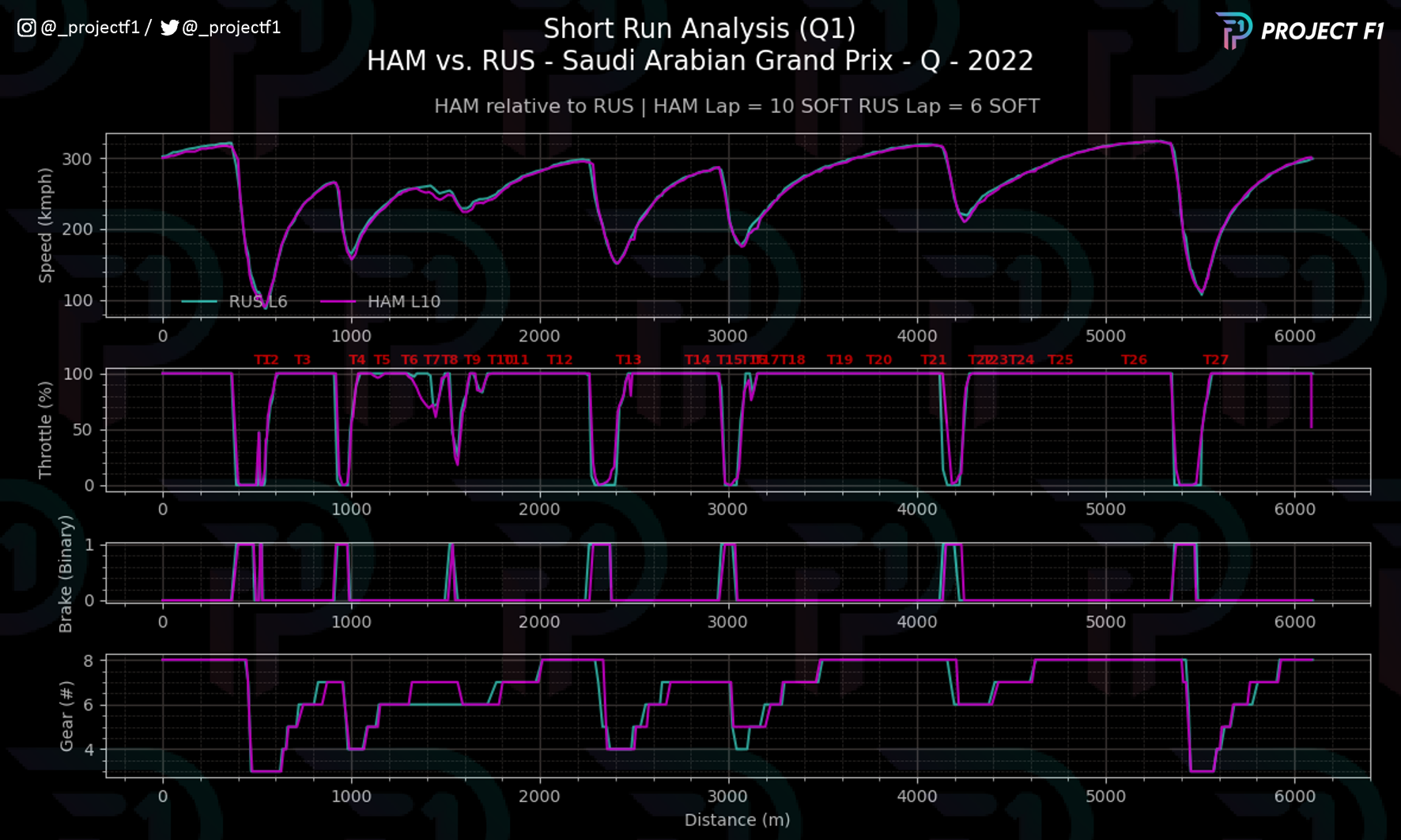 A closer look at the telemetry reveals that Hamilton had a tough time through sector 1, losing time on the main straight into Turn 1. Hamilton had to fight the car meaningfully through Turns 5-10, having to come out of the throttle to manage the inconsistent grip mid-corner. Russell had no such concerns as evidenced by the higher cornering speeds and stronger throttle trace.

While Hamilton lost a lot of time in the first sector, he continued to lose out through the rest of the lap, with Russell able to achieve greater top speeds. This was also helped by the fact that Russell was able to get better traction out of corners onto the straights and hence build greater top-end speed.

Hamilton was able to recover some of the deficit into the final corner, but it was only marginal and never going to come close to overcoming that deficit.

Post-session briefings point issues in car set-up being the culprit. And while data such as this helps identify Hamilton’s complications, it isn’t enough to definitely say what those specific set-up issues are – beyond identifying a car that wasn’t well balanced, suffering from some drag and/or power unit issues.

In any case, Hamilton finished qualifying in P16 while his team-mate went onto to qualify sixth, a massive difference in performance and on a track that is fast, narrow and difficult to overtake. 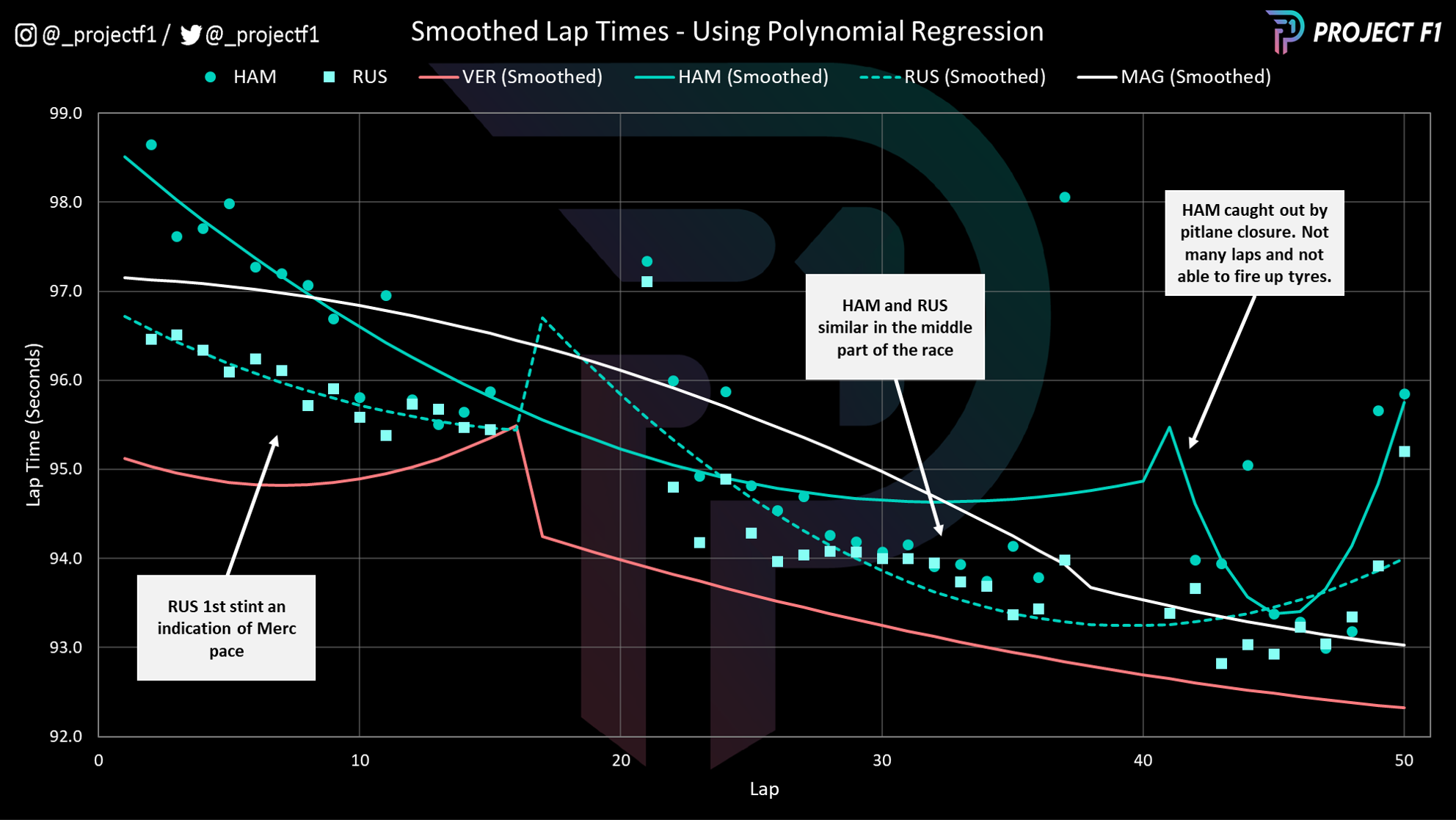 Ordinarily it makes a lot of sense to opt for the alternative strategy (start on the harder tyre and switch to the softer tyre later in the race) when starting down the field and out of position. But this strategy is worth reconsidering when you are racing on a street circuit that has a high propensity to produce a safety car.

Why? Because unlike those drivers on softer tyres, you won’t be advantaged by taking the early pit stop to save on ‘pit stop time’. The benefit of gaining track position by staying out remains, but the gamble depends on being able to overtake effectively in the latter parts of the race.

Once again, given the tight and narrow track at Jeddah, this was going to be another tall order, especially without a clear pace advantage like that of the 2020/2021 Mercedes cars.

Hamilton had a difficult first stint given the harder tyre and dirty air from all the traffic. Russell on the other hand enjoyed a lot of clean air running, and was able to make full use of the safety car when former team-mate Nicholas Latifi hit the wall.

The second stint was still favourable for Russell, although he wasn’t extracting stellar pace from the tyres when compared to Hamilton who was able to match Russell’s pace on different occasions despite the older rubber.

A reference to Max Verstappen and Kevin Magnussen are included to compare to the pace at the front as well as another driver on a similar strategy and pace to Hamilton. It’s worth noting that Hamilton wasn’t able to extract the best performance out of the medium tyre compared to Magnussen. Mercedes is still well off the pace of the front runners. 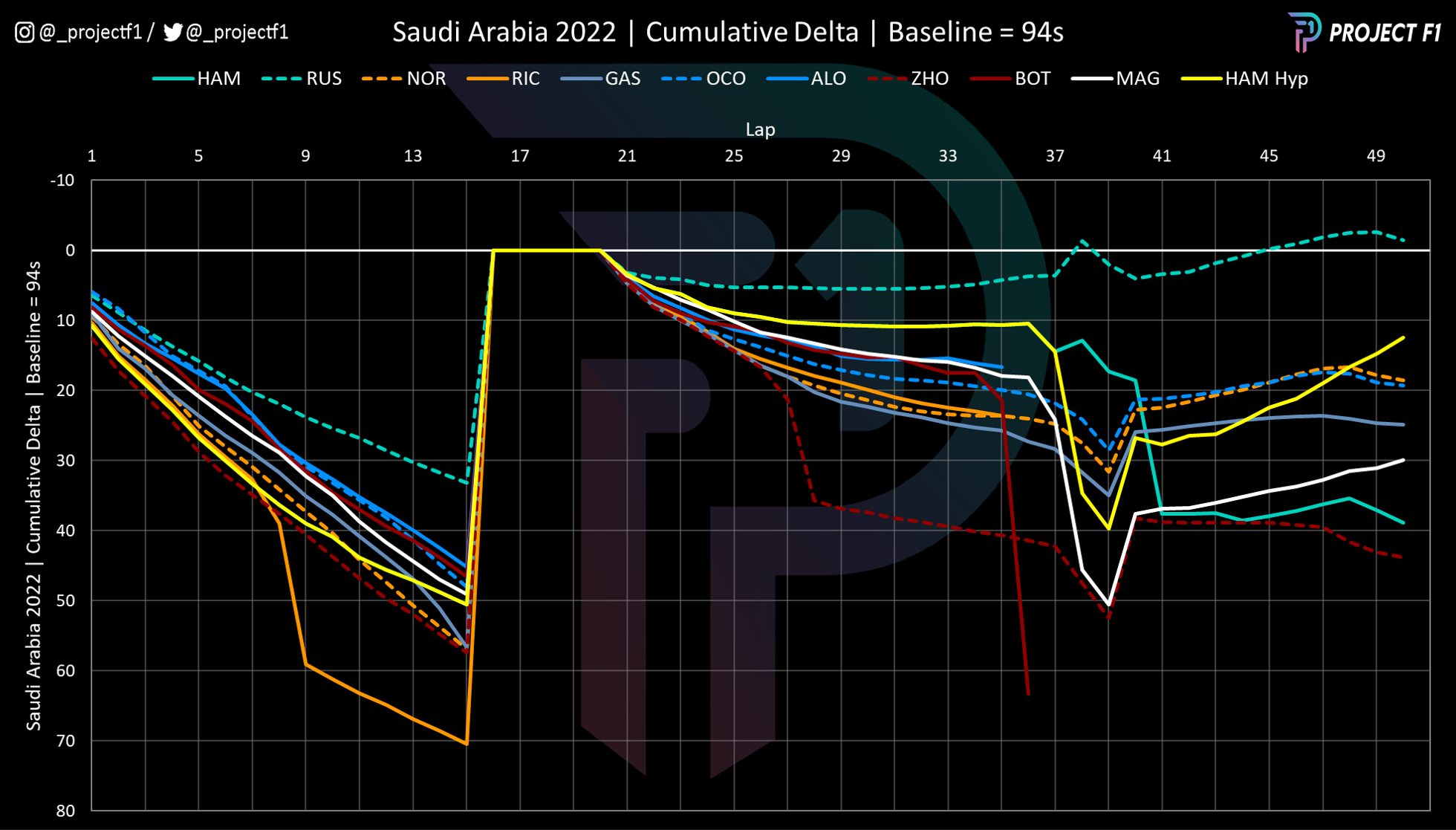 No doubt, Mercedes had fingers crossed for a late-stage safety car to be able to grab a cheap pit stop. And it arrived, although it blocked access to the pitlane which left Hamilton marooned on track for another few laps, while Magnussen and Nico Hülkenburg were able to squeeze in and capitalise.

In this analysis, we explore what Hamilton may have been capable of had he been able to sneak in a pit stop under VSC conditions, noting the following assumptions:

These assumptions are bold and very much represent the best of what Hamilton could have hoped for.

With all of this though, Hamilton still only just managed to create a reasonable gap to Ocon. This analysis also fails to account for any hindrance from dirty air, tyre wear or difficulty in overtaking, all of which could mean that Hamilton actually stayed behind both Ocon and Norris.

This is probably a more realistic outcome, especially when considering that Hamilton’s actual performance didn’t deliver scintillating pace in the final stages of the race.

Nevertheless, Hamilton could have been on for a P6 finish at best and P8 finish as a baseline had he got the chance to pit earlier.

Though the high prevalence of retirements that meant Hamilton had less people to fight as well is also worth keeping in mind.

In any case, Hamilton missed the mark in qualifying and paid for it on the Sunday. There are no signs yet that Mercedes’ woes are turning the corner either. 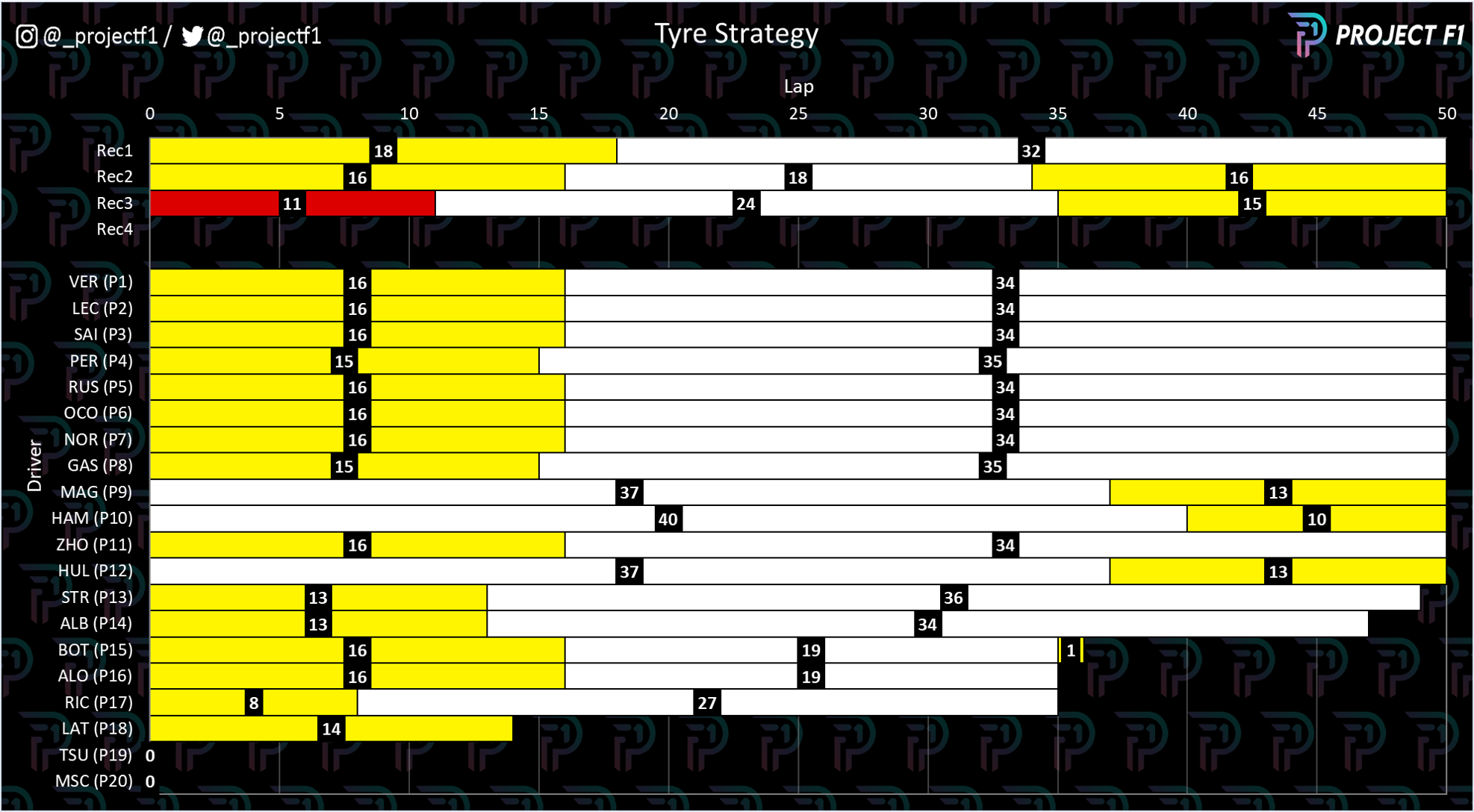