A late-race safety car brought the Brazilian Grand Prix to a brilliant crescendo, but safety was still the primary concern 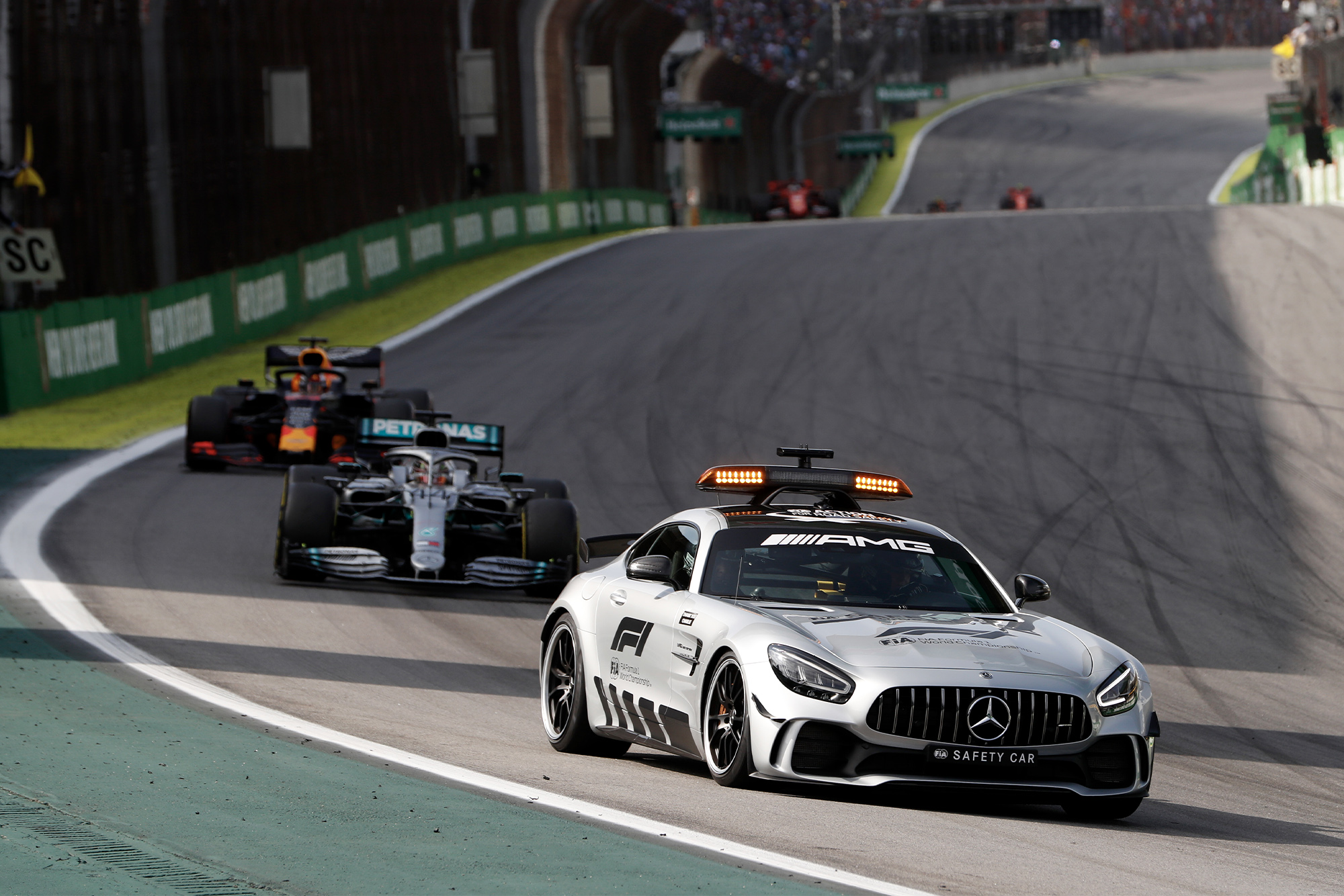 The Brazilian Grand Prix had it all on Sunday, the race really came to life when the safety car was deployed to recover the stricken Mercedes of Valtteri Bottas on lap 52.

The move bunched up the field, triggered a number of tough strategic calls that mixed up the order and the ages of tyre that drivers were on and set up a sprint finish to the flag that was going to be filled with all sorts of drama.

At first glance, it seemed strange that the safety car had been called for. Bottas managed to park his car on the inside of the track, completely out of the firing line and it simply needed pushing back behind the barriers through the gap he had stopped by. So why was the safety car deployed? FIA race director Michael Masi explains…

“Valtteri did a fantastic job where he stopped,” Masi admits. “It was trying to push the car back into the gap, which is why we had double yellows because we had the marshals there. Because it was off the track [double waved yellows were enough] but the car got stuck on the bump, so we actually had to deploy the crane to move it out.

“For me, as soon as a crane is deployed that is a straight safety car … It was a combination of the bump, [the car in] neutral and in that situation once you’ve got three or four marshals there trying to push it and couldn’t get it anywhere. That’s why we deployed the safety car.

“Obviously as soon as I’ve got to use a crane it’s a safety car. That completely changes it [from a VSC] and because of where it was, being off track, is why I covered it under a double yellow flag originally.”

When the crane is in use, a safety car allows the FIA to control the speed of the pack, slowing significantly more in that sector of need, while also creating big gaps once the whole pack has passed through for the marshals to work in. 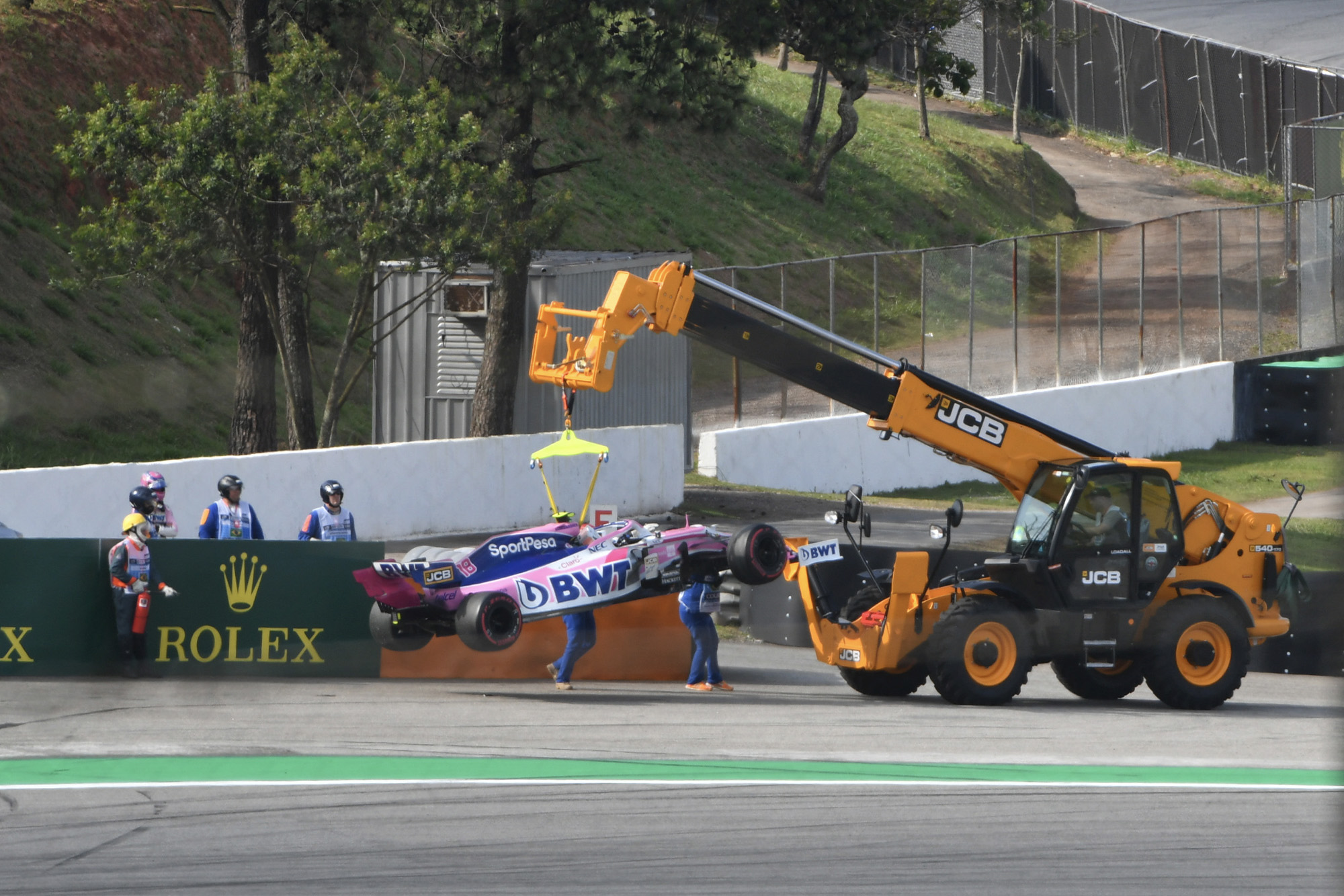 Lance Stroll’s car is hoisted away after he became a victim of debris on the track Photo: Motorsport Images

The race didn’t restart for six laps after Bottas stopped, allowing a number of drivers to pit but also due to the decision to let lapped drivers overtake. On a short circuit such as Interlagos, doing so means they can quickly catch up again, but on the flip side it can take more than a full lap until the final car has made its way past the pack.

Although this delays the restart, it allows for a much cleaner one. It’s not just that lapped cars could interfere in a lead battle, but they are also having their own race and are often lined up with another car they are directly competing with, which can lead to all sorts of problems on a restart as they are faced with a fierce fight at the same time as blue flags.

At this point, it is up to the FIA’s discretion. If there is a safety reason not to allow the cars to un-lap themselves, then the order will be maintained. This also happens on tracks where it is particularly hazardous to do so, such as street circuits like Monaco and Singapore. The latter saw lapped cars not allowed to overtake ahead of a late restart in 2017.

On Sunday at Interlagos, when Bottas stopped only the top five cars were still on the lead lap given the short nature of the track, and while Max Verstappen and Lewis Hamilton were running together until the leader pitted, there were ten cars in the queue between Hamilton in second and Sebastian Vettel in third.

Added to a number of pit stops being carried out, that resulted in a lengthy spell before the race was resumed. Once all lapped cars have passed the safety car, race control will restart at any point but with so many catching the pack back up rapidly the full order was allowed to form.

It was a different story for the second safety car, where debris required marshals to go onto the track, necessitating the intervention. Similarly, teams are aware that if a driver is potentially injured, the safety car will be deployed regardless in order to allow the Medical Car on track too.

On the second occasion so close to the end of the race lapped cars were not allowed to overtake as it would have meant only one lap at racing speed would have been possible.

The time the safety car is left out in this instance relates to how long it takes for race control to be informed all debris has been cleared and to try and get a visual from the safety car driver too.

As seen with Lance Stroll’s retirement, any debris can take out another car so the marshals have to be thorough but can only do so once the pack has formed behind the safety car and therefore creates a window of empty track for them to work in, rather than when the cars are all spread out around the circuit, even if they are travelling at a reduced speed.

Masi can then make the decision to call the safety car in as late as he wants, again as long as he deems it safe to restart. To make the call too late gives drivers little time to prepare, and cold brakes and tyres are not helpful barreling into Turn 1.

A late decision does prevent excessive games from the leader, however, with Verstappen almost forced into his late launch given the fact the safety car was only called in a few corners earlier. With so much at stake so close to the end of the race, perhaps that wasn’t unintentional.

Ultimately, the clue is in the name, but safety is the number one trigger for both the safety car being deployed and then being called back in. The FIA erred on the side of caution on Sunday, but it’s much better to do that and be accused of spicing a race up intentionally than be accused of trying not to influence the way a race is panning out at the expense of the drivers’ and track workers’ safety.