Of course we should listen whenever a seven-time world champion speaks, but I think we can turn a deaf ear to Michael Schumacher’s volley of verbal bullets at Pirelli.

Why? Because he didn’t complain when Mercedes-Benz occupied the front row in China and team-mate Nico Rosberg scored the marque’s first World Championship Grand Prix win since 1955; nor did he when Bridgestone favoured his Ferraris. Plus he’s been around long enough to know that what goes around comes around: witness his travails with Bridgestone’s non-stoppers of 2005. Subtextual translation (using my other ear): these current tyres suit neither me, nor, more often than not, my car. 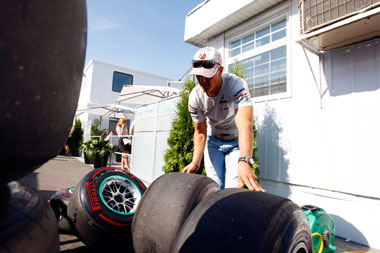 Schumacher is not alone, to be fair. Among others, even happy-go-lucky Jenson Button has had a grumble. And they have a point: the set-up sweet spot is smaller than it has ever been. It’s a moving target, too, minimal – air and track – temperature changes causing wild swings of degradation and pecking order.

But that’s good, not bad.

Okay, drivers can’t grab their cars by the diff. That must be frustrating, yes. But so what? Speed, within reason, is contextual. I have always been quick to shout at the TV whenever a director has lingered on a car in qualifying that is obviously on an in-lap. Yet a wheel-to-wheel dice has me purring no matter what the (F1) speed at which it is being conducted. Michael, you might be having to pussyfoot at the moment, but it’s making for great viewing.

Speed, to a point, isn’t everything. Fair-weather watchers of motor sport are discombobulated when I explain that an F1 car is more than 30 seconds faster around Silverstone than is a MotoGP bike. It’s not difficult to understand their confusion given the latter’s ferocious acceleration, eye-bulging top speed and dangling acrobatics of its rider. 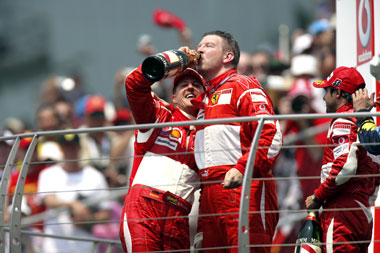 Schumacher and Ross Brawn were the undisputed masters of pedal-to-the-carbon fibre sprint-stop-sprints when they were at Ferrari. Their domination, however, though impressive and praiseworthy, didn’t often make for compelling racing. Indeed, I’d be amazed if Michael could list all of his victories from that period, in chronological order or otherwise.

So don’t worry, Michael: we were aware of you and your team’s 2012 Pirelli problems even before you voiced them. Should you score your 92nd win this season, we will, therefore, place it above at least, say, 79 or 82 of your others. 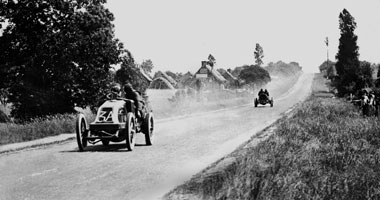 We also know that you are in good company. Looking after your tyres, maximising any advantage that they might proffer, are invaluable skills as old as motor racing. Renault’s Michelins, on newfangled, quick-change detachable rims, undoubtedly gave it an edge at the 1906 French GP (above). Blue-blooded Prussian tyro Manfred von Brauchitsch was spectacular over a lap and caught the eye more than did his Mercedes-Benz team-mate Rudi Caracciola, denied that final tenth by injuries sustained at Monaco in 1933. But canny ‘Caratsch’ was the go-to guy in the races, in an era when tyre technology was pricked and deflated by a sudden spike of horsepower. Stirling Moss’s cheeky Cooper crossed the finish line victorious in Argentina in 1958 running on the canvas of its Continentals.

Coping with a racing car that doesn’t get your juices flowing is another motor racing motif. Moss didn’t much like the 1957-’58 Vanwall (below) – a handful after the sublime Maserati 250F – but he appreciated the fact that it was faster than the Maser, and enjoyed winning in it. Ditto his Lotus 18, which, when he wasn’t winning in it, appeared determined to kill him. Jackie Stewart’s twitchy Tyrrell of 1973 was no sinecure, but he made the most of its strengths, ameliorated its weaknesses and gave a master class of how to win a world title. And the turbo titans of the 1980s had to switch their attention from boost gauge to fuel readout come the races. 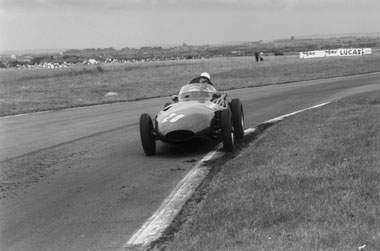 As for Pirelli, it should be commended for its success in spicing up the racing, as requested by the powers-that-are. Such is the robust reliability of the modern GP car, so rare is the missed gear, so unsettling is its dirty air, so short are the braking distances, so accommodating of drivers’ errors are modern circuits, the tyre – its chemistry, physics and black art – is the only arrow left in F1’s quiver of uncertainty.

Perhaps it has gone a mite too far: 11th on the grid, unused rubber snug in blankets, should not be the next most advantageous position after a slot on the front row. But it’s a close-run thing. The quicker teams still reason it worth gunning for pole; the soft-shod Lotus of Kimi Räikkönen, who started from 11th with a full suite of fresh rubber, was quicker than Sebastian Vettel’s Red Bull on (worn) Mediums during their second stints in Bahrain, as it was when their tyre choices were reversed for stint three; but Vettel, on his only fresh set (of Mediums) consolidated his lead in stint four to win – from pole. There are still genuine, calculable, workable choices. It’s still a meritocracy rather than a lottery. Yes, it’s a fine line, but that’s fine.

Perhaps we should return to the kind of unfettered qualifying free-for-all that Jim Clark and Ayrton Senna knew – and dispense with parc fermé while we’re at it – before bowling the teams a rubber googly or two for the tanked-up races. Certainly, we could get rid of DRS and not ‘miss’ it if Pirelli continues to be ‘at war with itself’. But there’s no rush. Stable patterns will emerge naturally as this season progresses; teams will relentlessly home in – slew of new bits, raft of new ideas – on the perfection that they always seek.

As it stands, however, neither they, nor you, nor I can predict with any confidence the winner in Spain. What we do know is that any victorious team will have had to sprinkle some set-up magic and call all the right strategic shots, and that its driver will have driven as fast as possible in difficult circumstances; he might not have worked up a sweat, but his brain, like his team’s, will be aching.

As racing aficionados, we could ask for no more.

So get a grip, Michael!