“We needed at very short notice to get a replacement for Bertrand [Gachot]. Schumacher was available this weekend, he has no other commitments. I’ve seen him in Formula 3 and the team has this attitude to give youth a chance. We think it’s a progressive way to see what the potential of Schumacher is for the future,” eponymous Jordan team boss Eddie surmised ahead of the weekend.

That potential turned out to be 91 grand prix victories and seven world championship titles. Not too bad then.

Nobody on the grid in ’91 envisioned Michael Schumacher as the next big thing in Formula 1, a driver that would tear up the record books, set benchmarks thought surmountable and along the way, become the most successful driver in F1 history.

As the cars left the grid for the 1991 Belgian Grand Prix there was more than a fair amount of speculation as to just what this newcomer was capable of achieving. Would he build on his work from Saturday with an impressive Sunday performance and points on debut? Or was it all a mirage, the Jordan set to slip backwards in the hands of its young charger?

He fired off warning signs that he was more than just a solid replacement driver. Qualifying well clear of team-mate Andrea de Cesaris was a solid start, but Schumacher was very honest in his assessment of what he’d done, hinting that he had driven within the car and wasn’t yet pushing the very limits of what he or it could do.

“I’m really happy [with qualifying] but I have to say, with this car, you can do this qualifying time but it’s a lot of fun to drive,” he said after the Spa quali session. Ever so slightly ominious for a rookie to be honest upon reflection that there had been time left on the table.

After all, he only had the likes of Nelson Piquet, Gerhard Berger and Nigel Mansell in front of him, not to mention two of the sports all-time greats in Alain Prost and Ayrton Senna lining up ahead.

But that work ethic, feel for the car underneath him and mental fortitude were elements that proved crucial for the future and pieces of a puzzle he’d masterfully put together to a degree never before seen in F1. 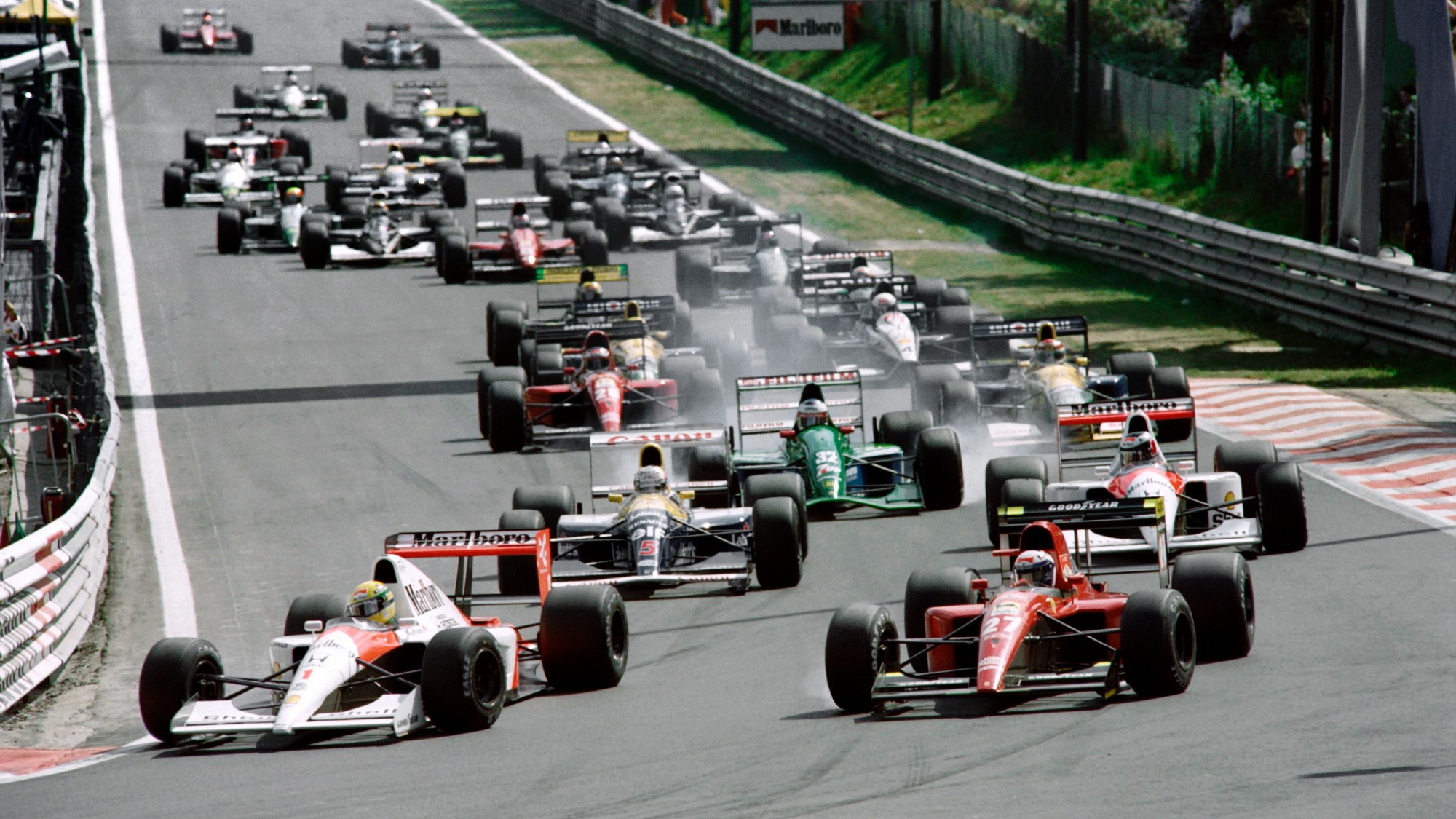 Schumacher was not intimidated by the big names around him

“He was incredibly into the detail and wanting to pour over the day’s work with his engineers and unhappy if he wasn’t spending every hour God sent on the test track,” James Allison, who worked at Ferrari with Schumacher during the glory years surmised in the December 2020 issue of Motor Sport.

“He’d routinely finish each year head and shoulders above everyone else in terms of kilometres spent testing and that wasn’t when he was hungry for his first championship. That would be after his third, fourth and fifth championships. He was still out there just wanting to pound round Fiorano and Mugello, or anywhere else.”

But well before the championship successes, these were signs of something special. A clutch failure ended his hopes on the opening lap in ’91 at Spa but not before he split Jean Alesi and Piquet immediately off the line and set about hounding the three-time world champion after peeking at the gearbox of Berger’s McLaren. Point proven, Schumacher wasn’t one to be intimidated. He’d shown raw speed, left a strong impression on the team – so much so that Jordan went to court in an unsuccessful attempt to retain his services for the remainder of 1991 – and had a level head in the face of incredible pressure, all Schumacher hallmarks from various stages of his record-setting career.

Points at the following three races with Benetton and two of those ahead of Piquet only cemented his potential and from there, he never looked back.

“We had some tough times,” Ross Brawn told Mark Hughes in 2014. “We grew up together at Benetton. My formative years as a technical director were his as an F1 driver and we both made mistakes, were both wet behind the ears. That really made our relationship very special; we went through all that controversy together and stood by each other. It was a bit traumatic at times. It was like we’d been in the trenches together; we came out the other side after a lot of pain and aggro.” 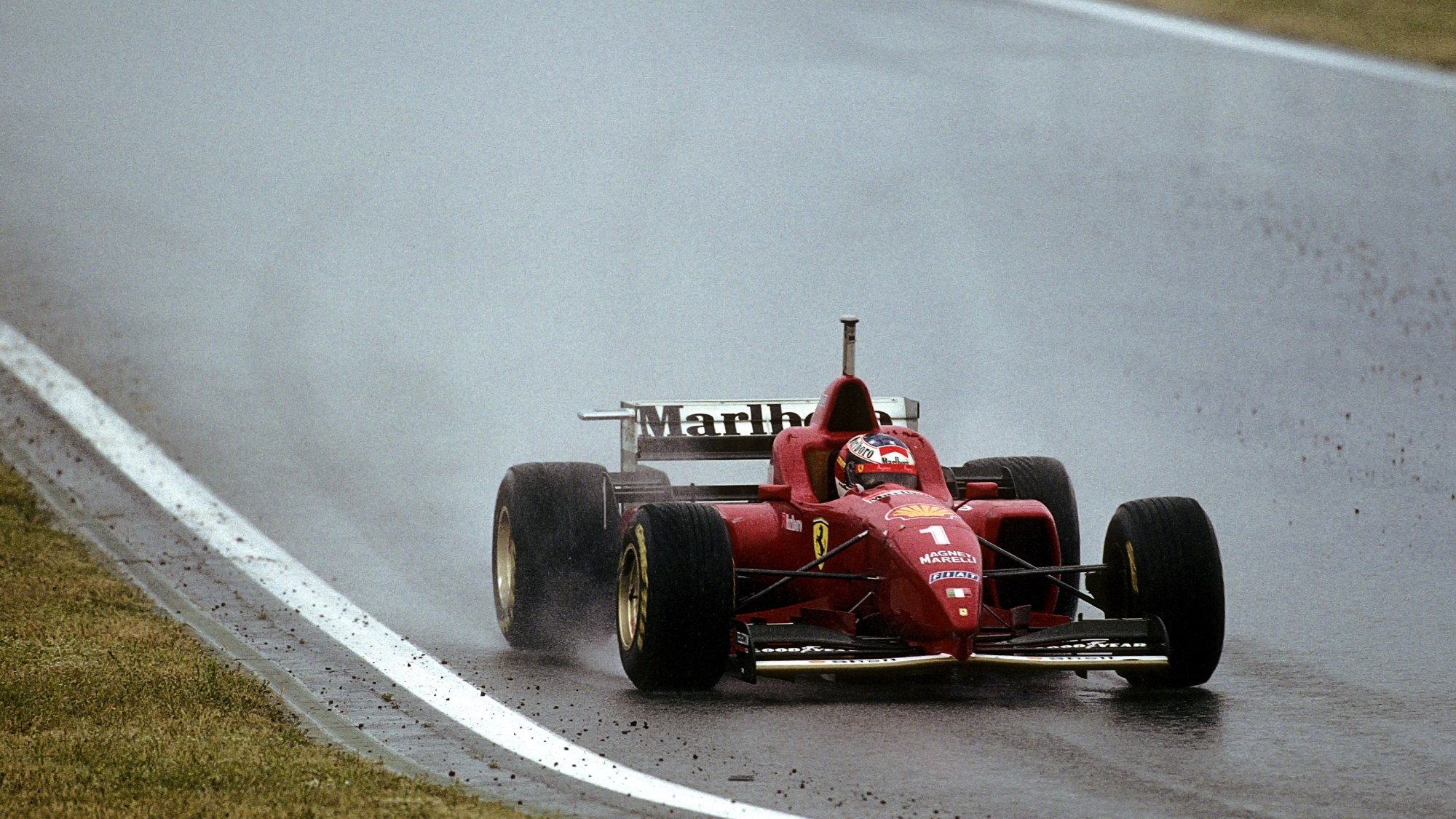 The Rainmesiter dominating in the spray at Barcelona

His Spanish GP sequel in ’92 and sixth-place finish was another sign of what was to come. Two years later at the same track, he took his third career podium with a mighty drive having been stuck in fifth gear for the majority of the afternoon in one of his greatest drives. One year on from his debut, Schumacher secured his first F1 victory at the scene of his maiden outing. He’d made an error on wets but was in at the end of the lap for slicks in a move that while counter-intuitive on paper, won him the race. He compartimentalised the error and earned his first win. 90 more would follow.

He achieved two titles at Benetton but the majority of his achievements came with Ferrari where, along with Jean Todt, Rory Byrne and Brawn, he formed a dynasty the likes of which took the might of Mercedes-Benz and Lewis Hamilton to replicate. It was at Ferrari where Schumacher became a legendary figure in the sport.

Those that worked with him at Maranello saw what the earlier potential had turned into, a superstar in the making.

“He would do 76 laps looking like an accident about to happen,” Eddie Irvine told Motor Sport. “It was insane how he could do that. You give him an unbalanced car and he could just find a way around it; it didn’t really matter. That 1996 Ferrari was possibly one of the most pitch-sensitive cars of all time. It was horrible. But he just had the feel to adjust himself around it. That’s why he ran out of brakes in Imola that year because he had wound them so far to the front to try to stop the thing spinning. It destroyed its rear tyres because it was so pitch sensitive. To drive it like that took unbelievable ability.”

His 1996 Spanish GP victory added to the mystique of a driver going from strength to strength as the team put the pieces into place for unrivalled domination. Lapping at times several seconds quicker than any rival, he cruised through spray to take a famous victory. 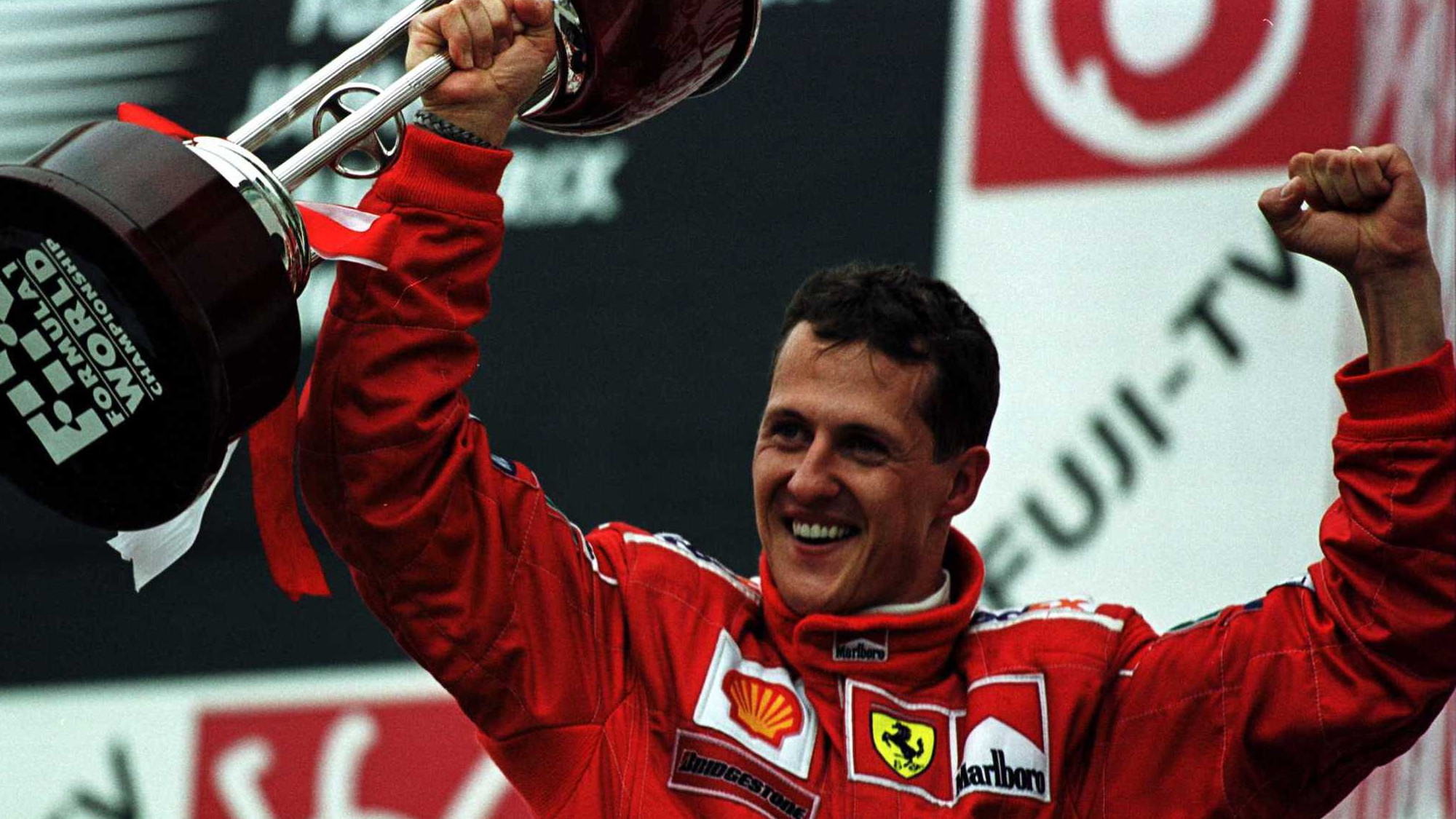 Nine years on from his debut: world champion with Ferrari

“He could make any old rubbish go fast, It really didn’t matter if the car was ill-balanced or a bit of a pig, he would find a way to drive it round a lap and get pace out of it,” Allison added.

At the turn of the century, he finally achieved what he’d set out to back in 1996 and became the first driver since Jody Scheckter to win the world championship in the red of Ferrari. He was no longer at the wheel of difficult designs but a championship-calibre goliath no one would topple for another five years.

That didn’t curtail any tenacity or desire to extract the maximum though. Just like the strong impression he left on the Jordan team back in 1991, his interpersonal skills only added to his capabilities at Ferrari.

“The thing I found that certainly drew him to me, and I think anyone who had the privilege of working with him would say the same, was that he was very generous towards the people in the team, making them feel part of his championships, part of his successes,” Allison said. “He made it feel to us like it was a team success and our part in it was real and he was grateful for it. That really does have the effect of galvanising a group of people to give their very best for you. Which is part of success in Formula 1.”

So while it was at Ferrari where he captured the most accolades and became a legend, the signs were already there on debut at Spa-Francorchamps, he just needed a little time to put it all together.