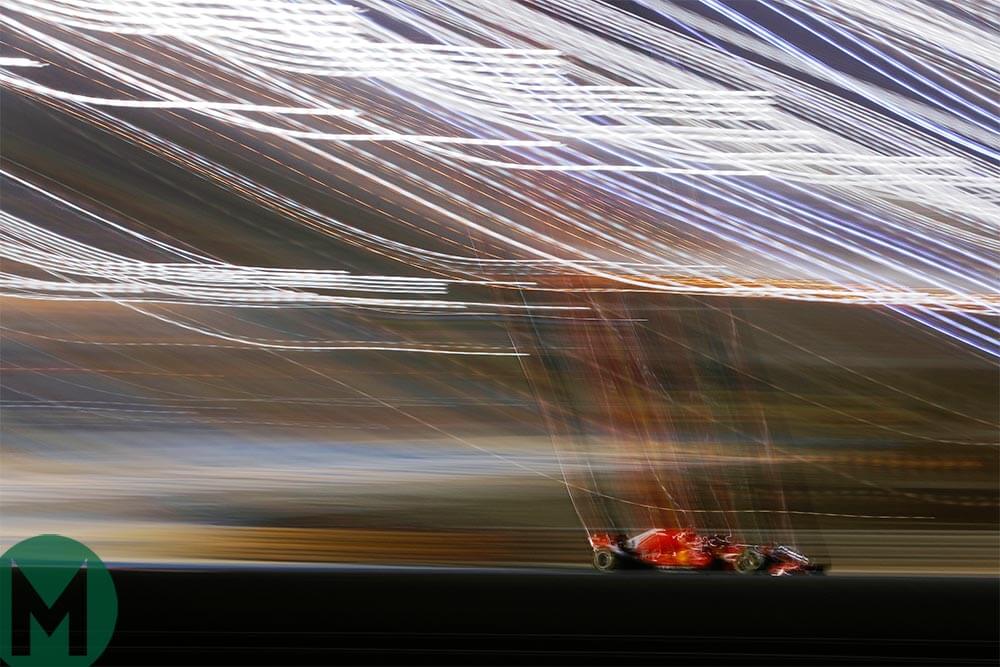 Sebastian Vettel held off a closely chasing Valtteri Bottas for victory in the Formula 1 Bahrain Grand Prix on his 200th start while Lewis Hamilton recovered from ninth for a third-place finish.

Ferrari’s gamble to have Vettel finish the race on a one-stop strategy paid off as he completed a 39 stint on soft tyres, holding off Bottas by 0.699sec at the flag.

“These tyres were done, they were done for the last 10 laps,” said Vettel as he celebrated the win.

Kimi Räikkönen was on course for a podium but an unsafe release from the pits, Ferrari’s second of the weekend, stopped his race short in the pitlane. He ended up with a rear-left soft tyre and three new supersofts, and one mechanic was hurt in the process.

Hamilton started the race in ninth after a five-place grid penalty due to a gearbox change, but took the last place on the podium with a successful a one-stop strategy having started on softs and ending on mediums. An early triple overtake on Nico Hülkenberg, Fernando Alonso and Esteban Ocon signalled the defending champion’s intentions and soon after it was Kevin Magnussen who was powerless against the soft-shod Mercedes.

Red Bull’s fortunes contrasted as Max Verstappen retired after a puncture which he suffered having grazed Hamilton’s front-wing on lap two and Daniel Ricciardo’s RB14 coincidentally shut down. A virtual safety car followed.

Pierre Gasly, having qualified sixth, benefited from the retiring Red Bulls and finished fourth in his Toro Rosso – the highest finish for a Honda-powered F1 car since the 2008 British Grand Prix. A brief charge from the Haas threatened his place early on.

Haas took fifth through Kevin Magnussen’s two-stop race, though tempers flared between team-mates halfway through the race and the outfit ran a split-strategy, bringing in Magnussen before Romain Grosjean. Grosjean finished 15th as a loose bargeboard forced him to pit for repairs late on.

After a tame qualifying performance, McLaren finished seventh and eighth, Alonso losing out on a close battle for sixth to Hülkenberg. Stoffel Vandoorne’s eighth-place finish came after a close bout with Marcus Ericsson, who earned his first points finish since the 2015 Italian Grand Prix.

Esteban Ocon took the last of the points at the expense of Carlos Sainz Jr but Force India counterpart Sergio Pérez struggled after spinning through contact with Brendon Hartley in the opening stages. Hartley finished 14th, behind Pérez in the end as he was given a 10-second pitstop penalty for his role in that scrap.

The Williams pair finished at the rear, Lance Stroll ahead of team-mate Sergey Sirotkin.

For full analysis of the Bahrain Grand Prix, stay tuned and sign up for the Mark Hughes newsletter to receive the in-depth Grand Prix report to your inbox soon.