So how come Tazio Nuvolari was so fast? 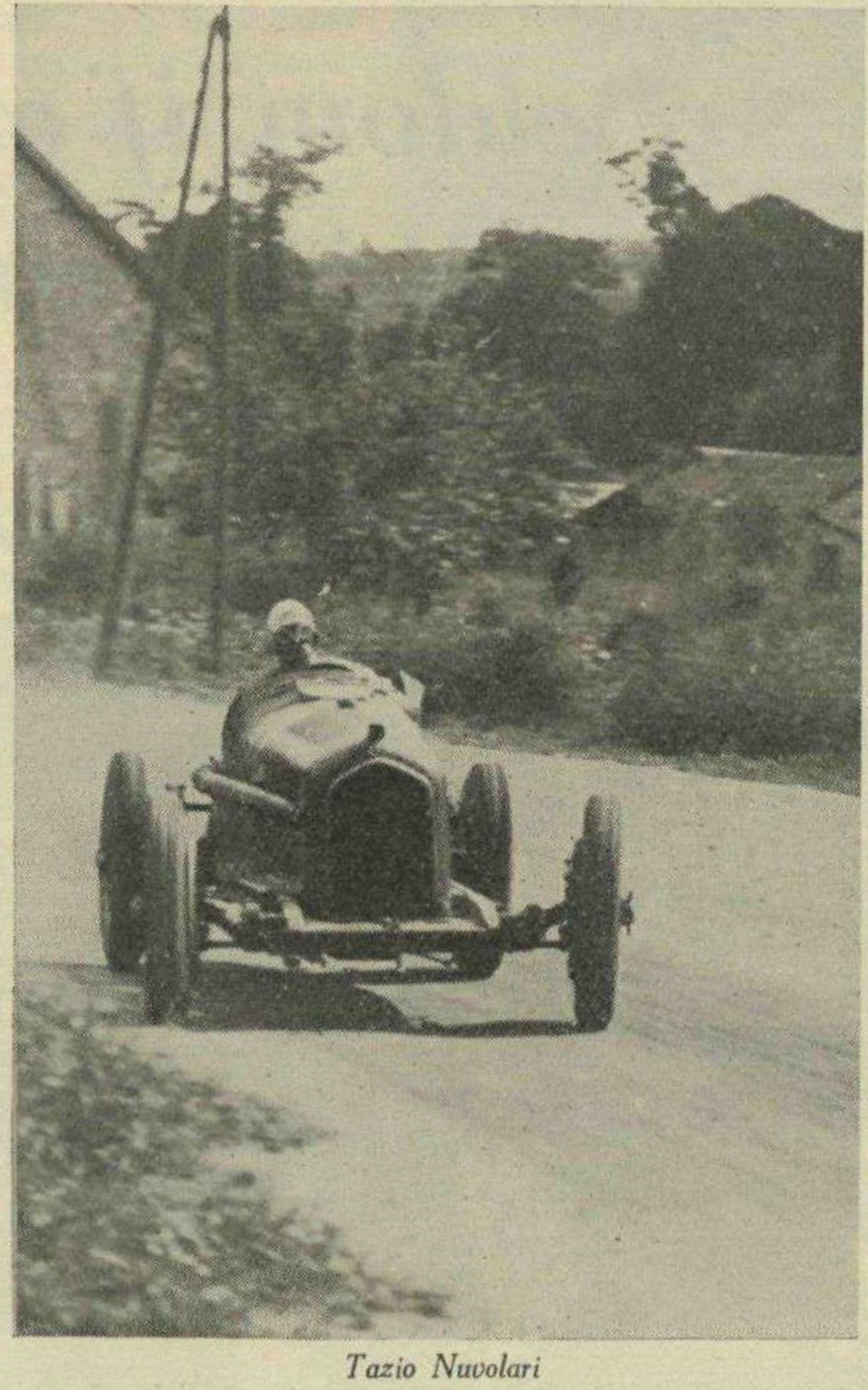 It depicts Nuvolari negotiating a fast right-hander between Gueux village and the sharp right at La Garenne that fed cars onto Route Nationale 31, this being the original layout of the Reims circuit.

Motor Sport’s reporter walked the entire 4.9-mile course – and enjoyed lunch and several restorative glasses of Champagne on a very hot day – during the five-hour race: We set out for La Garenne… and managed to regain the course at a fast curve where the cars were just changing up into top gear.

Leaning over the fence on the inside of the corner, we had a wonderful view as they flashed by within a few feet of us.

The cornering speed was simply terrific, the cars “snaking” round in a series of instantly corrected skids, the drivers wrenching the steering wheel rapidly from one lock to another.

Nuvolari seemed the most awe-inspiring of the lot, his nearside wheels occasionally lifting slightly in the middle of skids!

The moment the shutter clicked, however, he had his Alfa Romeo ‘Monoposto’ set in a perfect understeering drift.

The second appeared as part of the Coppa Acerbo report in the September 1935 edition.

Unlike the first, which is three-quarters head-on, this image is a rear shot, taken from a high vantage point.

Its caption reads: A typical “Nuvolari corner”… The car is forced round in a series of lightning skids… the front wheels are turned inwards, giving the car the appearance of going off the road.

It’s noticeable from the marks on said road that he is on a shallower, tighter line than what was clearly considered the norm. 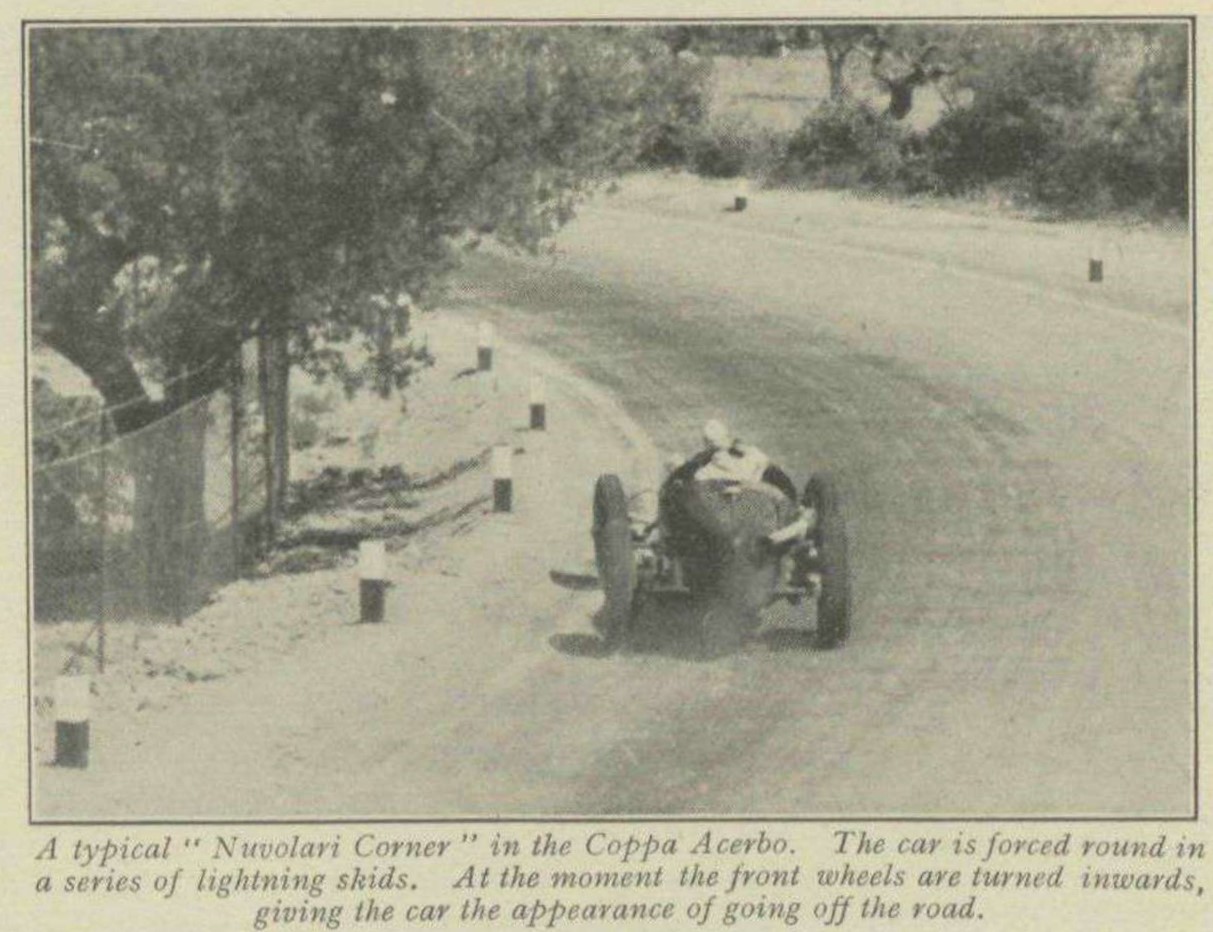 And once again he is executing an understeering drift.

Though they are snapshots from very different angles, the similarities are telling.

And they tally with an extract from Enzo Ferrari’s My Terrible Joys of 1963: I began to wonder what there was special in the style of that grim little man, whose performance was invariably the more brilliant the greater the number of bends, which he referred to as “resources”.

So one day in 1931, during practice for the Circuito delle Tre Provincie, I asked him to take me along with him.

At the first corner, I was certain that Tazio had taken it badly and that we were going to end up in the ditch; I braced myself for the shock.

Instead, we found ourselves at the beginning of the straight with the car pointing down it.

I looked at Nuvolari: his rugged face betrayed not the slightest emotion.

At the second bend, and again at the third, the same thing happened.

At the fourth or fifth, I began to understand how he managed it…

… I discovered his secret. Nuvolari went into the bend rather sooner than would have been suggested to me by my own driving instinct.

… he went into it in an unusual way, that is to say, suddenly pointing the nose of the car at the inner verge just where the bend started.

With the throttle wide open… he put the car into a controlled four-wheeled skid.

This way of negotiating curves was possible, at that time, mainly for two reasons: there was no independent suspension, as today, and the tyres were inflated to a much higher pressure.

Later, with the advent of independent suspension and medium-pressure tyres, even Nuvolari was no longer able to pull off his famous controlled skid in so sensational a manner.

Something of it nevertheless survived…

Which ‘our’ Coppa Acerbo photograph proves.

By that time his Monoposto had had its cart-sprung live front axle replaced by Dubonnet i.f.s. in a bid to keep technological pace with the more powerful ‘Silver Arrows’ of Auto Union and Mercedes-Benz.

There is a third photograph of note. Although it also appears in the September 1935 edition, it shows Nuvolari’s Alfa during the French GP at Montlhéry. 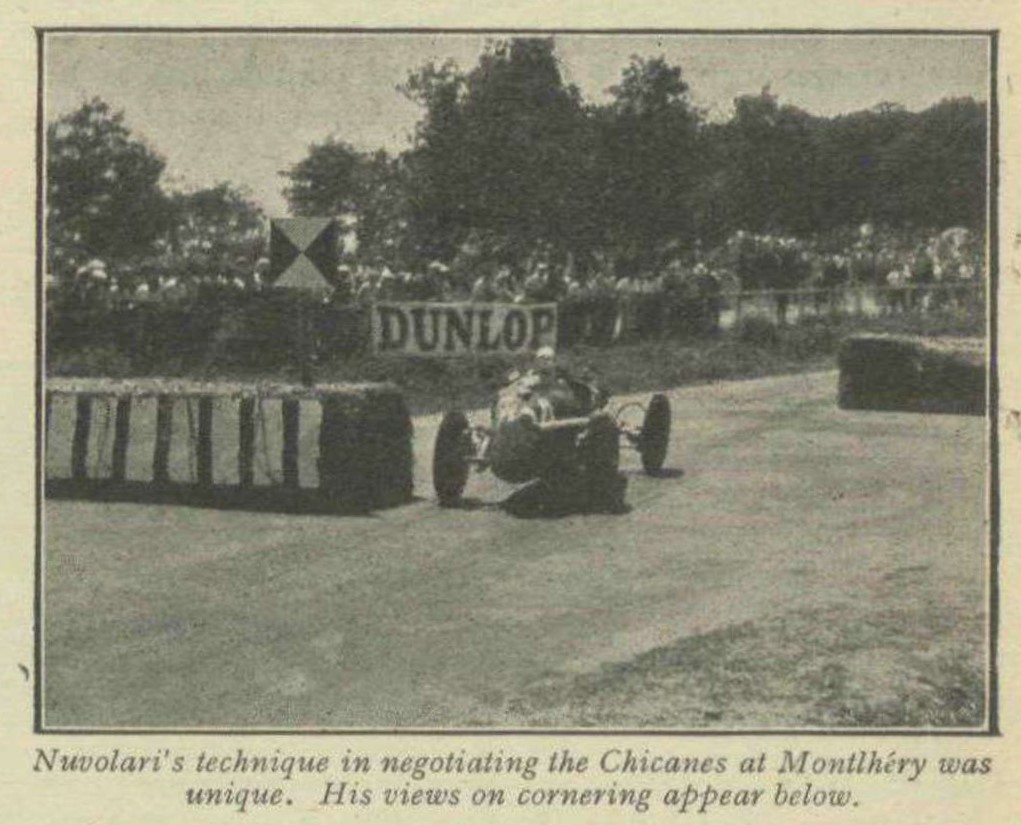 I watched the “Flying Mantovano” at the chicanes and here certainly he followed a style of his own.

He seemed to come up to the first straw bale with his car in a slide, checking it just in time to come out straight round the second one.

I rather doubt whether he learnt this trick from his motorcycling days.

Indeed he had not, as Nuvolari revealed to Adrian Conan-Doyle for his Nurburg Notes article in the same edition: One of our most interesting experiences was a little private lunch with Nuvolari. We found him a most pleasant and unaffected man, in sharp contrast to many lesser-known drivers.

He talked at considerable length [but unfortunately is not quoted at length!] about physical strength in relation to the modern Grand Prix car.

He says that when he first started motor racing, he found that, with his slight build, he had not the physical strength to “manhandle” a racing car on a bend or corner.

Therefore he decided to let the machine always enter a corner at a “natural” speed, in other words, let the natural smoothness and balance of the car control the man.

He has brought this act to perfection, a superb co-ordination of man and machine.

Ferrari concurred: Until the last his technique remained a supreme demonstration of skill carried to the very bounds of human achievement and the laws of balance and momentum.

Indeed, in 40 years of racing experience, I have seen it equalled by only one other driver, Stirling Moss.

The latter, having learned the advantages of inherent understeer in my underpowered Kieft 500 [of 1951], explained to author Doug Nye in the excellent My Cars, My Career how he gained an advantage over his rivals towards the end of his career: by taking a tighter line on the entry to the corners, than most others.

And by continuing to brake while steering up to the apex of a corner.

‘Predicting’ the understeering stance of Moss’s late-1950s Vanwalls and the unloaded waving wheels of his subsequent rear-engined Coopers, suggests that Nuvolari was 25 years ahead of the game.

For though their machinery and nuances of technique varied, as befitting the chronological gap, a shared ability to carry speed into a corner was what separated both men from the rest.

Nuvolari wasn’t the kind to look down.

Nor was Moss: At very high speeds, it’s very difficult to draw the line between bravery and stupidity. Very often they are virtually the same thing.

Perhaps one is a means to achieve the other.

Mix in the necessary counterbalances – a gymnast’s balance, a juggler’s co-ordination, a gunslinger’s eyesight and a bantamweight’s athleticism, strength and stamina – and you’re good to go.