A never-before-heard recording has emerged of the infamous clash between Formula 1 legend Ayrton Senna and then-precocious rookie Eddie Irvine after their on-track run-in at the 1993 Japanese Grand Prix.

Featured in the Formula 1 podcast series F1 On The Edge, Irvine chides Senna for being too slow, before the Brazilian replies “You’re not a racing driver – you’re a f*cking idiot!”.

The latest F1 podcast focuses on Eddie Irvine’s typically flamboyant debut for Jordan at Suzuka ’93, announcing himself both on and off the track. Sharing their memories of the incident are Irvine’s friend, the journalist Adam Cooper, his team boss Eddie Jordan and Jordan commercial director Ian Phillips amongst others.

Irvine immediately impressed on his F1 debut at Suzuka, using his Japanese F3000 experience to set eight fastest time in qualifying for a Jordan team which hadn’t scored points all year.

Cooper recorded Irvine’s post-qualifying thoughts, and this interview is also played in the podcast

“It doesn’t really affect me so much, it’s just nice for the people who’ve laid their balls on the line for me and my career,” Irvine says.

“I don’t really give a sh*t. I’m pleased where I am [on the grid, but] it’s no big deal really. My back’s hurting a bit more than it did yesterday. It’s going to be murder after the race.

“I’m just going to start and just cruise. I’m not going to try and push. I’ll push in the first two corners to try and get in the top 6 and then just do my normal – just back right off, people are going to overtake me, I’ll let me overtake me.”

Irvine did exactly as he predicted. Launching off the grid and using his preferred outside line at Turns 1 and 2, he rounded Michael Schumacher, Damon Hill and Derek Warwick to find himself fifth at the end of lap one.

“I was racing – if you were going fast enough, there’s no problem” Eddie Irvine

Later on in the race, Irvine was still squabbling with Hill for the final points-paying position, which is when the infamous incident developed. Senna lapped the Ulsterman, but Irvine decided the three-time champion wasn’t going fast enough.

Irvine unlapped himself heading into the 130R. After some tit for tat, Senna did eventually manage to clear the Jordan and pull away. However, to Senna’s astonishment at the end of the race, Irvine managed to unlap himself once more as they approached the chequered flag.

The Brazilian, who felt there was an unwritten rule about a lapped car not overtaking the leader on the track, was incandescent with rage post-race.

He vented his feelings in the post-race press conference: “I had lots of scary moments with backmarkers in the race, very unprofessional. If you’re leading the race and the guy makes life so difficult for you to overtake, I think measures should be taken against that.” 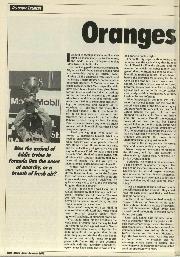 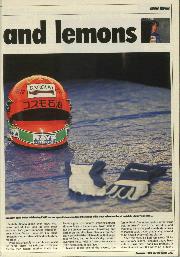 It's hard to recall just when an F1 novice burst so insouciantly on to the scene, and made the sort of impression that Eddie Irvine did in Suzuka. His qualifying…

Once he was finished letting it all out, Senna then apparently shared a drink with friend and former team-mate Gerhard Berger in the paddock. The alcohol imbibed, combined with teasing from the famously mischievous Berger, prompted Senna to go and seek out Irvine in the Jordan motor home.

“All of a sudden, Ayrton Senna appears at the door,” he remembers. “Eddie was on the massage table, probably with a beer in his hand. Ayrton was fired up and angry and was setting out to do silly.

“Eddie put his hand up and said ‘Here, are you looking for me?’

“We were in a state of total shock,” said Adam Cooper. “Ayrton was obviously looking. I turned my dictaphone and quickly turned it back on, wrapped in a timesheet or something like that and vaguely pointed it in the direction of where the two of them were standing.”

The podcast then plays the fascinating footage of the famous off-track coming together of Irvine and Senna.

“I was racing,” says Irvine. “If you were going fast enough, there’s no problem.”

“You were racing?” replies Senna. “You took a very big risk to put me out of the race, is that what you want?”

“I didn’t put you in any danger. A miss is as good as a mile,” Irvine cheekily replies.

“You’re not a racing driver – you’re a f*cking idiot,” is how Senna responds, before continuing, “How come I overtook you on wets?”

“I don’t remember that,” says Irvine.

“Exactly, because you’re not competent enough,” the irascible Senna replies.

“Oh well, is that what you think? Oh, then I’ll watch out for you!” Irvine tells him.

Senna then informs Irvine that the FIA will be watching the young Jordan driver, to which Irvine responds. “That’s good – I’ll see you out there.”

Phillips recalled what happened next.

“Ayrton just launched himself across the room,” he says. “And started hitting Eddie!”

Once the scuffle, quickly died down, Irvine then delivered a characteristic quip: “Insurance claim!”

“None of us could quite believe what had just happened. I then held up my hand and said ‘I got that on my tape recorder!’ And everybody looked at me with these big smiles.”

Ever the quick-thinking journalist, Cooper then immediately asked Irvine to record his thoughts on the incident on his dictaphone.

“What happened is, he couldn’t catch me,” says Irvine. “Then I went wide and let him overtake me and followed him for a few laps, but he was so bloody slow, I had to get at Hill so I had to overtake him.”

When Cooper asks if he was surprised Senna physically attacked him, Irvine says: “I was, I couldn’t bloody believe it. It didn’t surprise me [that the Brazilian verbally scolded him], he was obviously rather annoyed.

“[He hit me] on the temple, and then pushed me off the table. I have no respect for the guy at all, even before this race, I had no respect for him.”

Irvine famously used a variation on Senna’s helmet design as his own, indicating he may have been a hero for the Ulsterman, but Irvine is emphatic when Cooper queries this.

“That was before I wised up,” Irvine says. “I thought he was the best driver by a long, long way. I don’t really think that’s the case now, I think Schumacher’s at least his equal. I think Häkkinen is going to give him a very hard time.”

The criticism doesn’t end there.

“I think the guy’s got a serious problem, he thinks he’s God’s gift to the racing driver,” says Irvine. “It’s a game of marbles, but wants to keep all the marbles.”

The coming together made big news in the motorsport press and beyond, and Eddie Jordan remembered Irvine’s typical take on the situation when they next met up.

“He said, ‘Look Jordan, at the publicity I’ve got for you!'” Jordan said. “He would never say he was sorry. He said ‘I’ve made you a goddamn’ fortune!”

Irvine’s points-scoring and headline-grabbing debut secured his future with Jordan for the next season, and he eventually went on to drive for Ferrari, almost pipping Häkkinen to the F1 crown in ’99.

Often seen as one of the ultimate F1 playboys, Suzuka ’93 was another example of Irvine being famous for not just what he did, but how he did it.

The Senna vs the Rookie episode of the Formula 1 podcast series F1 On The Edge can be listened to here.