The returning Michael Schumacher in rear-gunner mode for Eddie Irvine, bargeboards and an irked Mika Häkkinen 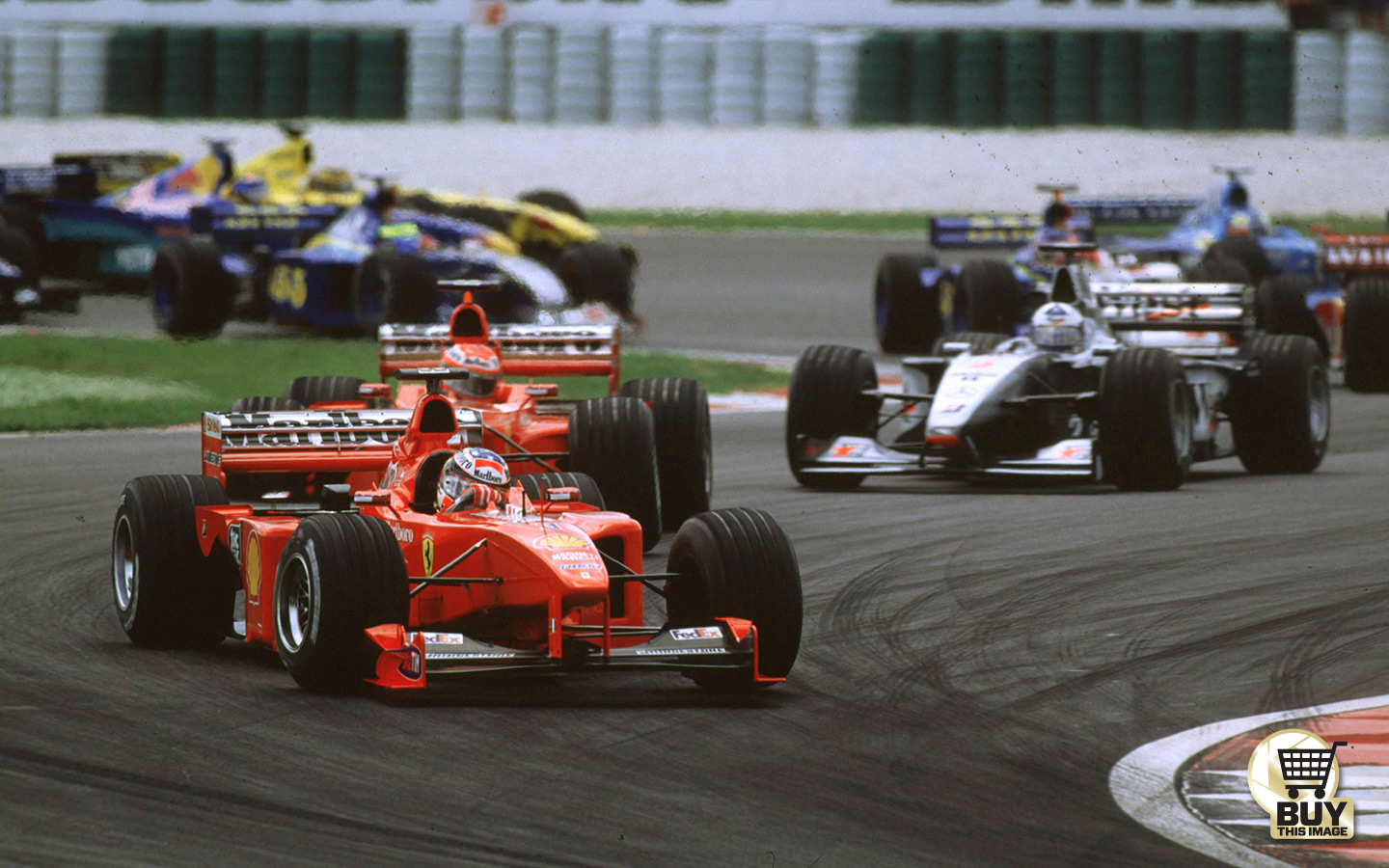 Ferrari’s Eddie Irvine had good reason to joke and smile in the immediate aftermath of the 1999 Malaysian Grand Prix, the first held at the new Sepang facility. His victory – brilliantly orchestrated by his returning team-mate – meant that he held a four-point lead in the world championship with one race remaining.

“Michael did all the hard work for me,” admitted Eddie.

But chances are that Schumacher would rather have been playing football – broken leg or no.

The German had crashed on the first lap at Silverstone in July attempting to immediately repass Irvine, who had ostentatiously swept around the outside of him at Copse.

Buried beneath a pile of tyres, his title hope leaked away, as had the fluid to his rear brakes.

Recuperating in the comfort of his Swiss villa he then had to watch with increasing discomfort as Irvine – with help from outstanding stand-in team-mate Mika Salo – constructed an unlikely challenge to reigning champion Mika Häkkinen. 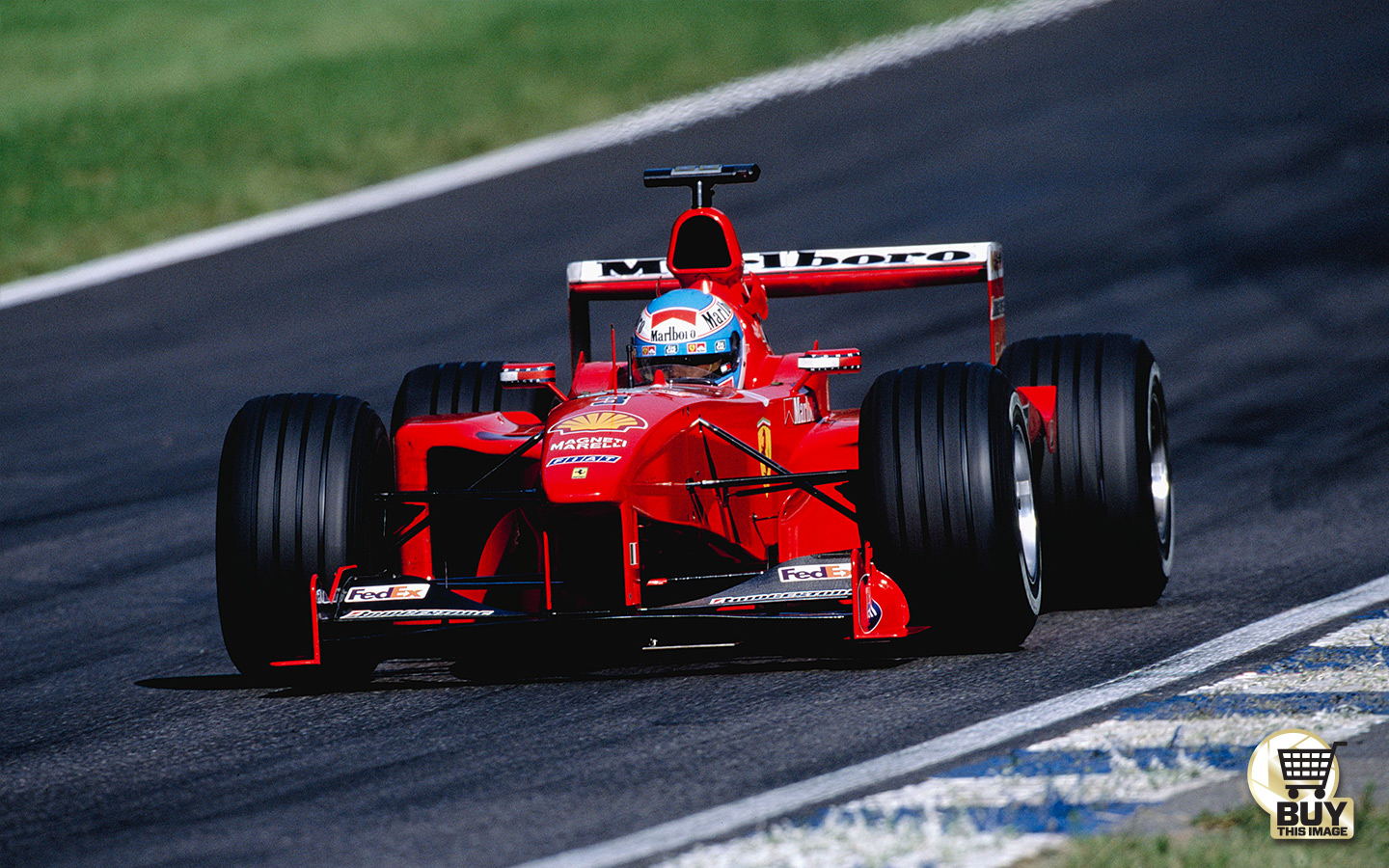 Mika Salo at Hockenheim, subbing for the recovering Michael Schumacher

Indeed the latter and his McLaren team-mate David Coulthard seemed bent on self-destruction. Twice they clashed, at the A1-Ring and Spa, while Mika alone spun away victory at Monza – and crouched behind a bush to reflect and have a little cry.

Was the journeyman Ulsterman about to steal Schumacher’s thunder and take the world champion’s number one to the ‘green Ferraris’ – ha! – of Jaguar in 2000?

It was almost too much to bear.

Schumacher lapped quickly when he tested at Monza but insisted that his right leg – the double fracture below the knee now pinned – was too sore for him to race.

It sounded a bit limp.

And when Ferrari President Luca di Montezemolo later called to discover how his star’s recovery was progressing, he was told, so the story goes, by Schumacher’s daughter Gina-Maria that “Daddy is playing football”.

True or not, Schumacher got his arse on a plane to Kuala Lumpur and in stifling conditions that left Häkkinen gasping gave a demonstration of superiority superior to all bar a few of his eventual 91 Grand Prix wins.

On pole by almost a second from Irvine, he romped into a big lead to make his point before allowing Eddie past on the fourth lap.

Thereafter he gave just enough space to Coulthard – DC was always impressively keen to pass and capable of overtaking Michael – before concentrating on his day’s main objective: bottling Häkkinen. 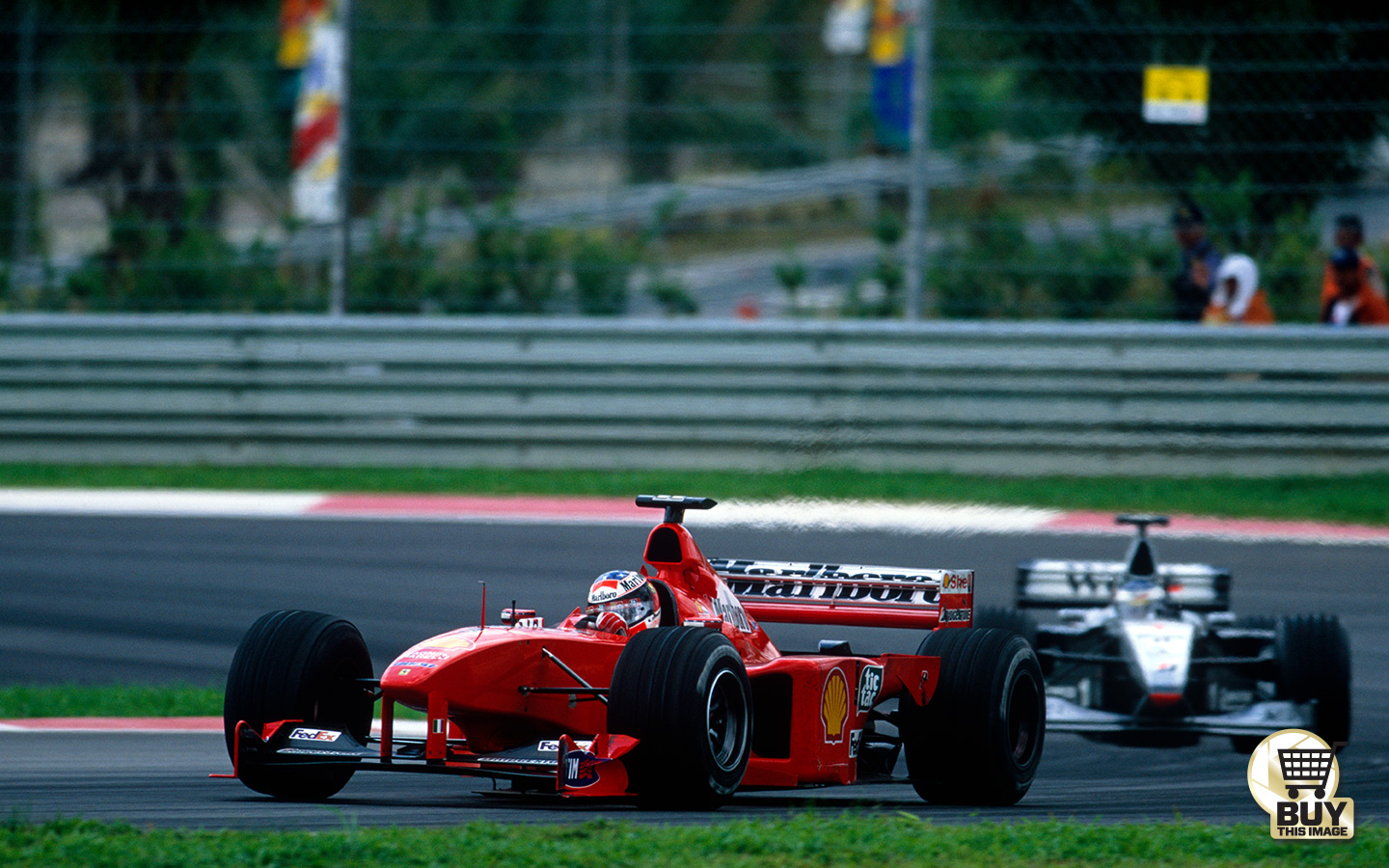 Schumacher’s delaying tactic allowed Irvine the margin necessary to resume his lead – DC’s challenge had fallen foul of a fuel pump failure – after the first stops played out. But only after Schumacher, who set the race’s fastest lap – by three-tenths – the moment his team-mate peeled into the pits, had made his only scheduled stop, at precisely mid-distance.

Schumacher’s burst meant that once again he was able to infuriate Häkkinen while Irvine made good his escape prior to a second stop. And although the Finn’s running long caused palpitations in the Ferrari pit, his predicted splash-and-dash allowed the red cars to again calmly reshuffle their 1-2 order, this time four laps from the finish.

Despite heavier fuel loads, Schumacher had made light of the task.

Of course, it wouldn’t be classic Schuey without controversy.

Häkkinen played an impressively straight bat in the post-race post conferences but fumed in private about the German’s “inconsistent driving patterns”.

But then, two hours after the chequered flag, the F399’s barge boards were deemed fractionally below board and Ferrari was disqualified.

One is left to wonder how ‘disappointed’ Schumacher was by this news – and how ‘delighted’ he was by the success of Ferrari’s appeal the following Saturday.

Conflicted is my best guess. 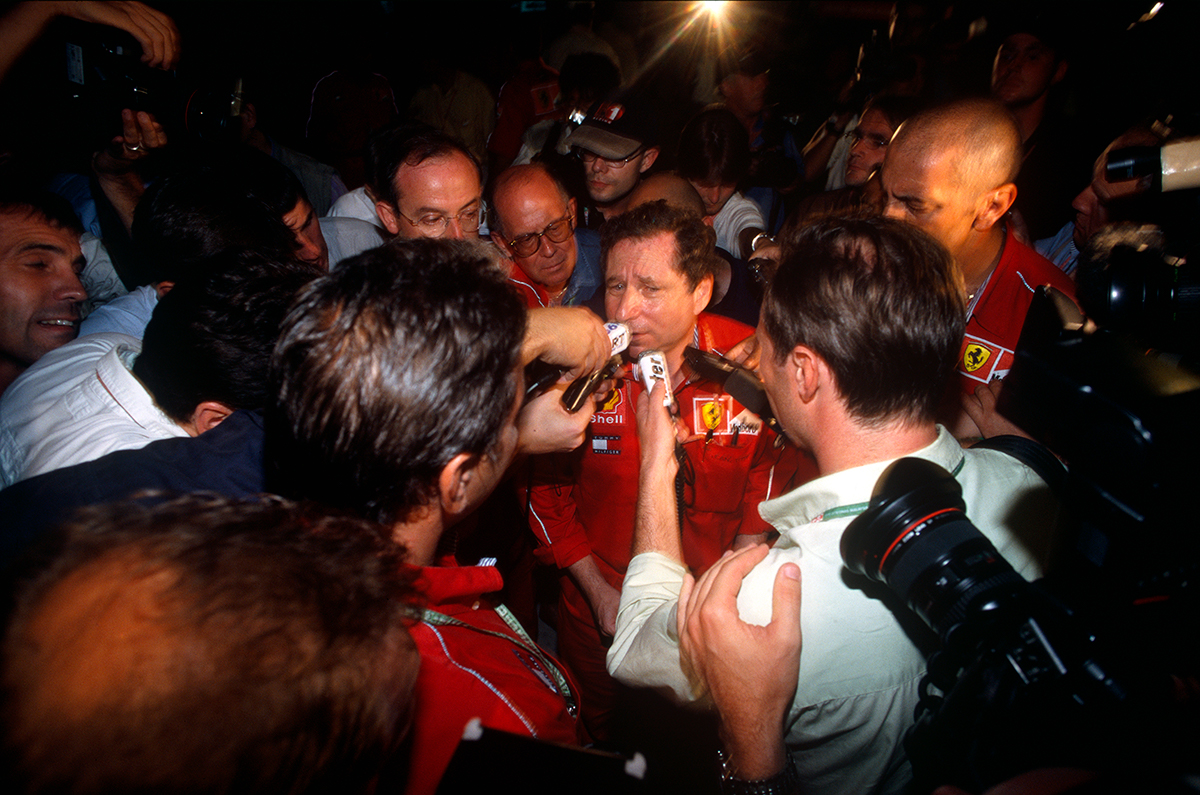 Irvine was elated by the reprieve, as was di Montezemolo. Others at Scuderia Ferrari, however, were surprisingly muted, as was Schumacher’s performance at the Suzuka finale.

Though he qualified again on pole, he was no match for Häkkinen on this occasion. A win for the Finn would guarantee his second title no matter what Irvine’s result in Japan – and this time there was no sign of any Ferrari switcheroo.

Third-placed Irvine, always candid, admitted that simply he lacked the pace to keep up.

By finishing half a minute behind Michael he had helped Ferrari win its first constructors’ title since 1983 but left the door open for Schumacher to become its first champion driver since Jody Scheckter in 1979.

The greatest period of domination in F1’s history arguably began in Malaysia 17 years ago.

And it ended there, too, in 2005, when Fernando Alonso scored the first of a hat trick of wins for Renault.

This weekend, in contrast, we will continue to find ourselves somewhere between the two.

Unless, that is, Ferrari breaks a leg. 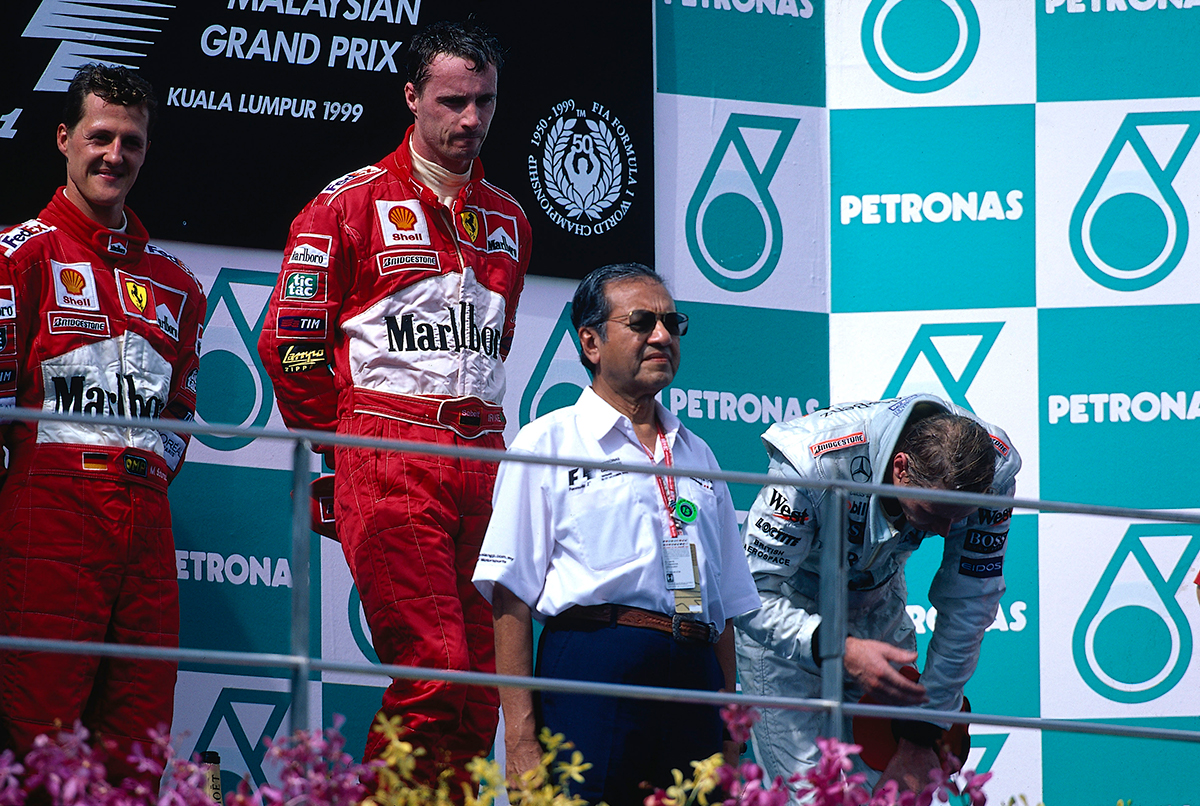