McLaren is a Formula 1 team with a history of fielding household names, but without Alonso in 2019, its decline could become more apparent than ever 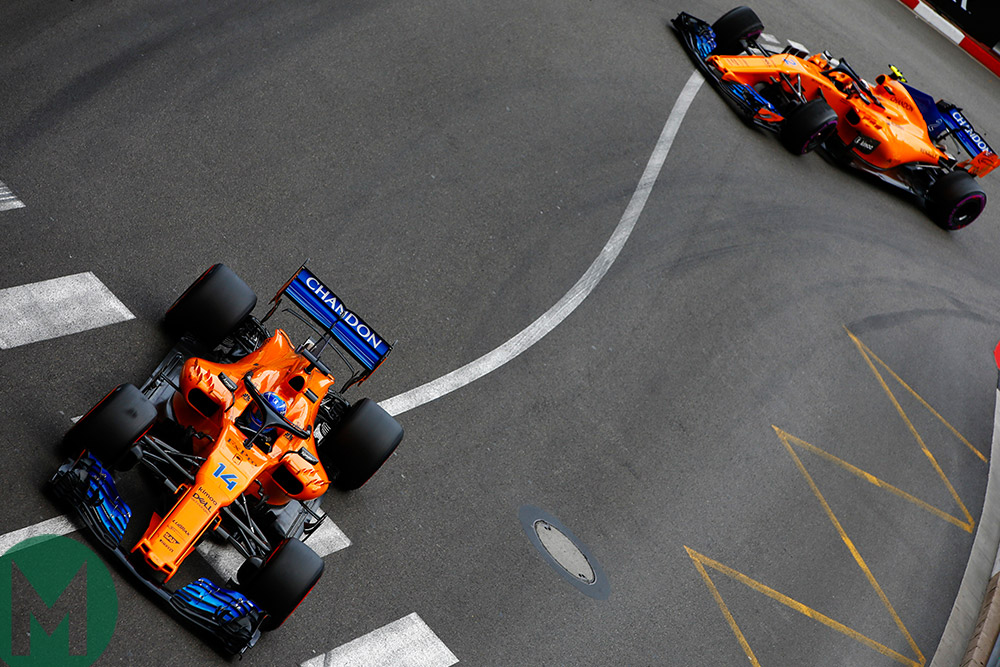 But let’s ponder the facts.

The team made its Formula 1 debut at Monaco in 1966, with company founder Bruce McLaren – already three times victorious in world championship Grands Prix – at the helm.

Since then, it has only twice started a Grand Prix campaign without a proven GP winner in its line-up: 1994, when Martin Brundle (Jaguar’s title winner in the 1988 World Sports Car Championship) partnered Mika Häkkinen (who looked quite handy); and 1995 (when Häkkinen was joined by Mark Blundell, who subbed for Nigel Mansell until the MP4/10 chassis could be widened to accommodate the latter).

Denny Hulme joined McLaren in 1968, since when it has only twice started a season without a past, present or future world champion in its armoury: 1979, when it ran John Watson and Patrick Tambay (both eventually multiple GP winners); and 1981, when Andrea de Cesaris joined Watson, did a reasonable amount of damage and remains the last Italian to have been recruited by the team.

Throughout most of its history, during various management phases, McLaren has attracted (or helped to create) household names: Fittipaldi, Hunt, Prost, Lauda, Rosberg, Senna, Häkkinen, Hamilton, Alonso and Button, to name but 10.

In 2019, however, it will run one driver with a famous father alongside… who knows? Will Stoffel Vandoorne be retained? The Belgian has an impeccable record in the junior ranks – champion in F4, the Formula Renault Eurocup and GP2 – but has for the past 18 months existed in Alonso’s shadow. The Spaniard remains exceptional but by now Vandoorne really ought to be at least matching him from time to time – it took Lewis Hamilton only a couple of races to do just that in 2007, admittedly with the benefit of boundless testing that emerging talents are now denied.

Or might it select reserve driver Lando Norris? The 18-year-old former karting world champion has taken titles at most levels since switching to cars – MSA Formula (now F4), Formula Renault and FIA F3 – and is a contender to do likewise in F2, though he has won only one race to date. Closest rival George Russell has taken four victories, leads Norris by 12 points and might be rather more distant but for several car failures. It would be no great surprise to see both graduate sooner rather than later to F1 and emerge eventually as race winners or, potentially, champions.

But for now, McLaren is likely to enter 2019 with an experienced campaigner that has spent his F1 career in the midfield (best result: fourth in the 2017 Singapore GP) and a team-mate who has either a) underperformed for 18 months or b) has yet to complete a competitive kilometre in a Grand Prix car – and, as previously mentioned, won’t have much opportunity to test.

Not quite Prost/Senna or Alonso/Hamilton, is it?

Sainz is an interesting case study. Backed by Red Bull since he made his car racing debut (Formula BMW, 2010), he has been given a number of second chances – particularly when you consider driver development director Helmut Marko’s traditionally brutal treatment of youngsters who don’t deliver.

Sainz won the Formula Renault NEC title in 2011 but showed patchy F3 form the following season (sixth in British F3, ninth in Europe). Switching to GP3 in 2013, he took one pole but failed to convert it and ended the year 10th overall, with fewer than half the points of team-mate and fellow Red Bull fledgling Daniel Kvyat, who took the championship.

Compare Sainz’s record with that of António Félix da Costa. Adopted by Red Bull in 2012, he finished second in that season’s GP3 series (denied a title shot by a car failure in the penultimate race), finished fourth in the Formula Renault 3.5 standings (he’d missed the opening five races, but thereafter scored four wins – more than any other driver managed over a full season) and then popped across to south-east Asia to win the Macau GP. Had there been a Toro Rosso vacancy at the season’s end he’d have been a shoo-in to step up, but there wasn’t so he didn’t. One year on he finished third in FR3.5 and was thereafter shuffled down the cul-de-sac signposted ‘DTM’. Kvyat was at that stage promoted to F1, while Sainz – despite his poor season – retained Red Bull backing and was moved into FR3.5, where he emerged as champion in 2014. More importantly, he also impressed Red Bull during a mid-season F1 test at Silverstone. As Marko later told Mark Hughes (Motor Sport, July 2017): “The first time we put him in an F1 car he was quicker than Vettel. That test was the only reason I put him in the Toro Rosso…”

Sainz has since compared reasonably well with his regular F1 team-mates – Max Verstappen, Kvyat, Nico Hülkenberg – but hasn’t demolished any of them. When Vettel decided to leave the fold, Kvyat was initially promoted… but Verstappen, not part of the Red Bull family until he reached F1, was subsequently shuffled ahead of all other juniors.

This year Sainz sought betterment with Renault, albeit on loan from his long-time backer, but has been gently outpaced in qualifying (by about three hundredths, on average) and has scored 22 fewer points after 12 races. When Daniel Ricciardo surprised everybody – including Renault – by accepting its offer for 2019, there was no longer a place for Sainz. Indeed the team had expected to recruit Esteban Ocon, so Sainz had been at best third choice. And, as is now clear, Red Bull – which has all the relevant numbers – was in no rush to bring him back to the fold.

It’s unconfirmed, but the indications are that Red Bull will promote Pierre Gasly… a driver who achieved a better result with Honda in two races than McLaren had managed in three seasons.