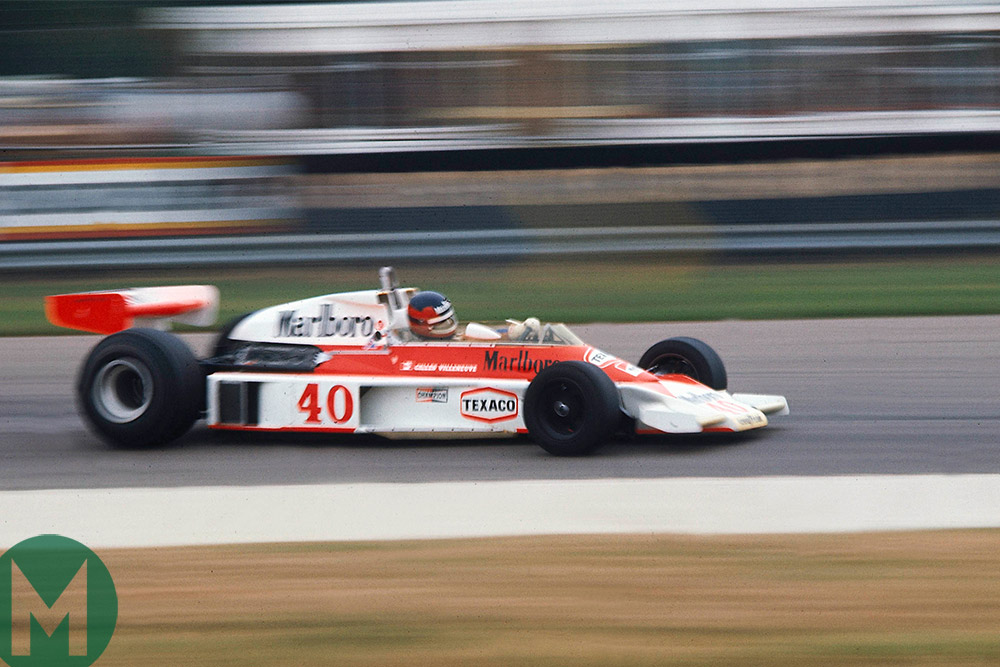 Silverstone, 1977. McLaren’s two works M26s are separated on the grid by an older M23, run by a satellite factory operation for a driver whose previous Formula 1 experience extends to a bit of pre-race testing.

But for a faulty temperature gauge, Gilles Villeneuve would, in all likelihood, have finished fourth. Seldom the most easily impressed of observers, Denis Jenkinson liked what he was watching. In the August 1977 edition of Motor Sport, he wrote: “In seventh Villeneuve had not really lost contact with the leading group, which was very impressive for a Formula 1 debut, and he was still leading [team-mate Jochen] Mass. However, his water temperature gauge had gone berserk and, as he had made a slight excursion onto the grass at one point, he thought he might have damaged something in the water system. At the end of 10 laps he handed Mass seventh place as he went into the pits. While his mechanics came to the conclusion that the gauge had broken, the young Canadian had undone his seat belts and climbed out, thinking his race was over. By the time he was strapped back in and sent on his way he had lost two laps.”

He rejoined just ahead of a tussle between Jody Scheckter, Gunnar Nilsson and Mario Andretti. DSJ again: “Rather than ignore his followers and make them find their way by one at a time, and spoil the rhythm of their three-cornered battle as some drivers do, this very cool newcomer moved over, let all three go by, tucked in behind them and resumed the same pace, sitting comfortably with the three works stars.”

Jenks was a little less effusive three years later, when Nigel Mansell made his Grand Prix debut with Lotus in Austria – he scarcely mentioned him! – but while the English rookie’s performance was less obviously impressive than Villeneuve’s had been, it made its mark on Lotus boss Colin Chapman. Mansell had spent much of the race with his buttocks toasting gently in a pool of fuel that had leaked into the cockpit, but refused to give up until a blown Cosworth DFV sidelined him with 13 laps to go.

Science is powerless to explain why McLaren failed to commit Villeneuve to a long-term contract when the chequered flag fell at Silverstone, an oversight upon which Ferrari later capitalised, but Chapman gave Mansell further opportunities before awarding him a full-time race seat in ’81. And he did so, as McLaren had with Villeneuve, via the simple mechanism of entering a third car – a practice that fizzled out after Renault ran one for François Hesnault in the 1985 German GP. Since then, barring the occasional case of force majeure forcing a team to withdraw an entry, two-car uniformity has prevailed.

Which is, frankly, a bit dull.

It was Toto Wolff who recently suggested the possibility of third cars being reintroduced, triggering a wave of indignation from rival team bosses (some of whom seem to regard it as a proposal from the pen of Satan, rather than a commonly practised ancient custom). I can understand Red Bull not wanting them, as it already has four seats and appears to be struggling to fill a couple of those without dipping into its pool of previous cast-offs, but there is no need for extra entries to be mandatory – nor even for them to appear at every race.

I’m with Wolff on this one.

I realise his suggestion is sprinkled with self-interest, for in Esteban Ocon and George Russell he has a couple of juniors who are established in/ready for F1 yet have no immediately obvious outlet for their talents in 2019, but something has to be done to assist youngsters’ career progress. Especially in an era when testing opportunities are so limited, there are but 20 slots on the grid (not quite like Silverstone ’77, where Villeneuve was one of 40 entries – although four admittedly failed to show) and somebody thinks it a bright idea to prolong Kimi Räikkönen’s career at Sauber.

As a media company, F1 owner Liberty can surely see the commercial benefits of Alexander Rossi and Josef Newgarden being allocated third cars (and a bit of testing) for Austin, or even Miami if ever it should happen. Ditto Artem Markelov racing at Sochi, or Sérgio Sette Câmara at Interlagos. Yes, the licensing system might require a couple of tweaks – but that’s surely a minor consideration, so long as common sense prevails.

Wild-card entries work well in MotoGP, and major tennis tournaments. In terms of the show, where are the downsides?