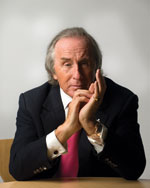 Of all the months we should ask Sir Jackie Stewart to be guest editor, it was fitting that it was this one. Three World Championships and nearly a one-in-three win rate from his 99 Grand Prix starts is impressive enough, but it is his pioneering work in the name of safety that makes Sir Jackie equally as proud of his career in motor sport. And safety was a subject on all our minds as we put the finishing touches to the December issue of the magazine – complete with the odd touch of Stewart tartan here and there.

Most of our work was complete when news of Dan Wheldon’s death filtered through from Las Vegas. Jackie had already penned his editorial for the issue in which he’d been keen to use his opportunity in the Motor Sport chair to say something with meaning and resonance. When he joined us in the office for an afternoon during September, we’d discussed what he wanted to say and as usual, he made some interesting points about modern racing drivers – some of which you might already have heard on the podcast we recorded that afternoon.

Jackie had just returned from Singapore at the time, where he’d witnessed another difficult weekend for Lewis Hamilton, and so we discussed the approach of Formula 1 drivers to one of his favourite subjects: ‘mind management’. As you can read further in the issue, our guest editor believes motor racing could learn a few lessons from other sports such as golf, where players benefit from the experience of personal coaches to help them perform.

“Racing drivers seem to be so clever that they don’t need that kind of help,” says Sir Jackie. “They are totally wrong. There is no point in saying, ‘I’m alone in my car – how can anyone else influence the way I drive?’. That is presumptuous and simply wrong. Drivers employ managers to assist them in their commercial dealings, so why should they not, from time to time, be in need of counsel with regard to their performance in the cockpit.”

As he says, the attitude that drivers somehow don’t need this sort of help is outdated, and it was a point I heard Red Bull team principal Christian Horner touch upon when talking to a bunch of young drivers at the BRDC club house recently. As professional sportsman, why shouldn’t racing drivers employ full-time coaches? It’s not exactly a new idea – Rob Wilson is one respected driver coach that springs to mind – but even the best F1 aces would benefit from a confidante who could give them another perspective on what is, after all, the most important part of their jobs.

Within his editorial, Sir Jackie writes about how motor racing can never be totally safe, and that rather than wrap the sport in cotton wool his motivation had always been to simply eliminate all “unnecessary risk” from the sport he loves. Those words took on greater relevance after Las Vegas, in the wake of an Indycar race that stepped beyond the boundaries of acceptable safety standards in 2011.

Since we closed for press, poor Marco Simoncelli has also lost his life, live on television, in a similarly horrible MotoGP accident. From both deaths, lessons will be learned as they always are, but the true impact on the sport is still only beginning to sink in.

As Sir Jackie said to us, the impact of death in motor sport is somehow greater today than it used to be in the years when it was all too common. Not that life had any less meaning in past decades, but its loss was so regular in racing it was almost accepted by those who took part in, and organised, events. That attitude changed during and directly after Stewart’s career in the cockpit, and the result is that today modern drivers and riders don’t often have to deal with death. Thus when it happens it hits them – and us – all the harder.

Elsewhere in the issue, Sir Jackie deals with the happier aspects of our sport: the friendships he built during his career in racing and the relationships that most influenced his sporting life. The details of his career are so well documented and known, we thought long and hard about what Sir Jackie could offer as guest editor, and between us we thought his perspective on those around him rather than repeating his own achievements would be much more worthwhile.

Editor-in-chief Nigel Roebuck talks to Sir Jackie about Ken Tyrrell, the man with whom he built such an effective partnership that went far beyond the limits of team boss and driver. Sir Jackie also has some fun with a bit of fantasy inspired by a bit of ‘Desert Island Discs’ thinking: if he could choose any guests to invite to a dinner party, friends or heroes, alive or dead, who would he sit around a table? His choice reflects Sir Jackie’s wide experience of life and is far from limited to those he most admired in motor racing, and he had fun putting his list together. Jim Clark sitting between Peter Ustinov and David Niven… just imagine what they’d talk about.

We also took the opportunity to ask Sir Jackie for his thoughts on the best drivers of 2011 (no great surprises on who he picked for this one) and also those he thinks make up the top five drivers in history. Like most of us, JYS doesn’t believe in ranking drivers from different eras – it’s impossible to compare like for like – but his shortlist is significant for whom it doesn’t include as much as who is on it. Let’s just say his choice isn’t influenced by mere statistics and iconic reputations.

Elsewhere in the issue, Simon Taylor travels to Austria to meet Hans Stuck for lunch. We knew the 60-year-old would be full of stories from his long career in F1, saloon and sports car racing – and so it proved.

We also take a closer look at the revolutionary Delta Wing racer that used to be an Indycar and is now a Le Mans sports prototype… and take an emotional road trip to remember Richard Burns, who became England’s first and only World Rally Champion 10 years ago this month.

At times, it was a challenge putting this issue together, but for varying reasons it’s one none of us will easily forget. I hope you enjoy reading it.