When Sir Stirling Moss drove on the track, he was there to race, not to eke out championship points. On Moss’ 90th birthday, Simon Arron looks at the thrilling career of a true racer 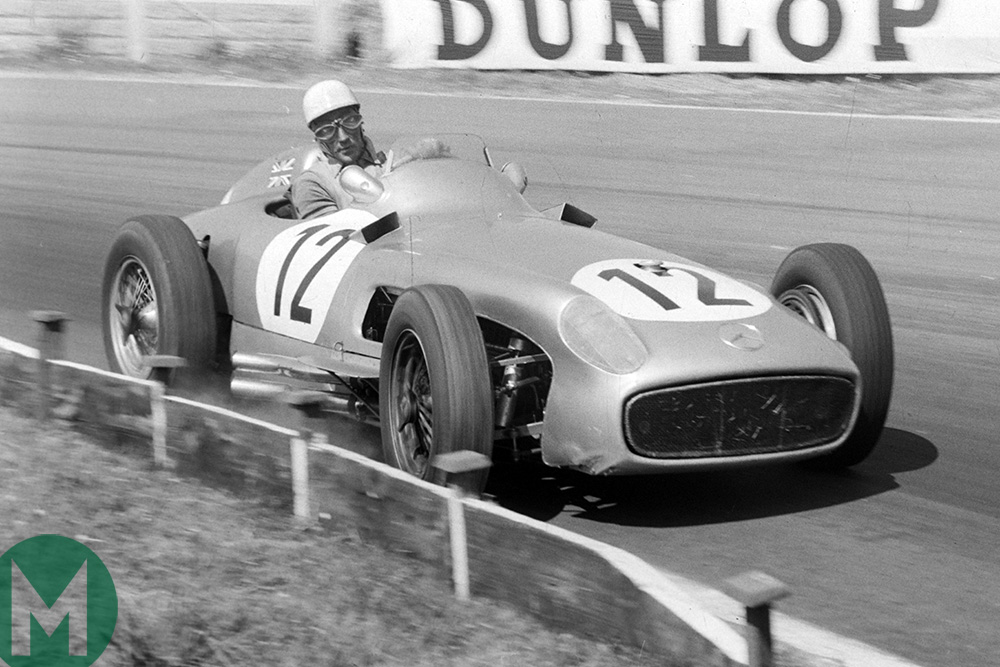 He has been invisible to the wider world these past few years and officially retired from public life more than 18 months ago, in the slipstream of a serious illness, but a lower profile cannot erase Sir Stirling Moss from the public conscience.

That much was clear during the 22nd Goodwood Revival Meeting, when the Duke of Richmond stepped forward to give a commemorative speech a few days before Moss’s 90th birthday. Quite a landmark, that, for a driver whose competitive peak coincided with one of motor racing’s most dangerous periods, a time when average lap speeds escalated while safety precautions stood still. Moss knew all about that: witness the serious leg injuries he suffered during practice for the 1960 Belgian Grand Prix, a race in which compatriots Chris Bristow and Alan Stacey both died, or the career-ending aftermath of his accident during the 1962 Glover Trophy at Goodwood.

Recalling that day some years later, he said, “I remember driving away from my hotel and I’d met a cute South African girl the previous evening, but beyond that… nothing. The next thing I remember is coming to in hospital, a month later, and seeing flowers everywhere. I said, ‘Blimey, they must have thought I was going to die.’ I didn’t appreciate quite how close to the mark that was.”

A year later Moss returned to the scene of his accident to test a Lotus 19 sports-racer in greasy conditions. His lap times were decent, but driving no longer felt as instinctive as once it had and he opted to retire from the sport he’d graced – a choice he later conceded to have been “premature”.

His decision robbed the sport of what could have been a fascinating generational tussle – the established maestro against the incoming genius of such drivers as Clark and Surtees – and ensured that he never would win the world title to which he’d often come close. 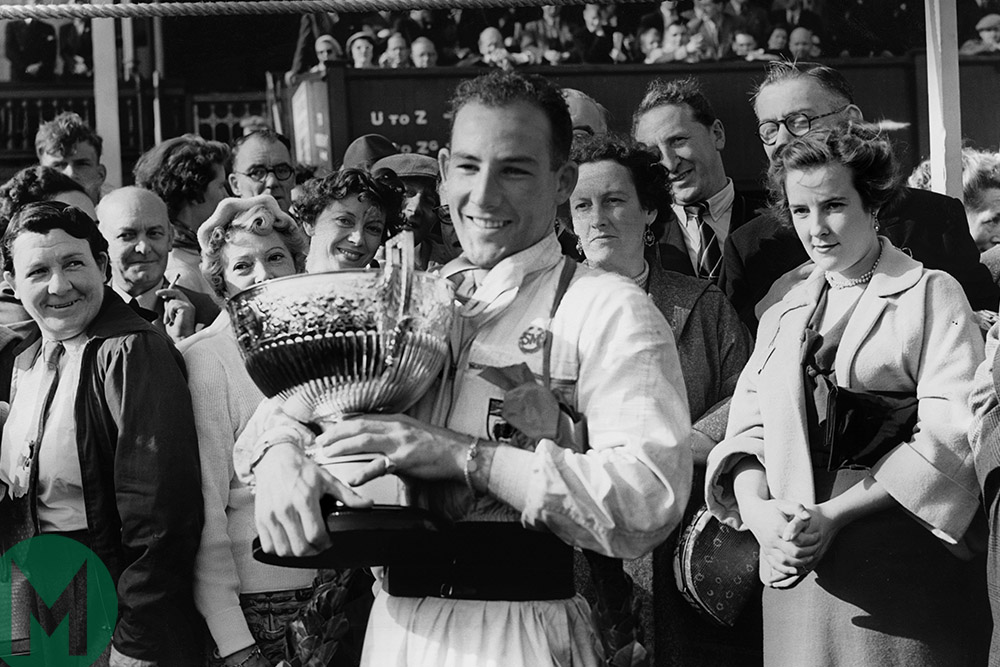 Moss has lifted more than 200 trophies during his career Photo: Motorsport Images

Between the ages of 17 and 32 Moss contested 585 races, rallies, sprints, hillclimbs and trials, winning more than 200 of them – including 16 world championship grands prix… enough to put him second in the title race for four seasons in succession (1955-1958), and third in the three that followed.

But for his own unswerving sense of fair play, he could have pipped Mike Hawthorn to become Britain’s first world champion in 1958. Moss won four races to his rival’s one, but the latter benefited from greater reliability and consistency. The pivotal moment came in the Portuguese GP, from which Hawthorn was initially stripped of second place for receiving a push-start after slithering off the track. Moss was among those who came to his defence.

“My feelings about the incident have never changed,” he said in 2009. “Mike did nothing wrong. He got stuck in an escape road and received a push when he wasn’t actually on the circuit. I didn’t see how that warranted exclusion. It’s irrelevant that I didn’t subsequently take the title. The fact I was runner-up four times gives me a certain kind of exclusivity – and I know for sure that I was quicker than some of those who did win it. Driving percentage races, just to secure a finish and some points, didn’t really interest me. Some people can do that and we have seen it many times. My philosophy was different – I had absolutely the wrong mindset for winning titles, but I’m a racer.”

He has always cited his 1955 Mille Miglia victory – with Motor Sport’s continental correspondent Denis Jenkinson alongside as what Moss called his “guide dog”, reading pace notes – as his greatest, averaging just shy of 100mph for 10hrs 7min 48sec on public roads.

Nominating his finest F1 moment is trickier, such is the wealth of choice. His maiden world championship success, beating Mercedes team-mate Fangio at Aintree in 1955? Scoring Cooper’s landmark GP victory – the first for a car with its engine behind the driver – at Buenos Aires in 1958, when he conned the quicker Ferrari drivers into easing their pace in the belief that he was going to make a tyre stop? 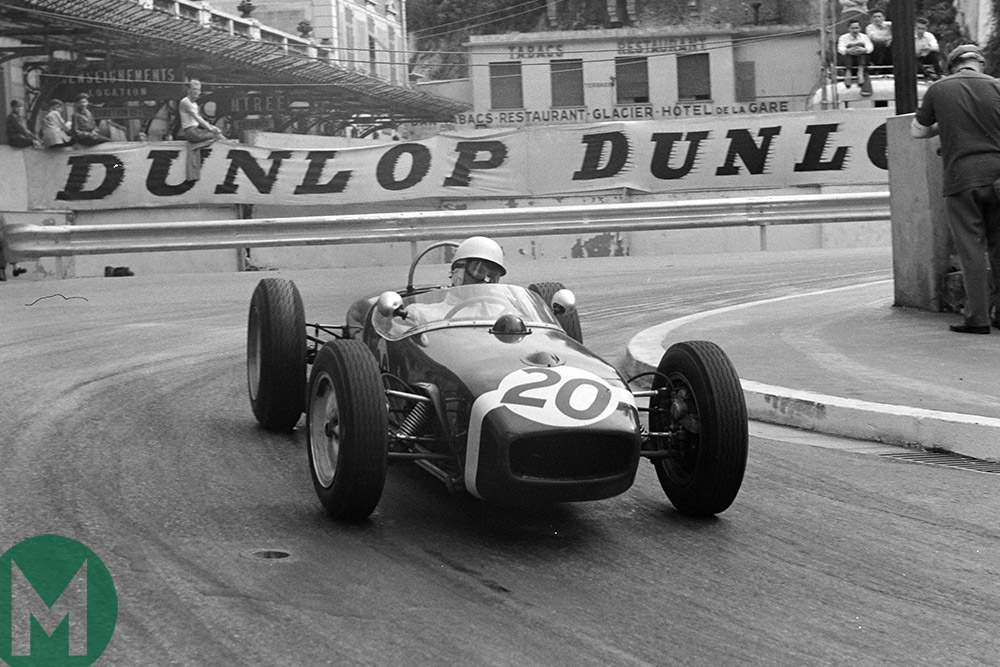 When asked for his personal favourite, Moss has been inclined to nominate Monaco 1961. “The race lasted 100 laps back then,” he said. “I’d managed to qualify Rob Walker’s Lotus 18, a one-year-old car, on pole position and got into the lead after about 12 laps.

“The Ferraris turned out to be dominant that season and they just sat behind me, applying tremendous pressure. I thought they were biding their time, because they had quite a bit more power, but I managed to keep them at bay. If I’d repeated my pole position time on every one of those 100 laps, I’d only have beaten myself by about 40 seconds…”

To this day, 60-plus years since he was at his peak, Moss has won more world championship grands prix than any other driver never to have secured the championship, despite the ever-escalating number of such races.

He has always maintained that he’d like to remembered as “a driver who preferred to lose while driving quickly than to win by driving slowly enough to get beaten”.