Old Österreichring was Formula 1 at its most camp(site): green and pleasant, beery and cheery, all frankfurters and Würlitzers.

It had a serious side, too: blind brows and bloodcurdling bends that required unblinking commitment and nerveless accuracy. 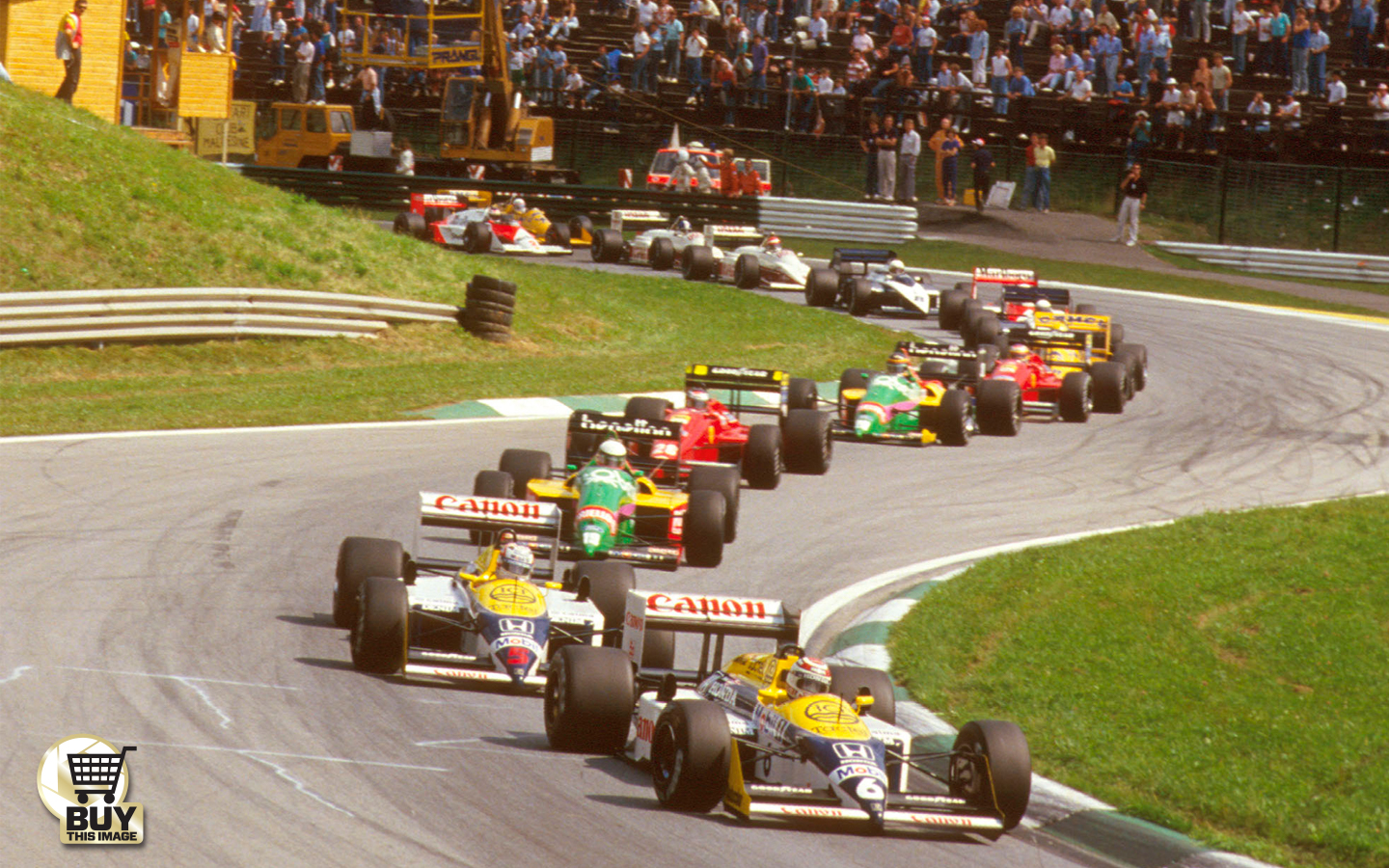 Nelson Piquet’s Williams-Honda pole lap of 1987 topped 159mph – a fraction quicker than his Silverstone best and fully 4mph faster than his Monza mark.

But two false starts that year signaled the end.

(It didn’t help that Murray Walker poked it. Nige’s bonce, that is.)

Jochen Rindt started his final Grand Prix (1970) and Colin Chapman oversaw his final win (1982). Two of the sport’s most mercurial, they would be snatched away within days and months respectively.

Two of the sport’s most compelling, Jo Siffert and Ronnie Peterson – both led from start(s) to finish (1971 and 1978) – would also be taken too soon afterwards, and through no fault of their own.

Styria’s mountains provide a bucolic backdrop to their memories.

But it wasn’t always pastoral. Österreichring’s microclimate was prone to Valkyrian thunderstorms.

It’s the circuit that comes first to mind when thoughts turn to unrestricted turbos.

Their production-block Heini Mader-prepared BMW ‘fours’ were generating more than 1400bhp: “It was like sitting on a rocket,” said local hero Berger.

The latter grabbed the lead but Fabi towed past on lap 18.

The little Italian never would lead a lap despite starting three of his 64 GPs from pole. On this occasion his engine failed the moment he nosed ahead.

Clipping a kerb exiting the chicane a few laps before had caused him to miss a gear and over-rev: “My biggest mistake. Even today I think, ‘How is it possible not to win this race?”

Berger didn’t win it either. Swapping a broken battery cost him five laps and he finished seventh.

Austrians have found it difficult to win their home GP.

Rindt qualified fastest in 1970 but had no answer in the race to the echoing flat-12 Ferraris of Jacky Ickx and Clay Regazzoni and overstretched his Lotus 72’s Cosworth DFV in pursuit.

Niki Lauda would win it – but only after numerous frustrations and disappointments.

He made his GP debut at Österreichring in 1971 at the wheel of a hired March 711. He missed a day of practice while his car lay in bits behind the pits awaiting a new engine; he qualified on the last row; and retired early because of an engine failure.

With BRM, he missed the 1973 race in its entirety because of a wrist injury sustained in a crash at the Nürburgring.

With Ferrari, he set three consecutive pole positions, only to be denied by engine failure – the Brabham of Carlos Reutemann led throughout in 1974 – and by the surprise packages of Vittorio Brambilla and Jones in the rain-affected races of 1975 and 1977. 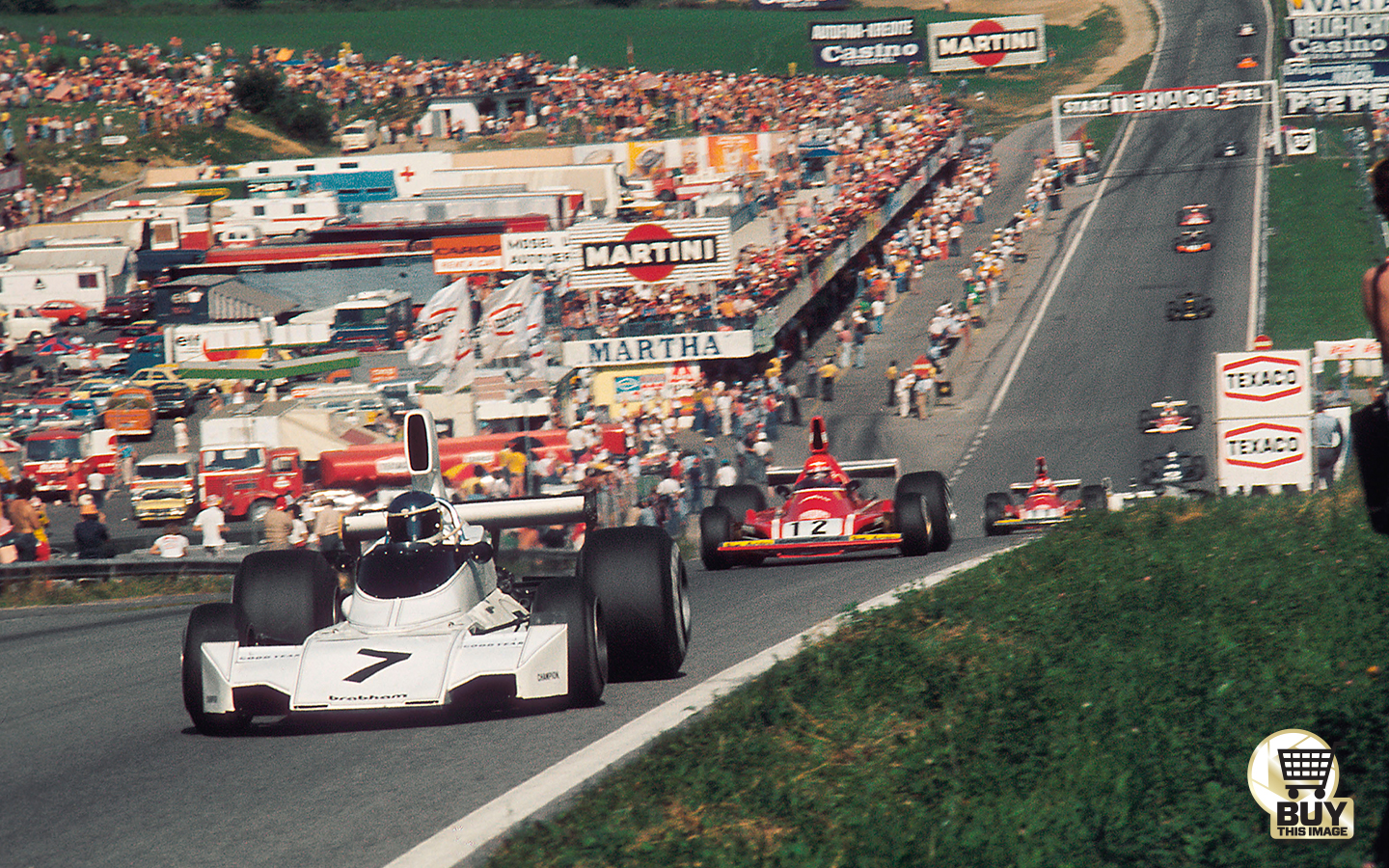 The 1976 race was held without him – and Ferrari in its entirety – a fortnight after his near-death experience at the Nürburgring.

Lauda’s long-awaited victory came in 1984 when deftly he hid his loss of fourth gear from the following – when he should have been chasing – Piquet in a Brabham.

“I can’t remember ever cluttering my mind to that degree during a race,” wrote Lauda in his must-read To Hell and Back. “By the end, my head was simply splitting.”

He might have won in 1985, too, and was leading McLaren-TAG team-mate Alain Prost when a turbo shaft broke.

Niki had announced his final retirement from driving that weekend and, as he coasted to halt, much of the crowd went home.

A venue famed for large and diverse – and often delirious – crowds has never been the same since.

Its ‘Who Killed Bambi?’ moment wasn’t when McLaren’s Stefan Johansson hit a deer during practice in 1987. Rather it was when Mansell’s clutch failed to engage fully at the race’s (second) start.

To have to restart a GP once may be regarded as a misfortune; to have to restart it twice looks like carelessness. Particularly after drivers had complained that the proximity of barriers either side of the pit straight allowed them no room for emergency avoidances.

And that was that until the track returned in emasculated A1-Ring form in 1997.

Jarno Trulli leading in a Prost-Mugen Honda is a fond memory – a reminder of Jacques Laffite’s defeat of the turbos in his soaring V12 Talbot Ligier-Matra of 1981 – but the new track was badly soured by Ferrari’s shafting of its own Rubens Barrichello in 2002.

The original track had its dark moment, too.

During morning warm-up in 1975, Mark Donohue’s Penske-run March suffered a tyre failure approaching the first corner, yet to be slowed by a chicane. The careering car scythed yards of catch fencing, which balled beneath it and sent it over the barrier and into a marshals’ post.

One marshal was killed and another gravely injured, as was an on-duty policeman; Donohue was knocked out either by a fence post or the wooden frame of an advertising hoarding.

The American, 38, regained consciousness but complained of a headache and dizziness during the helicopter flight to hospital and underwent an operation to relieve the pressure on his brain.

Twelve months later, a hirsute Watson, able replacement for the irreplaceable, presented Roger ‘The Captain’ Penske with a GP victory packed with poignancy.

Old Österreichring had a heart.