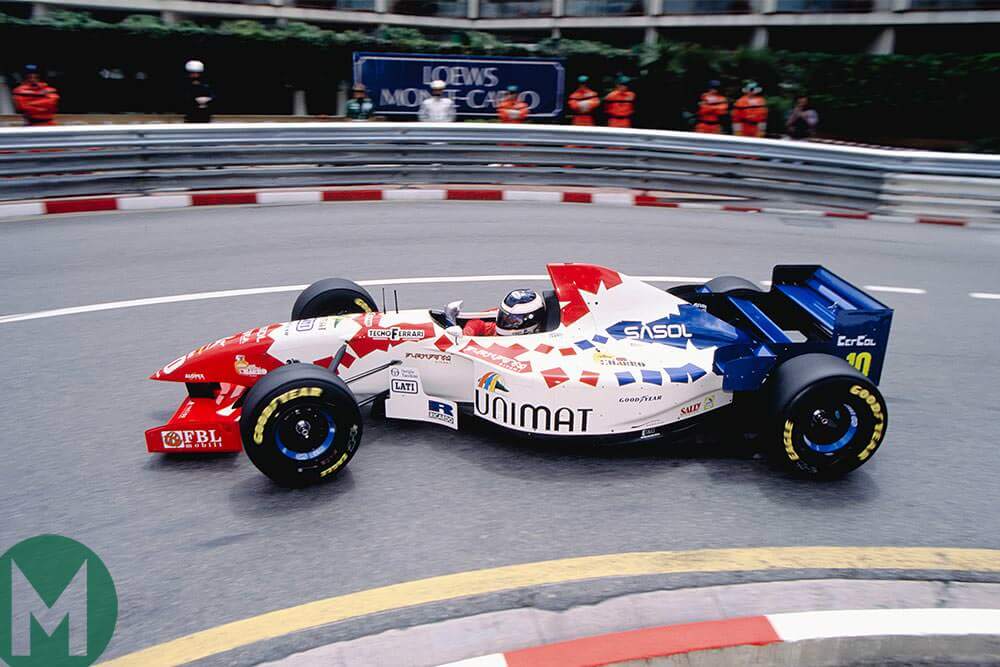 Then and now, it’s among the most bewildering images I can recall at any motor race on any continent in any era. During final free practice ahead of the 1995 Monaco Grand Prix, Taki Inoue’s Footwork had slithered haplessly down the escape road at Mirabeau – a simple driver error, the kind of thing that came all too naturally to him. He’d stalled in the process and hopped out to watch the balance of the session – no harm done. But then, in the chequered flag’s slipstream, the TV monitors focused on the car once again: it was now several corners along the road, upside down behind a flat-bed truck and apparently quite seriously damaged. What could possibly have happened – and how?

But first a little background…

Inoue had little business being anywhere near a Formula 1 car – something he today cheerfully admits as a prolific member of the Twitter community (25,700 Tweets, 66,500 followers at the moment). He has publicly declared himself to be history’s worst F1 driver – and if anyone dares suggest otherwise he’s happy to debate the point. Yet his arrival at the sport’s pinnacle marked the fulfilment of a long-standing ambition, one he’d harnessed since working as a humble restaurant waiter in his native Japan. By 1988, already 25, he’d raised enough to travel to Europe to compete in Formula Ford, where he was nurtured by racer-turned-team owner David Sears.

Huge thanks to Honda,
Taki Inoue is no longer Japan’s biggest F1 failure.

“Taki’s appetite for trouble started early,” Sears says. “He had a huge accident during a Snetterton test session and his heart actually stopped. They had to kick-start him at the track before taking him to hospital. When he came to and saw me, he burst into tears. He kept saying, ‘My car is broken, my car is broken…’ He was afraid he’d have to go back home, but we struck a deal that he and his girlfriend would come and live in my house and do bits and pieces of work to earn enough to get back on track.”

After failing to pull up any trees in FF1600, he returned to Japan to compete without distinction in F3 – for five seasons – before rejoining Sears to contest the 1994 FIA F3000 Championship, a stone’s throw from F1. His average qualifying position was 19.1 in a field of about 24, though he did manage to finish ninth in Estoril. It was a step forward, albeit not on a scale that marked him out as F1 material. “He improved hugely during that season,” Sears says. “If he’d stuck around for another year he might have looked half-sensible, but he wanted to be in F1.”

A deal was brokered for Inoue to make a one-off appearance with the cash-strapped Simtek team in the Japanese GP. He made it onto the grid – 26th and final qualifier – but in a fierce downpour he managed only three laps before crashing on the pit straight.

Appetite whetted, Inoue used backing from Unimat (which makes the vending machines that adorn almost every street corner and railway platform in Japan) to secure a 1995 F1 deal with Footwork. “Things always seemed to happen to Taki,” says team principal Jackie Oliver. “Some of it was due to him pushing the wrong buttons, but other incidents were plain extraordinary.” He’d retired from the season’s first four Grands Prix, thanks to a couple of spins and two engine fires, and then came Monaco.

Which is where we came in…

As a recovery truck arrived to tow Inoue’s stranded Footwork back to the paddock, rally legend Jean Ragnotti was about to take to the track in the course car, a Renault Clio Maxi. Unaware of the rescue operation ahead, he was in the mood to put on a good show… and did just that until he reached the swimming pool complex. Pressing on with customary gusto, he came upon the trundling truck/Inoue combo. Ragnotti threw the Clio sideways, but still clobbered the Footwork quite hard. “It’s a good job Taki had the presence of mind to steer away from the truck,” Oliver says. “As he took avoiding action, though, the car dug in, flipped and the tow cable sliced clean through the top of the chassis.”

Wearing helmet, but no belts, Inoue was unhurt. “To this day I don’t understand that,” Oliver says.

Later in the campaign, Inoue’s car caught fire again in Budapest – and, having jumped out, he was knocked down (once more without injury) by a Tatra belonging to the local fire service. “He was definitely the unluckiest driver I ran,” Oliver says.

Undeterred, Inoue tried to secure a seat with Minardi for ’96 but the withdrawal of a potential sponsor nixed the deal.

His F1 days were over.