What can we read into the Barcelona testing times? 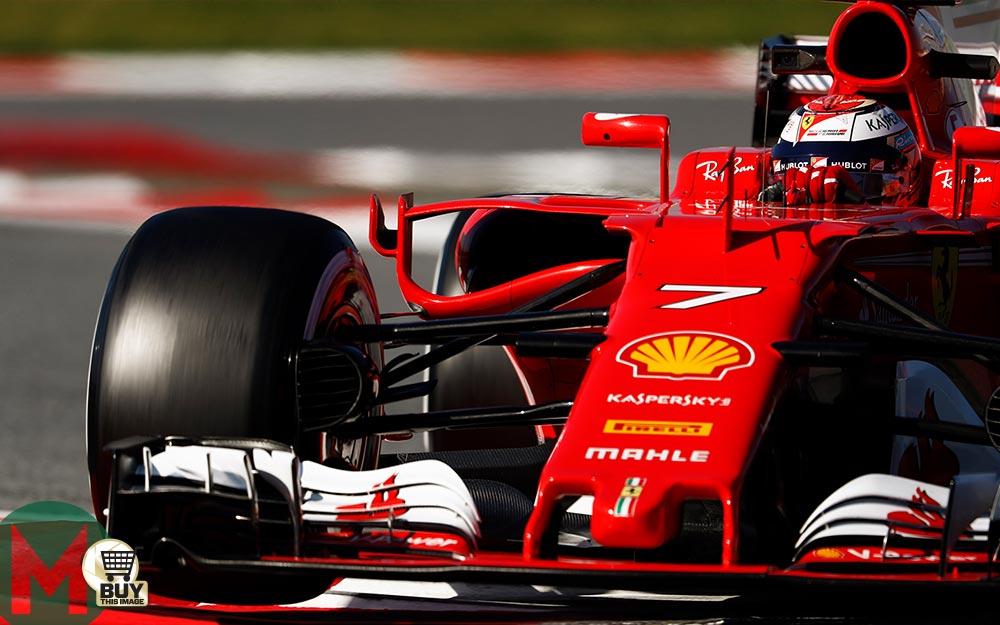 The stand-out stories from two weeks of pre-season testing at Barcelona appear to be a) Ferrari and b) McLaren-Honda, the former a feel-good promise of Mercedes-busting pace, the latter an unexpected disaster that could threaten the long-term viability of the whole partnership.

But, as always, it’s best to be very cautious in trying to read the runes of winter testing. There’s sound logic to suggest the Ferrari pace might not be quite as sensational as it seems and that the disastrous Honda performance will not set the seasonal template.

The 2017 generation of cars are, unsurprisingly, way faster – and look it. On the final day Kimi Räikkönen set the best time of all at 1m 18.6sec in the new Ferrari SF70H (on super-softs), around 3.5-sec faster than last year’s pole position time. This was on a three-lap run (fast/slow/fast).

This time tallied very well with Sebastian Vettel’s 1m 19.3sec on softs a couple of days earlier, also on a three-lap run. Pirelli reckons the time difference between the super-softs and softs was in the order of 0.6-0.7sec. On the same day that Vettel did that time, Mercedes’ Valtteri Bottas – on a three lap run – also recorded a 1m 19.3sec, but using the super-soft tyre. So on a tyre Pirelli reckons is 0.6-0.7sec slower than that used by Bottas, Vettel did the same lap time. So does that mean the Ferrari is 0.6-0.7sec faster than the Mercedes?

Probably not. Muddying the waters, as always, is the matter of the respective fuel loads. Ferrari habitually runs testing and practice with a base fuel weight of around 30kg (ie, it doesn’t run lighter than that). That’s about 18 laps worth at Barcelona. Mercedes usually runs a heavier base weight for the purposes of testing and practice – maybe as much as 60kg. That 30kg difference would typically cost around 1sec of lap time. So if these weight assumptions are valid (and they may not be) Vettel has matched Bottas’ lap time with a fuel load 1sec faster but a tyre up to 0.7sec slower. On the same tyre, Räikkönen has beaten Bottas’ time by 0.7sec. All of which implies the Mercedes would be 0.3sec faster than the Ferrari on the same tyre compound and fuel load. 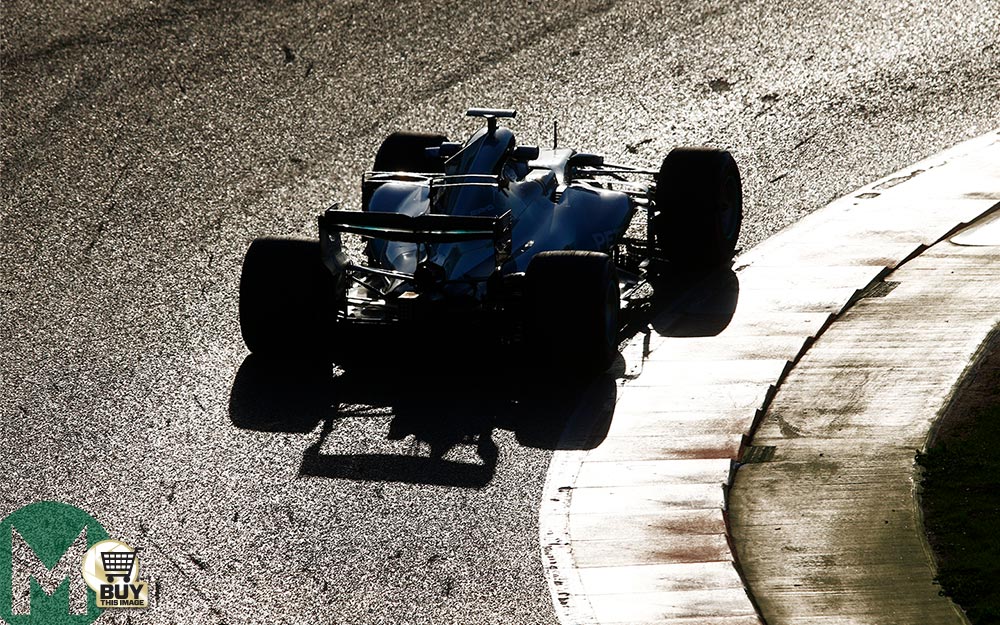 However, if the fuel loads are comparable and Ferrari has changed its policy then yes, it’s quicker and the lap times are telling the real story. Could it be that Ferrari’s unique sidepod layout has given it an aero advantage? Much has been made of the fact that the conjoined sections ahead of the actual sidepods are there only to meet the new regulation that the sidepods be angled at 75-degrees (in plan view). These joined-on vanes allow the Ferrari’s actual sidepods to be set at 90-degrees and there’s been speculation that there may be an aero advantage from this. More likely is that those sections are there to guide the airflow into the uniquely high sidepod openings – allowing the air to them a much clearer passage as it no longer needs to travel through the front suspension. If the air arriving to cool the radiators can be made to flow faster in this way, then the radiators – and the sidepods that contain them – can be smaller. That just might be the trick that is giving the Ferrari an edge.

On the other hand it may all just be fuel weights. It’s impossible to know – which sets up the Melbourne season-opener on a nice note of intrigue. Out on track, the Ferrari looks superb, with fantastic braking, great stability, traction and a very driveable-looking balance. The Mercedes W08 has, if anything, more high-speed grip but doesn’t look as malleable for the driver, with an underlying shallow understeer trait. That’s how it would look if the Ferrari was genuinely 0.6sec faster. It’s also how it would look if the Ferrari was running 30kg lighter…

Red Bull? At Barcelona it was clearly only the third best car. It looked dynamite through the slow sections at the end of the lap but not quite as impressive through the fast sweeps as the silver car or the red. Renault though was still running its engine in what Christian Horner described as ‘Clio mode’ until reliability had been established. And knowing Red Bull, it will likely bring more development parts to the Melbourne car than anyone else. 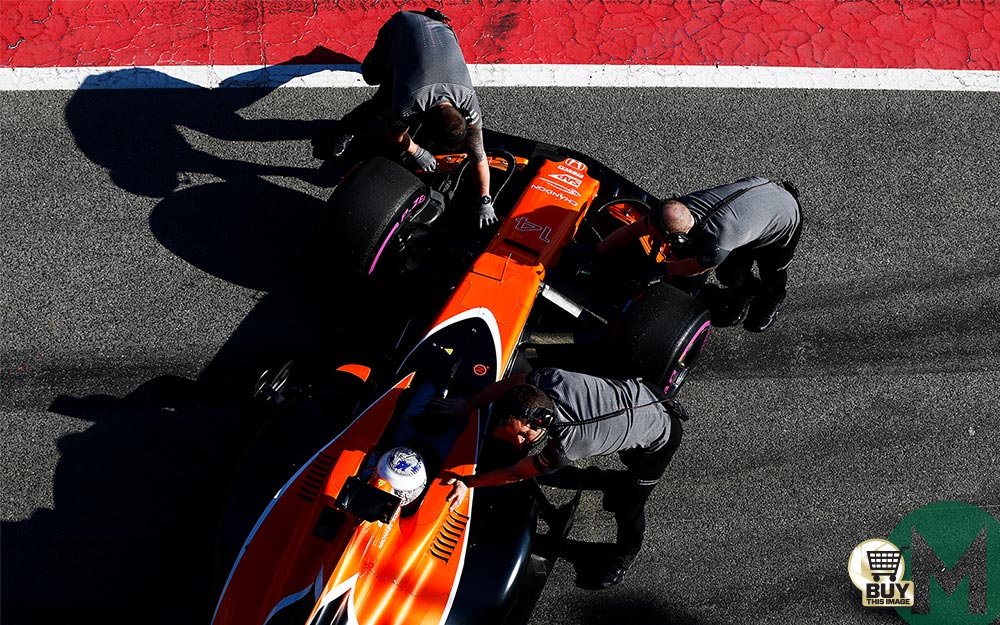 Williams, Haas, Renault, Force India and Toro Rosso appear to be the midfield. Sauber appears to be 2017’s tail-end Charlies. Leaving just McLaren, horrifically unreliable and, so far, slow, almost 30kph down on the best through the speed trap and around 2.7sec off on race pace.

Fernando Alonso did not hold back his frustration with Honda. But no power and no reliability are quite possibly not two different problems, rather than two symptoms of one problem. This is often the case, especially in the hybrid engine era. Excessive valve temperatures are rumoured to be at the root of the new Honda’s problems. Whether this is inlet or exhaust valves we do not yet know but either way, such an engine would have to be run very far from its potential performance optimum in terms of ignition timing and fuel supply in order to keep the valve temperatures under control. That in turn would mean much less energy for the MGU-h to recover. And the slower end of straight speeds would mean less for the MGU-k to recover. The concept of the hybrids mean that problems are compounded just as gains are. Hence it could be that the Honda’s intrinsic problem isn’t power – but that cannot be known until the reliability problem is fixed. So it’s a disastrous start to McLaren’s season but the defining fact will be in how fundamental the problem is within the internals of that Honda engine. It could be that a single quick fix cures everything – including the power. Then again….