The closing laps of the Russian GP turned the race on its head, with the late rain storm ultimately costing Lando Norris his shot at holding off Lewis Hamilton and scoring what would have been a memorable first Grand Prix victory.

No one lost more than Norris in the conditions, as he tumbled down to an eventual seventh place, while in terms of the big picture no one gained more than Max Verstappen, leaping from the same seventh place to second, and gaining crucial points in his quest for the World Championship. It really was almost as good as a victory, given that the Dutchman had taken a grid penalty for a new Honda power unit, and started from the back of the grid.

There were other winners and losers, and of course it all came down to the timing of the decision to switch from slicks to inters as the final laps of the race ticked away.

How those decisions were made is one of the more intriguing aspects of what unfolded as the drivers slithered around Sochi and tried to calculate whether or not they could make it to the flag on lap 53 without changing tyres.

Remarkably the sequence of tyre changes stretched out over five laps from lap 47 to lap 51. The other intriguing stat is that from the moment George Russell set everything in motion by being the first to dive into the pits, eight minutes and fifty five seconds elapsed before Charles Leclerc became the last driver to finally crawl in to take intermediates. For some, it must have seemed like an eternity.

Here, on a lap-by-lap breakdown, is how the drivers pitted. The positions indicate where the key players were when the rain began, and their final classification:

From 11th place Russell was the first driver to make the call to pit, and it could have been a blinder, but for one vital factor – he had no new intermediates left, having used them all up to get to Q3. Others who qualified well had a new set left because they has saved them for the end of Q3, only for the track to dry, enabling them to use slicks instead. Russell thus wasn’t able to make the sort of progress enjoyed by Valtteri Bottas.

For Bottas, the call to go to slicks was a no-brainer and when two of three cars ahead pitted – Russell and Kimi Räikkönen – he followed them in. He’d endured an awful afternoon having taken a power unit grid penalty, and was running a lowly 14th, so he had nothing to lose. For Mercedes the bonus was he could serve as a guinea pig for Hamilton.

AlphaTauri made the highly unusual call to put Yuki Tsunoda on fresh soft tyres, the team believing that the track would dry and the new, hot rubber would be just the ticket. That call showed just how easy it was to get it badly wrong… 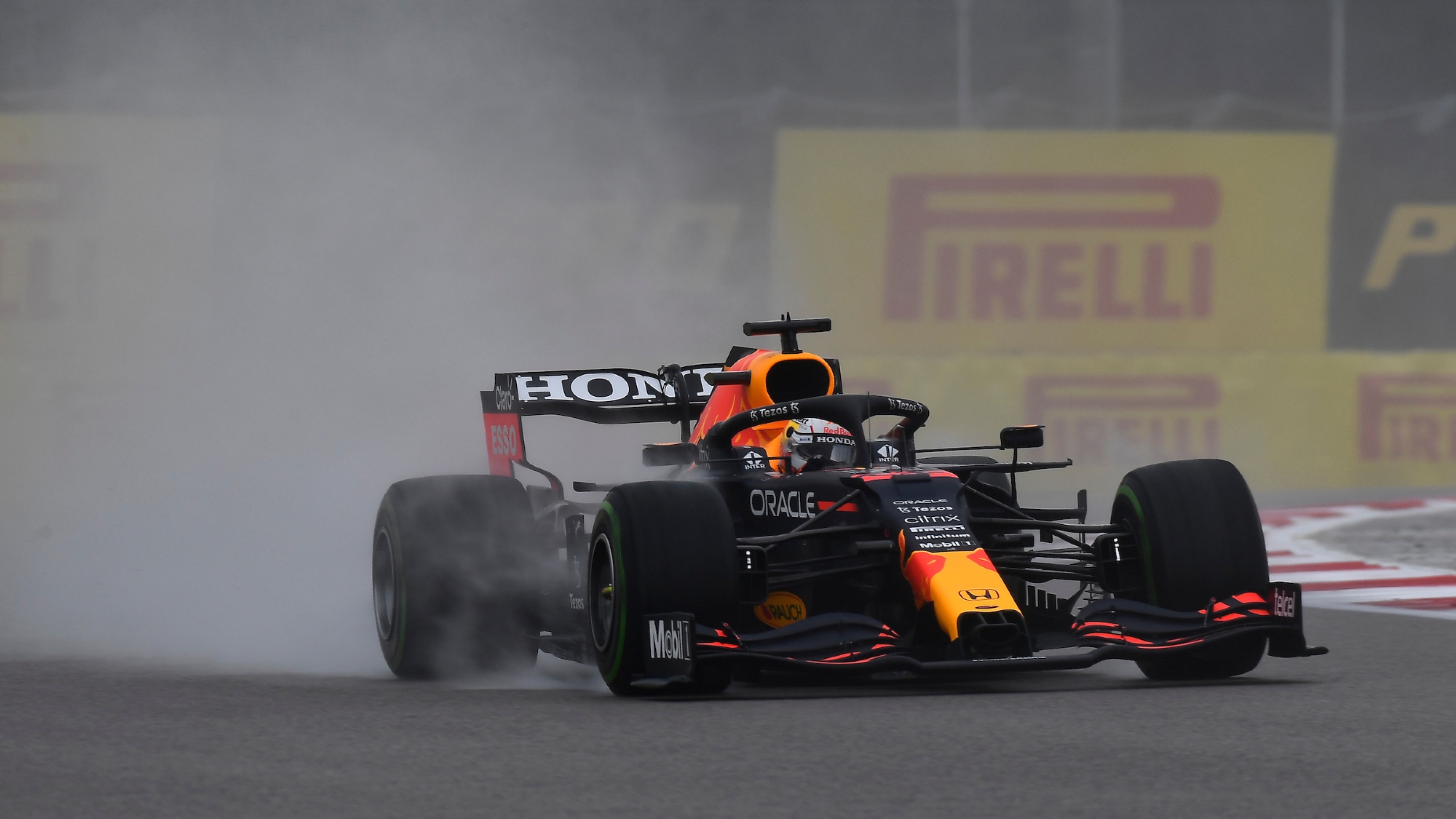 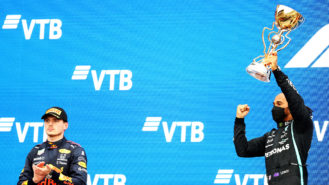 At this point only drivers outside the top 10, and thus out of the points, had stopped. Next time around on lap 48 it was the turn of those who had much more to lose, and in effect were making quite a brave call.  The rain was starting to intensify, worse in some places than others, but it was still marginal.

Carlos Sainz had been third, but the Ferrari is a real handful in the rain. Having lost a place to a charging Sergio Perez and then another to Verstappen when he slid wide, he decided it was time to come in.

In fact he followed the Dutchman into the pit lane, Verstappen having had a should we/shouldn’t we chat with the pit wall before deciding in the last couple of corners that he should come in. Sainz and Daniel Ricciardo were immediately behind, and for all three, the timing would prove to be perfect.

Running second and with Norris in his sights Hamilton had much to lose. Indeed he ignored a call to come in on lap 48, and subsequently opted to pit on lap 49 – in fact he had such an advantage on those behind that the team knew by then that he would retain second come what may.

The rain appeared to hold off for a minute or two around that time, which is possibly why only Tsunoda pitted on that lap. Indeed even as he drove out of the pit lane Hamilton noted, “It’s stopped raining, man,” and with four laps to go he probably thought that he might be caught out. Leader Norris aside, several others had decided to roll the dice and stay out.

Over the course of lap 50 the rain turned into a downpour and it was very evident that it was impossible to stay out. Fernando Alonso and Perez had made it to third and fourth by doing so, but they and others realised that they wouldn’t be able to survive on slicks. Only two drivers, Norris and Leclerc – the latter had jumped up from ninth to fourth by braving it out – had yet to stop.

It was sadly a lap too far for both Norris and Leclerc, and on that fateful lap 51 both men went off the road. Norris was passed by Hamilton for the lead, and was by now desperate to get back to the pits in one piece. He resumed in eighth, gained a place from Räikkönen, and crossed the line in seventh. Leclerc lost even more time with his off, and tumbled out of the points.

It was a remarkable sequence of events. All those numbers, all that data, all those strategists at the track and back home in factory “mission controls” constantly running different scenarios, and in the end in most cases it came down to the gut feeling of the driver, based on what he could see in front of him and the grip level that he could feel through his backside.

An intriguing aspect is that the level of input from the pit wall varied between teams. Some gave clear instructions, “box now” and so on, while others fed info and waited for the driver to make the call. The challenge is that drivers can’t see the bigger picture of what others are doing, how lap times and gaps and changing, and what the weather radar is saying.

“It came to the point where we had to make the decision to box or not to box,” Norris said. “And at the times when it was tricky and we were going off track here and there, the slick tyre was still the tyre to be on. Of course, it was like 10 seconds a lap off, but the intermediate is not going to be 10 seconds quicker. It’s 10 seconds to a proper dry lap time.

“So even if he was three seconds quicker or something, Lewis, or five seconds, I still would have managed to hold on to the win.

“I decided to stay out because the team said it was only meant to be drizzling like that, and that’s as hard as the rain was going to get. For whatever reason we didn’t know or see or anticipate that it was not just going to be a drizzle, it was going to be a lot of rain. And that’s where we went wrong in the end of the day.”

Naturally there was a wave of sympathy for Norris, even from rival teams and drivers. It was his call to stay out as long as he did, although after the race he rued the lack of clear information from the pit wall.

It’s worth pointing out too that at one stage, when told that the conditions were worsening and cars were going off the road, he told his engineer to “shut up,” an understandable message given the pressure he was under. However, that might have cost him subsequent vital information. In the end he wanted a decisive call from the pit wall – come in now.

“Yes, because from one lap to the other, the whole thing changed, the game changed completely,” he explained. “And that final lap when Lewis boxed, the slick tyre was still the tyre to be on. And that lap they asked do you want to go on to the inter? And for the lap I just did, I didn’t, because the slick tyre was easily the correct tyre. 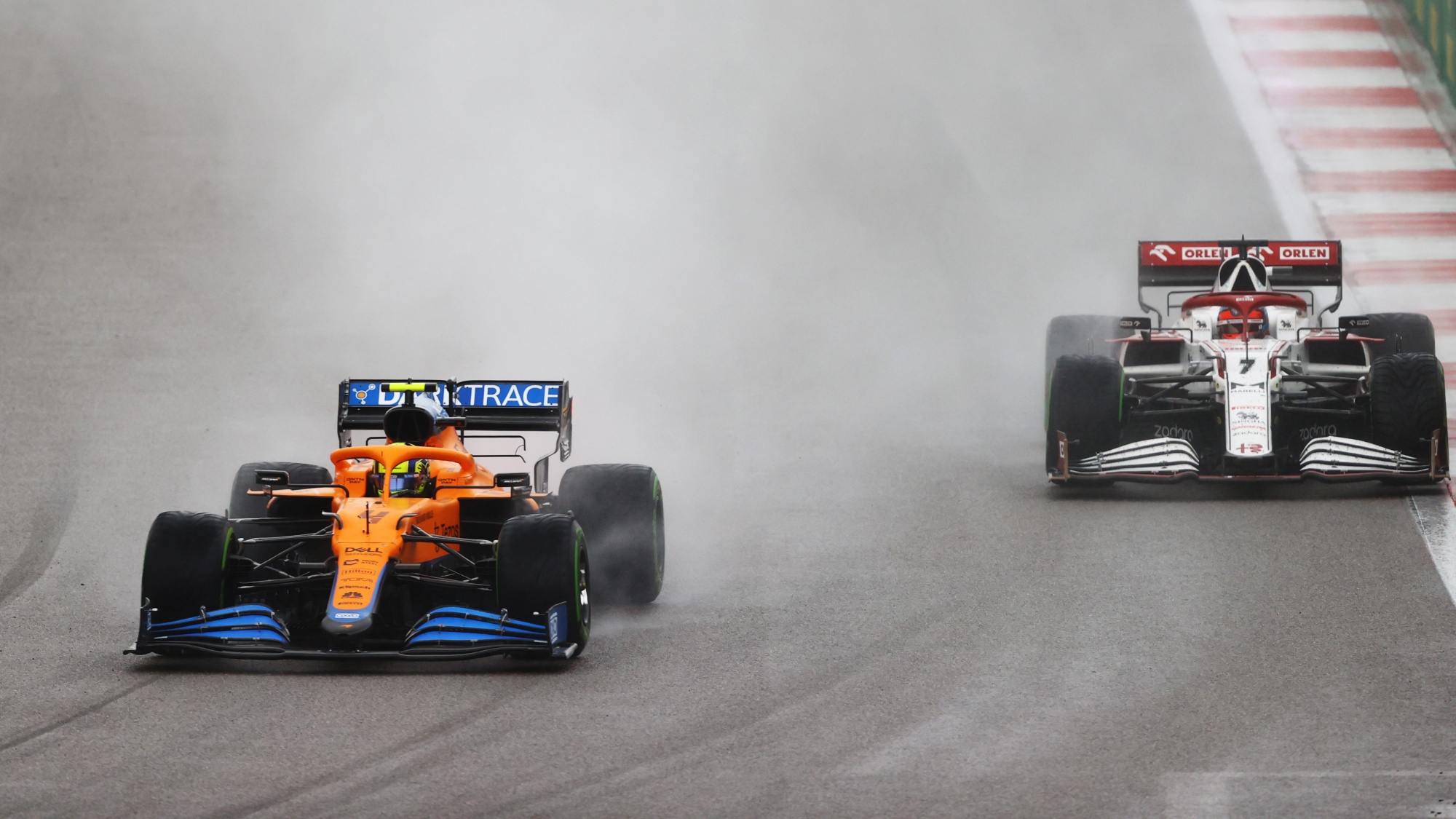 As leader, Norris had the most to lose by being proactive and pitting. In one way it was the opposite of what happened in qualifying, when the Mercedes drivers stuck with the safe intermediates option on a drying track, and those further down the order took a risk and went for slicks – and Norris earned himself pole. However, he insisted that staying out was not a risk.

“It wasn’t a gambling situation. It was dry, and raining in a couple corners, and the slick tyre was the correct one to be on. So there was no gamble with that. We were on the best tyre. But it rained a lot more than I got told, or that they knew, and if they knew it, they didn’t tell me to box.

“We did what we thought was best at the time, and I can’t fault them for that. And I’ve got to stand by their decision or my decision, and we’ll review it, and try and do better next time.”

There’s no doubt that between them Norris and the team could have done better, but it’s all too easy to say that in hindsight. This week the Briton spent time in the Woking simulator, recreating wet weather scenarios and in effect trying to improve comms for the next time this happens.

And until he finally lands that first win Norris will carry the pain of what happened in those final three or four laps.

“It’s difficult because we could have achieved the best result in F1, and I could have been a race winner. And I finished in seventh place in the end. It’s difficult more because of like a just a loss and a heartbreak kind of feeling, rather than a I messed up and I just did something stupid.”