For all the F1 history that Ayrton Senna created, there’s some irony in the fact that many see his first win as his greatest. Never mind the Donington ‘93 masterclass, his comeback at Suzuka ‘88 or crushing displays of supremacy at Monaco – for many, his lights to flag debut win at a sodden 1985 Portuguese Grand Prix is the one they hold in highest regard.

When asked by Nigel Roebuck if he rated Donington as his best, the Brazilian instead proffered his Estoril ‘85 performance: “The Renault turbo – So much power! But the biggest difference is that then we didn’t have traction control…”

As F1 returns to Portugal 35 years on, Motor Sport spoke to Senna’s Lotus and McLaren race engineer Steve Hallam about the events of that landmark weekend.

“If I say it was a great moment, that was the world’s biggest understatement,” says Hallam. “It was a very special moment.”

For a Lotus team that had won just once in the past six years, it was quite literally a watershed.

“We were racing at Hockenheim.” Hallam remembers, “At the end he came around so far in the lead, I thought there must have been an accident.

“It was like ‘Where’s everybody else?’ And then they all came around the corner. He was just gone.

“I think people knew very early on that he was such something special.”

After his impressive rookie year at Toleman, Senna arrived at Lotus and wasted no time ingratiating himself with the team. 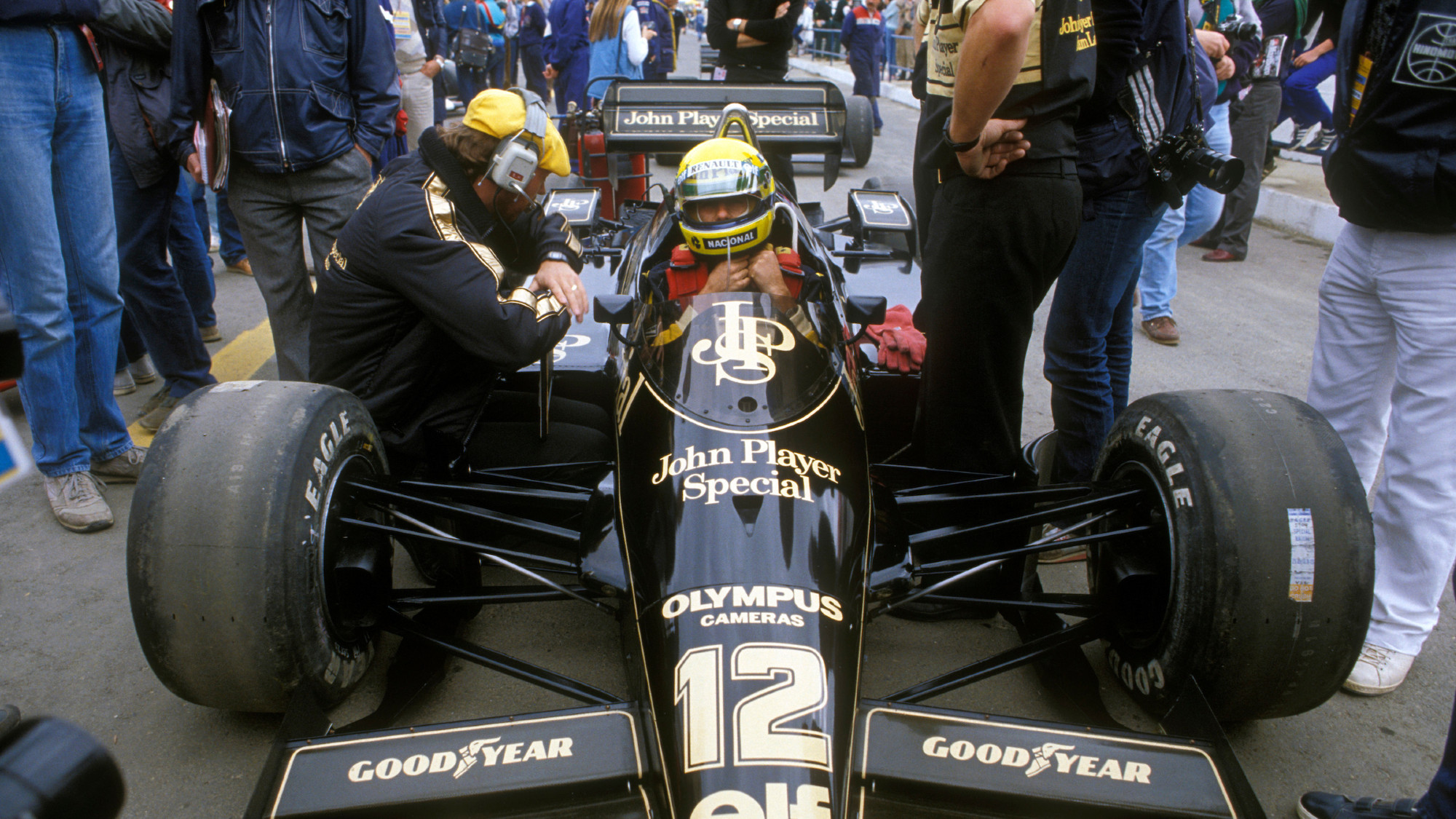 Senna speaks with Hallam in the Estoril pit lane

“Ayrton was such a revelation,” Hallams recalls. “First of all, he was young, fresh. He was like a sponge – trying to learn. Ayrton lived in Norfolk for that first year at Lotus and used to come to the shop every day. We even gave him a desk. He used to go running with mechanics at lunchtime or they’d take him down the pub for lunch.

“Ayrton knew the whole factory and all 68 people that worked there. He genuinely became part of the team, because he was just a fixture.

“He was always asking a million questions, hungry for knowledge. He just wanted to do a good job – and he did. The years that we had him at Lotus were spectacular.” 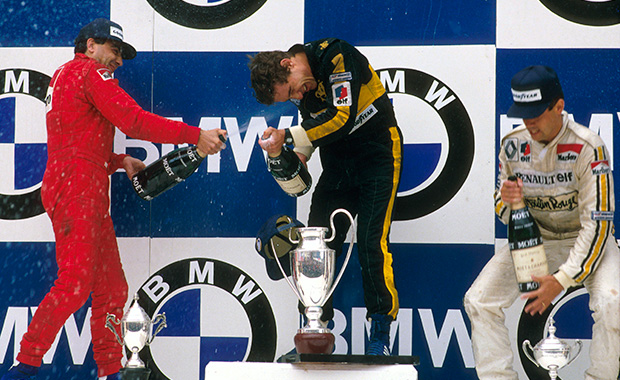 An omnipresent and irrepressible Brazilian spelt the beginning of the end for lead Lotus driver Elio de Angelis. Previously the main man at Hethel, Hallam remembers the Italian soon found himself marginalised.

“Elio had been with the team for a number of years. Everybody liked him – super chap.” he says “You only recognise this retrospectively, but Ayrton took Elio’s space. It wasn’t a deliberate thing, it was simply because he was there all the time.

“I think he knew it was going to be a challenge for him, and there was the odd occasion that Elio was there (similar on pace).

“But there was this relentless force in the team that was just consuming all the air – and it was Ayrton. Ultimately, Elio left at the end of the year and went to Brabham.”

“He was so good at maximizing everything to get the absolute best. He was phenomenal.”

Early on however, it was advantage de Angelis who had taken a podium place at the season opener Brazil, as Senna retired with fuel-pump issues.

Come Estoril, Senna seemed to look to assert himself. He put himself on pole with a blistering qualifying time: 0.4sec ahead of Alain Prost and a full 1sec clear of his Lotus stablemate. Senna found he had an innate ability to exploit his Goodyear qualifying tyres’ potential, immediately using it to his advantage. Of his 61 poles, this was his very first.

Hallam explains Senna’s one-lap approach and just what made him so good in qualifying sessions. With no tyre sensors or telemetry, it was all about feel.

“We used to say ‘How the hell do you know when to go with the qualifying tyres?’” he recalls. “‘How do you know whether you’ve got the fronts and the rears in and that they’re going to last you to the end of the lap?’

“He brought that ability to the table. That set him apart from the other drivers. I’m not saying the other drivers didn’t know how to bring the tyres in, because they obviously did. But he was so good at maximizing everything, all the variables, to get the absolute best. He was phenomenal.”

The Brazilian still had it all to do come Sunday though. Dark clouds gathered at midday and by the race start Estoril was experiencing monsoon conditions. A Lotus team that hadn’t won a race for three years weren’t overly confident.

“We were so not confident!” Hallams remembers. “Not that we doubted the driver’s ability, but in those conditions, it really is down to them. There’s just the classic (wet weather set-up) brake-bias two turns to the rear and ‘Good luck chap!’”

Senna didn’t appear particularly fazed – this was his moment. As the lights went out, the Hethel new boy rolled away calmly to convert pole into the race lead. De Angelis meanwhile jumped from fourth to second, providing a handy 97T-shaped buffer between the leader and the rest of the field.

Subsequently, Senna simply drove off into the distance, making the extremely difficult appear a breeze. By lap 10, he’d pulled out almost 13sec on his team-mate.

What was key to his advantage in the wet?

“There was the recognition that ‘Oh my god, this guy is truly special, this isn’t just a one-off’”

“Those cars have a lot of power, they were really quite crude compared to Formula 1 cars decades later. Those drivers really did have to manage throttle usage and their gear selection.” says Hallam.

“I mean that in two respects. One is that it was an H pattern shift. But also just coping with the low grip conditions from a wet race. Ayrton said ‘Well, doesn’t everybody run a gear taller in these conditions?’ I’m not sure everybody did, but he was doing so in an effort to maximize the usage of the car for the prevailing conditions.”

Senna’s instinctual feeling for the rubber he had on the road also came into play.

“It comes back a little bit to the explanation about the qualifying tyres.” Hallam tells us, “The drivers that were good at feeling the tyres and knowing how to manage tyres were also good at managing the wet tyres.

Born on 21 March 1960, Ayrton Senna would be celebrating his 60th birthday this year. His status as one of the sport's greats remains undimmed, more than 25 years after…

“Canny drivers, if they recognize that the rain was easing, would drive on the wet parts of the track. Those same drivers would note and look for where the grip was on the track. It wasn’t always on the racing line. That would rubber in and you needed to be somewhere else on the track to find the grip.

“If they were following a car, they would learn to drive in its wheel tracks, due to it having pumped the water out the way. Some drivers cottoned on to all of these tricks quicker than others. Senna was just good at it.”

The exhibition of wet weather skill continued as by lap 20 Senna had a 30sec gap on his team-mate.

Did the team feel the need to rein him in? The Lotus team had unfortunate recent memories to consider.

“We’d had the bitter experience of the year before with Mansell at Monaco, which was that race was being run under wet conditions.” Hallam remembers, “We were leading that race at Monaco. We had a discussion on the pitwall – Nigel was going away at a great rate of knots. We were just getting ready to show him the word ‘Ease’ on the pit board, when he hit the white line going up the hill and broke the suspension. 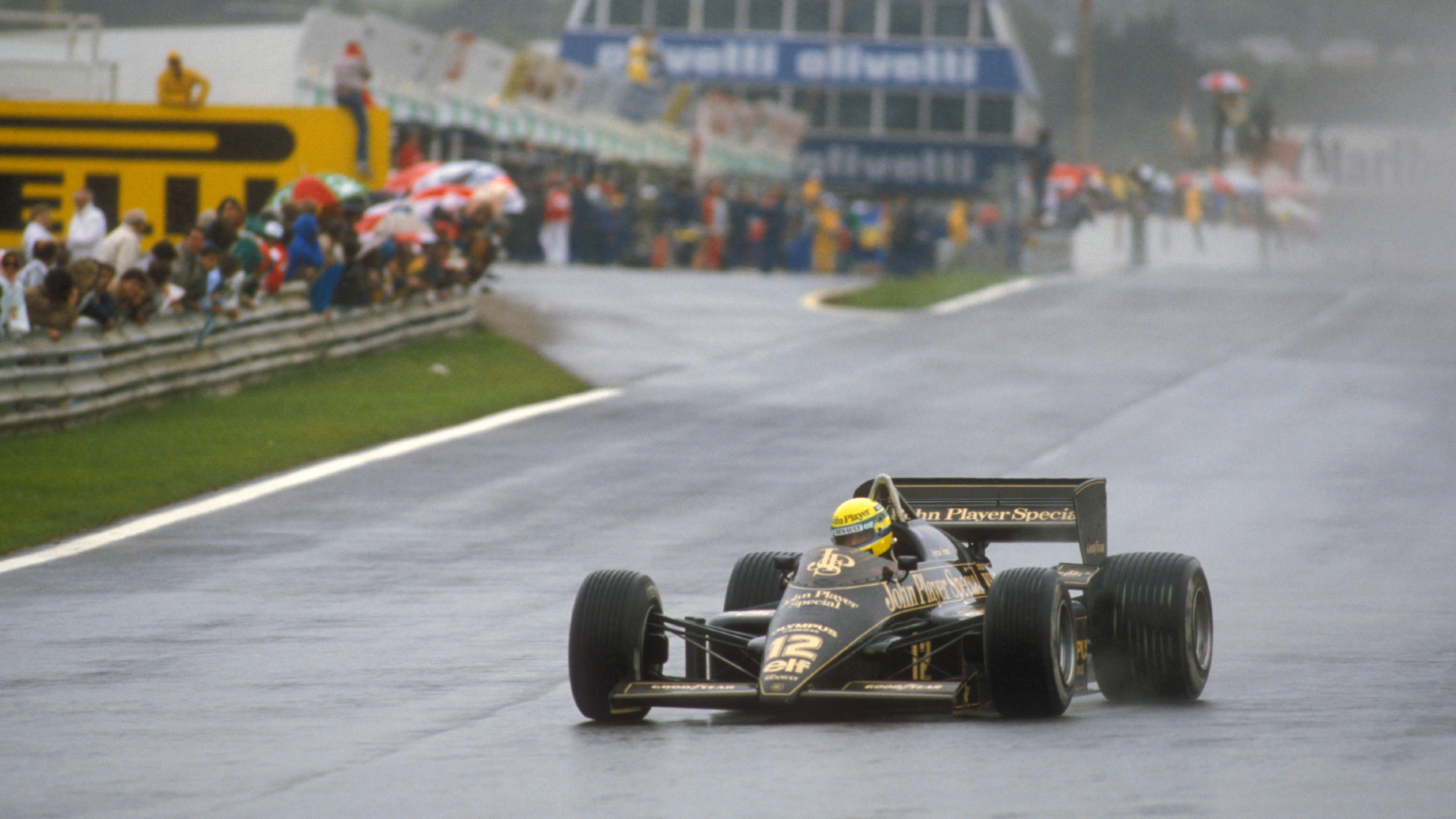 The Lotus driver out in front during the race

“But we didn’t feel we needed to do that with Ayrton, he was a different style of driver. He had control and the driving didn’t appear to be a drama.”

With Keke Rosberg spinning out, Nelson Piquet pitting more times than he cared to remember and Riccardo Patrese torpedoing Stefan Johansson, it was complete carnage behind the leader.

One of the race’s defining shots was of Prost, considered by many to be the new pre-eminent force in F1, helplessly spinning out when trying to simply drive in a straight line down the pit straight. After hitting standing water, his McLaren pirouetted before smashing into the barrier rear-wing first.

While a picture of serenity for most of the race, even Senna himself had a few lairy moments, at one point having all four wheels on the grass.

“He was honest enough to say ‘Okay, there were a couple of times in the race where the car got away from me. It wasn’t my skill that brought it back. It was just luck.’” comments Hallam, “It’s one of those deals where the better you are, the more lucky you get.”

Ultimately, Senna would lap all but one car, Ferrari’s Michele Alboreto, when the race hit the two-hour limit, meaning Lotus’s new driver was an emphatic winner in just their 2nd race together.

Images of Lotus mechanics spilling out on the track as Senna took the chequered flag, the victorious driver undoing his seat belts to rise up out the car in celebration, his team jumping for joy as he entered parc ferme, have now all become iconic. It was also the team’s first win since talismanic founder Colin Chapman had died three years previous. They had climbed the mountain once again.

“Having gone through two hours of racing, non-stop, no pit-stops, no safety cars, – the release of tension was phenomenal.” says Hallam.

“Then there was the recognition that ‘Oh my god, this guy is truly special, this isn’t just a one-off’; the way we were all able to acknowledge the win was just great, it’s not quite the same nowadays.

“He taught everybody a lesson in how to drive in the rain and really placed himself on the map. We were all wringing wet, including him. And that night we were on a plane home – still soaked!”

Buoyant at the result, Lotus felt that with Senna, it might just be their time once again.

“[Team boss] Peter Warr famously said to us ‘You know, if we can make the car finish the race, he’s gonna win it, it’s as simple as that.’ So the total focus of the team was on making the cars finish the race. If we did that, if he was running, he was gonna be up the front.

Unfortunately for the Norfolk squad, Senna would only take one more win that season at Spa-Francorchamps, with Prost’s greater reliability and consistency winning him the title.

However, as the multitude of articles (including this one), YouTube videos, social media posts released this week show, Senna’s first win was one which made as much of an indelible mark on F1 history as any of the other 40 which followed.