17 races in 163 days, the 2020 Formula 1 season will live in the memory for being unorthodox but entertaining, with the Europe-centric calendar hosting a number of brilliant races.

With brand new winners, deputising drivers and returning venues, there was plenty of unpredictability, despite the championship table having a familiar leader.

Three visits to Italy, the return of the Turkish Grand Prix, Nürburgring and the first Portuguese GP for 24 years led to several brilliant Sunday afternoons.

The races here have been chosen for the action each produced rather than the end result. Here are the best picks from the 17 rounds of the 2020 F1 season.

It was a long time coming but the first round of the delayed 2020 championship did not disappoint with incident and unpredictability. Much of the season followed in similar stead.

The chaos couldn’t wait until lights out, as Lewis Hamilton was slapped with a three-place grid penalty for ignoring yellow flags in the final Q3 runs. The drop wasn’t confirmed until 30 minutes before lights out.

It turned out to be somewhat of a pyrrhic victory for Red Bull though, as Max Verstappen’s RB16 conked out during the opening phase of the race, leaving the team’s hopes of victory in tatters.

Several safety cars kept the field bunched up, keeoing the action frenetic throughout the field, and the battle between Racing Points and McLarens set up a season-long duel for best of the rest in the championship.

Rivals further behind though made another free stop, and it meant Alexander Albon was sitting pretty on fresh softs and had reignited Red Bull’s chance of victory. 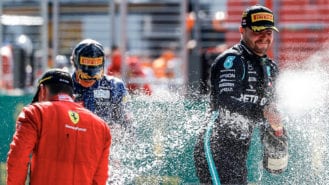 Hoping to make up for his missed opportunity from Brazil 2019, he attempted to clear the Mercedes the long way round, but contact once again turned Albon around and left him out of the points.

The afternoon wasn’t done quite yet either. Hamilton was handed another sanction, this time a five-second time penalty, bringing him into range of those running just behind.

Norris had demoted Perez with three to go, rudely bouncing his way down the inside at Turn Three to seize fourth. A ‘Scenario 7’ blast for the McLaren driver earned him fastest lap on the final tour and his maiden podium by a tenth of a second over Hamilton, winning the time in the final two corners of the race.

It was a race that set the tone for the majority of the season, as plenty more drama would follow.

A wet race always promises action but along with the recently resurfaced Istanbul track, the combination put on quite the show.

While much of the build-up focused on the fastest ever Formula 1 cars tackling the notorious Turn Eight, the resurfacing along with the weather meant that tyres were still spinning up halfway down the main straight.

Drivers were sliding over the track making it look like an ice rink from Friday onwards, and it provided a mixed-up grid in qualifying and some of the toughest conditions all season.

Esteban Ocon and Valtteri Bottas became the first victims on race day, spinning at the first hurdle. Ocon’s mistake was costly but Bottas’ pirouette had effectively ended his slim hopes of carrying on the title battle. It was just the first spin in a long day.

Verstappen looked like the one to watch but an impatient moment chasing down Perez for second put pay to his hopes. Cooped up beneath the rear wing of the Racing Point through the Turn 11 flick, he lost all downforce and ran wide onto the runoff and standing water, resulting in a clumsy spin.

Albon was soon facing the wrong way himself, allowing Hamilton to clear the last of the cars between him and race leader Perez.

From that point on it was game over for everyone else as he easily cleared Perez and somehow coaxed another 21 laps out of his well-used intermediates, worn to slicks by the end. 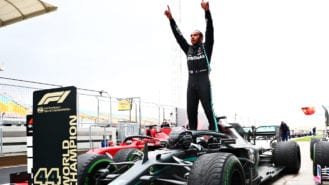 Both Ferraris had closed rapidly on Perez and it set up a memorable final lap between the trio. A wobble for Perez let Leclerc through at Turn 10 and it looked to be job done.

A lock-up into the final hairpin though on the damp side of the track sent Leclerc deep, and with just two corners of the race remaining he slipped from second to fourth as Perez and Vettel snuck through for a podium finish.

Having started sixth on the grid, Hamilton produced arguably his finest drive of the year to earn his seventh world title and 94th F1 victory.

It was a race full of tension with the next mistake possible from anywhere or anyone throughout the afternoon. Despite missing out on the sight of the 2020 cars at full speed around a great circuit, the Turkish GP put on a great show all the same.

When Lewis Hamilton was confirmed to have tested positive for Covid-19, the frenzy immediately began over who would be the one to replace him.

Mercedes eventually pickedGeorge Russell to fill the world champion’s boots. As exciting a prospect it was to see Mercedes’ potential future star go up against the man he could very well replace, expectations were not high within the team.

The outer-loop in Bahrain gave fans a taste of what F1 would be like without Hamilton on the grid. The pre-race theatrics set imaginations wild of what could be, but the Sunday night could not have been scripted.

Russell immediately underlined his credentials from the moment he turned out of the garage on Friday, ending up shy of pole by just 0.026sec. It was a brilliant effort in a car he had driven for the first time just 24 hours prior.

The lap one incident between Sergio Perez, Charles Leclerc and Max Verstappen that put the latter two out of the race dampened expectations of a great race, but it was just the start of an unpredicatable night.

Russell’s overtake on Bottas at the start set the tone between the Mercedes duo. He led the race comfortably through the pit stop phase with Bottas unable to get close.

Ironically, Russell’s Williams car was the cause of his downfall as Jack Aitken tapped his front wing off at the exit of the last corner, bringing out a safety car.

Mercedes uncharacteristically made the most crucial of mistakes at the vital moment. Miscommunication left Bottas stranded for half a minute without fresh tyres and put Russell back on track with the wrong ones, necessitating an extra stop to sort the mix-up.

A straightforward one-two had turned into a four-five with less than 20 laps to go. Perez, having been last of the remaining runners at the end of lap one now led the restart. 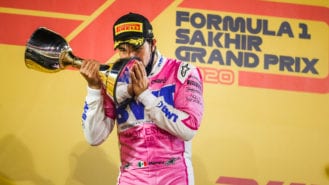 With Hamilton away, Perez has his day: F1 2020 Sakhir Grand Prix report

A Formula 1 race without Lewis Hamilton for the first time since 2006, and therefore without this season’s already-crowned drivers’ champion, but in his absence F1 still delivered something special.…

Russell pulled a sensational pass on Bottas around the outside of the dusty and narrow sector two sweeps. It was a move that may have had larger implications than just a swap of positions on track.

As Bottas faded down the order, Russell cleared Stroll and Ocon and was closing in on the lead he hadn’t looked like losing up until his team’s error. But it just wasn’t meant to be.

A puncture with nine laps to go required another stop and the chance of victory was gone. A cruel end to an impressive weekend, Russell’s agony played out for all to hear over his team radio. He recovered and earned the first F1 points of his career and despite missing out on the win, his reputation had soared.

Perez was a welcome winner, earning victory in his penultimate race in Formula 1, breaking the record for most starts without a victory with 190 before his moment on the top step.

Ocon clung on to second for his first-ever F1 podium and Stroll’s third place ensured Racing Point had its first double-podium finish before transforming into Aston Martin for 2021.