It’s rare that Formula 1 sheds tears for a driver whose endeavours have netted no more than a solitary 12th place during a three-season spell, but Timo Glock is a case apart.

The German first dabbled with F1 in 2004, as a 22-year-old, subbing for Jordan racer Giorgio Pantano and taking a fine seventh place on his race debut in Canada, just ahead of team-mate Nick Heidfeld. He reappeared for the final three races of the campaign, but with no full-time seat available for 2005 he switched to the US-based Champ Car series, finishing eighth in the final standings and earning the Rookie of the Year award.

He returned to Europe in 2006, to contest the GP2 Series, but results didn’t perk up until he joined iSport in the season’s second half. In Istanbul, he featured in a wonderful tussle with Lewis Hamilton as the Englishman recovered from an early spin. Hamilton had the quickest car – if memory serves, his ART team had tweaked gear ratios to suit the prevailing wind – and scythed past most rivals, but Glock remained resolute, refusing to yield and putting his car in places that compromised his rival. It was hard, clean and wonderful to watch. They remained as one for more than a lap before Hamilton finally dislodged him: racing as it was meant to be, in short.

That day they were mere millimetres apart, but within a few months they might as well have been on separate planets, Hamilton landing a McLaren seat while Glock stayed with iSport for an ultimately successful assault on the GP2 title.

More than three years after his F1 debut, he subsequently returned to the sport’s top table with Toyota. Over the next two seasons, he was rarely as quick as team-mate Jarno Trulli over a single lap – no shame in that – but there was no mistaking the racing spirit we’d seen in GP2: if you wanted somebody to roll up their sleeves and get stuck in, particularly in tricky conditions, Glock was a match for almost anybody. And off the track he was able to lead a remarkably normal life: after the 2009 Monaco GP, I bumped into him in a roadside pizzeria close to the principality, where he was relaxing with his girlfriend and others. The place was packed yet nobody pestered him, possibly because they didn’t know who he was. He had the privileges of being a Grand Prix driver without the potential drawbacks – an enviable cocktail.

Glock missed the final two races of 2009, after sustaining a leg injury during qualifying for the Japanese GP, but was poised to sign a Renault contract for the following season. That’s when John Booth invited him to consider Manor Grand Prix (later Virgin, now Marussia). The German was hooked and admitted he’d been lured by the fledgling team’s small size and no-nonsense approach; he hadn’t much cared for the committee mentality at Toyota and the new project reminded him of his time with iSport, a period of his career he’d adored. 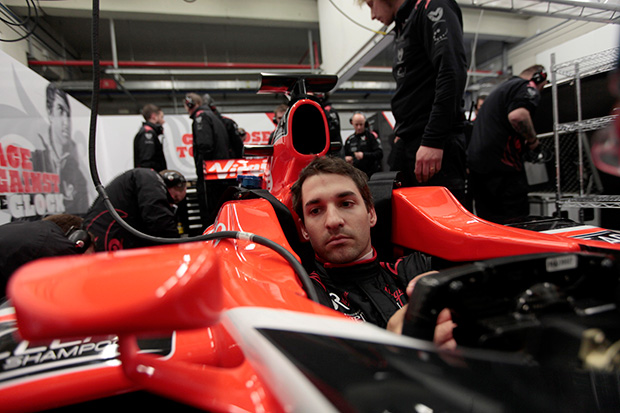 But the adventure has come to a premature conclusion due to what the team describes as the “difficult commercial landscape”, code for its inability to continue paying a salaried driver. Glock is now likely to race in the DTM, with BMW.

The past three years might not have fulfilled his hopes, but there were several brief, mid-race cameos when he capitalised on peculiar circumstance to put the car in places it had no right to be.

Such were the fruits of a decision based on noble intention rather than short-term gain, but that’s the essence of Timo Glock.