Fernando Alonso made an unruffled, predictably accomplished return to Formula 1 in the pre-season Bahrain tests last weekend, running on the second and third days to bank decent mileage in the Alpine A521 and set the second-fastest time on Saturday with over 60 laps.

Instead of his fractured jaw, which as he promised appeared not to cause him any bother, ‘body shaming’ of his new car appeared to be the biggest talking point when it came to the team formerly known as Renault.

The aesthetics of this F1 generation are hard to love at the best of times – but that air inlet and bulbous engine cover… Uncomplimentary comparisons to Ligier’s ‘teapot’ JS5 are a bit overboard, although similarities to the reduced post-1976 Spanish GP version, once the ungainly high-rise airboxes had been banned, are amusingly apt.

Compromising the centre of gravity to package cooling hardware higher up and away from amazingly waisted sidepods that make mid-’70s Keith Richards look chubby brings aero gains that make it worthwhile, apparently. For Alonso, looks won’t matter this season if the A521 allows him to express himself fully as we know he can. The jury remains out on that one.

But there’s another big question hanging over this team that I keep coming back to: just how are executive director Marcin Budkowski and ex-Suzuki MotoGP boss and new racing director Davide Brivio going to get on managing this team as a joint effort? 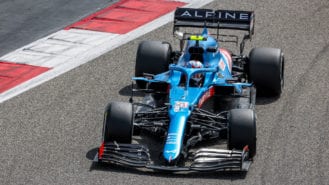 It’s not as if they have years of experience working together. Brivio is new to F1, too. Perhaps it’ll be fine and they’ll have a good handle on where each other’s responsibilities begin and end – but the set-up looks like a typical politically derived car manufacturer fudge, especially in the wake of Cyril Abiteboul’s departure.

Last week I stumbled across a non-F1 precedent set by another French manufacturer, when I found myself re-reading an interview I did for Motor Sport in 2012 with former Peugeot 908 LMP1 ace Nicolas Minassian.

The amiable, long-anglicised Frenchman is always good company and when I caught up with him at Silverstone Classic, where he relished the chance to drive a Peugeot 905 Group C car, he was happy to discuss aspects of his five years with the manufacturer, whom he’d just quit not long before it made a shock withdrawal from sports car racing almost on the eve of the new World Endurance Championship.

According to Minassian, there were clear reasons why the fast 908 only claimed a single Le Mans 24 Hours win, in 2009, despite often carrying a pace advantage over the Audis – and he pointed the finger directly at (mis)management.

“It was a shame how it ended,” Minassian told me. “Last winter, I put out a press release saying I was off, because they couldn’t offer me a contract. They said ‘Ah, don’t worry, Nic. We’re going to give you a car’. But I was fed up waiting, I lost my patience. And between Bruno Famin [former technical director and then boss of Peugeot Sport] and Olivier Quesnel [who ran Peugeot Sport during the 908 era]… Quesnel was never reachable on the phone, and Famin would tell you one thing, then Quesnel would tell you another. Both of them were thinking they were the boss.”

Two chiefs muddying the field? Oh dear. Renault isn’t about to ‘do a Peugeot’ with Alpine – is it? If it does, we’ll surely soon hear about it. Alonso isn’t a man with time to waste if internal politics begin to derail his comeback.