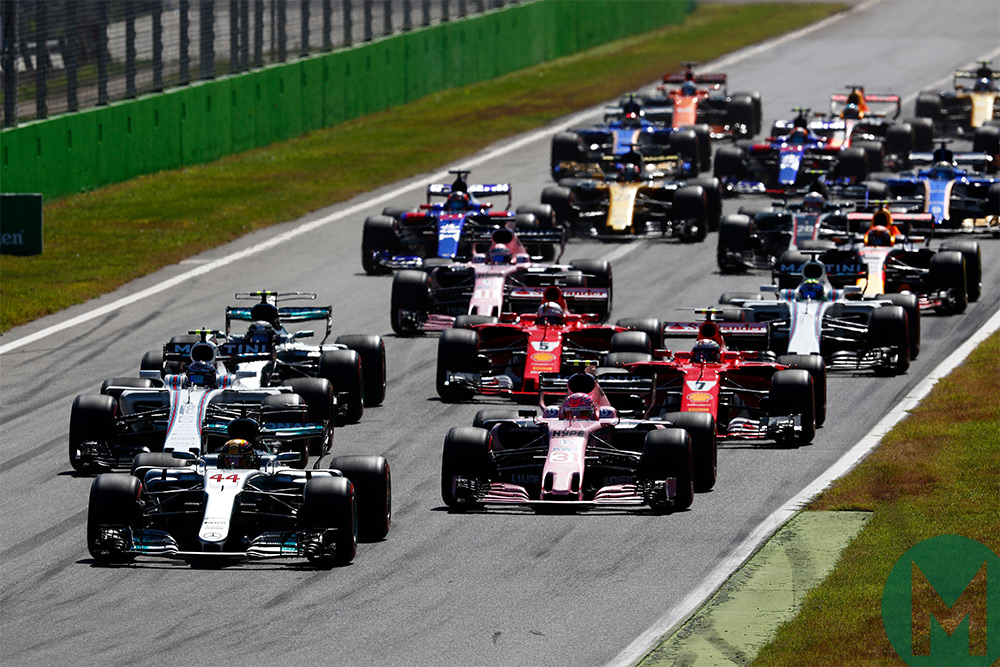 Essentially a rookie, Esteban Ocon was thrust into the Force India seat after spending half the 2016 season with Manor. The ever-reliable Force India VJM10 helped Ocon score points in all but two races, putting him above Carlos Sainz Jr and Nico Hulkenberg – both of whom narrowly missed out on the fifth spot in our vote. Sergio Pérez finished 13 points higher in the drivers’ championship, but Ocon did a stellar job of minimizing the gulf of experience between him and his established team-mate.

Ocon’s highest finishes of fifth, in the Spanish and Mexican Grands Prix, were exemplary, but it was in qualifying where Ocon proved he was close to Pérez’s pace with Pérez qualifying in an average of ninth place, compared to Ocon’s average position of 10th on the grid. An average qualifying gap of just 0.074sec shows just how close the pair was in 2017.

Low points for the 21-year-old Frenchman were shared by Pérez, as Force India was the master of its own downfall all too often. Scuffles in Azerbaijan, Belgium and a feud in Canada worried the outfit, but showed how closely matched its two drivers were once Ocon found his feet. The biggest worry for Force India will be the thought of a replacement, should Ocon move to Mercedes in the future.

Robbed by poor reliability more than anything, Max Verstappen shone consistently throughout the season. He outqualified counterpart Daniel Ricciardo 13 times in a tight qualifying battle, with the two separated by 0.128sec on average. The 20-year-old missed out on third in our top five by a single vote.

A brace of wins in 2017 at Sepang and Mexico City showed that the young driver, regularly heralded as a future world champion, is capable of dominating races. The 2017 Red Bull wasn’t up to scratch, and after seven retirements this season Verstappen’s patience was truly tested. But that win in Malaysia showed his perseverance was paying off, as he came from third on the grid to control the race; the second win in Mexico showed that Verstappen is more than capable of repeating that success in 2018.

Untamed aggression, as witnessed in Hungary where Verstappen forced his team-mate off going into Turn 2, may be a crease that needs ironing but it’s Verstappen’s aggression that has endeared him to many sitting in the grandstands. And that raw instinct to overtake and control races could pay dividends in 2018 – if the Red Bull challenger is up to the task.

A stand-out performer in 2016, Ricciardo’s 2017 was just as successful. Though Verstappen has caught up and overtaken Ricciardo in many respects, the 28-year-old Australian scored a career-high nine podiums and grabbed a single victory this season to finish fifth in the championship.

That victory in Azerbaijan wasn’t Ricciardo’s strongest performance. His defence of third place in Austria against an imposing Lewis Hamilton showed what Ricciardo is capable of, and a stunning fifth-place finish from 19th on the grid at Silverstone showed that, much like Verstappen, Ricciardo is still capable of bringing the Red Bull up from the back of the pack.

Most worrying for the shoe-swilling racer in 2018 will be his team-mate, and although he was 32 points ahead in the standings, Ricciardo may well finish behind Verstappen next season having lost the qualifying battle 7-13 in 2017.

The World Champion was handed the second-most votes by the Motor Sport team, and perhaps controversially does miss out on top spot. The four-time champion, who broke Michael Schumacher’s pole position record, faced an uphill battle against a seemingly resurgent Ferrari and overcame it in style with five wins in six races between the Belgian and USA Grands Prix.

Team-mate Valtteri Bottas was left behind this season, losing the qualifying battle 7-13, and 0.331sec behind his team-mate on average this season. Only Pierre Gasly and Brendon Hartley; Lance Stroll and Felipe Massa; and Nico Hulkenberg and Jolyon Palmer had bigger gaps in qualifying this season, showing just how far ahead of his counterpart Hamilton was.

Hamilton struggled when the Mercedes wouldn’t cooperate early on in the season, but he worked with those weaknesses and he, apart from in the nine Grands Prix he won, produced stunning performances in Spain and Great Britain. Ferrari’s performance showed that the Mercedes wasn’t consistently the best car, and Hamilton controlled the pace at times this season when he shouldn’t have.

With the most votes was Fernando Alonso, and with just 15 points this season at 15th in the championship, he seems an odd choice for top spot. However, Honda’s power unit prevented Alonso from getting anywhere not just in 2017, but for the last two seasons.

Outqualifying Stoffel Vandoorne 16-3 by an average margin of 0.319sec shows just how great a benchmark Alonso is. The first four races of 2017 were a write-off, but Alonso came back in Spain to qualify seventh. That lack of straight-line speed did little to prevent him from producing the fourth-fastest lap of the race, but the home crowd had to watch him fall back to 12th. In Hungary, Alonso took the fastest lap having qualified seventh and finished sixth, and points in Brazil and Abu Dhabi showed that Alonso’s talent vastly outweighed the car he was given.

The start of the Singapore Grand Prix denied us another coup from Alonso, but sparks of brilliance such as his battle with Hamilton in Mexico and constant harrying of Massa in Brazil more than made up for it. His cameo at the Indianapolis 500 showed the world why Alonso is so highly regarded, and his subsequent retirement from the race brought us all back down to earth all too quickly. A switch to Renault and a Daytona 24 Hours drive with United Autosports could re-ignite a talent too long hindered by hardware.