Toto Wolff has a new three-year deal as Mercedes F1 team principal, as it was announced INEOS has taken a one-third stake in the team.

The multinational chemicals company owned by Sir Jim Ratcliffe now has equal ownership of the 2020 championship-winning team alongside Wolff, who has increased his share from 30 per cent, and Daimler, which has sold a chunk of its 60 per cent holding.

INEOS announced a partnership between its top-level cycling team and Mercedes last year, followed by a five-year sponsorship deal thought to be worth $100m, at the beginning of 2020.

“I am pleased to begin this new chapter for the Mercedes-AMG Petronas F1 Team,” said Wolff. “This team is like a family for me.

“This new investment from INEOS confirms that the business case for Formula 1 teams is robust and sends an important signal of confidence in the sport after a challenging year.” 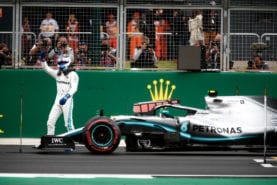 MPH: From Tyrrell to title dominance, the evolution of Mercedes F1

As we approach F1’s car launch week and ponder again if anyone can finally break Mercedes’ monopoly of the hybrid formula as it goes into its seventh season, it’s timely…

Ola Källenius, Chairman of Mercedes’ parent company, Daimler, said that the new ownership structure did not alter his firm’s interest in F1.

“We remain firmly committed to Formula 1, and the forthcoming cost cap along with the new shareholding structure put us in an even stronger position for continued success,” he said.

“With an even closer alignment to our Mercedes-AMG performance division beginning in 2021, and Toto’s continued leadership in the coming years, the future is bright for Mercedes-Benz in Formula 1.”

There has been much recent speculation over the bond between Mercedes and Ineos, with Eddie Jordan claiming Ineos would buy out Mercedes amid rumours that Wolff was to step down from his position.

The Mercedes press release indicates Wolff “will have the subsequent opportunity to transition to a new executive function within the organisation when he decides it is the right time to do so.”

During the 2020 season, Wolff has said he was “in a moment of reflection where F1 is heading to.”