Like so many of us, Toto Wolff couldn’t have foreseen the strange way the world would evolve this year, a situation that leaves him contemplating Lewis Hamilton’s achievements in front of a virtual backdrop via a Zoom interview. But a side effect is he’s physically alone with his thoughts.

Wolff sits in a room in the Mercedes motorhome reflecting on a level of dominance that he couldn’t even have dreamed of when he joined Hamilton at Mercedes in 2013.

Sebastian Vettel was about to take a fourth consecutive drivers’ championship, and Hamilton was only going to take a solitary win for Mercedes in his debut season for the team. Both looked like superstars, but one had the titles to match, and one didn’t.

“Many drivers think they are the sun and all of the planets revolve around them. This is an ingredient for failure.”

Hamilton soon added to his single championship with back-to-back successes as Mercedes took control of F1, but after losing out to Nico Rosberg in 2016 he was challenged from outside by the man he was trying to equal. Vettel had four titles, Hamilton three, but two years that could have gone either way eventually became resounding Hamilton victories.

“I think in the previous championships clearly Lewis made less mistakes than his competitors,” Wolff says. “That was definitely a contributing factor to his championship titles.”

But how did he end up at that level? There were times Hamilton looked vulnerable alongside Rosberg, but even though Valtteri Bottas clearly has immense speed, there now appear to be no weaknesses in Hamilton’s armour.

It all comes down to not only the environment Mercedes has provided, but – more importantly according to Wolff – the way Hamilton has positioned himself within it.

“I think the best fit is on the driver’s side: ability, the right work ethic, and to share some of the values that we have built up in the team,” Wolff says. “Being honest with each other, being loyal to each other, being transparent, being able to tell the brutal truths, even if it hurts.

“But if it’s for the benefit [of everyone] when it’s about improving and development this is what an organisation needs to have, and where Lewis has transformed over the years is that he’s become a real team player. You can hear how much he praises the team.”

Nobody was surprised at Hamilton’s choice of words after winning his seventh title in Istanbul. “Naturally I have to always start with saying such a huge thank you to all the guys who are here and who are back at the factory,” he said. “The journey we’ve been on is monumental.”

Hamilton always highlights the work being done by Mercedes after each of his now-record-breaking wins, to such an extent that he sounds like a stuck record. Some quarters of the press even joke ahead of an interview that it will be his default response, but for Wolff they are far from hollow words.

The Briton isn’t paying lip service to his team, he’s fully appreciating his place within it and just how overstating his own importance could be damaging.

“There’s no ‘i’ in the word team and that makes him clearly stand out. When I look around there are many drivers who clearly think that they are the sun and all of the planets revolve around them and this is a big, big misconception and is an ingredient for failure.”

But it’s tough to overstate Hamilton’s importance. Even though he does clearly have the best car, he extracts the maximum out of it with remarkable consistency, and shows himself to have a higher level to access than anyone who has driven alongside him.

In now matching the record number of drivers’ championships, Hamilton puts himself firmly in the middle of the conversation for the best ever, even if Wolff isn’t willing to pin his colours to the mast.

“It’s very difficult to judge who has been the greatest driver of all time because there are drivers who were exceptional and outstanding in their times. The one that stands out today is Lewis, and if you look at the pure figures it’s him.

The start of a winning partnership: Hamilton with the 2013 Mercedes W04

There is a similarity shared by those greats, and it’s an association with the team that provided the most dominant spell for them. Be it Mercedes, Lotus or McLaren, their names come hand-in-hand with images of them in certain cars.

Mercedes has that with Hamilton, and it’s an achievement not lost on Wolff.

Such is Mercedes’ dominance that opportunities for Hamilton to clearly remind the world of his sensational talent are often few and far between, but there was a specific moment back in 2018 that Wolff recalls fondly for multiple reasons. 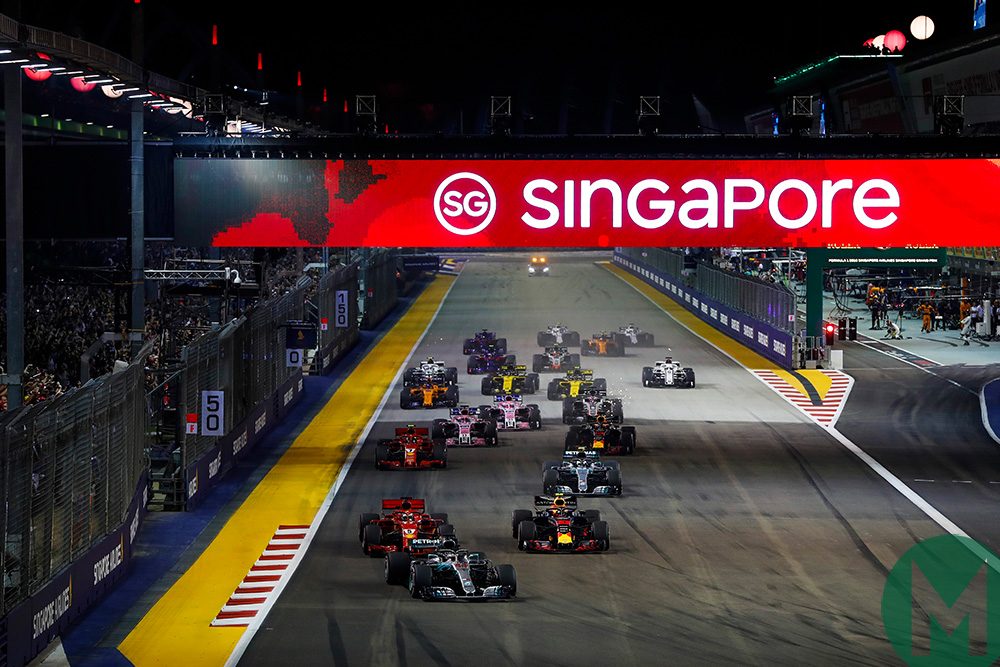 Lewis Hamilton and Mercedes peeled Sebastian Vettel and Ferrari apart again in the Singapore Formula 1 Grand Prix, just as at Monza. In terms of the championship, it’s difficult to…

Singapore had been something of a bogey track for Mercedes, and in 2017 they were only good enough for the third row as Ferrari and Red Bull held a clear advantage on the street circuit. All of the indications were it would be the same case a year later, so Wolff faced some strong questions about Hamilton’s preparations for the event.

“I think the week leading to Singapore [stands out] when we got a lot of criticism for allowing Lewis to basically travel once around the world to launch his Tommy Hilfiger collection – from the media and from our stakeholders – and then his lap in qualifying in Singapore, I’m not sure how far ahead of everyone he was…”

It was “only” 0.3sec but it came out of nowhere. Ferrari had been favourites, and Hamilton scraped through Q1 before the Mercedes came alive. The qualifying lap itself was close to perfection, a touch of magic that Wolff described at the time as “stardust”, but other than that couldn’t explain.

Like 2020, Wolff couldn’t have foreseen that lap. But he and Hamilton had learned how to create a world for themselves that would make it more likely.

It’s one they continue to rule.