Ahead of the latest British Grand Prix, Mercedes’ chief engineer Andrew Shovlin explains to us why Silverstone remains a challenge apart for Formula 1’s drivers and engineers 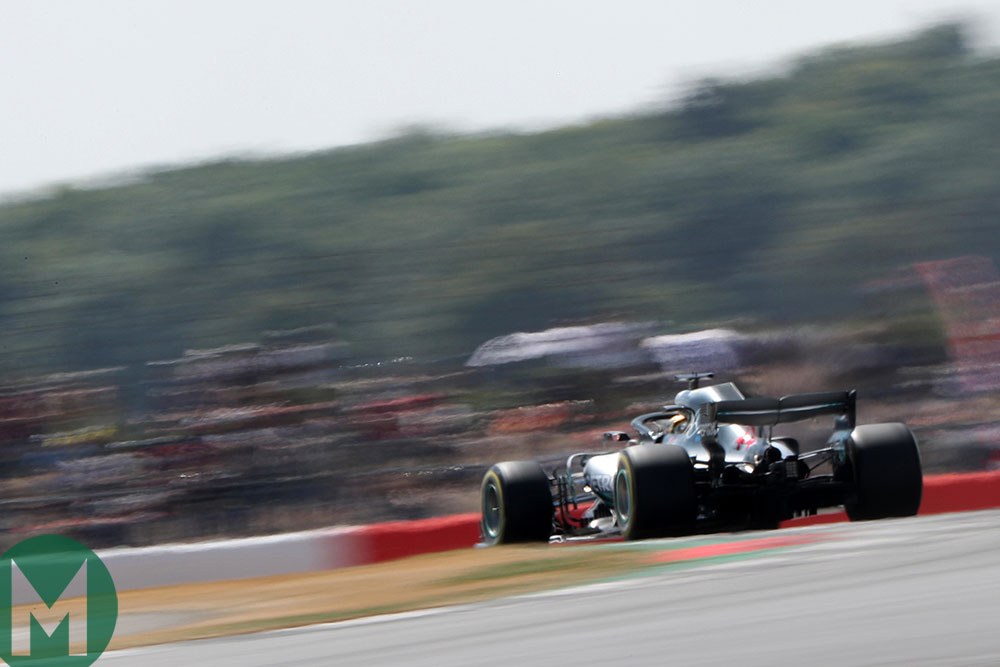 So, what’s special about Britain’s grand prix venue? Surely it’s just another, usually windy, converted airfield? While that’s technically true, Silverstone boasts a combination of challenges unlike most other circuits on the F1 calendar.

It’s also a timeless track. While the layout may have changed a few times throughout history, Silverstone has arguably come full circle back to the same challenge it originally was.

Teams with cars that are a bit of a handful definitely need the bravest drivers there. Drivers need to know the rear won’t give up on them

In its first configuration, using the airfield’s perimeter road from 1949, cars would typically use the two highest gears for every corner bar one. The track evolved in 1991 to give us the current Maggotts-Becketts-Chapel complex, which lowered speeds initially, until technical progress sped them up again.

Under F1’s current rules package of wide tyres, wider wings and cutting-edge suspension, most grand prix cars take an awful lot of the lap flat, just like they did 70 years ago. And that, Shovlin says, is part of what makes Silverstone such a tricky venue to set a car up for.

“Silverstone is the first circuit on the schedule with that amount of really high-speed corners, which have become flat as we’ve moved into this era of high-downforce, high-grip cars,” Shovlin said, speaking exclusively to Motor Sport.

“In qualifying, you’d expect turns 1-2 to be flat, Copse to be flat, Maggotts and the first part of Becketts to be flat. Sounds easy, but because they’re flat they’re nicely on that edge that it makes them a real handful at that speed.

“Take a corner like Copse, you have to turn in at exactly the right point and place the car exactly right on exit because it’s so fast if you’re not in the perfect place you’re hitting exit kerbs very hard and damaging things. A few of the corners at Silverstone are now over 5g, and there’s a lot of them, which makes them very serious corners for drivers and cars.” 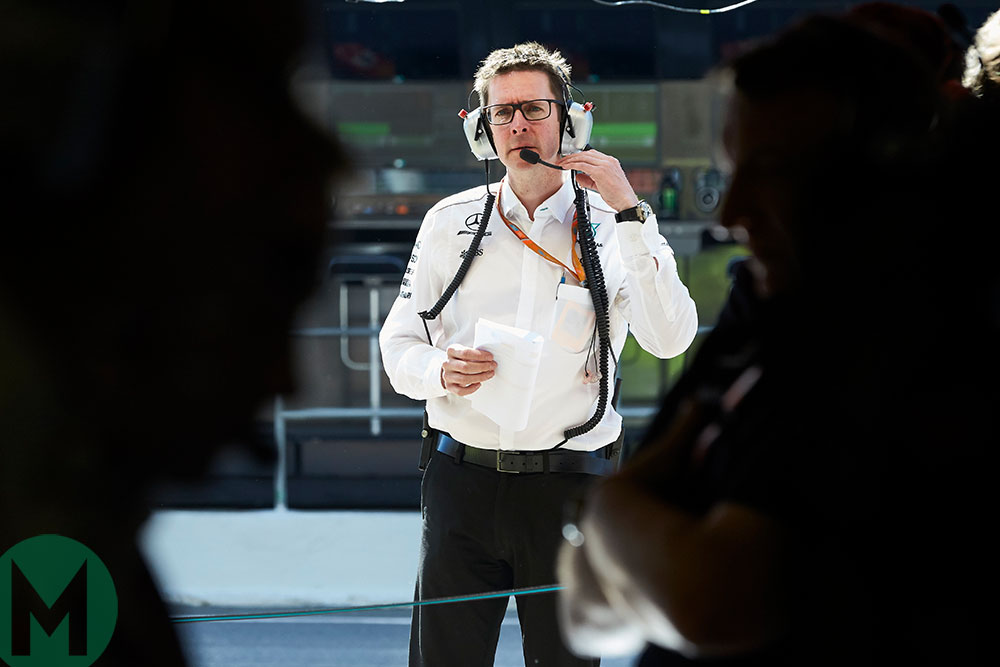 Of course, any circuit with that much cornering forces brings a lot of technical elements into play with both a car’s tyres and aerodynamics.

Shovlin says: “The vertical loads on the tyres are very high because they’re a function of the speed and speed is a feature of Silverstone. But it’s when you get the cornering forces that the tyres, particularly the outside front, has a really tough time around there because of the sheer amount of time it has vertical and lateral load on it.

“Silverstone is a track that rewards downforce and penalises drag, and it’s slightly unusual that so many teams run different options at the start of the weekend. You can run a low-downforce wing and a high-downforce one and broadly end up with similar lap times.

“That’s the sort of work you’re best to catch when you get on the track and you can fully appreciate what the downforce is doing to the tyres and how it’s hurting them or helping preserve them.

“You do find a range of wings on the cars on Friday and then people tend to converge in a similar opinion, but we’ll look at what Ferrari and Red Bull are doing, and it can change our opinion slightly, and vice versa I’m sure.”

Another factor unknown for this year will be the track surface. Following last year’s MotoGP washout, Silverstone elected to resurface the entire track for the second time in as many years after suffering drainage problems from the surface.

But while that badly afflicted the bike meeting, it also had a detrimental effect on the grand prix last year too with many drivers criticising the new surface for being overly bumpy.

“The surface last year took us all of Friday to come up with a solution to prevent the ride quality becoming one of the main factors in the car’s overall grip,” explains Shovlin.

“I think other teams actually did a better job than us on that. Those bumps do spoil the fast and flowing nature when the drivers are having their eyes rattled each lap.

“Sometimes the drivers were being shaken so much coming into the faster corners that they couldn’t actually see where the apex was or pick the braking point. Hopefully that’s better this year and it removes one dimension that’s become a problem.”

And, what does the high-speed nature of Silverstone demand from drivers?

“Teams with cars that are a bit of a handful definitely need the bravest drivers there,” adds Shovlin. “Drivers need to know that they can commit to those fast corners and the rear won’t give up on them.

“But for teams that have cars that are perhaps less aerodynamically stable, they’re the ones going into those corners knowing they have to commit and give it everything, but in the back of their mind they won’t know what the car will do when they turn in at speed. Silverstone does define the really good drivers from just the good ones.” 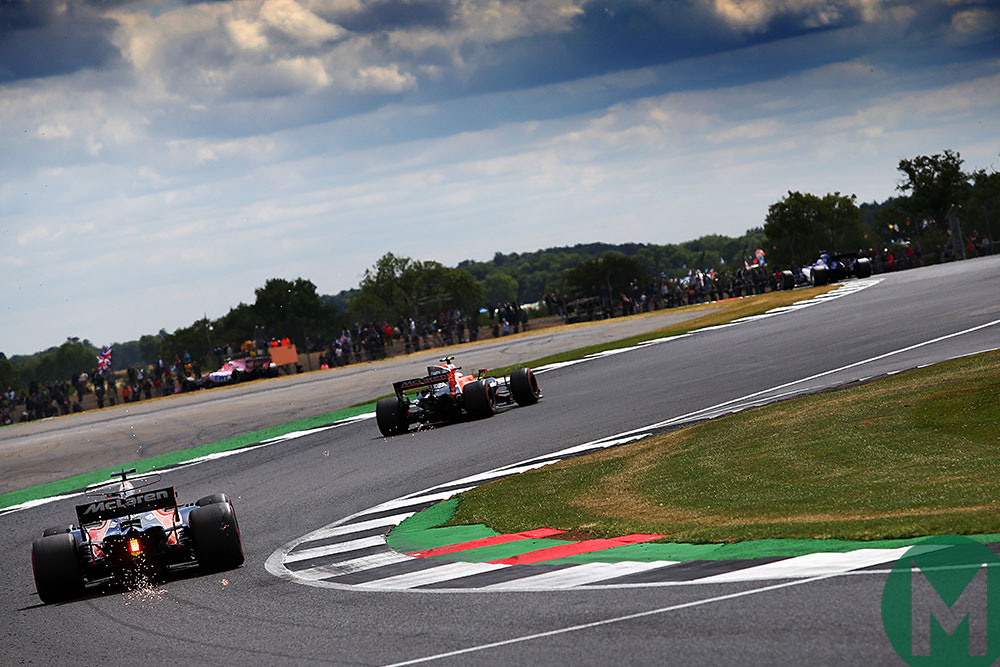 Mercedes has been on crushing form this year, winning eight of the first nine races this year. However, its vulnerability was shown last time out in Austria when Max Verstappen and Red Bull finally managed to keep a Silver Arrow off the podium top step.

Ferrari won at Silverstone last year, but before that, it was a total silver-wash. So, is Silverstone – the team’s local track – especially suited to Mercedes?

“We don’t think about any tracks as Mercedes-friendly or not,” says Shovlin.

“Instead we look at the tracks that have been good to us and try to work what characteristics of our car have helped us there, or we might look at the ones we’ve been bad at and work out what is it about our car that hasn’t worked there?

“At Silverstone we’d anticipate that Ferrari will be very close to us and Red Bull are always very good on the fast circuits. So, I think they’ll definitely be in the mix and we’re expecting it to be a close-run thing.

“Silverstone is just a lovely GP to go to and have a competitive car at because it’s a great track, and a historic track, with one of the best crowds you’ll ever get at a GP circuit.”