Max Verstappen will not be penalised for passing Lewis Hamilton under the safety car after stewards ruled that he had only moved slightly in front of his title rival for a very short period of time.

Mercedes lodged a protest over the incident which happened just before the final lap drama of the Abu Dhabi Grand Prix where Verstappen overtook Hamilton to claim the championship after an unconventional safety car period worked in the Dutchman’s favour.

Just before racing resumed at the safety car line, Verstappen pulled up alongside Hamilton and, amid the usual accelerations and decelerations, nudged his nose ahead at one point, in breach of F1’s sporting regulations.

A successful protest could have seen Verstappen handed a 5sec penalty, which would have given Hamilton the race win and the championship. 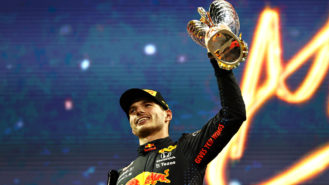 An emotional Max Verstappen joked that he would celebrate with "one drink" after clinching the 2021 Formula 1 drivers' championship in a dramatic final lap overtake of Lewis Hamilton. The…

In hearings attended by both teams, Red Bull argued that Verstappen hadn’t overtaken by moving his nose in front, “that both cars were on and off the throttle’ and that there were ‘a million precedents’ under safety car where cars had pulled alongside then moved back behind the car that was in front.”

The stewards said: Although car 33 [Verstappen] did at one stage, for a very short period of time, move slightly in front of car 44 [Hamilton], at a time when both cars where accelerating and braking, it moved back behind car 44 and it was not in front when the safety car period ended (i.e. at the line). Accordingly, the protest is dismissed.”

Mercedes lost its protest fee of €2000 but can appeal against the decision.

It has also protested the restart procedure after the safety car, which is still being considered.