Valtteri Bottas was third, 0.4sec behind with the Red Bull of Sergio Perez in fourth.

All cars headed out early in sunny conditions, the drivers eager to get track time in what is set to be a wet weekend in Styria.

Max Verstappen went quickest on the medium tyres with a 1min 06.581sec, Lewis Hamilton behind him on 1min 07.056sec.

Pierre Gasly slotted in between them with a 1min 06.640sec, with Sergio Perez 0.16sec behind him and Yuki Tsunoda a further 0.06sec back.

Robert Kubica, replacing Kimi Räikkönen at Alfa Romeo for FP1, had an early spin on his first flying lap as he set a time only faster than Valtteri Bottas, who was slowest at that point.

Turn 10 was an issue for drivers, as Hamilton, Gasly and Verstappen all had laps deleted for exceeding track limits, before Carlos Sainz spun at Turn One and ended up stationary at the end of the pit exit.

Lewis Hamilton bolted on the soft tyre and went fastest as the session approached the halfway mark, setting a 1min 06.390sec, but this was soon bettered by team-mate Bottas who posted time 0.004sec quicker.

Half a tenth back was now Tsunoda, who was also sampling the soft compound, as Antonio Giovinazzi impressed for Alfa Romeo with a lap-time 0.282sec off the quickest tour.

Gasly then went faster as drivers pushed towards the 1min 05sec, but it was Verstappen who broke through with a 1min 05.910sec – this would ultimately end as best time of the session.

Perez dipped a left rear wheel on the exit of Turn Four and span, as the Mexican struggled to set a fast time on the soft compound.

Drivers continued to lay down the laps with the threat of rain looming for FP2. Fernando Alonso looked ever more comfortable in the Alpine as he set a 1min 06.519sec to go sixth-fastest, with team-mate Esteban Ocon half a tenth behind.

Quick times were rare in the second half of the session as both Verstappen and Hamilton went for long runs on their medium tyres.

Lando Norris attempted to set some hot laps towards the end, but saw three flying laps in a row deleted due to track limits.

Verstappen ended the session fastest, dark clouds shifting over the Styrian mountains as teams take a break before FP2 commences at 2pm. 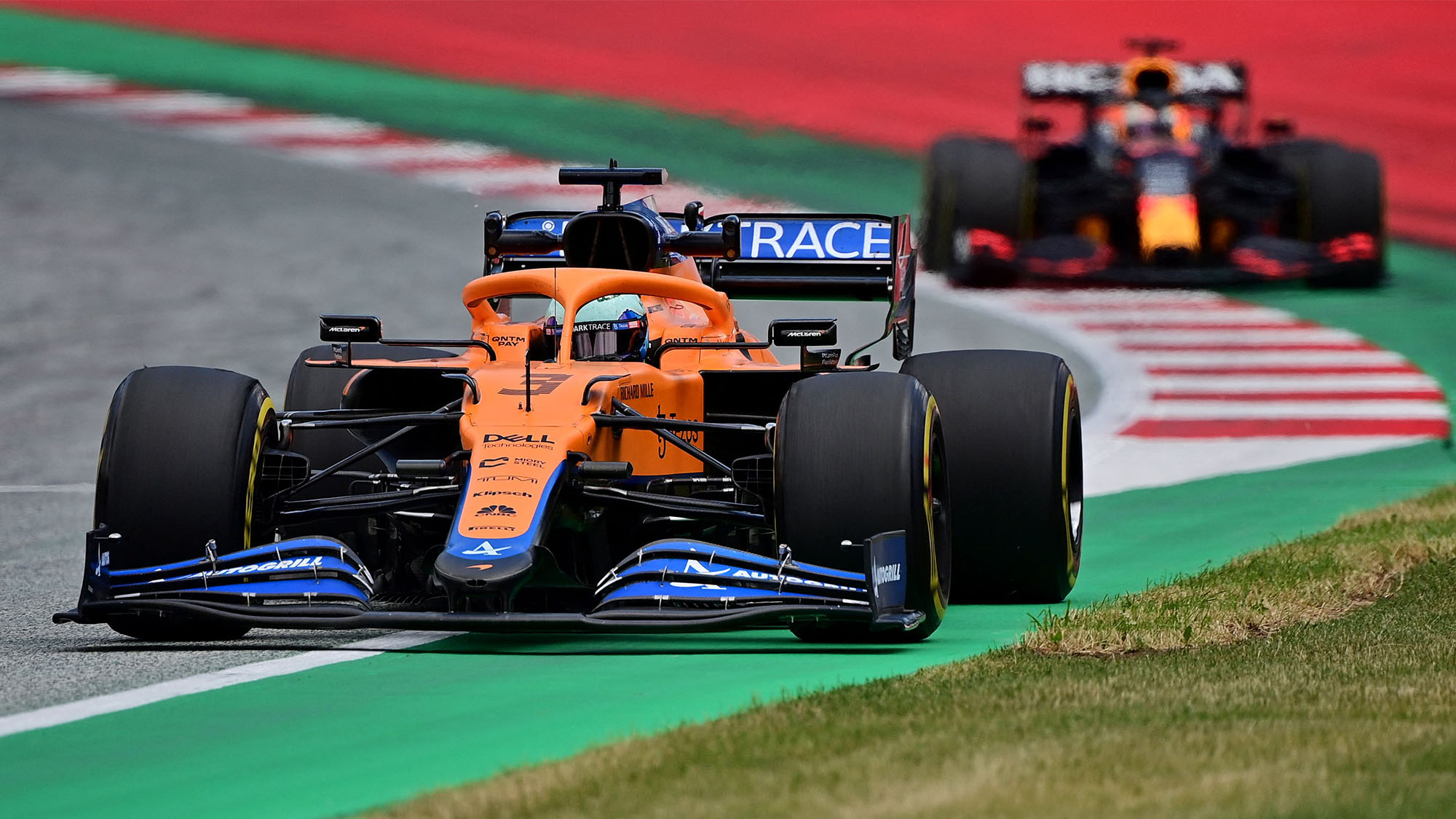 With the threat of rain still hanging over the Red Bull Ring, teams again hit the track early in a bid to rack up laps.

Max Verstappen went fastest early on once more with a 1min 6.643sec, before being bested by Lewis Hamilton by almost three tenths. Fernando Alonso was 0.450sec behind them in third, before Sergio Perez went a fraction quicker than the Spaniard

As spots of rain began to fall, drivers started to lose grip and go off at Turn Three, Hamilton locking his right front hard tyre as he ran wide.

Carlos Sainz then span off at Turn Four in an echo of Perez’s FP1 off, raking gravel onto the track as he came back on.

Under-pressure Valtteri Bottas has looked reasonably strong so far in Styria, setting a time just less than a tenth off Verstappen as the session approached the quarter-way mark.

Teams then elected to do qualifying laps in case the rain rolled in proper. Lance Stroll hit the top of the timesheets 1min 06.079sec, before Sebastian Vettel immediately went going 0.15sec faster. Vettel was on medium tyres whilst all those around him were on softs.

Hamilton went for a qualifying run to dip below the 1min 05.8sec, then was immediately outpaced by Esteban Ocon by 0.006sec.

The defending champion also had a fastest lap deleted while Verstappen continued to fire in hot laps as he posted a 1min 05.412sec to go quickest.

Daniel Ricciardo, starting to look more at home in his McLaren MCL35M, went second fastest, 3 tenths off the Red Bull.

Pierre Gasly spent the session in the garage as his team fixed an issue on his AlphaTauri, whilst team-mate Yuki Tsunoda complained of gear selection issues.

Drivers settled into race runs in the second half of the session, but Bottas was struggling to keep things under control.

Bottas’s session started to go awry with ten minutes to go. Leaving the pit box the Finn span before he’d barely cleared his own mechanics  – light drizzle looked to have reduced grip on the pitlane paint, and the neighbouring McLaren pit crew had to help push the backwards Mercedes out of trouble.

Bottas would end the session down in 12th place, in between the Ferraris of Sainz and Leclerc.

Verstappen, who ended up as fastest overall at the end of FP2, also had strong race pace, consistently setting 1min 09sec on his race simulation run.

Max Verstappen lands P1 for the second time on Friday

Who impressed you most in FP2? 🤔#StyrianGP 🇦🇹 #F1 pic.twitter.com/zL5OsUEE9X 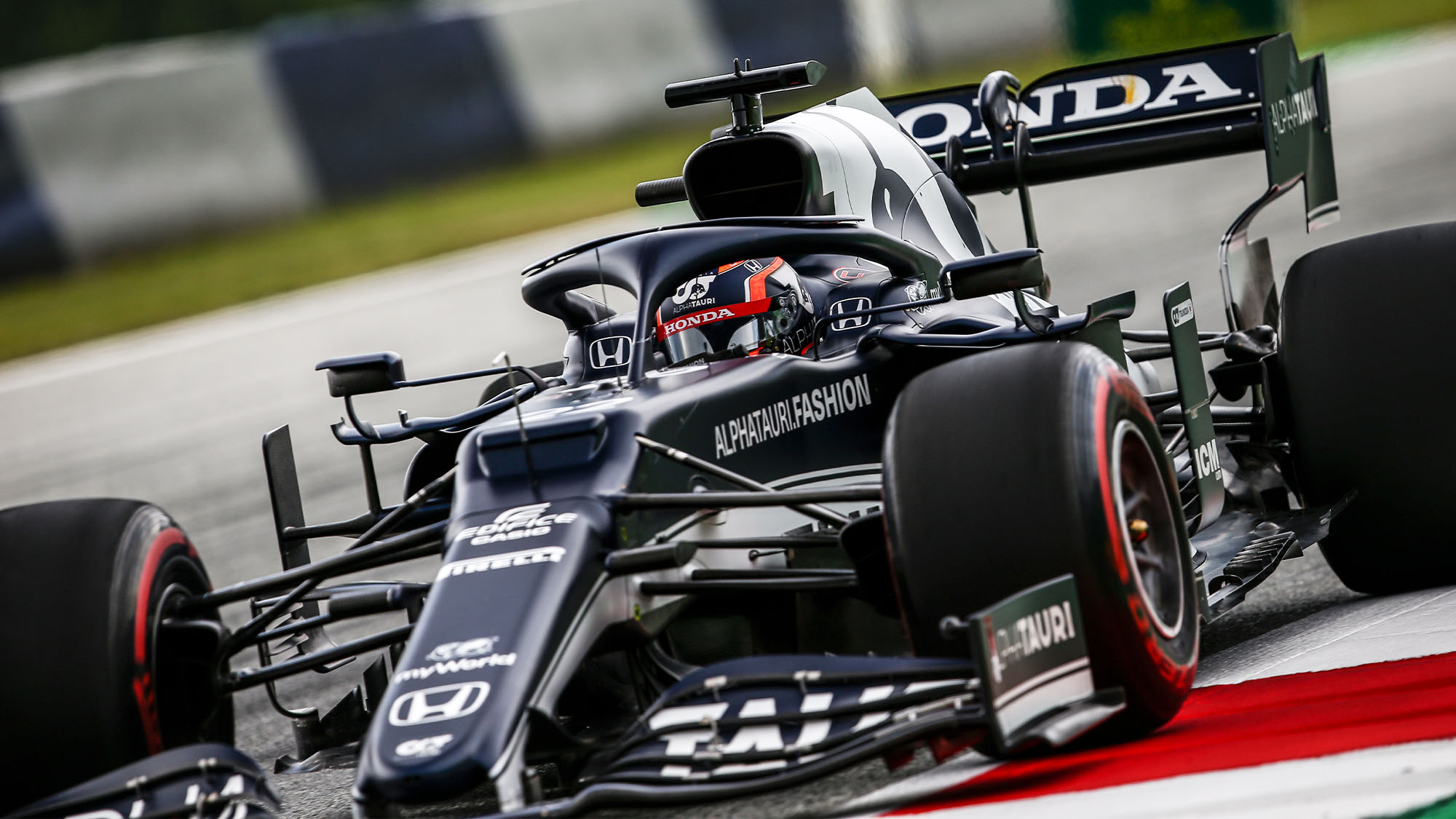 The early action wasn’t quite as frenzied as in the previous two sessions, Pierre Gasly setting an installation lap whilst the two Haas cars did hard tyre runs.

Both Alpines and Kimi Räikkönen began to trade times in high 1min 06s, but all had various laps deleted due to exceeding track limits.

As more cars headed out, Valtteri Bottas wanted to make up for his poor pitlane showing yesterday with a 1min 06.212sec which put him top the timing screens.

However this was soon bested by Max Verstappen, who went almost six tenths faster.

Nikita Mazepin managed to spin out of the first turn as the session reached the halfway mark, returning from the inisde grass in a mistake similar to Carlos Sainz yesterday.

Verstappen was the first man to break the 1min 04s, breaking in by 0.029sec, with Hamilton four tenths back and Gasly another three tenths.

McLaren’s Norris took a while to show his hand, but with 15 minutes he went fourth with a 1min 05.228sec – but this was then deleted due to a track limits infringement.

Therefore promoted to fourth was Charles Leclerc, who set a time of 1min 05.340sec.

Whilst this was all happening, Hamilton significantly lowered the lap-time with a 1min 04.369sec, 0.4sec ahead of Bottas in second.

The fast laps were flying in – Mick Schumacher posted an impressive time good enough for 16th, 1min 05.992, whilst Gasly went fourth with a 1min 05.333sec.

With 5 minutes to go, Verstappen closed to within two tenths of Hamilton, but the Dutchman was compromised by traffic in the first sector, costing him exactly that amount of time.

Verstappen attempted to go faster at the death, but had a slightly faster time deleted due to track limits.

Hamilton therefore ended up fastest by 0.2sec from the Red Bull and 0.4sec ahead of Bottas, with Perez fourth.