Max Verstappen converted his pole position to victory at the United States Grand Prix but the afternoon was nowhere near as straightforward as the result suggests.

The championship leader lost out to Lewis Hamilton, who started alongside him, when the lights went out. His view of the open track was quickly replaced by that of a Mercedes rear wing.

Red Bull decided to gamble, pitting Verstappen early to ensure that his pace on new tyres took him ahead of Hamilton when the Mercedes driver stopped.

But it meant that the reigning champion had much fresher tyres at the end of the race, and, in trademark fashion, Hamilton hunted Verstappen down, closing to within a second as the chequered flag approached.

It wasn’t quite enough to prevent Verstappen from extending his lead in the title race, and Mercedes lost out too in the constructors’ battle as Sergio Perez finished third.

Behind the leaders, Ferrari had the edge on McLaren, with Carlos Sainz having to fight off both simultaneously, while Fernando Alonso got involved in a spat with both Alfa Romeos — before retiring.

Here’s how the race played out. 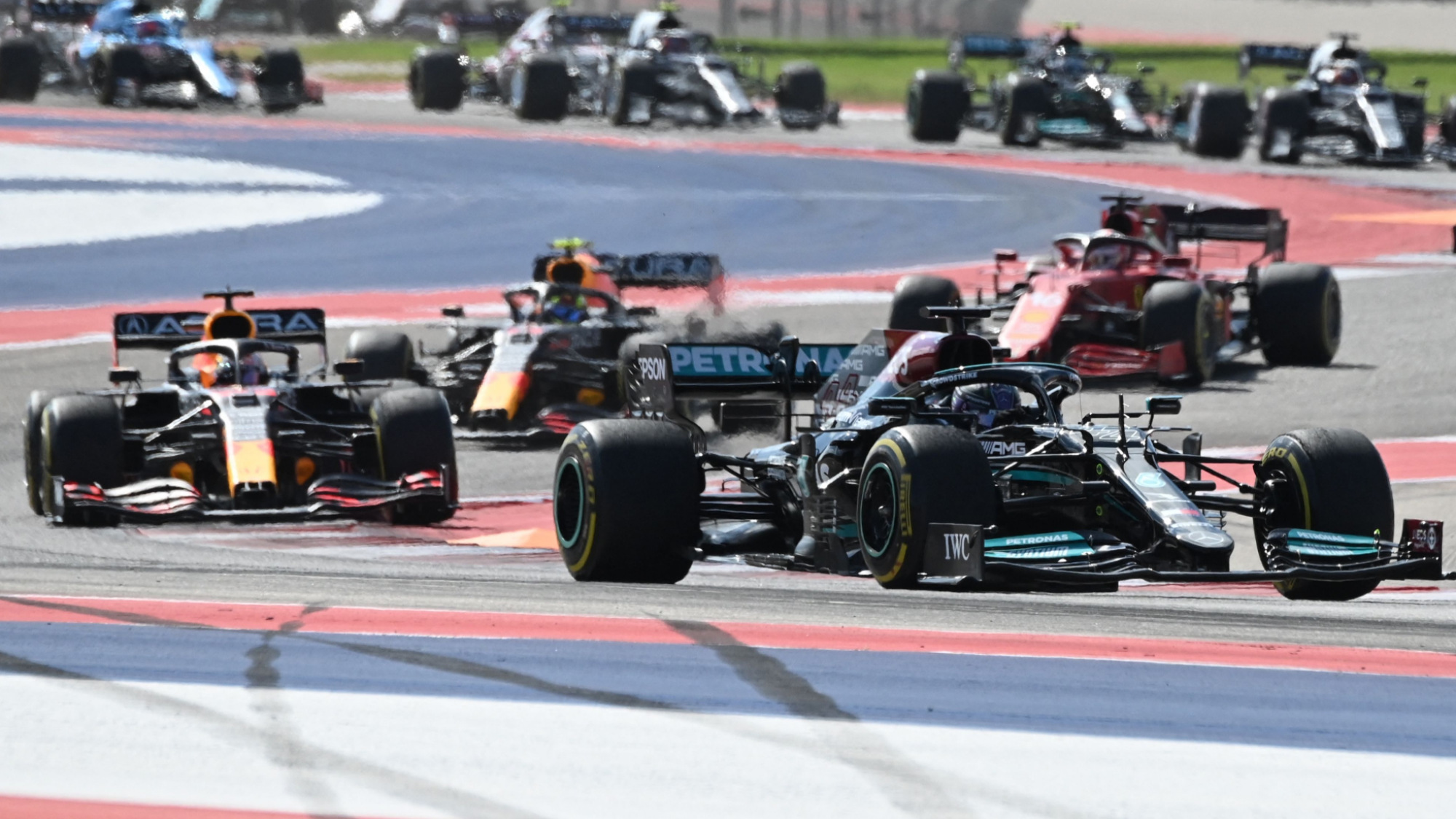 Lewis Hamilton led from the start of the race

Verstappen’s hard-won pole position was lost the moment that the lights went out, as Lewis Hamilton charged forward, pulling level with the Dutchman on the approach to Turn 1.

There was nothing Verstappen, on the outside, could do as Hamilton judged his braking point perfectly and edged his title rival off track on the outside, exiting the corner to lead lap 1.

It gave Sergio Perez a chance for a run on Hamilton through Turn 2 but as soon as it was clear that the Mexican had no hope of taking the lead, he slowed to allow his team-mate into second.

Behind, Lance Stroll was spun round by Nicholas Latifi at Turn 1, the pair dropping to the back as a result.

Further into the first lap, Daniel Ricciardo made a move to pass the soft-tyred Sainz for sixth on the outside approaching Turn 12, while his team-mate Norris tried a simultaneous move on the inside, which could have seen him audaciously pass both cars.

Sainz defended against Ricciardo, but was alongside Norris in the corner and ran wide off the track, maintaining enough momentum to edge ahead of the British driver and push him to the outside of the following corner, which saw him drop behind Ricciardo again.

Sainz then let Ricciardo through. He was later told to let Norris through too, but told his team that he thought the McLaren he had allowed past was that of Norris. He failed to let the second McLaren through.

Bottas dropped to tenth at the start but was fighting with Tsunoda for eighth at Turn 1 on lap 2. Verstappen said that Hamilton was sliding a lot, as the Red Bull driver set the fastest lap of the race so far.

Esteban Ocon was the first in the pits to change his nose and switch from medium to hard tyres at the end of lap 3, after being swiped by Antonio Giovinazzi.

Latifi stopped at the end of lap 5 for a new front wing, following his contact with Stoll and almost caused a repeat of the same incident as he exited the pits – this time with new nose compatriot Ocon, who dived up the outside into Turn 1.

Ahead, Lewis Hamilton radioed in that Verstappen was quicker than him, despite holding the fastest lap of the race at the time.

Fernando Alonso was the first to make a planned stop at the end of lap 7, pitting from 15th in an effort to undercut Sebastian Vettel ahead.

Max Verstappen said he had better pace than Hamilton but, blocked by the Mercedes, he pitted at the end of lap 10; a 2.9sec stop putting him put fifth behind Ricciardo.

Norris, in the second McLaren, pitted too, falling to 11th, behind the Aston Martins of Vettel and Stroll. It took little time for Verstappen to pass Ricciardo on his fresh hard tyres, going past on lap 11. 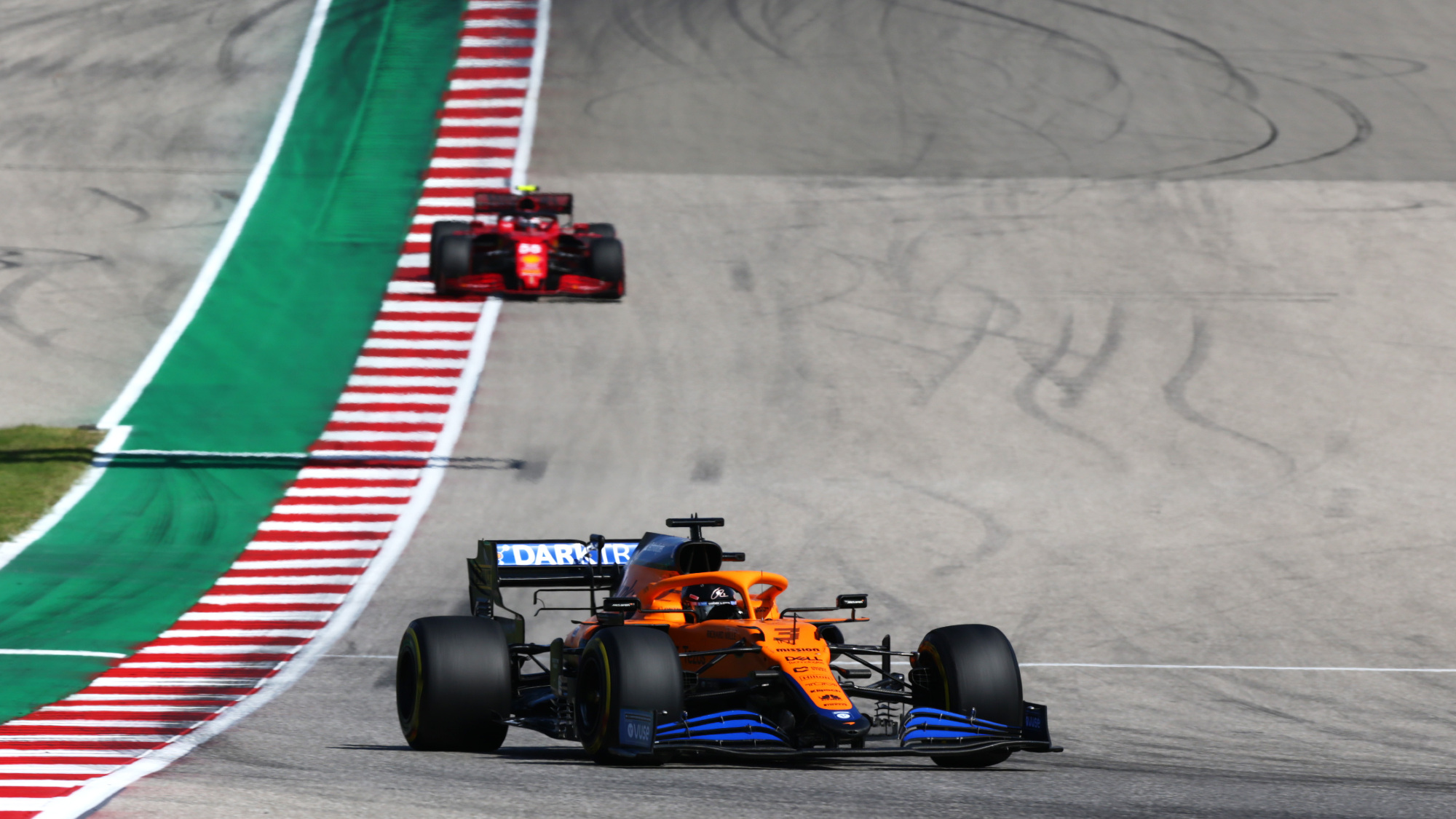 Lap 13 saw Perez pit from second, followed by Charles Leclerc from third, returning to the track third and fifth respectively, split by Bottas.

Hamilton pitted at the end of lap 13, but his 2.8sec stop wasn’t enough to prevent an overwhelming Verstappen undercut: the Mercedes ending up 6.7sec behind the Red Bull and 5sec ahead of Perez.

Leclerc was 20sec behind the leader, followed by Bottas, trailing by 23sec, who had not yet stopped.

Pierre Gasly slowed to a trundle on lap 15, complaining of rear suspension trouble and rolled into retirement.

Bottas pitted at the end of lap 15; his 2.7sec stop putting him 11th, ahead of Antonio Giovinazzi and the battling pair of world champions, Kimi Räikkönen and Fernando Alonso who clashed in Turn 1 — Räikkönen passing the Alpine on the outside, just after being pushed off track by Alonso, but no investigation was thought necessary.

Stroll stopped from 10th soon after being passed by Valtteri Bottas for ninth on lap 18.

Lap 20 brought Bottas past Yuki Tsunoda. Alonso managed to pass an Alfa Romeo on lap 20; pulling alongside Giovinazzi but then wildly overshooting Turn 12, running wide and then returning to the track to take the place.

The improbable manoeuvre appeared to be linked to the previous incident with Räikkönen ‚ now running ahead of Giovinazzi — and a radio broadcast between Alan Permane, Alpine’s sporting director and race director Michael Masi confirmed it — Permane asking if it was now permitted for cars to pass while off track on the outside of a corner. Masi said that this wasn’t the case.

Alonso was then told by the team that he had to hand back the place to Giovinazzi.

At the front, Verstappen led from Hamilton by 4.4sec on lap 25, with Perez 9.5sec further back and Leclerc 11.1sec behind the Mexican.

Alonso had another go at Giovinazzi, up the inside of Turn 1 – the result once again was an Alfa off the track. Giovinazzi held on to the position through the subsequent series of corners, but eventually let Alonso past.

Lap 26 saw the back-of-the-grid starters George Russell and Sebastian Vettel fighting for 13th; the Aston Martin driver managing to move past the Williams and on to the rear wing of Giovinazzi.

Hamilton had closed the gap to Verstappen to 2.8sec by lap 27; his fresher rubber moving him closer to Verstappen, but the times weren’t scintillating: Verstappen’s 1min 40.102sec fastest lap, set on the 13th lap still stood. Perez had dropped to 14sec behind Hamilton.

A Virtual Safety Car was imposed for barely 20sec on lap 28 as a marshal recovered some debris on track. 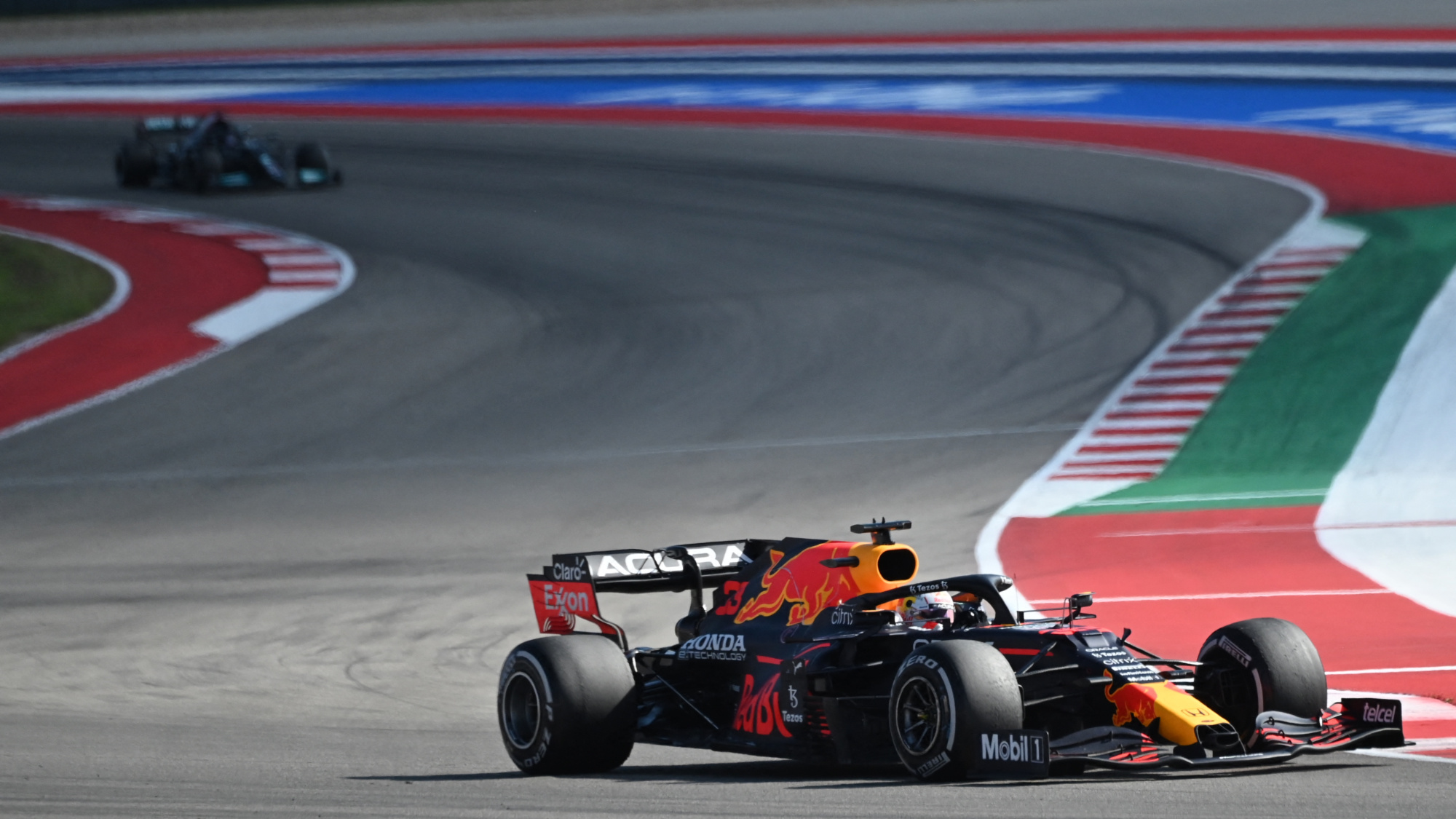 An early stop put Verstappen back in the lead, but left him vulnerable to fresher-tyred Hamilton

Verstappen made his second stop at the end of lap 29, emerging third, 1.7sec behind Perez who quickly let his team-mate through. Sainz made a stop too from sixth, coming out in eighth.

Hamilton was told he’d be extending this stint by six laps and immediately set the fastest lap of the race.

Perez pitted at the end of lap 30, followed by the McLarens of Ricciardo and Norris, the double-stack stop hoping to capitalise on Sainz’s slow stop. Ricciardo stayed ahead of the Ferrari, but Norris remained behind, running eighth on lap 32.

Leclerc pitted at the end of lap 32, emerging fourth and just ahead of Bottas — who was still to stop.

On lap 34, Mercedes told Hamilton the team was considering extending his stint by another lap, as Verstappen gradually moved closer — 15.3sec behind with his stop in hand, but tyres growing older by the lap.

Bottas came in for new tyres at the end of lap 34, coming out 7th between Sainz and Norris. Further back, Tsunoda made it into the top ten with a pass on Stroll.

The pitcrew were out for Hamilton at the end of lap 37, delivering a 2.4sec stop that put the reigning champion out in second, 7.8sec behind Verstappen on rubber that was 8 laps younger.

By lap 41, that gap was down to 6.5sec and was 5sec at the end of lap 42, when Esteban Ocon was pulled out of the race with an undisclosed issue.

Hamilton had Verstappen in sight on lap 43 thanks to the Ducthman’s lengthy attempts to lap Yuki Tsunoda and Kimi Räikkönen who was given the black and white flag for his reticence to move over.

Sainz and Ricciardo nudged each other in a puff of tyre smoke as the Ferrari driver tried to pass the McLaren on the outside for fifth. It got a bit “dirty” according to Sainz, who blamed it on Ricciardo.

Lap 46 saw Valtteri Bottas moved to within a second of Carlos Sainz, whose front wing was damaged in the Ricciardo incident, but there was no way past for the Finn. 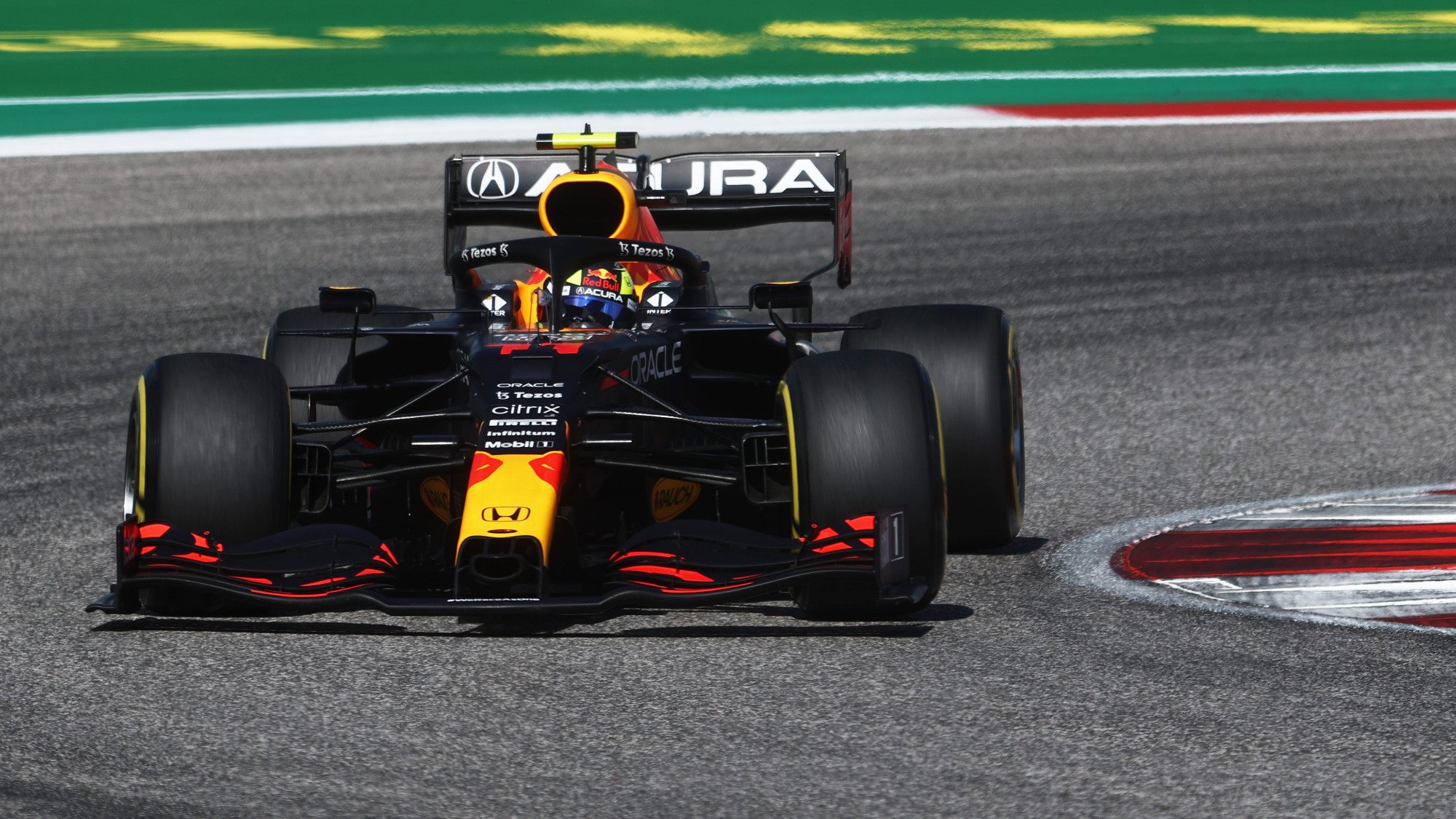 Come lap 51, Hamilton, was 1.5sec behind Verstappen. Alonso’s one-man Alfa battle ended on the same lap as he joined team-mate Ocon in retiring his Alpine.

Verstappen extended the gap to 1.8sec by lap 53. Räikkonen went off from 10th, promoting Sebastian Vettel to the points, while Bottas continued to attack Sainz in the hope of sixth place.

Hamilton launched his final attack on lap 54, drawing to within a second of the lead Red Bull a lap later, as the pair approached Mick Schumacher. Verstappen pleaded over the the radio to get the backmarker Haas out of the way and Schumacher obliged, giving Verstappen DRS down the pit straight just as Hamilton was just out of range to activate drag reduction himself.

Bottas made it past Sainz on lap 55, as his team-mate continued to chase down his prey. But Hamilton never got a chance to pull alongside, Verstappen maintaining a buffer right to the flag.