Max Verstappen took a crucial victory at a canter in Mexico as Red Bull’s pace told on Sunday.

His victory put him equal with Jim Clark on three Mexican GP wins and he extended his championship lead to 19 points over Lewis Hamilton.

The Mercedes driver was stuck driving a defensive race with the Dutchman so far out in front. Home hero Sergio Perez gave a great pursuit in the second stint but couldn’t find a route through to second by the end.

Here is how a pivotal afternoon in the 2021 championship race unfolded in Mexico.

The flares were lit along with everyone’s anticipation as the grid filtered round the final corner to form up on the grid.

Mercedes was unimpressed with the lack of urgency from Alfa Romeo and the rest of the drivers at the back to fill their grid spots.

The front row got the better race start with Bottas and Hamilton even on launch but Verstappen got the slipstream from the polesitter and he surged around the outside to claim the lead at Turn 1.

The Finn was the big loser as he was tagged around by Daniel Ricciardo and spun to the back of the pack. They weren’t the only drivers in the wars. Yuki Tsunoda was beached at Turn 2. Mick Schumacher pulled over several hundred meters further along the track and the safety car was deployed.

Bottas and Ricciardo were in for hard tyres at the end of lap 1 with the top 10 now reading: Verstappen, Hamilton, Perez, Gasly, Leclerc, Giovinazzi, Sainz, Vettel, Russell and Räikkönen. 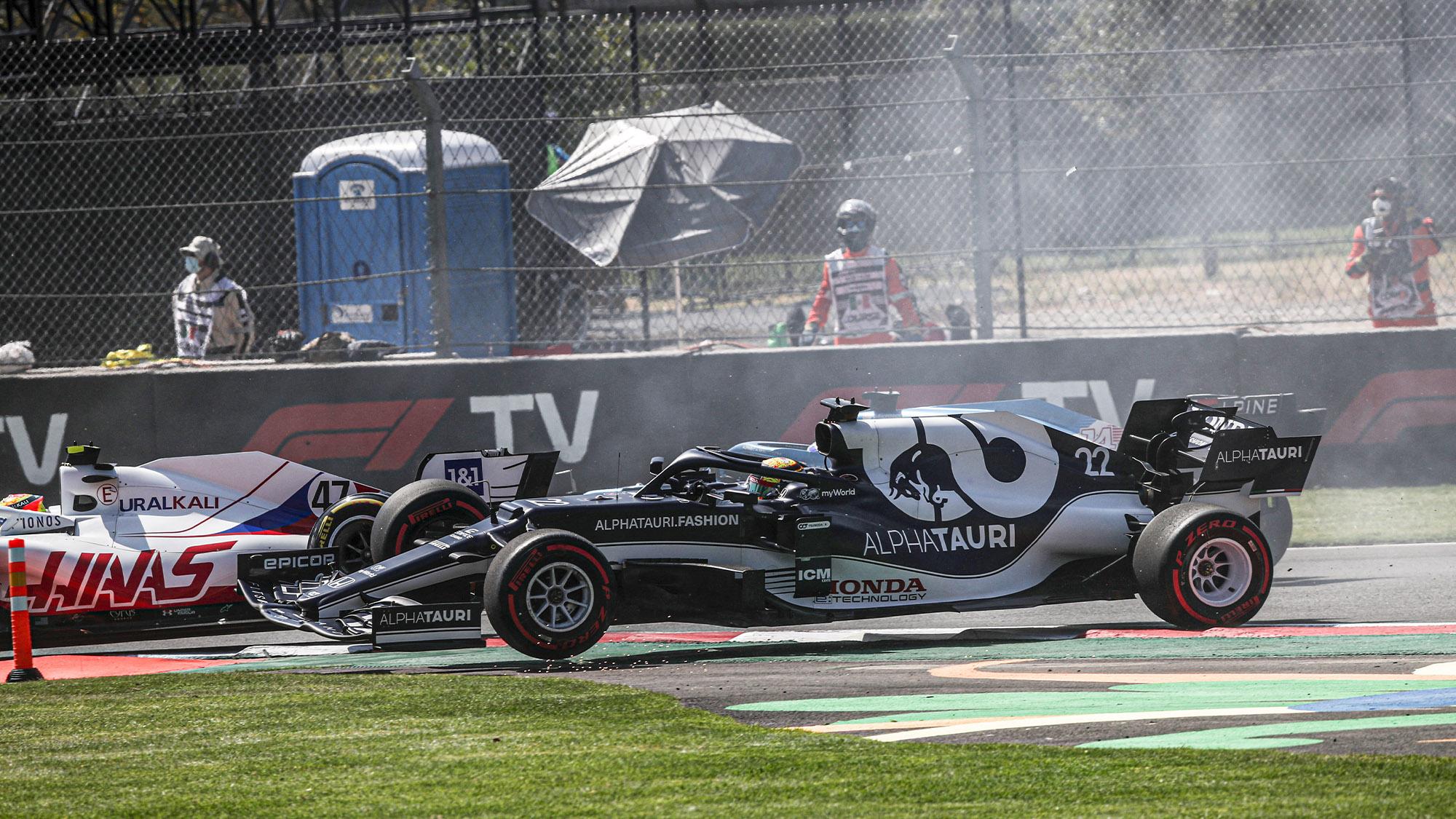 Tsunoda crashes out at the start of the race

The safety car was withdrawn on lap 4 and Verstappen pulled the pin in the middle of the stadium section. It was enough to leave the Mercedes well behind down the straight.

Giovinazzi lost sixth to Sainz but the rest of the field held station on the restart. Lance Stroll had been poised to take position from Esteban Ocon but missed his braking for Turn 4 and cut across the grass with no positional gain.

Opening lap 8 and Verstappen’s lead was up to 2.7sec over Hamilton who admitted over team radio that the leader was quick. Gianpiero Lambiase was quick to remind his driver not to take the life out of his tyres too quickly in the opening stint.

Räikkönen had a look at Russell one lap earlier but took ninth position from Russell at T1 on lap 9.

Fernando Alonso was by the Williams the next lap, taking the outside line at Turn 1 and securing the place at Turn 2 by seizing the inside from Russell.

Ferrari was running in a quiet fifth and sixth place but Sainz was keen to move on towards the top four. He informed the team he was being held up on lap 11 by Leclerc ahead of him.

Latifi and Stroll were the first drivers to pit under racing conditions on laps 13 and 14 respectively and the two were fighting for the same bit of track after the Aston Martin driver rejoined. Stroll won out in the all-Canadian battle to hold 17th place.

Hamilton had dropped back to 5sec behind Verstappen and reported that his tyres were “falling off massively” in his efforts to keep up with his title rival. Perez was more than able to keep in touch with the Mercedes and said he was coping just fine with the medium compound tyres. The gap was down to under two seconds by lap 16. 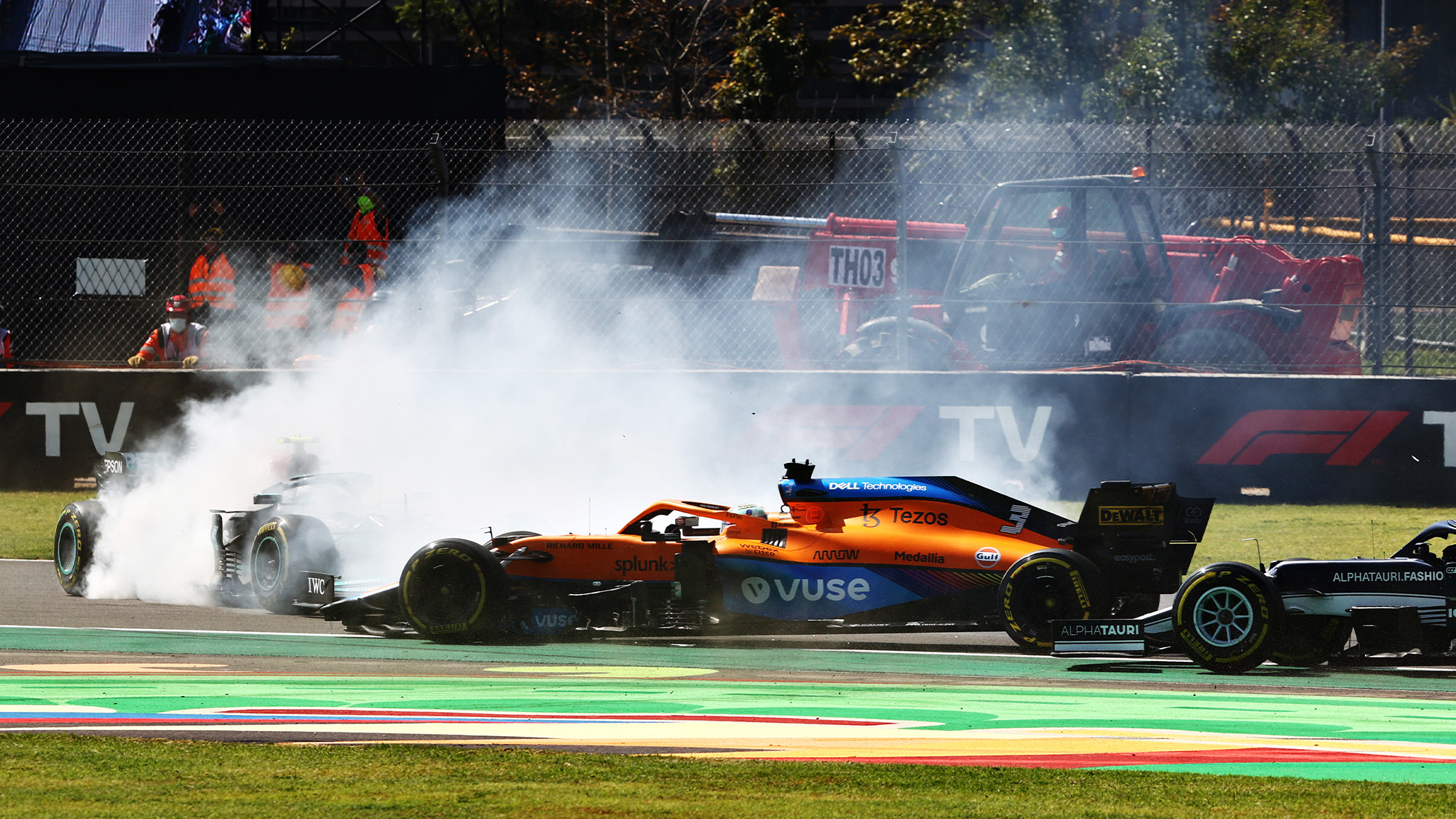 Giovinazzi was the first driver in the top 10 to stop, pitting from seventh and swapping mediums for hards on lap 17. Nobody around the Alfa Romeo opted to respond.

Hamilton did react to Perez, trying to open up the gap to avoid being undercut by the home favourite. He took 0.7sec out of Verstappen who immediately rectified that with a fastest lap on lap 20 to put the lead up to 7sec.

“These guys are obviously too fast for us,” was Hamilton’s verdict on lap 24. Verstappen was now 8.6sec clear in front and Perez comfortable hanging in the 2sec range behind the Mercedes driver.

Bottas still hadn’t found a route through on Ricciardo since the safety car period. An optimistic stamp on the throttle out of Turn 4 on lap 26 was the closest he came but it was a half chance. The Finn had to correct the snap of oversteer and the McLaren remained comfortable ahead.

Perez had struggled to break the 2sec barrier until lap 29. The Mexican was told to close up on the Mercedes ahead and he duly did so. The gap was down to 1.6sec across the line, well within undercut range.

It forced Mercedes to cover and bring Hamilton in on lap 30. He was fitted with the hard tyres as Perez continued on. The stop was reasonable but it didn’t work out as planned with Hamilton rejoining behind Leclerc’s Ferrari. Mercifully for Mercedes, the Monégasque was in for his first stop at the end of the lap.

Perez’s window was never really open for an undercut and he remained on track as Hamilton pumped in a fastest lap. Verstappen was brought in on lap 33 from the lead for a flawless stop. He dropped to second but retained an 8.5sec lead over Hamilton.

“Plan A plus five,” was the instruction for Perez who became the first Mexican driver to officially lead his home grand prix on lap 34.

Bottas still hadn’t cleared Ricciardo since the start but the Mercedes driver will have been giddy seeing the papaya car peel into the pits on lap 40 for a second stop. 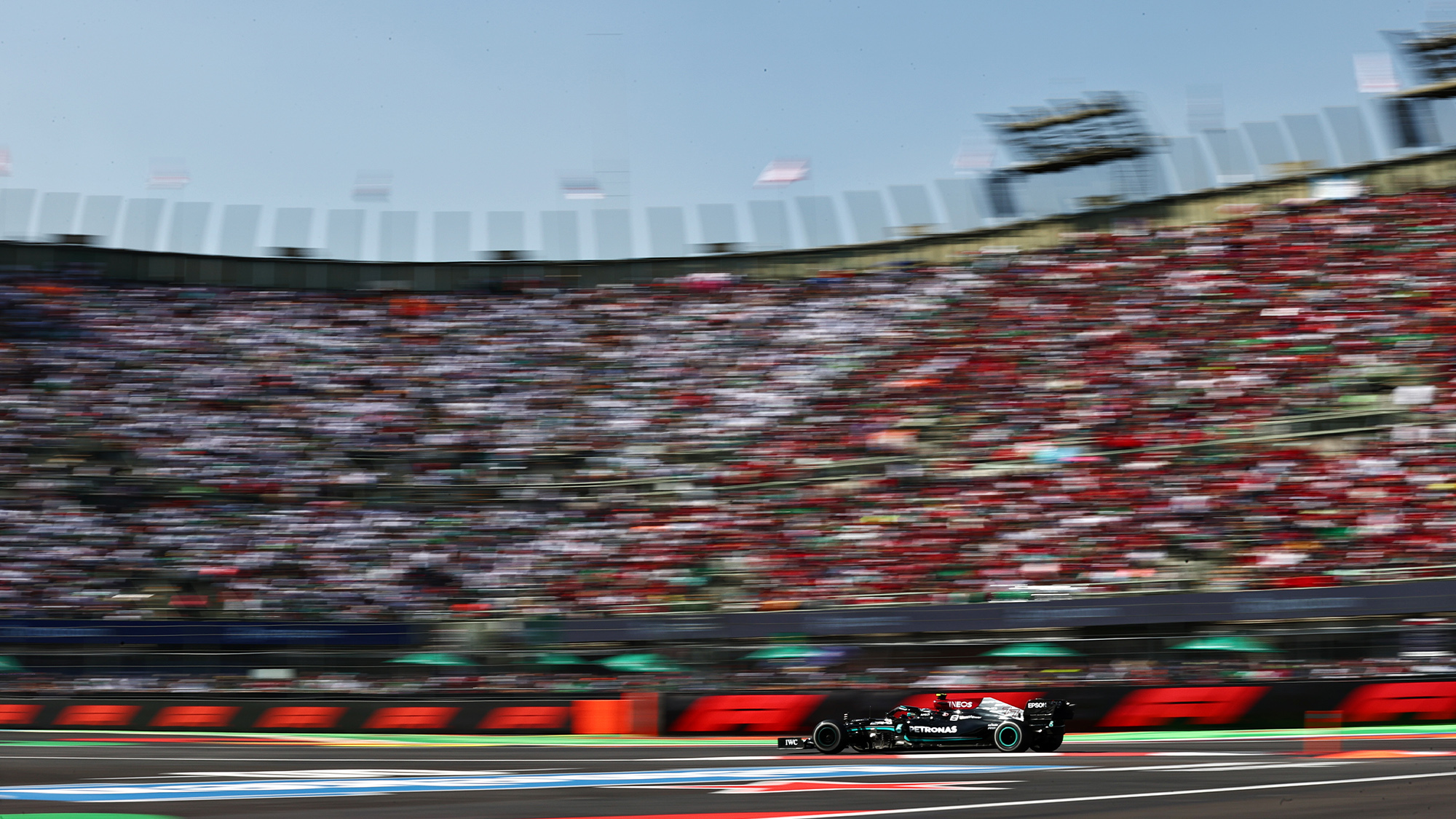 Perez took his tyres to lap 41 before he was in for fresh hard tyres. The Mexican rejoined 9.5sec down on Hamilton but with tyres 11 laps younger.

Things went from bad to worse for Bottas when he stopped for the second time on lap 42. An 11sec stop dropped him to 15th almost 10sec behind Ricciardo on the road.

Sainz was the other driver to complete a mammoth first stint. The Spaniard was fitted with new hard tyres on lap 43 to join sixth, 7.6sec behind his team-mate. Ex-McLaren team-mate Norris was the last in for a stop on lap 45. He filtered back out in 10th having run as high as seventh.

Perez was making nice progress on his fresh tyres, taking a sizeable 0.5-0.7sec chunk out of Hamilton each lap. The gap was down to 7sec on lap 48. A 1min 19.468sec in clear air cut a second off that margin on lap 50.

Sainz had recaught Leclerc after his stop on lap 55 and the latter was told to move aside for his team-mate due to the tyre life differential between them. He wasn’t moving out of the way immediately but eventually moved over for the Spaniard.

Perez’s pace was searing compared to the Mercedes ahead. He’d cut the advantage underneath two seconds opening lap 59 following a wide moment for Hamilton at Turn 12.

The roars from the crowd were increasing corner by corner as Perez continued to whittle the gap down lap after lap.

Hamilton had Norris ahead to lap but couldn’t get close enough to the McLaren to trigger the blue flags and lap it. Perez was close enough to gain DRS on lap 61 with Hamilton stuck in no man’s land. 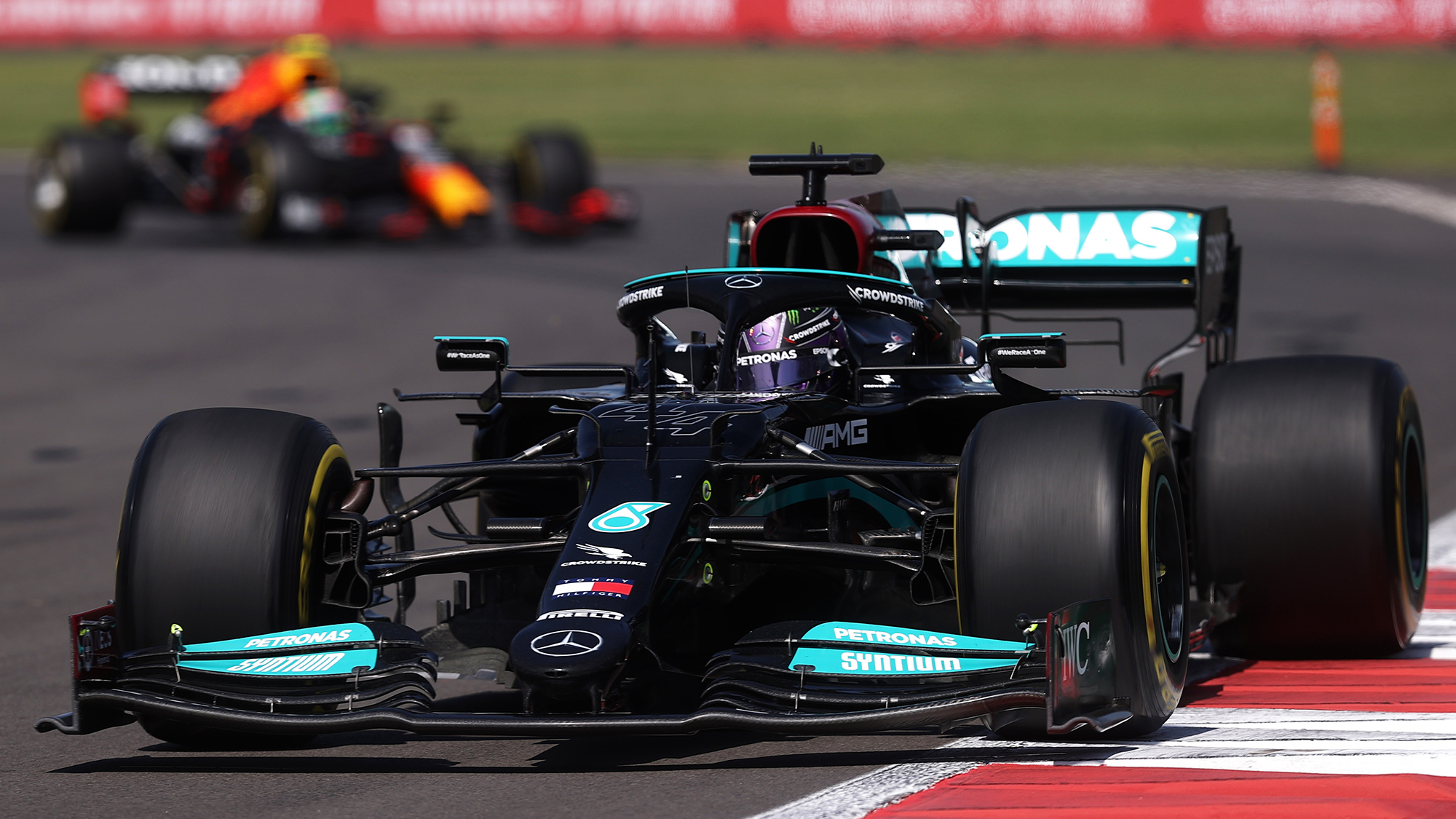 Perez follows Hamilton and the two were close throughout the afternoon

The two cleared Norris on lap 62 entering Turn 4 but Perez had just fallen out of DRS range in the process.

Bottas was in on lap 65 for soft tyres to prevent Verstappen taking the additional point for fastest lap.

After cruising up to the back of the Mercedes, Perez’s charge had stalled and he’d slipped to 2sec back from Hamilton with five laps remaining.

A minor lock-up for Verstappen in the stadium section on lap 67 was the only mistake on a straightforward afternoon.

Bottas had filtered out into the race leader’s path so a fourth stop to give him clear track was necessary to deprive Red Bull of the fastest lap point.

Opening the final lap, Perez was just 0.8sec behind Hamilton down the main straight. With DRS and full battery deployment, he couldn’t get close enough for a serious move. A late lunge into Turn 4 was a final throw of the dice but he couldn’t find a route through on Hamilton.

Verstappen ended up 16sec clear by the chequered flag, well clear of the other podium finishers but Bottas deprived him of the fastest lap on the final tour.

Hamilton finished a disappointed second with Perez shadowing him home. Gasly completed his strong but anonymous afternoon to finish fourth ahead of both Ferraris; Leclerc leading Sainz.

Vettel made the most of his free tyre choice at the start to get seventh ahead of Räikkönen, Alonso and Norris, who rounded out the top 10.