Five red flags, intermittent rain and a Mercedes team in turmoil made for an unpredictable qualifying session that ended with Max Verstappen taking pole at Imola.

The Red Bull driver will start at the front of the first sprint race of the 2022 season, ahead of championship leader Charles Leclerc, who felt he could have secured pole if it hadn’t been for two stoppages during the final session.

Both will be far ahead of the two Mercedes drivers who were eliminated in Q2 when a red flag halted their flying laps and rain began falling before the restart, making it impossible to escape the drop zone.

That red flag was the result of Carlos Sainz, who also had a day to forget, crashing out in Q2 and starting tenth on the grid at a circuit where passing is rarely easy. Sergio Perez lost out in the final session, qualifying his Red Bull in seventh.

It means that the midfield battle will be taking place close to the front: Lando Norris, Kevin Magnussen, Fernando Alonso and Daniel Ricciardo fill the second and third rows of the sprint race grid.

Slick tyres made an appearance for the first time this weekend, following a wet first practice session, although grey clouds loomed overhead.

The session had only just got underway when Alex Albon’s right rear brake caught fire and imploded, showering the circuit with carbon fibre.

It was the end of qualifying for the Williams driver and a pause for everybody else as marshals swept the track clear of debris. 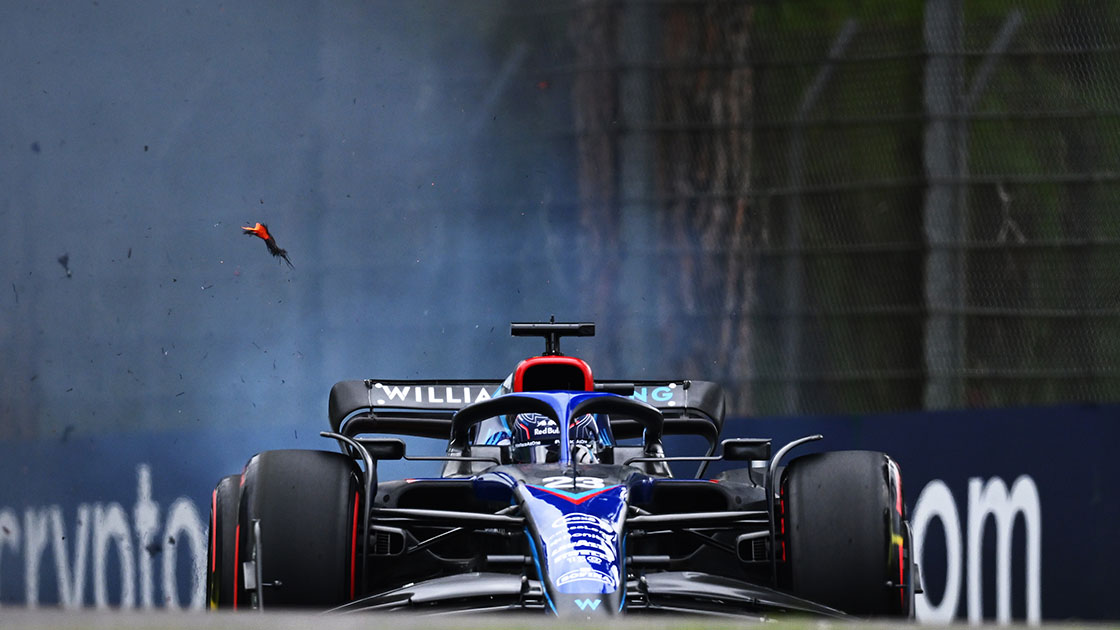 The restart brought a familiar scenario with Red Bull and Ferrari out in front, the Red Bull having a small advantage at the start of the lap through Tamburello and the Ferrari faster through Rivazza and the straights on either side.

Getting through was a formality for the frontrunners, but they didn’t include the reigning constructors’ champions. With five minutes to go, Lewis Hamilton, George Russell and Sergio Perez were still in the bottom five drop zone and only escaped just before yellow flags came out for a spinning Nicholas Latifi in Turn 5.

The Mercedes’ weren’t safe though, as Russell and Hamilton were pushed back down as the track became faster. Esteban Ocon also dropped into the bottom five without any recourse: he remained in the pits as the clock ticked down with a gearbox issue, resigned to being eliminated in Q1.

Another set of flying laps from Mercedes took George Russell to relative safety in 11th but Hamilton’s time was only good enough for 13th, and he had no option but to immediately go for another flying lap.

He scraped through — just — finishing 15th and 0.004sec faster than 16th-placed Yuki Tsunoda. Ahead was a 1.6sec gap to Charles Leclerc at the top of the timesheet with a 1min 18.796sec lap. “How far are we off man, that’s crazy,” said Hamilton over the radio.

Verstappen was half a second slower, ahead of Sainz by just one-hundredth. In fourth was the Alfa Romeo of Zhou Guanyu.

“One timed lap before the rain hits,” Charles Leclerc was told as all remaining 15 cars headed out on track as the light turned green for Q2.

The threat of rain meant that an immediate second flying lap was called for. Sainz was rounding Rivazza, heading towards the start/finish line when the rear of his car stepped out, he spun round and skidded into the wall, bringing out the second red flag of qualifying.

“I did a mistake I wasn’t expecting at all,” said Sainz. “It wasn’t a lap that was properly on the limit at all. Unfortunately I lost it. I didn’t have any warning… it just went.” 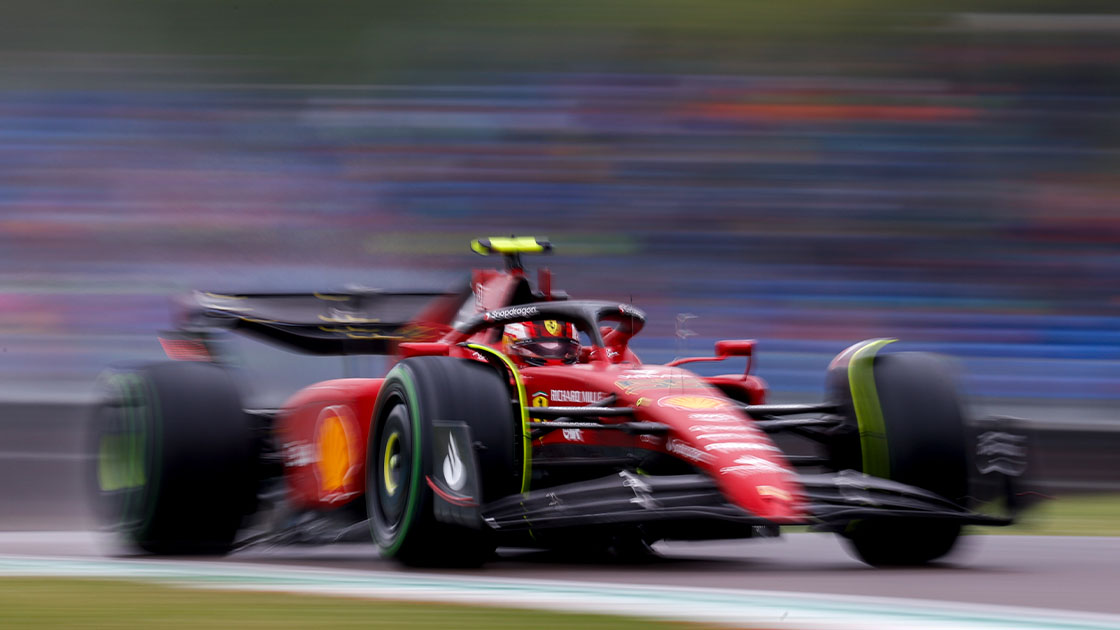 Sainz was pushing in Q2 – and ended up in the wall

As his car was cleared, the heralded rain appeared, effectively locking the cars into position.

It was good news for Valtteri Bottas who had been close to the Q1 elimination zone but were in the top ten when Sainz crashed.

At the top end of the pitlane, however, it was disastrous: the Mercedes drivers had been struggling to get heat into their tyres and were relying on their second flying lap to set a more representative time. The red flags and rain ended that hope and they were left mired in the drop zone, along with Mick Schumacher, Zhou Guanyu and Lance Stroll.

“It wasn’t a great session,” said Hamilton, who was seen exchanging stern words with team principal Toto Wolff in the pits. “Naturally it’s disappointing. I think we underperformed as a team today. There are things we should have done and didn’t do. We’ll work as hard as we can to move up in the sprint race.”

Towards the end of the session, Norris, Perez, Leclerc and Alonso were among the drivers who headed out on intermediate tyres in preparation for the final shootout.

The rain clouds had moved on for the final top ten shootout, but the wet circuit meant intermediate tyres were still needed and conditions remained unforgiving — as Kevin Magnussen found to his cost. Dipping a wheel onto a white line at Acque Minerale, the Haas driver spun and headed straight for the wall. But, just as Valtteri Bottas had done in the earlier practice session, he stopped short of making contact.

The red flags were brought out, but Magnussen managed to reverse out and make it back to the pits in time for the restart, with 8min 51sec to go, and no times yet set. 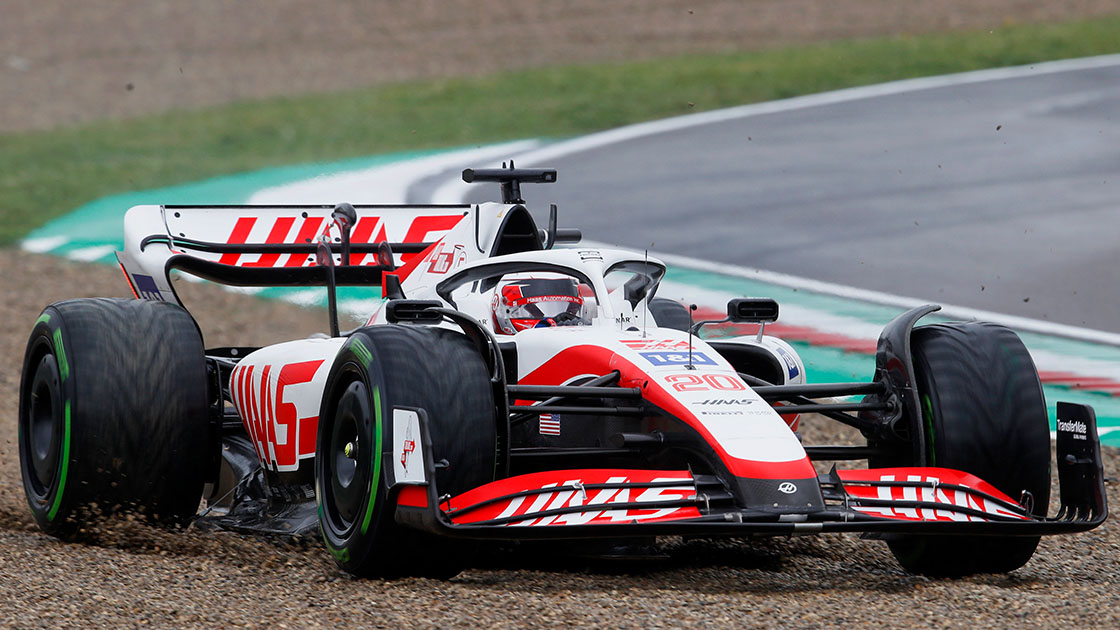 Despite the lack of rain, it was still too wet for slicks and the cars were back out on intermediates for the restart. There were sideways moments for Verstappen, but the world champion flew around Imola, setting a 1min 27.999sec time that was almost 0.8sec faster than Charles Leclerc’s effort that put him second. The Ferrari driver was followed by Norris and the recovered Magnussen.

There had already been a red flag in each of the session, but Bottas made it four when he pulled off the track and climbed out of his Alfa Romeo.

It took 15 minutes before the light went green again, by which time the rain was falling, with just 2min 58sec of running, leaving enough time for just a single flying lap. 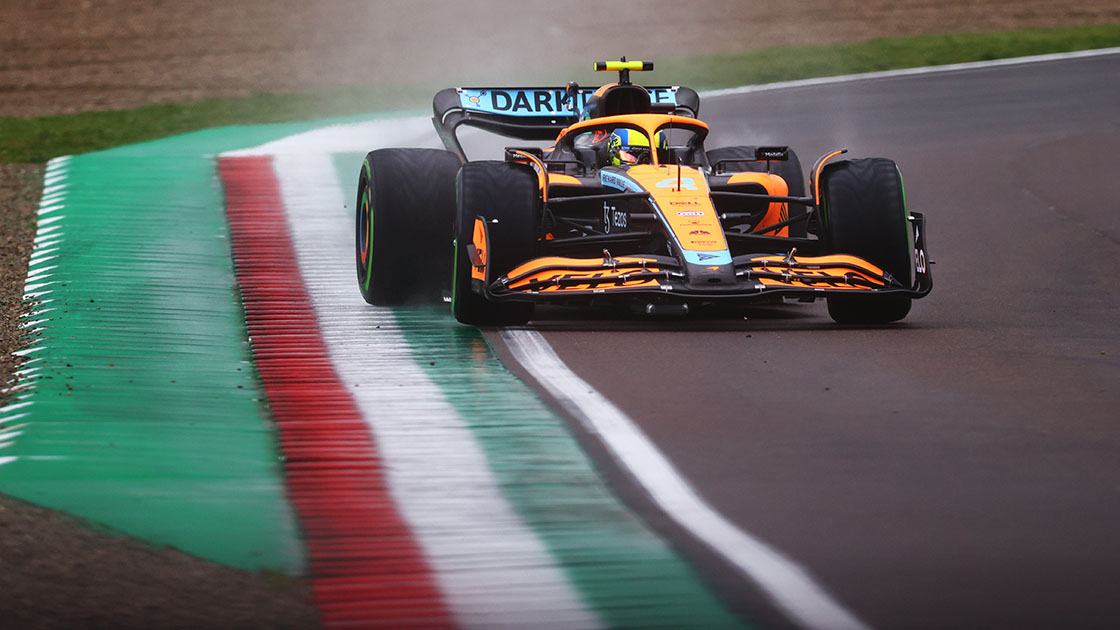 Norris brought out the fifth and final red flag

But it wasn’t to be. Lando Norris was the final driver to lose it on a white line at Acque Minerale, making contact with the barrier on this occasion. A fifth red flag brought an end to the session and secured Norris’s third place on the grid for Saturday’s sprint race.

“Ah, such a shame,” said Leclerc who remained second behind Verstappen. “We definitely had the pace.”