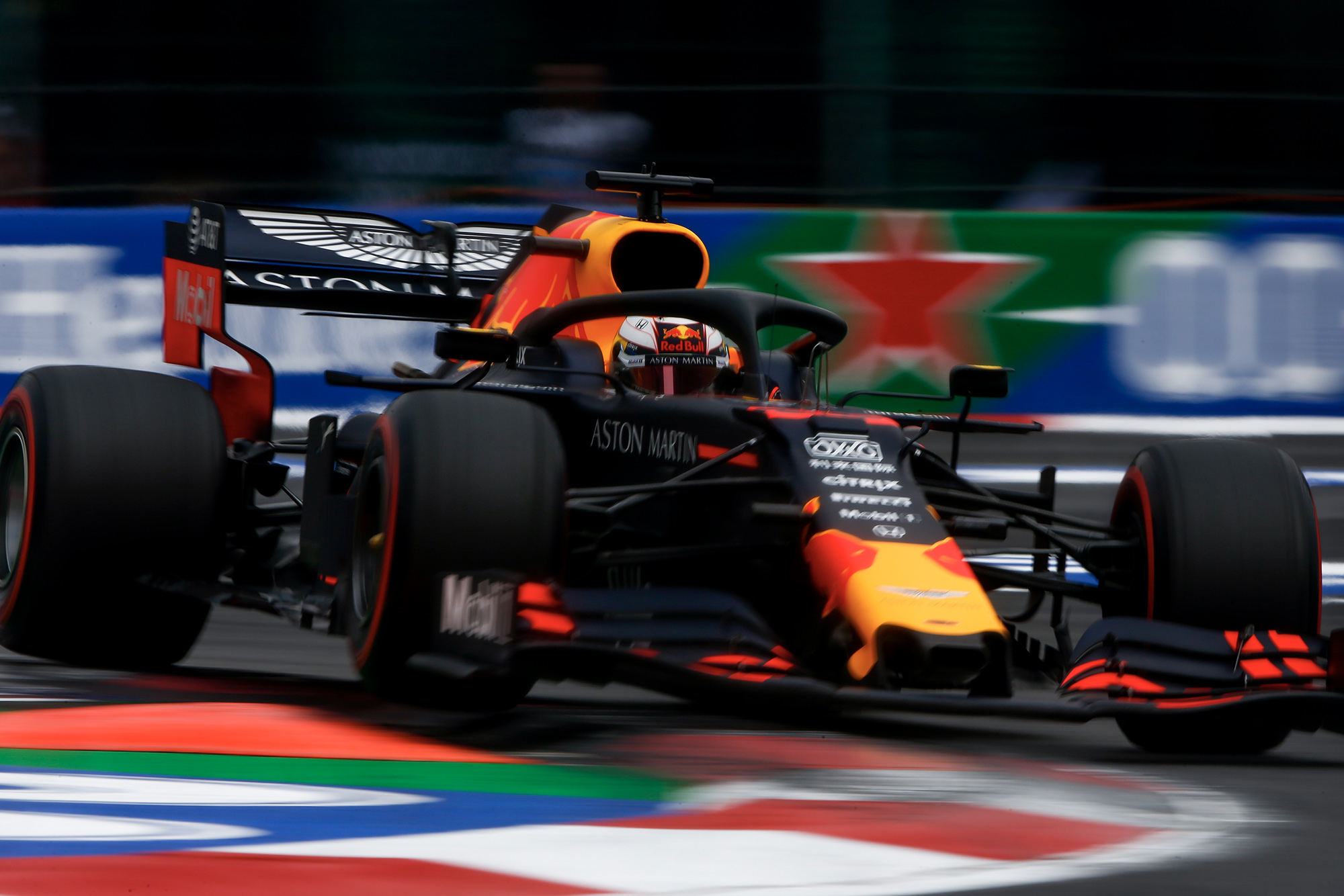 Coming into the Mexico weekend, Max Verstappen paid Renault as near as you’re going to get to a compliment.

“The Red Bull has good mechanical grip and, actually, being positive, I think the Renault engine was always quite decent here,” he said.

True enough, the Renault’s ability to spin the turbo a little quicker always saw Red Bull in comparatively good shape since F1 returned to Mexico and its rarefied air. But still, Verstappen had been unable to secure a pole at the previous two Mexican GPs, despite winning them both.

Sebastian Vettel’s Ferrari pipped him by 0.09sec in 2017 and last year, much to his disgust, team-mate Daniel Ricciardo robbed Max of the honour of being F1’s youngest ever pole man by 0.026sec. Max felt that Daniel was disproportionately thrilled about that and didn’t sleep too well that night.

This time, ironically with Honda power, Verstappen finally did it and took his second pole of the year, after Budapest. Until, this time, the stewards intervened… 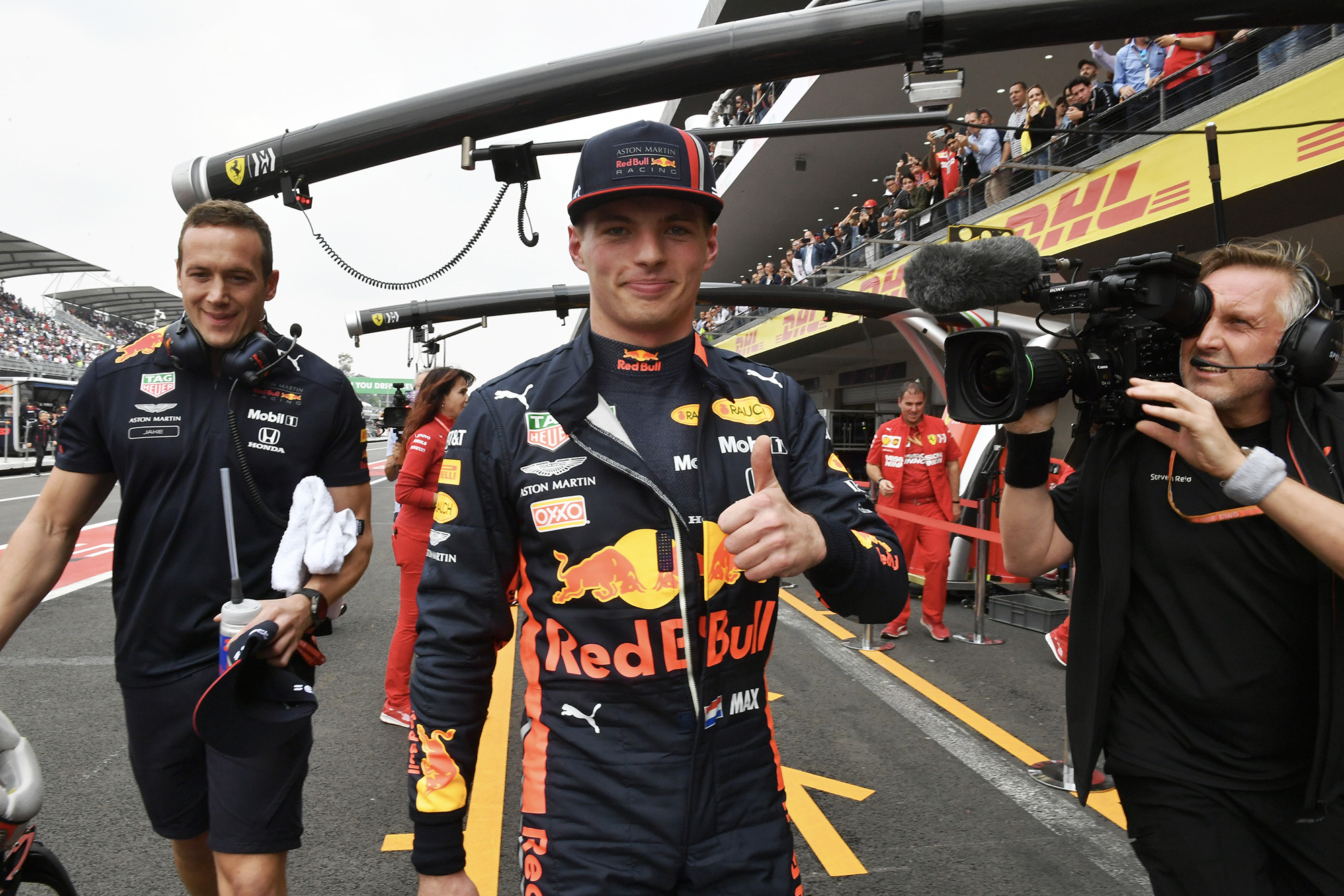 All smiles… until he saw the stewards Photo: Motorsport Images

But hats off to the Japanese firm anyway, with all four Honda-powered cars in the top 10. It also happens to be the most successful manufacturer in Mexico with four: Richie Ginther in 1965, and an eighties hat-trick through Nigel Mansell, Alain Prost and Ayrton Senna. For the record, Ford and Climax can boast three wins here but neither Mercedes and Ferrari, nor Renault, have more than two.

Asked whether he’d backed off, Verstappen paused and then said, “It didn’t really look like it, did it? No.”

With the Ferraris quickest in the first sector of the Mexico lap, which includes that long, long main straight, Verstappen hit back in sectors two and three and pipped Charles Leclerc’s Ferrari by just over a tenth of a second on the first Q3 run.

Verstappen found another tenth and a half on his second run to beat Leclerc by an impressive 0.27sec but in doing so, he had failed to slow in the final sector after Valtteri Bottas shunted his Mercedes when he ran out of tyres and went wide onto the dust out of the final turn, happily without serious harm.

It would mean that Leclerc would ultimately claim his seventh pole of 2019.

Ahead of Verstappen on the road, Lewis Hamilton and Vettel were nip and tuck with their first Q3 runs in the first sector. Lewis improved his overall lap time but was slower in the yellow-flag final sector, while Vettel backed out despite feeling he was on course to improve.

Verstappen improved his final sector and it surely can’t have helped his cause that in the post-race press conference, asked whether he’d backed off, he paused and then said, “It didn’t really look like it, did it? No.”

There’s not much else he could have said though, considering every detail of a driver’s input is available for telemetric scrutiny.

To be fair to Verstappen, although there was a single waved yellow as he approached the final turn, it may not have been in his eye line and there appeared to be no track or cockpit yellow warning light, potentially due to sensors having been destroyed by Bottas’s accident. After being summoned to the stewards, Max was hit with a three-place grid drop and two penalty points. 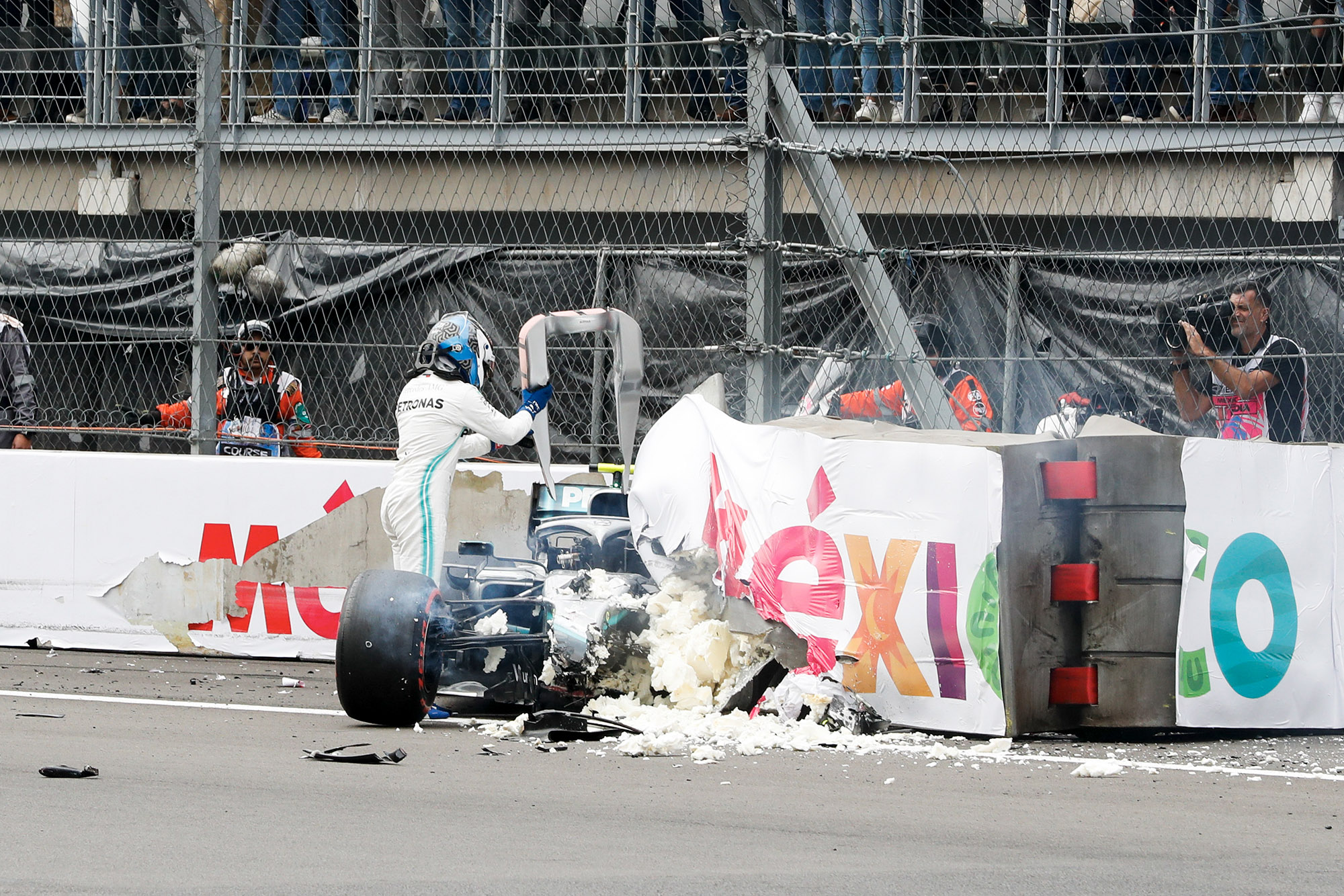 Verstappen had secretly hoped to challenge for pole even if, publicly, he proclaimed that Ferrari’s straightline speed advantage would prove conclusive.

Leclerc and Vettel though, had to be content with second and third best times.

“My first run was good but for the second I tried to get some more front end,” Leclerc explained. “It helped in the first sector (where he found 0.06sec) but I lost the rear in the last sector and gave up all the time I had made up.”

The Monégasque outqualified Vettel by 0.15sec and is now guaranteed to finish the season ahead in their intra-team qualifying tussle.

Mexico has always been a tricky one for Mercedes. It places high demands on cooling and tyre graining is always an issue, something that is no different this year and possibly exacerbated by the relatively long wheelbase W10s. But still, Hamilton was close, fourth quickest and just 0.09sec adrift of Vettel.

While the soft tyre looked highly fragile, made worse by rain repeatedly washing the circuit clean, a one-stopper still looks highly likely given that all three of the top teams ran the medium tyre in Q2 and have hence side-stepped the need to run the red-walled tyre at all.

That, allied to a very respectable and consistent long run on the hard tyre from Bottas on Friday, could mean that Mercedes is far from out of the picture.

Given the extent of the damage to Bottas’s car, which is still being assessed, it is not impossible that he could have a gearbox penalty added to his sixth quickest time. If that’s the case, Hamilton’s task of outscoring Valtteri by 14 points to clinch his sixth world championship might not be out of the question, even if Hungary is the only venue at which he has previously managed that in 2019.

Pipping Bottas by just two-thousandths was Alexander Albon, who gave himself a harder job than he wanted with an off at Turns Seven/Eight on Friday, which robbed him of circuit time.

“I lost the rear and it went so quickly that it caught me out,” the frustrated Anglo-Thai admitted before staging a good recover on Saturday to miss Hamilton’s time by just 0.07sec.

Carlos Sainz, once more, was best of the rest and continues to do a great job for McLaren. So good, in fact, that the Spaniard also tried to clear Q2 on the medium-compound Pirelli, using it for his first run before swapping back to the soft for his second attempt to go through to Q3.

“I felt very comfortable in the car right from the start and it’s the first time in years that we have tried to go through on mediums like a big team. We didn’t quite make it but I’m proud to be trying!” he smiled.

Team-mate Lando Norris backed him up with eighth quickest lap. Some seven-tenths adrift after the first Q3 run, Lando got it back to a more respectable 0.31sec on his second.

“To be honest I was struggling a bit and not super-confident, but Carlos has been doing a great job. I’m happy to be P8 and ahead of the Toro Rossos,” he said. 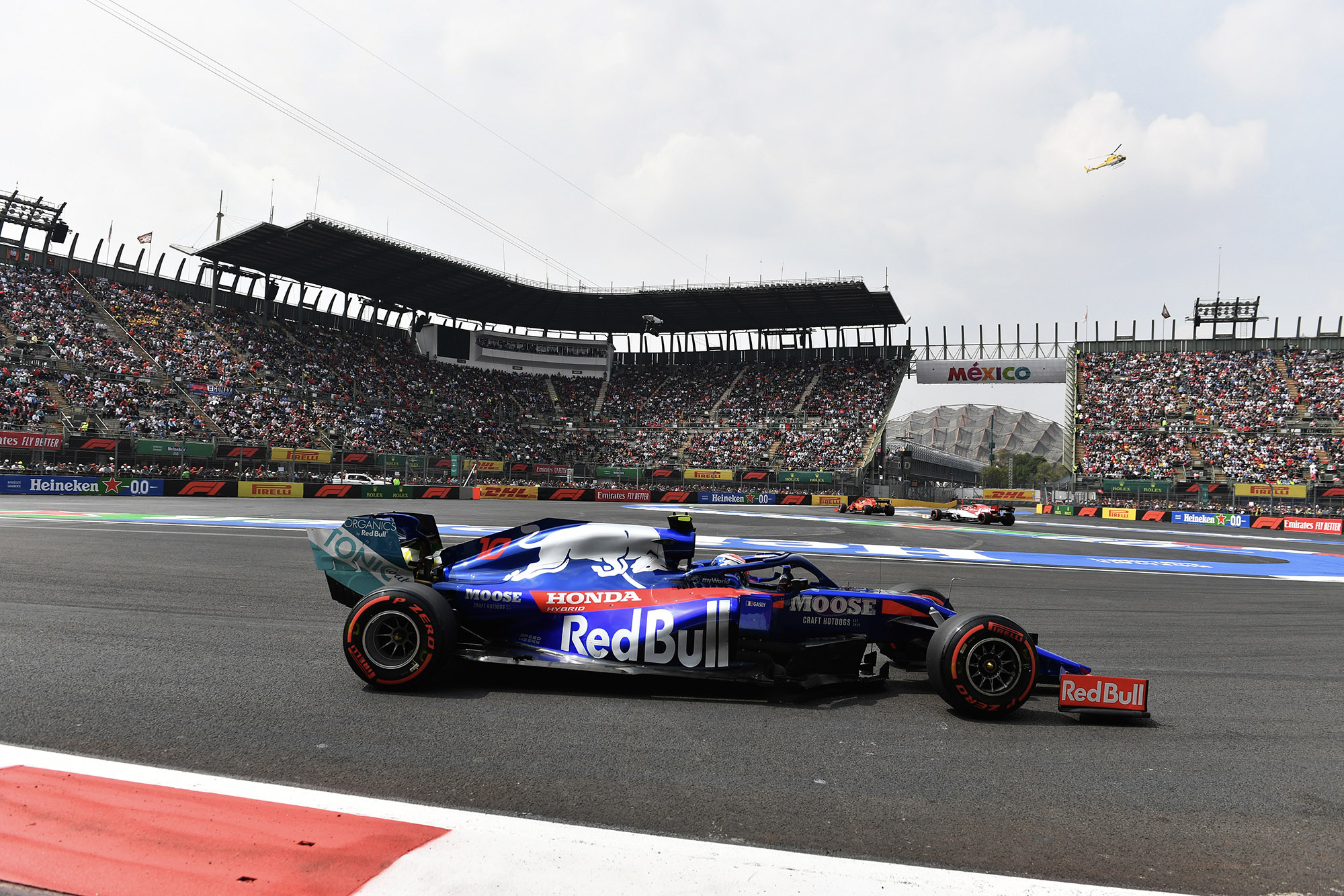 Getting both Daniil Kvyat and Pierre Gasly into the top 10 was a great effort from Toro Rosso, the car looking about as sure-footed as you are going to get around Autodromo Hermanos Rodriguez.

“The altitude and the lack of air put a huge strain on the cooling, so we brought a number of new parts here to cope with that and they seemed to perform well. The performance is maybe higher than we expected,” explained chief engineer Jonathan Eddolls.”

It was the first time that Kvyat had made Q3 since Monaco and a good effort from Gasly too, just a tenth slower despite fighting a Mexican stomach bug. The Frenchman is chasing his fourth points finish in six races since his mid-season demotion back to the Red Bull junior team.

But the soft tyre-shod McLarens and Toro Rossos will face a strategic problem in the race, with home hero Sergio Perez’s 11th-placed Racing Point and the Renaults of Nico Hülkenberg and Daniel Ricciardo, who line up 12th and 13th respectively, doubtless going to the grid on the more robust medium compound.

“A one-stop is going to be very tricky for us,” said Sainz, “and while we might be able to do something at the start on the softer tyre, after two or three laps the guys ahead on mediums are just going to pull away and the guys behind are probably 10sec ahead of us on strategy already and should easily do a one-stop if the medium doesn’t grain too badly.” 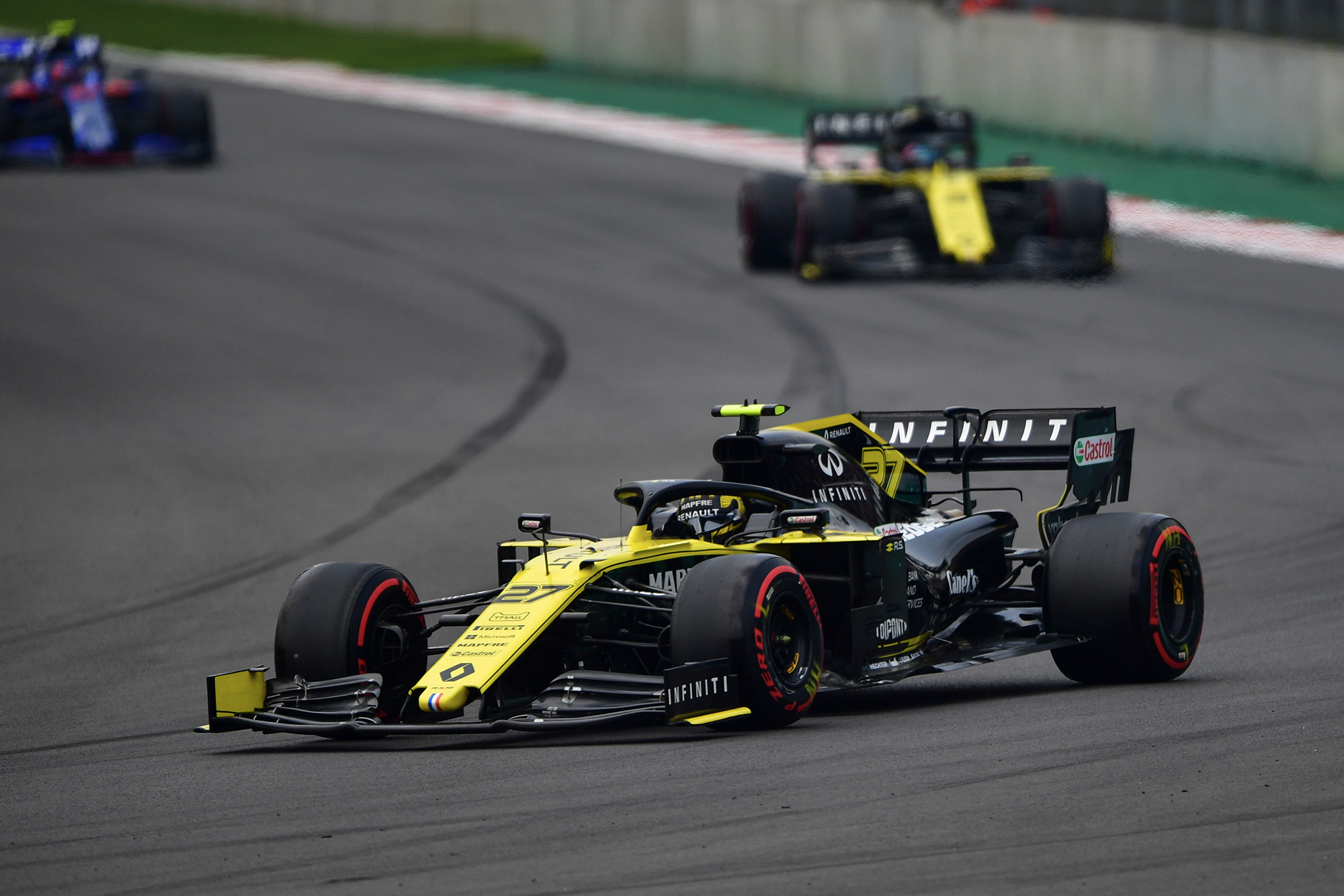 A disappointing qualifying but Renault has tyre advantage for the race Photo: Motorsport Images

These are far from easy times for Renault at present with interim CEO Clotilde Delbos confirming that the future in F1 will be discussed as part of an upcoming “deep review” of Renault’s ‘Drive the Future’ strategy, implemented by former Renault-Nissan alliance boss Carlos Ghosn last year.

Following that and the Japanese disqualifications, the last thing the team needed was a cooling system contamination that prevented them running at all in FP3, and hence going into qualifying blind.

Something tells you that Verstappen is favourite to score a Mexican hat-trick but there are a number of things to ponder.

First off, after Sochi, Mexico just happens to be the other circuit on the calendar on which the P3 man, with a tow, is at an advantage over the pole man. That will now be Hamilton, but does he have enough grunt to overcome the Ferraris. Likely not. What chances of more Ferrari collaboration after Russia? Cue potential two-fingered response from Leclerc.

Then there’s the dynamic between Leclerc and Verstappen. Think of Austria. Then Silverstone. Then Turn Two on the opening lap at Suzuka. Yes, Leclerc’s front end washed out, but if it had been anyone other than Max, would he have kept his boot in? Some form of contact between the pair at some stage is not beyond the bounds of possibility. 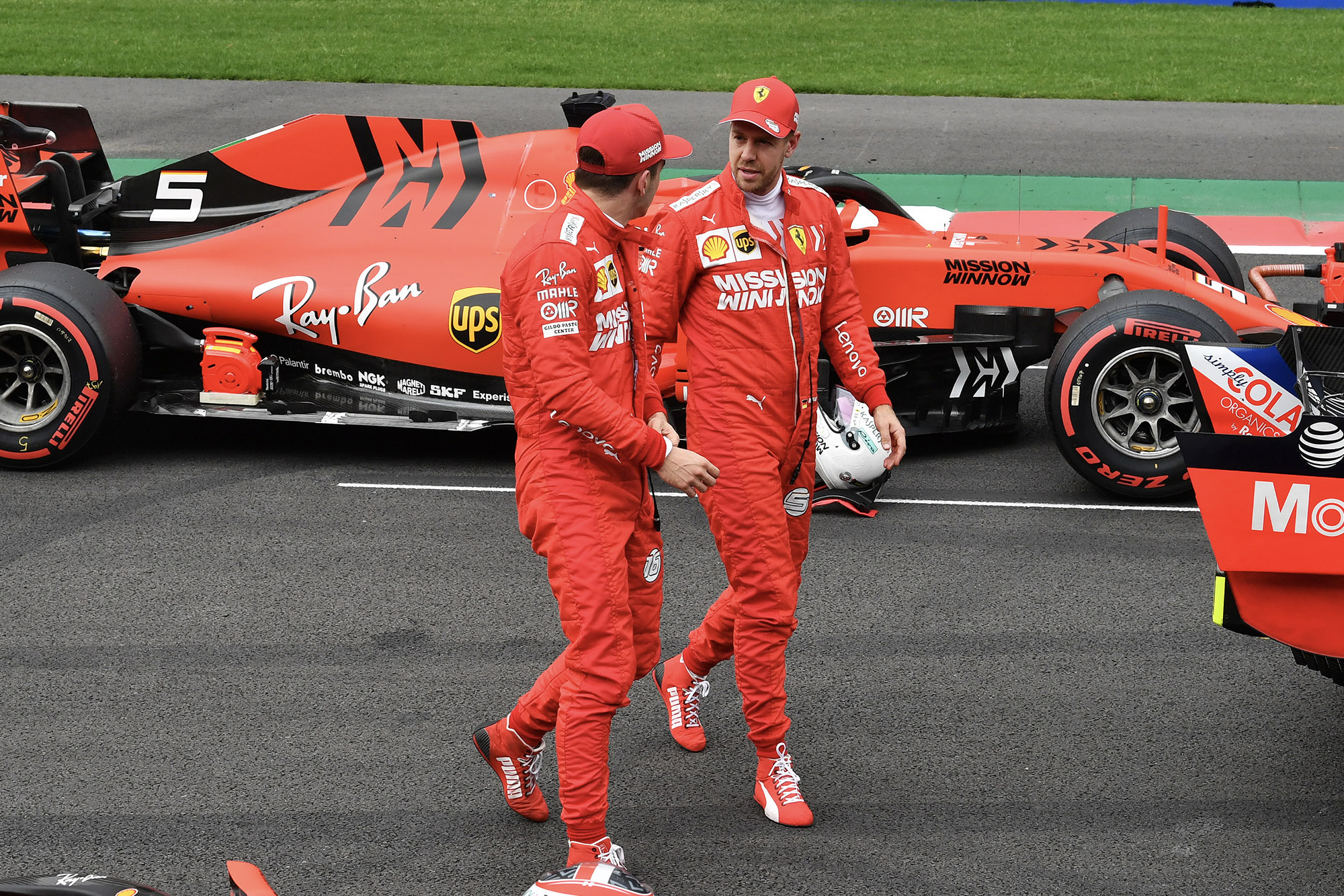 Leclerc and Vettel will start on the front row Photo: Motorsport Images

Assuming they all come out of Turn One intact, the race will all be about making the tyres last. Yes, Ferrari has a straightline speed advantage but it is always reduced in race trim and in Mexico the DRS, despite there being an extra zone this year, is ineffectual in the thin air. That’s why Monaco/Budapest wing levels only reward you with Monza levels of downforce.

The race will be an “adventure” Vettel said, with Mercedes’ trackside engineering director, Andrew Shovlin, calling it “a journey into the unknown.” You just get a sneaking suspicion that Red Bull’s mechanical grip and additional rear end support could be kinder to the rubber and end up being decisive. That Max hat-trick is still on the cards despite starting fourth.