Max Verstappen emerged victorious from the latest battle for the lead between him and Charles Leclerc, as he won the sprint race at Imola to start on pole for the Emilia Romagna Grand Prix.

The Red Bull and Ferrari fight is a familiar story in 2022 but hasn’t got tired yet. After Verstappen lost the lead at the start, his duel with Leclerc developed in the final laps; the Ferrari falling into the Red Bull’s clutches as its tyres wore faster.

There were passes aplenty further down the field, thanks to a wet and interrupted qualifying session that shuffled the grid.

While the top two fought at the front, their team-mates managed to recover from starting positions in the lower top ten: Perez climbed from seventh to third while Sainz, who crashed in qualifying, advanced from tenth to fourth, bringing all four of the fastest cars together for the grand prix. 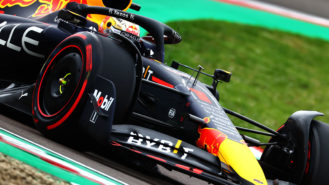 Five red flags, intermittent rain and a Mercedes team in turmoil made for an unpredictable qualifying session that ended with Max Verstappen taking pole at Imola. The Red Bull driver…

Haas’s decision to start Kevin Magnussen on the medium tyre, in contrast to most of the other cars didn’t appear to pay off, and the Dane slipped from fourth to eighth in the race.

Although the qualifying rain clouds cleared for the sprint, there was no light for Mercedes: George Russell and Lewis Hamilton were among the cars stuck in a train behind Sebastian Vettel for much of the race, finishing 11th and 14th respectively.

Pierre Gasly and Zhou Guanyu did their race prospects no favours by coming together on the opening lap. Zhou span off into the wall and retirement, while Gasly had to pit with a damaged front left wheel.

You didn’t need to see the start to know what happened when the lights went out. The roar of the tifosi accompanied a stellar launch from Charles Leclerc who shot into the lead ahead of the wheelspinning Max Verstappen. 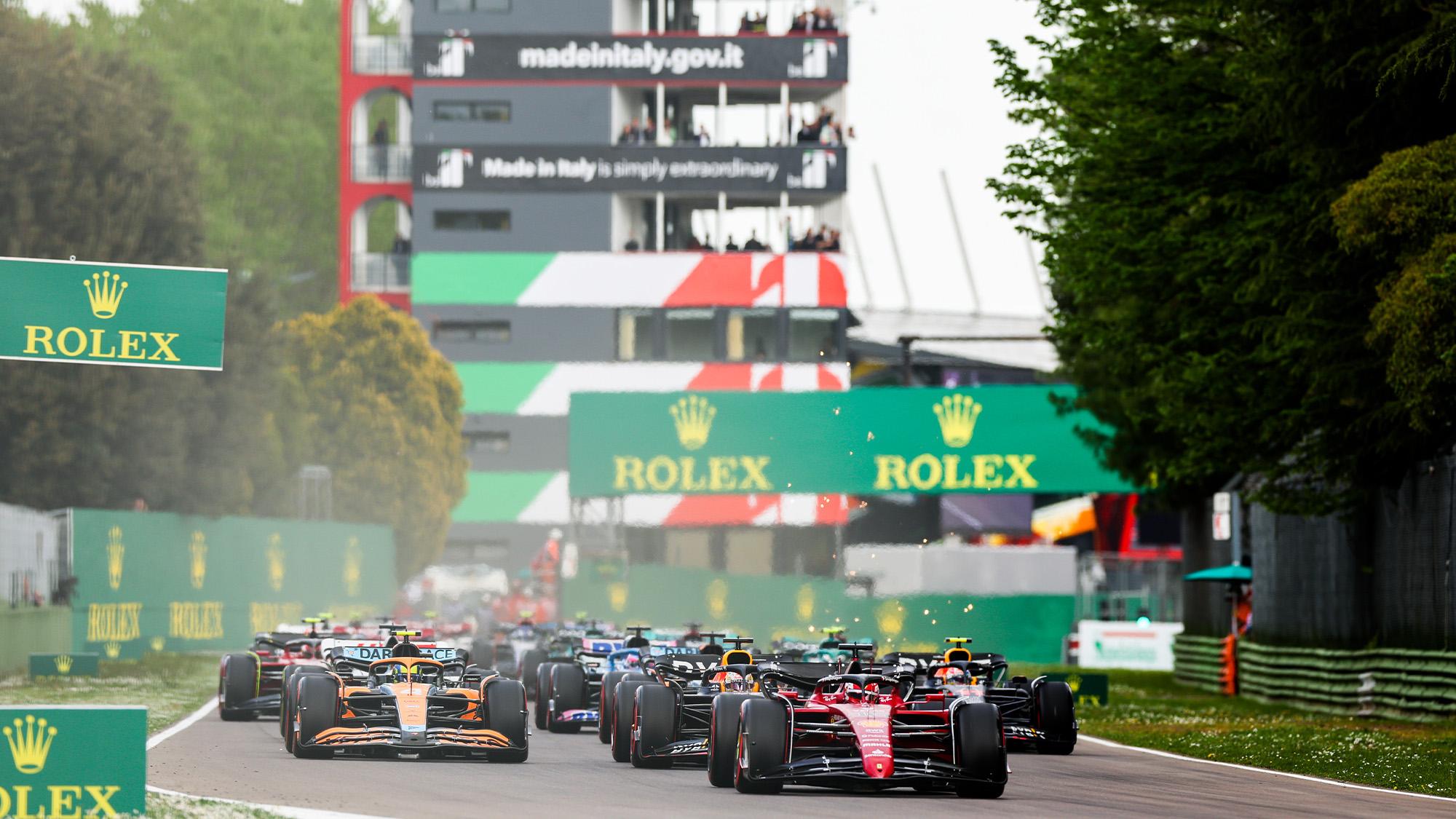 Leclerc led the field into Tamburello on lap 1

Behind them, Norris and Magnussen retained their third and fourth positions, but the medium-tyred Haas weaved aggressively ahead of fifth-placed Perez on the run to Turn 3, earning him the black and white warning flag for unsportsmanlike conduct.

Fernando Alonso was slow away from fifth and was jumped by Ricciardo and Perez, but the action was neutralised quickly, as Gasly moved to the inside of Zhou’s Alfa Romeo at Piratella, and was squeezed. The pair made contact and the Alfa speared off the track, bringing out the safety car.

Racing resumed on lap 5 and Leclerc powered away, unchallenged in the lead. Alonso looked to be struggling again in seventh, running wide and allowing Sainz to close up. The Ferrari got past at Tamburello on lap 7 under braking.

Leclerc had a 1.2sec lead by the time DRS was activated on lap eight. Perez was right behind the Haas of Magnussen and easily got past on the main straight for fourth – the pair already 7sec behind Leclerc.

Perez quickly began closing the gap to Norris ahead, as Magnussen fell back, still slow on the medium tyres. 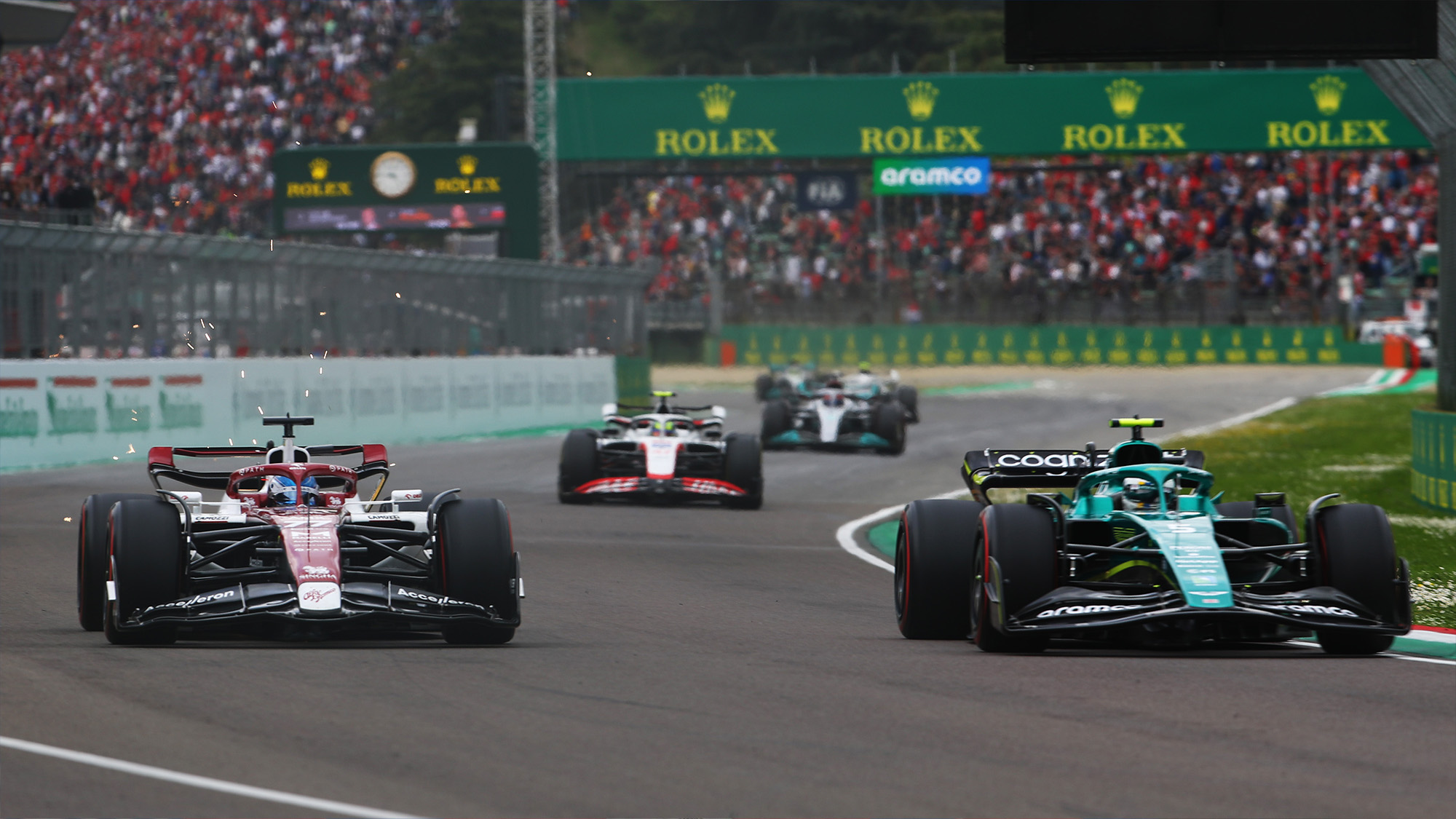 Further back in ninth, Sebastian Vettel was holding up a string of cars, including both Mercedes, running 12th and 14th, as well as Mick Schumacher’s Haas.

Valtteri Bottas managed to escape on lap nine, passing Vettel and heading up the road.

Perez continued moving up the field on lap 11, with a DRS pass on Norris for third place, 6.5sec behind his team-mate.

Magnussen was going in the opposite direction, losing fifth place to Daniel Ricciardo who streaked away, more than a second ahead by the beginning of lap 12 when Sainz also passed the Haas.

Sainz’s progress up the field continued on lap 14, with a DRS pass on Ricciardo.

A hopeful Haas pitwall told Magnussen on lap 15 that the tyres would come back to him, with the soft-tyred cars set to lose pace as their tyres dropped off.

Just as the message went out, the medium-tyred Mick Schumacher made it past Sebastian Vettel.

Bottas was also on the move, getting a run on Fernando Alonso ahead of the start/finish line and passing him into the braking zone for Tamburello.

It was the culmination of an intense battle, with Alonso given a black and white flag for weaving on the main straight. 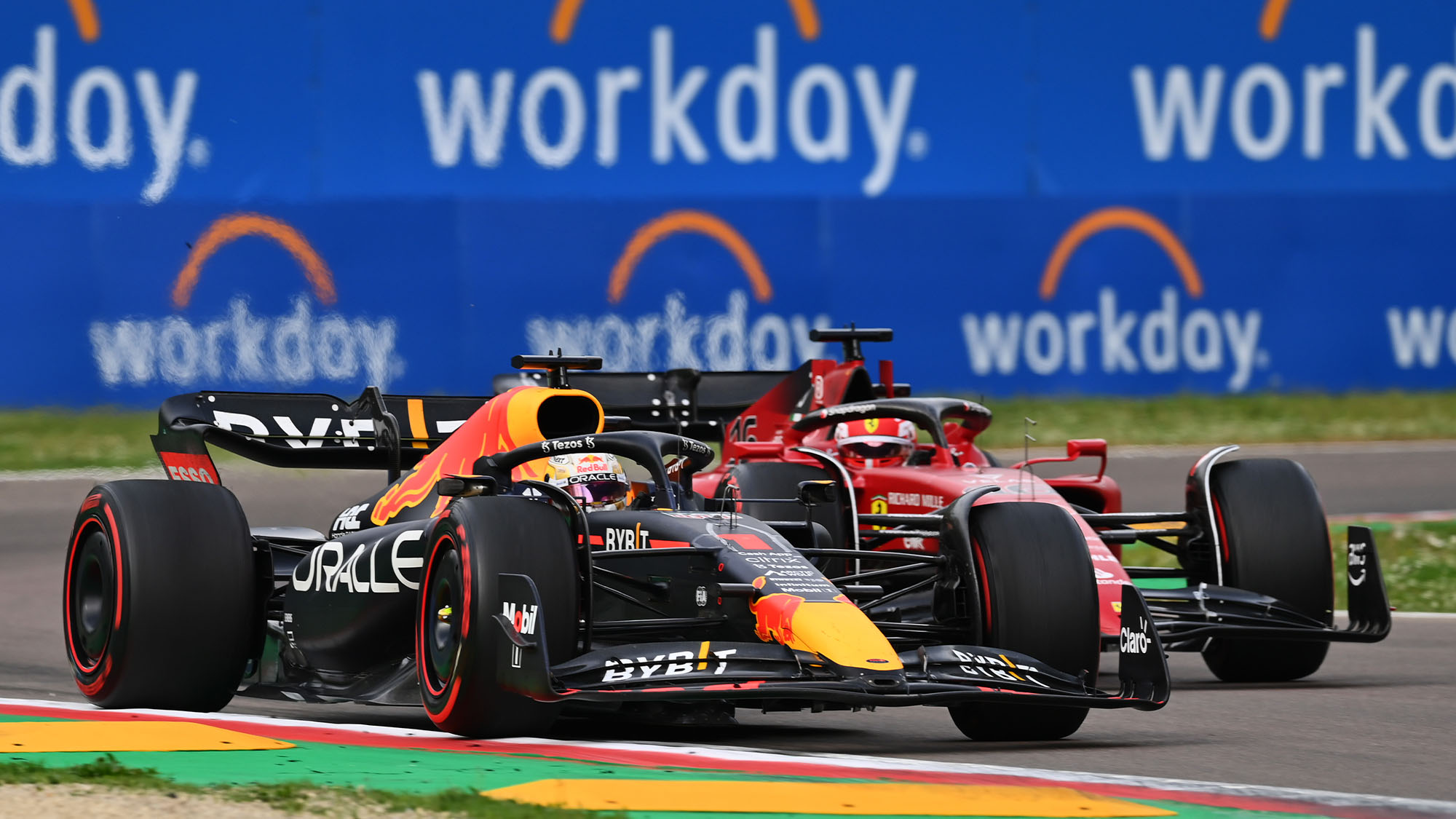 Verstappen went past on the outside of Tamburello

Haas’s analysis looked to be correct for some of the field at least: Verstappen was given a message that Leclerc, 1.2sec ahead, was suffering tyre graining, and the Red Bull began gaining around 0.2sec per lap.

The Dutchman was within 0.6sec of the Ferrari as they started lap 19. DRS allowed him to close right up to Leclerc’s rear wing and he was even closer a lap later, when he surged past the Ferrari, taking the outside line into Tamburello and making it stick.

There was no response from Leclerc, and Verstappen was almost 2sec ahead starting the final lap. He crossed the line with eight more championship points to his name and will once again start on pole for the Emilia Romagna Grand Prix.

Second-placed Leclerc adds seven points to his total but said that Ferrari would need to analyse why his front-left tyre suffered from graining that made hium vulnerable to Verstappen.

While the focus was on the lead battle, Sainz passed Norris, ensuring that he’ll start alongside Perez tomorrow and Bottas overhauled Magnussen for seventh to cap a solid performance after falling back at the start. 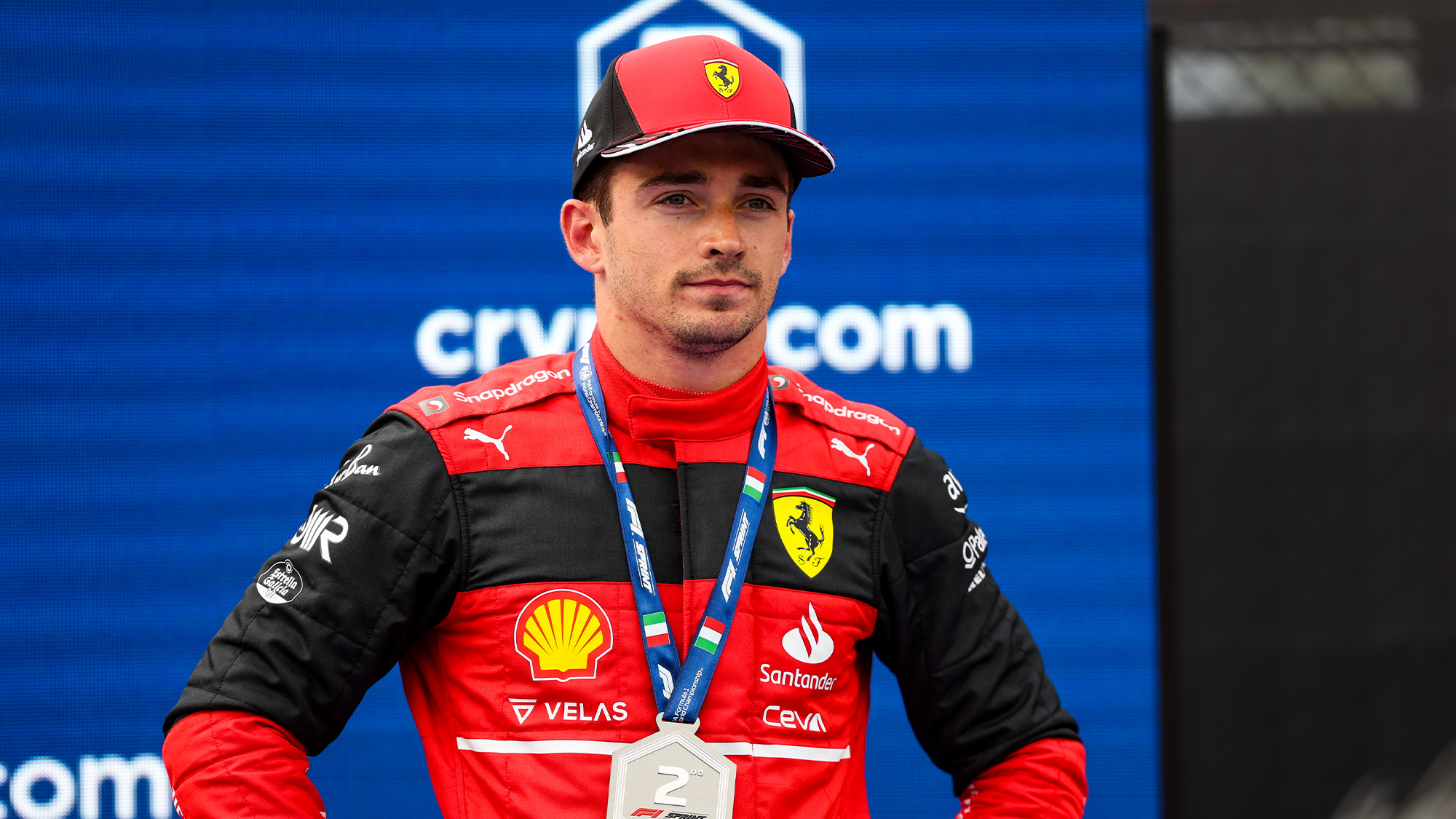