In the latest issue, we celebrate Silverstone’s 70th anniversary as Lewis Hamilton, Murray Walker, Nigel Mansell and Jackie Stewart reveal their favourite moments from the home of British racing. Pick up your copy or download yours here

They had since Jim Clark’s death fought a tacit battle to be the best: Jochen Rindt, perhaps the faster, attempting to put the fragility of his Lotus to the back of his mind, and Jackie Stewart, the more complete, revelling in his Matra’s strength and security.

The latter had been doing the winning: four victories and a retirement (when leading) from the first five GPs of the season to establish a huge championship lead. Rindt was in a very different place. The ‘King of Formula 2’ had yet to win in F1. He was also at daggers drawn with his team boss over wings – drastically lowered since his terrifying flight and crash-landing from the lead of the Spanish GP – and Lotus’s impassioned development of a four-wheel-drive F1 car. An unconvinced Rindt flatly refused to drive the thing. A convinced Colin Chapman dug his heels. And the team suffered.

Matra was also assessing a four-wheel-drive chassis, but Stewart and his boss/mate Ken Tyrrell viewed it as an interesting sideline rather than a battle plan. That’s why JYS was first out of the pits for practice and Lotus arrived late in the day.

It was Rindt, however, who grabbed pole, albeit by default. Stewart was two-tenths quicker when he clipped a dislodged piece of inside kerb, burst a rear tyre and spun backwards into the retaining bank at Woodcote. Forced to switch to team-mate Jean-Pierre Beltoise’s car and settings, he had to forfeit his best time and start over. Second fastest was a fine effort in the circumstances.

Rindt led Stewart into Copse – just – and it was obvious by the end of the first lap that this would be a two-horse race. Stewart replied under braking for Stowe on the seventh lap, only to be baulked nine laps later by, ironically, Beltoise, relegated to the unfamiliar 4WD because of Stewart’s accident.

Back in front, Rindt crossed the line first for the next 46 laps. Their dice, however, was never anything other than captivating and beautiful, both men scribing graceful arcs, trusting to their skill and mutual respect as they peered over the edge without blinking.

Stewart increased the pressure at two-thirds distance with a fastest lap just one-tenth slower than his qualifying mark. But Rindt didn’t falter. His car did. A rear wing endplate came adrift and the collapsing structure began to rub on a tyre. Stewart immediately pulled alongside his friend and rival to warn him, an action that suggested he had been holding something in reserve though he had been without a clutch since the start. Rindt knew only one way at this stage of his career: flat out. Stewart knew several ways.

Rindt returned to the fray after a 30-second stop to have the offending item ripped off, only to pit again when his DFV, low on fuel, stuttered eight laps from home.

Stewart’s Cosworth also fluffed towards the end – and the Scot switched calmly to his reserve tank. Tyrrell had decided not to swap engines despite the enforced car change and Stewart, therefore, had been 600rpm down with an older-spec engine. Consistency, from within himself and his team, is what made him the best since Clark. PF 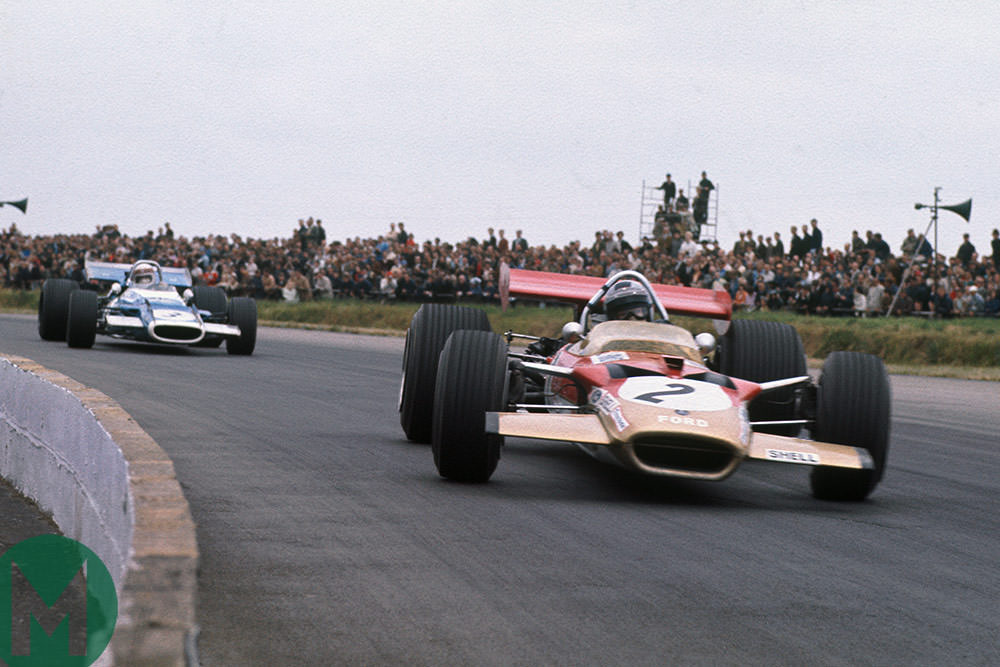