It was a race that had a little bit of everything as Sergio Perez took his maiden Formula 1 victory in Bahrain while George Russell experienced a heartbreaking ride through the night on his debut for Mercedes.

There was plenty going on up and down the pitlane at the penultimate race of the season as race seats for the future continue to be a point of contention for 2021 and beyond.

Here are some of the bits you might have missed during a manic weekend of racing.

“What happens next is not so much in my hands”

Sergio Perez’s heroic drive to come back from last on lap one to win in Sakhir was a cathartic victory for the Mexican, who admitted as much after the race.

He seemed reflective in the immediate aftermath of the win, resigned to the fact that his F1 future is entirely out of his control, but becoming a race winner was a deserved result for a driver who has shown consistency and pace throughout his career spent in the midfield.

Following the celebrations immediately in parc ferme and adrenaline subsiding, Perez said that no matter what happens beyond the end of the 2020 Formula 1 season, he was at peace with his time in F1 following his maiden victory.

“I hope I’m not dreaming, you know, because I dreamed so many years of being in this moment. Ten years, ten years it took me. Incredible. I mean, I don’t know what to say, you know.

“It just gives me a bit more peace with myself to be honest. What happens is not so much in my hands at the moment, but I know and I want to keep going.”

Many had predicted that Perez would become a grand prix winner much earlier in his career following stand-out performances such as the 2012 Malaysian Grand Prix in which he finished runner-up to Fernando Alonso, but it was a popular result on Sunday night for a driver without a drive he surely deserves for 2021.

Perez might be resigned to a year out of F1 next season but several scenes throughout the Sakhir GP weekend suggests Red Bull’s 2021 plans might not be settled just yet.

Albon’s disappointing performance throughout the weekend could not have been timed worse as Perez secured his first F1 win, and patience may be running a little low at a team that has been brutal with its young drivers in the past.

A premature exit in Q2 for the Anglo-Thai driver elicited a shake of the head from team principal Christian Horner, who had defended his driver in the build-up to the weekend.

Horner confirmed last week that no decision on its second seat would be formalised until after the Abu Dhabi Grand Prix and that the team was eager to see Albon succeed. He also added that Perez was not out of the running just yet.

Could the brief conversation in the paddock between Perez and Dr Helmut Marko on Friday following FP3 have been something more than a quick catch up ahead of qualifying?

The eyes at the start were all on George Russell as he took the lead from Valtteri Bottas, but further back, Lando Norris was wasting no time in making up positions.

Having been sent to the back of the grid due to an engine penalty, Norris was quickly making places and was one of the big winners at the end of lap one.

With Perez’s contact with Charles Leclerc and Max Verstappen finding the barriers, Norris was up to 10th from 19th on the grid by the end of the opening tour.

A perfect launch on soft tyres split the two Williams’ off the line and Kimi Raikkonen’s spin out of Turn Three cleared the inside of the track for Norris to brake deep into Turn Four versus those around him.

He made up another two positions on exit as Alex Albon made brief contact with Kevin Magnussen and forced the Dane out wide, and a chance to sweep around the outside of the Red Bull into Turn Five to secure P10 was completed by the time the safety car was deployed.

Unfortunately for the McLaren driver, it was the peak of his night and he struggled to keep his McLaren in check over the following 81 laps as rivals hit their stride.

What does this button do?

He had dominated the opening phase of the grand prix and led well into the second stint from his vastly more experienced team-mate, but George Russell’s evening turned for the worst as the second safety car of the race was deployed on lap 63 to recover the broken front wing from Jack Aitken’s Williams.

Russell arrived in the Mercedes pit box but ran deep and overshot his marks. He revealed after the race that he’d forgotten to change the brake balance rearward after the safety car had been deployed leading to the minor error, but a breakdown in communication at Mercedes had catastrophic consequences. 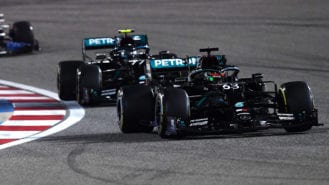 MPH: George Russell's feisty debut and why it went wrong

For 60 of the 87 laps George Russell was going to win as Lewis Hamilton’s stand-in at Mercedes. But fate had other plans. A safety car to retrieve the front…

It wasn’t the first time over the weekend a new environment threw him for a little bit. Following qualifying, he had to ask how to switch the car into ‘P-Zero’, but these were minor inconveniences on an otherwise flawless performance.

He’d also worn shoes that were a size too small for him to ensure his feet fit the pedals of the W11, but sacrificing size 11s for a chance of victory was no issue for him.

None of these though affected his race in any meaningful way. He had delivered a stellar drive in a car that he didn’t fit into properly and was well on the way to victory prior to the ensuing chaos in the pits.

It was a quiet debut for Pietro Fittipaldi in comparison to the other deputising drivers in Sakhir, but the 24 year-old put together a quiet race to make the chequered flag unscathed.

As George Russell experienced a heartbreak at the front and Jack Aitken suffered a spin, Fittipaldi notched up vital laps ahead of his second race for Haas next weekend, which will have done his confidence a world of good.

It was always going to be a difficult night for Haas around a circuit with three straights, but he kept himself out of trouble and made no mistakes to take himself out of contention.

“I’m happy to have finished my first grand prix – that was the goal. I had a good battle at the end with Jack (Aitken), and I had Kevin (Magnussen) in front of me as well.

“It was good to get some action in there. My pace was quite good from mid-race through to the end. At the restart I was trying to fight, but I was conscious at the same time that the goal was to finish. I’ve learned a lot for my next race, that’s the most important thing.

“It’s very difficult nowadays to make it to Formula 1 but I can say I’ve finished a Formula 1 race. I’m thankful to the team for the opportunity.”