You’ll have heard about the Ferrari fuss with ‘Mission Winnow’. Yet Formula 1’s relationship with tobacco sponsorship was difficult from the very start… 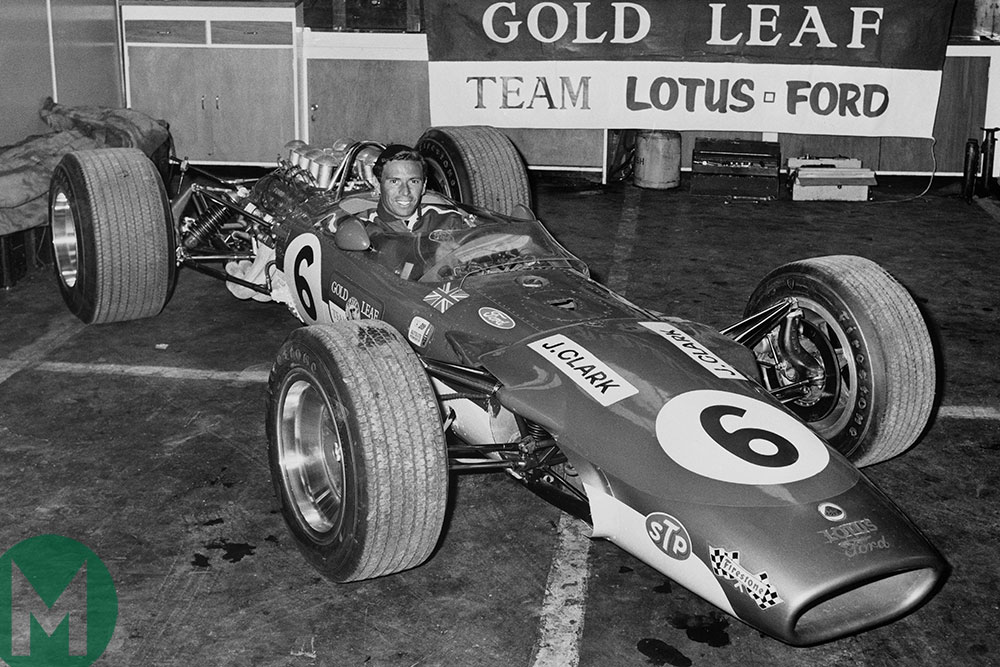 Winnow, verb: blow air through (grain) in order to remove the chaff; examine in order to identify the most valuable or useful elements.

Australia’s advertising authority has reportedly undertaken the latter exercise and so Ferrari will head them off at the pass in Melbourne by removing its vectoring symbol of ‘science and change… that can distinguish fiction from reality.’

No amount of gobbledegook nor matte grey paint – replacing last season’s white – can disguise the resemblance between Mission Winnow’s logo and Marlboro’s chevron (with or without barcode).

And no wonder: both are Philip Morris International brands.

That Mission Winnow might not be a brand is more difficult to grasp.

What is becoming clearer no matter how you dress it is that Formula 1 is drawing on fag money again.

Not that it’s ever gone away entirely. Though tobacco advertising was phased out over a five-year period from the end of 2001, PMI has continued to back Ferrari ever since.

For Formula 1 at its sharp end remains a powerful marketing tool. Ask the middle-aged man in the street about John Player Special and chances are that he will recall a deal (with Team Lotus) that lapsed 32 years ago.

Down the current grid, however, the intake of replacement blue-chip sponsors has been of neither the predicted multitude nor anticipated magnitude.

That $350 million – not accounting for almost 20 years of inflation – continues to burn a hole in F1’s pocket.

Which is why McLaren – for 23 seasons from 1974 a beneficiary of Marlboro’s largesse – is hoping for ‘A Better Tomorrow’ in 2019 thanks to British American’s slightly less nebulous promotion of “reduced-risk products” of “tobacco and nicotine choices”.

More: How F1 picked up the habit

I am not swiftly to sympathy for the tobacco industry but for sure the alcohol and fast-food lobbies are for now sheltering in the shadow of this big ad wolf.

Plus there are reckoned to be more than a billion smokers out there still. That’s impossible and, for both good and bad reasons, unwise to ignore.

There is a moral issue here but constructing a legal framework around it will take time and money and rest on two fundamentally amoral constructs: a huge industry chasing mega bucks and tightly knit teams chasing the next tenth.

They were simpler times when non-smoker Jim Clark, winter tan burnished by recent spells in California, South Africa and now New Zealand, beamed for the camera from his freshly painted Lotus 49T in January 1968.

They would, however, become more complicated almost immediately.

Team Lotus had in some eyes prostituted itself by swapping a national racing colour – albeit with snazzy yellow stripe – in favour of the red, white and gold of its groundbreaking commercial partner.

There was nothing illegal about this. The FIA’s Commission Sportive Internationale had towards the end of 1967 approved such activity in response to the official withdrawal from racing of the likes of Esso, a long-term albeit low-key supporter of Team Lotus. 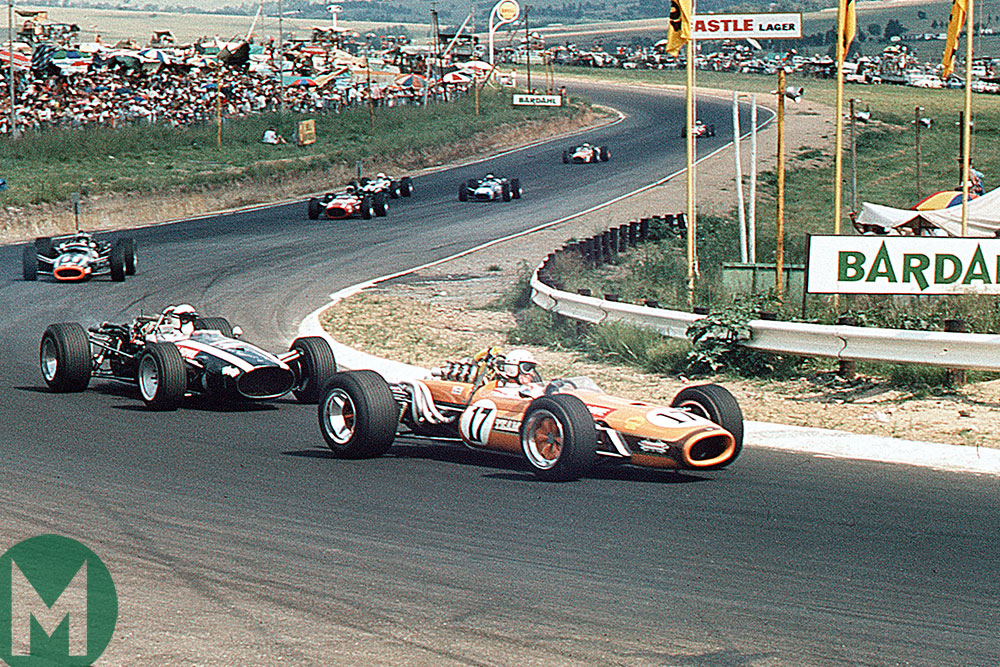 But there was plenty of twittering disquiet – spoken not electronically transferred – when the new-look 49T, its scheme applied by a local Ford dealer and barely dried, arrived at Christchurch’s Wigram Airfield for the third round of the Tasman Series.

Clark had three weeks prior, on New Year’s Day indeed, won the South African GP – the last of his 25 world championship victories and the last also for the green-and-yellow.

Further down the grid at Kyalami had been Rhodesian racers John Love and Sam Tingle in respectively Repco-powered Brabham and LDS vivid in the colours of the Gunston cigarette brand. Not that anybody took much notice.

The same had been true when Al Gordon started from the middle of the front row at Indy in 1935, his Weil-Miller sponsored by Cocktail Hour Cigarettes.

This Gold Leaf/Team Lotus tie-up, however, was knottier given the height of its profile and spread of its reach: F1, Formula 2 and international GTs. (Plans to run ‘works’ Elans in club racing were shelved.)

Imperial Tobacco boss Geoffrey Kent insisted that there was a patriotic element to it given that Colin Chapman’s squad was a rare example of British sporting success at the time.

Motor sport’s expensive, glamorous and racy image was a key selling point, too, in the bid to shed Gold Leaf’s somewhat stuffy image and take it upmarket.

(Its untipped version had been dropped in 1967 presumably for a better tomorrow. And Imperial’s downmarket No6 brand had sponsored the UK’s national autograss championship.)

Though the fit was obvious, the path to it was random: former chief mechanic Dave Lazenby, now at Lotus Components, was seeking a sponsor for its Group 4 Type 47 GT Europas and of one his mechanics had a girlfriend who worked for the PR firm that handled Imperial.

The deal was sealed almost immediately when Chapman and Kent, suave charmers both, were introduced.

It helped for now – and forever – that the resultant livery was as stylish as the world’s best driver: Clark dominated at Wigram to put his Tasman campaign back on track after retirements from the first two races.

The bigger talking points the following weekend at Invercargill for the Teretonga International were the chopped helicopter blade mounted above the gearbox of the Lotus – until an aerated Chapman by long-distance call ordered its removal – and the rare error that cost Clark victory. 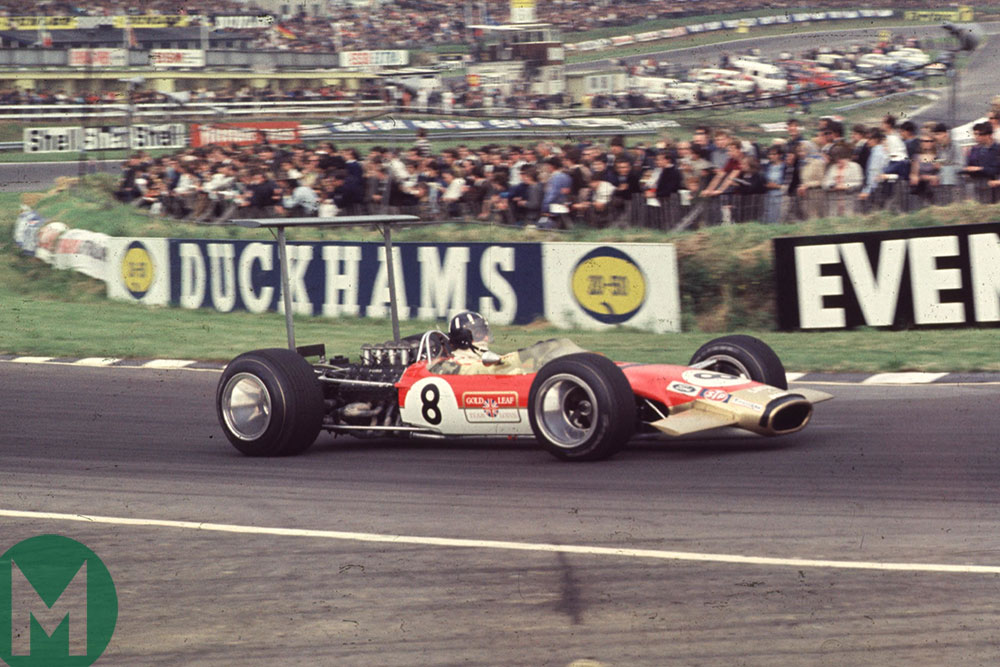 Aussies, however, are generally less amenable to Pommie peccadilloes than are Kiwis and so the paddock gate was shut in Clark’s face at Surfers Paradise in February.

It wasn’t just Lotus’s flashy new threads that had contravened local rules; so too had straitlaced BRM in appending Owen Racing Organisation along its cars’ flanks.

Both sat out the preliminary race as Clark and Graham Hill, flown in to contest the four rounds in Australia, argued against £50 fines for misdemeanours not of their making.

Compromise was reached – fines paid, regs amended, and ‘Sailor Boy’ roundel redacted by sticking tape – in time for Clark to score the first of three consecutive wins that would take him to the title.

But what was dismissed as colonial backwardness would by March reach swinging Britain: Hill was black-flagged during practice for the Race of Champions at Brands Hatch in order that his sailor could be blacked-out.

At the same venue’s British GP in July a groovy Union Flag roundel had replaced this salty old sea dog. (This is not a reference to the redoubtable and talented Mr Hill.)

But by then all genuine innocence had in any case been lost in the woods of Hockenheim and tomorrow, therefore, could only be better. Albeit, for many and still to this very day, never again as good.