Just 12 points lie between Max Verstappen and Lewis Hamilton at the top of the F1 championship table, as the season approaches a lip-smackingly close run-in.

With five races to go, there’s every possibility that the title will go down to the wire between Formula 1’s most successful-ever driver and his young challenger.

Verstappen led Hamilton home in Texas and the pair moved further away at the top of the points table.

Ahead of the United States Grand Prix, seven drivers were mathematically in contention for the championship. Now there are just three: Verstappen and Hamilton. Along with Valtteri Bottas.

Asked who he was tipping for this year’s title at the Russian GP, Bottas reminded journalists that he was still in contention. He bagged a maximum 26 points from the following race in Turkey but failed to build on that in America.

The Finn is now 102.5 points behind the leader. It’s a deficit that would take some mighty performances and a huge helping of luck to overhaul. The chances of Bottas pulling off one of F1’s greatest upsets before he departs Mercedes for Alfa Romeo is now highly improbable.

Between now and the end of the season, Bottas would have to out-score Verstappen by an average of 20.5 points per race and team-mate Hamilton by 18.1 to overhaul the current gaps heading into the United States Grand Prix weekend. That’s the equivalent of winning each race — with the fastest lap — while his competitors finish seventh or lower. 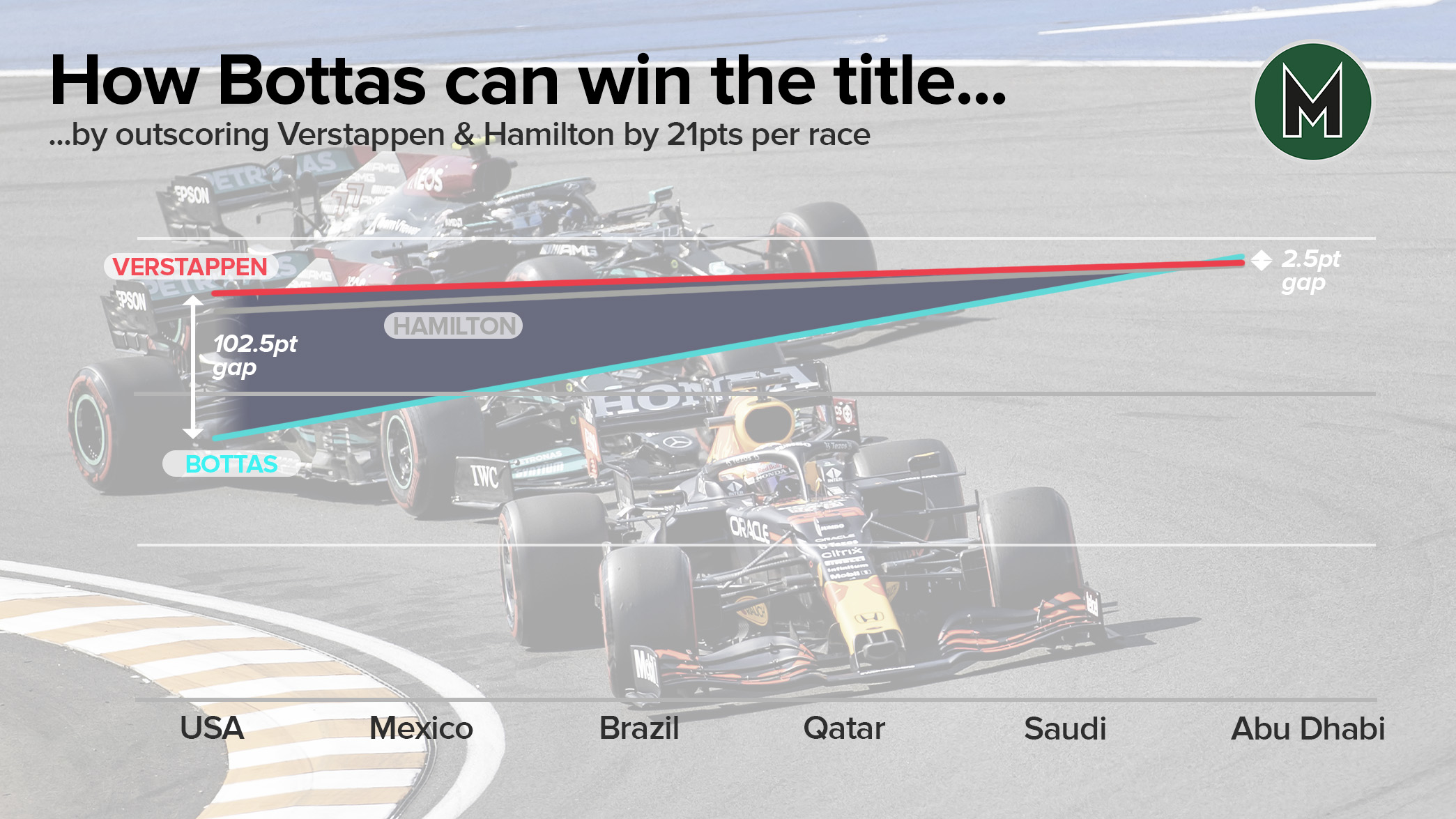 File it into ‘Not gonna happen’? Well, probably. Bottas has just a sliver of hope: Verstappen and Hamilton have been involved in three wheel-to-wheel battles since the British Grand Prix and two have ended in a cloud of shattered carbon fibre. Firstly for Verstappen at Silverstone and then for both of them at Monza.

Verstappen ran off track at the Circuit of the Americas to avoid a third clash, but if the lead pair take each other out again (and again and again) then Bottas should be well-placed to take maximum points that would close the gap to the top. As we said, a sliver of hope.

But there’s also the prospect of Covid. Hamilton missed a race at the end of last year, and Kimi Räikkönen has shown that the threat remains, missing two races this season. If either of the championship leaders test positive in the tightly-packed season run-in, then the enthralling prospect of a title fight that goes down to the wire is probably over. But it would enhance Bottas’s prospects.

Reliability is an issue that could benefit or hobble the Finn. It’s a real concern for Mercedes as the season reaches its final stretch, with engine failures already this season and questions over whether Hamilton will need another power unit, with the accompanying grid penalties.

But breakdowns are equally a worry for Bottas himself, who has taken two fresh engines since the summer break.

At the same time, Verstappen’s Red Bull is charging on. He’s only finished off the podium on four occasions; two of those coming after contact with Hamilton at Silverstone and Monza.

All the talk is likely to remain hypothetical though. There’s nothing in Bottas’s history that suggests anything but luck will win him the title. Last season, Bottas failed to take a single win in the final six races, finishing off of the podium on three occasions and finishing as runner-up in the others.

Since joining Mercedes in 2017, Bottas’s record in Mexico is 2nd, 5th and 3rd and in Brazil his record is 2nd, 5th and a retirement. His record is better in Abu Dhabi with one win and a second place but two non-podium finishes drags his average down at Yas Marina.

Over the course of this season, Verstappen has outscored him by just under 5.4 points per race and the most likely scenario is that this trend continues, which would drop Bottas from the title race after the next grand prix in Mexico.