At 36 years old, Lewis Hamilton is approaching the end of his Formula 1 career, so there is a huge amount of intrigue surrounding the length of the latest contract he has finally signed to race for Mercedes this year.

Despite team members disputing the fact that negotiations were dragging on, Toto Wolff himself admitted today that they had done exactly that this winter and Mercedes will want to avoid a repeat next year. He even went as far as to say there will be a much earlier start date for the 2022 negotiations.

So why are we in a position where a one-year contract has been signed by a seven-time world champion that actually raises more questions than it answers?

All it resolves are any potential doubts that Hamilton would be on the grid this season. It was never in question within Mercedes, but the only way to quieten speculation is to get the deal done. 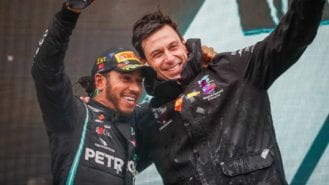 Hamilton's one year deal: Will he retire or race on like Schumacher?

But it’s a short-term deal in every respect: everyone will be in a very similar position in only a few months’ time, because it only covers this current year.

Now, this is where I contradict myself slightly and say Hamilton and Mercedes should be allowed a bit of breathing space, even if it doesn’t make the deal any less interesting to dissect.

As 2020 wore on, questions about the new contract grew louder and louder, and the team ended up in a bit of a hole expecting to have it all cleared up long before now. That’s directly due to Covid-19, not only because of the way it has impacted on the ability to travel and have in-person meetings, but because Hamilton himself suffered from the virus at the end of last season.

“The [mention of] curveballs were meant for the situation with him having Covid in the time when we expected to sit down face to face in Bahrain,” Wolff said, referencing recent comments regarding why a deal was taking a while to conclude.

“We left it very late, we wanted to discuss the contract at the end of the season between the Bahrain races and then obviously Lewis didn’t feel well and in the end we started our conversations just before Christmas. It was important to get it done as soon as possible and in that respect we thought, ‘let’s postpone the discussion about 2022 and onwards to a later stage in 2021.’”

So given the fact that there was such clamour for Mercedes to announce a deal, it would be a little unfair to then be critical of what has been announced. By addressing the immediate need to have a contract in place in the short-term covering 2021, both sides can now take even more time without external pressure (if they feel it at all) to look beyond that.

But it does draw a line in the sand that reflects uncertainties in the world that extend beyond Hamilton’s own career path. 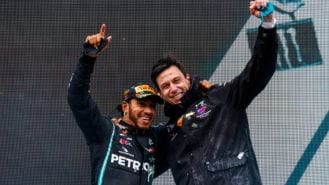 Previously it’s fair to say that Hamilton appeared in control of his own destiny in the sense that he was likely to choose when he wanted to turn his full attention to something else. He’s already a published music artist and fashion designer, so there are multiple avenues available to him that he’s interested in, but it felt like that move would only come when he was comfortable with what he had achieved in Formula 1.

Then 2020 happened, and it has just confused things slightly. There was a much wider battle going on that Hamilton was central to, as he looked to increase diversity in motorsport and lend his voice to the fight against racism.

“There was a moment that I thought that when I leave, I want to leave on top and that will be it,” Hamilton admitted at the end of last season. “But what I’ve realised particularly this year, is I think I have a responsibility to the F1 community for what it has helped me create to push for that change.”

Hamilton’s future career path and exit from the sport is perhaps not as clear as it was. And the sport itself is undergoing a transformation right now. New financial regulations have come into force this year, there is a levelling of the playing field in terms of wind tunnel and aerodynamic testing time (based one where each team finished last season, so Mercedes gets the least and Williams the most) and then there are the 2022 technical rules that will deliver vastly different cars.

The previous deal Hamilton signed was a two-year one covering 2019 and 2020, taking him up to the end of the last generation of car and allowing him to take stock at that point. Today’s announcement retains that position, and also lets Mercedes look at its driver pairing as a whole come the end of the year should Hamilton decide it’s time to move on. 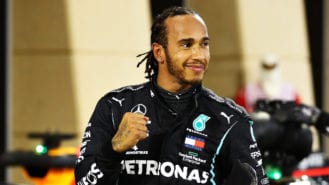 Lewis Hamilton has re-signed with Mercedes for the 2021 Formula 1 season after months of speculation. The reigning world champion has agreed a one-year deal with the team, the first…

Of course, if he wraps up an eighth drivers’ championship then he would bow out as the most successful driver ever. Or he might still have that achievement to chase if this year doesn’t pan out as expected. Or the new regulations might motivate him to want to stay.

As a driver who says the competitive desire will never leave him but that 2020 taught him of the importance of making memories with friends and family rather than material gains, Hamilton probably doesn’t know himself what his priorities will be in 12 months’ time. And that’s not an unusual position for a driver to be in during the latter stages of their F1 career. The Briton is 36 now, after all.

Add all of that to the global uncertainty caused by Covid-19, the way we currently live our lives and how that might still change as we emerge from the pandemic, and there are question marks all over the place that extend far beyond simply driving an F1 car.

So Hamilton and Mercedes are happy to put another one above 2022 and hope the answer is easier to find at a later date.

Which country has produced the most Formula 1 world champions?