The FIA technical directive issued during the Barcelona weekend, regarding fuel flow, targeted a practice believed to have been used by Ferrari in the first four races of the season that momentarily allowed a flow more than 100kg/hr to go through the engine’s injectors. The maximum fuel flow limit of this formula is defined at 100kg/hr and this is controlled through an FIA-supplied fuel flow meter. 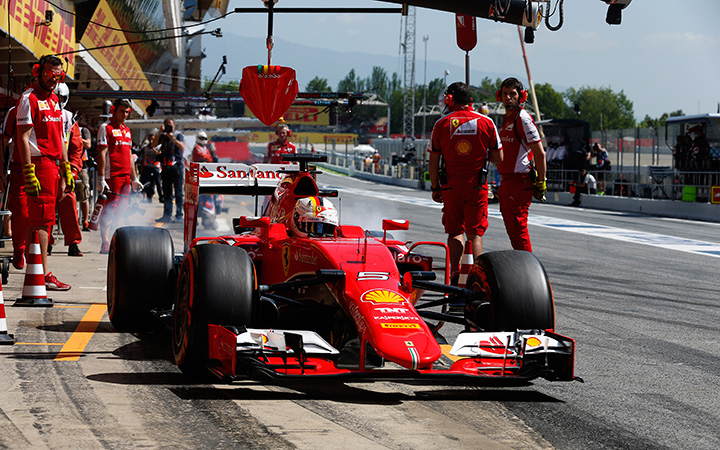 It was for exceeding the flow through this unit that Red Bull fell foul in the very first race of the formula, Australia 2014, which led to Daniel Ricciardo being disqualified from his second place. Coming into 2015 it’s believed Ferrari had found a way of occasionally feeding the engine with more than that, on demand, while still not exceeding the permitted maximum flow through the meter.

How to engineer a system that would hold the excess when not on full flow, but feed it into the engine at maximum flow is not readily apparent, but the diameter of the piping could be used to manipulate it in this way.

However, there can still only be a total maximum usage of 100kg for the race, so any increase in flow would only have to be offset with a decrease in flow somewhere else in order to stay within the usage limits, surely? Actually, no. Because at most tracks the teams do not need to fill the cars with the full 100kg allocation, it’s quite common to have just 90-95kg in the tank at the start of the race.

The extra needed to feed a higher-flowing injection could be found from filling up to 100kg (though there would be initial lap time increases associated with the greater weight, albeit smaller than the gains from the extra power. Furthermore those weight-derived penalties would be diminishing as the engine burned up the fuel at a greater rate, but the power benefits would remain constant).

On Saturday evening in Barcelona the FIA issued a directive saying that once the flow was upwards of 90kg/hr, further increase had to be progressive, that no sudden spikes were permitted. But – to be clear – the technical directive was an amendment to how the FIA will judge an existing regulation, forthwith. It is not saying that such a practice was illegal – only that it would be judged so from now onwards.

But if the regulation states a maximum of 100kg/hour, how could it have been legal to feed the engine with more than that, you might ask? Because the regulations state only that the maximum fuel flow is 100kg/hour, and that it is measured through the flow metering unit. It does not specifically state that no extra flow can be derived from between the unit and the injectors. Obviously the intent of the rule was that, but was written without envisioning how an ingenious mind could get around such wording.

Ferrari’s average deficit to Mercedes (including its victory in Malaysia) in the opening four races was 8sec over a race distance. In Barcelona, with the regulatory amendment in place, it was 45sec, a swing of 37sec – or about 0.5sec per lap. The Ferrari-powered Sauber also had its least competitive race of the season in Spain. Conflating such things with the new technical directive is dangerous – the two things may not necessarily be connected.

The outcome of Barcelona was a double body blow for Ferrari in that it arrived with a massive aerodynamic upgrade for the SF-15T. Sidepods, floor and diffuser were all totally reworked – representing an extremely ambitious single upgrade in an era when wind tunnel time and CFD power is so restricted by regulation. Perhaps alerted by the fuel flow controversy, rival teams were questioning how Ferrari could have completed such a wide-ranging upgrade within such constrained limits on aerodynamic tools.

Could Ferrari possibly be using the wind tunnel time, additional to its own allocation, of a customer team? That was the competitive paranoia view. But maybe it’s just cleverer. Or perhaps it had some of these upgrades in the pipeline for a long time previously – and only brought them on stream when the final details were completed. A little bit like keeping extra fuel in the system until it’s needed…