With Lando Norris in the background, Stoffel Vandoorne’s seat at McLaren isn’t set in stone 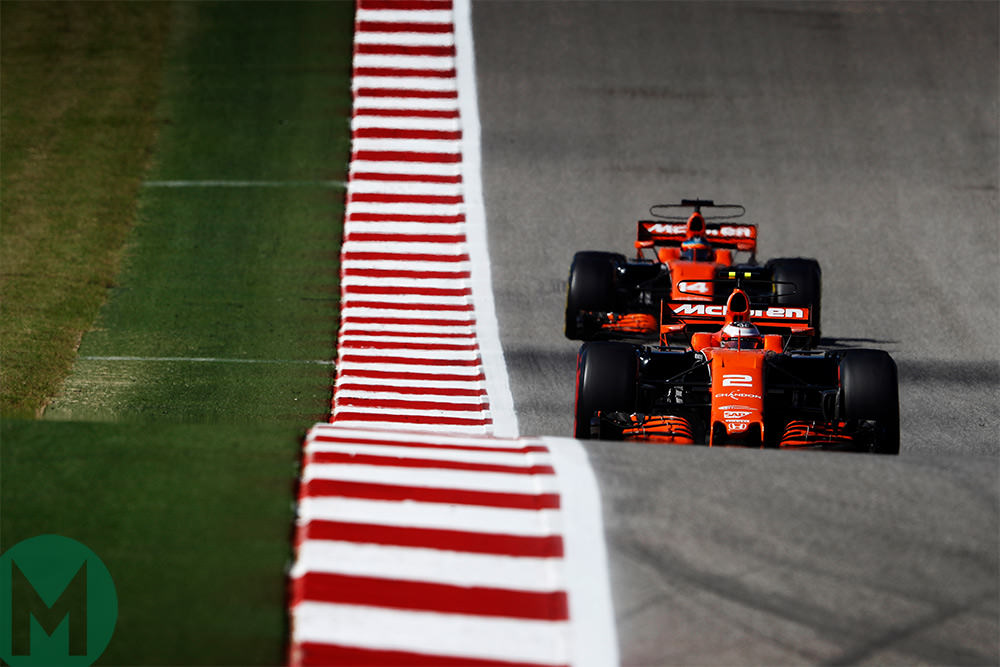 McLaren chief Zak Brown said he was very excited to have a competitive engine partner for its 2018 Formula 1 challenger, the MCL33. Even before the February 23 launch date, Brown talked up the team’s efforts, confirming that it was working hard on a Melbourne upgrade.

He’s a natural salesman, but it feels genuine – like he believes every word himself – he isn’t merely trying to convince others. He spoke too in glowing terms of Fernando Alonso and it’s remarkable how Brown is going out of his way to accommodate his star driver, with regard to his extra-curricular racing, reasserting his belief that this is absolutely the key to keeping his motivation at its highest.

“I’ve never seen anything like it,” said Brown. “He races or drives every weekend – half the time with a different name when he’s karting. He just wants to be in a race car. Racing keeps him fresh and focussed. Drivers lose motivation before age catches up. I’m not one who thinks you have to be 18 to be in F1, and I don’t think 36 is old. I think it’s all about motivation.

“These are his spare weekends and he’s choosing to spend them in a racing car. Any time you have a driver of his calibre and you can’t give him a car to compete at the front we all feel that pain. He’s family and we get excited by his success. Once you get past the physical requirement, half this game is mental and I think we’re getting the best out of him because he’s doing what he wants to do. It’s mutually beneficial.”

But in terms of the driver line-up beyond this season, he admits there are many ways his ‘three-into-two’ conundrum of Alonso, Stoffel Vandoorne and contracted junior driver Lando Norris could play out.

Although Alonso is embarking on the first year of a ‘multi-year contract’ with the team, it’s widely believed that he has negotiated an opt-out clause for 2019, just in case. Having suffered three consecutive seasons with the uncompetitive McLaren-Honda pairing, he cannot, at 36, afford to stick around if Renault engines do not transform the team’s competitiveness this year. Family or not. Next year the driver market should open up, with potential seats at Mercedes, Red Bull and Ferrari up for grabs.

But, in the event of Alonso staying and seeing out his contract in an increasingly competitive McLaren, who drives alongside him into 2019? For Stoffel Vandoorne it must be difficult to feel as if he’s not being squeezed from both sides – the building momentum of Norris’ reputation (which was not checked at all by a starring performance at Daytona alongside Alonso), pushing him up against the colossus of Alonso.

“There are a variety of different scenarios but I haven’t set any expectations,” said Brown. “It would be predicting too early. But we know we’re in a great position with three great drivers and two seats. It’s a luxury situation to be in.”

Vandoorne’s reputation after his dominant GP2 championship in 2015 was hot. He could seemingly win races from anywhere. Renowned driver coach Rob Wilson says he has ‘the best car control I’ve ever seen – of anyone.’ He’d impressed on his short-notice F1 debut in 2016, standing in for the injured Alonso in Bahrain. He not only out-qualified Jenson Button and scored a point, but identified a key set up issue on the car. But, into last season, with the disastrous reliability of the Honda motor having restricted the car to a longest pre-season run of just 13 laps, Vandoorne was up against it. Contrast this to the thousands of miles of testing of other starring rookies in history such as Jacques Villeneuve or Lewis Hamilton.

“Stoffel was in a totally different situation from Fernando,” said Brown. “He was still learning some of the circuits. So, if we had an issue with the car, Fernando had 16 years of experience and could go, ‘Oh, I’ve only got three laps.’ Whereas Stoffel would be thinking, ‘I’ve only got three laps and I have to learn the circuit.’ I actually think last year will be good for his development, strangely. The pressure meant he had to be quicker to analyse the situation and make the most of it. He had the majority of the issues early in the year. He was very fast. We know exactly what was on what car and I think he was closer to Fernando than maybe the timesheets sometimes showed at certain times.”

By our reckoning, in the races where different specs did not make comparison impossible, there was a qualifying difference of just 0.175 sec (0.195 per cent) in Alonso’s favour.

From the Archive: Stoffel Vandoorne

However respectable that may be in the circumstances, he’s under pressure regardless – and Brown isn’t shy of laying out what’s expected of him this season: “He’s got to swap qualifying with Fernando – go evenly split with him, or thereabouts. Same thing in the race. He’s got to give Fernando a run for his money. I think any F1 driver knows everyone’s after their seat, not just Lando.

“Stoffel’s focussed, very physically fit and I think we’ll see some good stuff from him this year. He gets equal treatment even though Fernando gets lots more publicity. If you only have one new part it’ll go to your more experienced driver. That apart, they get the same focus, the same chance and I try to move around from garage to garage. He’s got every bit as much support as Fernando. He’s really mature, he’s in a good place, very strong in the head.”

So in the assumption that Norris sets the tracks alight in his F2 season with Trevor Carlin’s team, all Vandoorne needs to do to keep his drive is perform to the same level as Fernando Alonso… F1’s not supposed to be easy and if you’re going to reach the top you’re going to have to beat the best at some stage.