It could have been the corner that changed the course of the title race. The door closed on Lewis Hamilton, but he went on to win the grand prix after a stewards’ investigation.

Although the incident was over in a split-second, the controversy raged for days over which driver was in the right, fuelled by an appeal over “new and significant” evidence.

In the end, Hamilton remained the victor of the 2019 Canadian Grand Prix and went on to win the title.

Sebastian Vettel was left to rue the error that saw him slide onto the Montreal grass, then recover to swoop back on track, cutting off the chasing Mercedes.

The familiar narrative, once again playing out this weekend after Hamilton’s clash with Max Verstappen at the British Grand Prix, began with Vettel’s mistake on lap 48.

There were 22 laps to go and, inside the stewards’ room, the heat was rising.

“It was pretty tense being so close to the end of the race,” says Mike Kaerne, one of the stewards in the room on that day. “There was a lot of pressure to make a very quick decision, given all the elements that we had to look at.

“It was a frantic pace — the wildest scene I’ve ever seen in the steward’s room that’s for sure. And I’ve been stewarding for 30 years. It was a real pressure cooker.

“Everybody was talking about particular points of it; we pull up regulations; ‘Let’s see this again’ and ‘What about from that angle?’ ‘Do we have the GPS tracks?’

“There’s a lot of discussion. And, of course, each one of the four stewards gets a chance to put their analysis of it forward. It’s very similar to a courtroom; back and forth situation.

“Emanuele kept getting messages and he was really upset”

“I think our decision was 10 or 12 minutes after the incident itself.

“Over the last couple of years I’ve reviewed the elements a couple of times. I’m still kind of uneasy about them really… a majority vote wins, right?”

Kaerne is a Canadian racer with 50 years’ experience, beginning the day after his 16th birthday when he entered his first oval race. He went on to compete extensively on circuits, to teach at racing schools and then to oversee events as a steward. He has also been president of the Confederation of Autosport Car Clubs in Canada.

Until Covid hit, he was a regular on the FIA’s stewarding rota for Formula 1. He has trained for the job with the FIA in Geneva; he has seen the vast data available to inform decisions; and he’s worked with top driver representatives.

In 2019, he found himself at the centre of the unfolding F1 drama in Canada.

In the room with Kaerne that day was Emanuele Pirro, the driver representative on the stewards panel, who had the same role earlier this month at Silverstone when Hamilton collided with Verstappen.

Within moments of issuing their verdict — a five second penalty for Vettel, which effectively ended his hopes of victory — the stewards were embroiled in the controversy; their phones bleeping into action.

“It was surreal,” says Kaerne. “I was surprised at the immediate reaction from some people. Some of the other stewards were getting text messages while we were still in the stewards’ room. Emanuele got some that were rather strange just after the penalty was announced.”

Vettel’s post-race reaction only fanned the flames; the Ferrari driver stormed out of his car and marched to his pit garage, then returned for the podium ceremony — stopping to swap the first and second place boards in the process so that the number 2 sat in front of his Hamilton’s Mercedes.

Former champions weren’t shy in giving their opinion either: Mario Andretti and Nigel Mansell were among those critical in public. Pirro was also getting flak direct.

“Emanuele kept getting messages and he was really upset,” says Kaerne. “I was quite surprised.”

The story was still making headlines two weeks later when the stewards once again convened for the appeal at the French Grand Prix. Kaerne was the only non-European official and so dialled in via video-link — a real novelty in the pre-Covid world. “At that time we weren’t really into the Zoom meetings,” he says.

Appeal hearings are where the mystery of Formula 1 meets the mundane; Ferrari arriving to argue their case for the penalty to be overturned with a Powerpoint presentation of data traces, telemetry and — bizarrely — Karun Chandhok’s analysis of the incident, broadcast on Sky Sports. 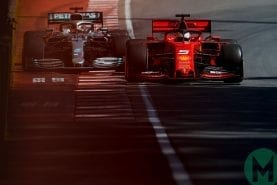 A great race "stolen" by the stewards? Full analysis from Montreal by Mark Hughes in the 2019 Canadian Grand Prix report Vettel rejoins "in an unsafe manner" Photo: Motorsport Images In…

To be considered, the evidence needed to be considered new, significant and relevant and the hearing decided that none of the six submissions qualified and threw out the appeal.

It wasn’t a great surprise: overturning a stewards’ verdict takes something out of the ordinary given the amount of information at their fingertips. “The technology that’s available is unbelievable. Star Trek to the max,” says Kaerne.

“All the radio channels; all kinds of telemetry and GPS; all the in the car cameras. It’s an enormous amount and they can be slowed down, backed up, stopped — all that kind of stuff.

“A lot of people that are not familiar with it don’t realise how much data and video there is. When they are negative about a stewards’ decision — ‘Oh l I don’t see how that could happen’ — well, that’s exactly it. You don’t see what the stewards can.

“The only simple decision is the penalty for speeding in the pitlane. None of the rest are”

“When you pull up an in-car camera, something that hasn’t been on TV, and compare it side by side with someone else’s in-car camera from the car behind, the stewards are able to see different angles than the public. Public outcry against a stewards’ decision is not always as well founded as the public thinks.”

That’s not to say that Kaerne is averse to some home sleuthing. When he’s not watching in an official role, he’ll still pause and rewind controversial moments.

“I always back up my DVR to look at where the driver’s looking in the mirrors and where the steering wheel is going,” he says. “That always gives you such an indication.”

Even so, he’s diplomatic when asked about his view on the Silverstone collision. “I trust the stewards made the right decision,” he says.

“The fact that Red Bull have asked for a review, obviously, they don’t. It’s interesting.”

The lot of a steward isn’t straightforward. Hamilton was given a 10sec penalty at Silverstone for breaching a section of the FIA’s International Sporting Code on driving conduct; an area that appears to offer plenty of room for interpretation.

“Causing a collision, repetition of serious mistakes or the appearance of a lack of control over the car (such as leaving the track) will be reported to the Stewards and may entail the imposition of penalties up to and including the disqualification of any driver concerned,” the relevant article reads.

“Sometimes it sounds like a simple decision,” says Kaerne. “The only simple decision is the penalty for speeding in the pitlane. None of the rest are. There’s always something to consider.

“Is that a correction or is it an aggressive manoeuvre? You have to make those little decisions in order to come to the big decision.”

There are also the implications of imposing a championship-affecting penalty to block out. “You’re trying not to think of that as a steward,” he says. You are supposed to be focused on the facts of that incident, not who it is going to affect or how it’s going to affect the outcome of the race.

“I know everybody by their [race] numbers: it’s 44. It’s not Hamilton. You try and keep unbiased. You’re trying to be so unbiased, objective, so that you boil it down to the nitty gritty — to the bare facts so that we determine this is what happened. And therefore, the penalty that should be applied.”

That’s not to say that a unanimous decision is always applied, however, and there are strong personalities on the panel of stewards — not least Pirro himself.

“Emanuele is a very nice man,” says Kaerne. “He has a ton of experience. He’s very confident in his assessments and judgments and sometimes very vocal about his assessment. He’s an interesting individual to work with.

“Of the driver stewards I’ve worked with, he’s certainly the most dramatic and he emphasises his points very well. And, you know, it does make it interesting. I’m an ex-driver, not Formula 1 and so I see a lot of it from a driver’s standpoint. But, having an ex-F1 or that-level driver on the stewards’ panel definitely gives us a bit more insight.

“I think that those tools given to the stewards and combine that with the combined experience of all the students that I’ve ever come in contact with feels like a pretty fair, equitable panel.

“Some people don’t understand that, but for somebody is kind of into the regulations and rules and the kind of organisation of that, it’s enjoyable.”